This here is what most of us would consider an interesting Win Expectancy Graph, courtesy of our friends at FanGraphs: 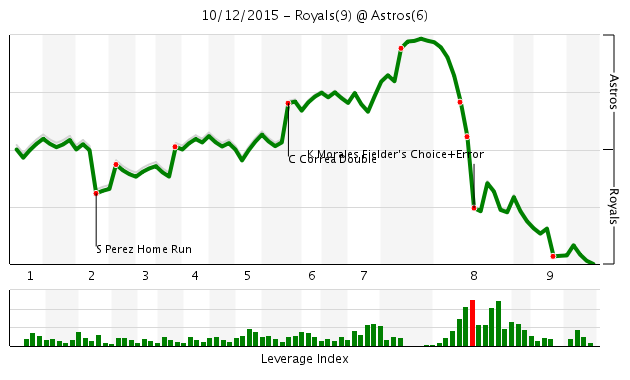 Look at all those line segments! Some go up, some down. Hooboy. What a game. Love it. Love baseball. Love graphs. Love you all. But prepare to have your mind blown: I don't think that graph really captures just how bananas this game was. What we need is…

What that graph up there shows is this: The Royals were trailing in the seventh; then, with two outs, Terrance Gore was thrown out trying to steal third. Then the Astros scored three more runs in the bottom of the seventh to seemingly put the game away. It's pretty much a straight line from that caught stealing up to the high 90s, as you see. Then the Royals scored a bunch of runs in the eighth, and took the lead, and it's pretty much a straight line down into the Astros' grave. The game was not actually this straight. So just this once, I'm going to try to build a better version of that graph up there. This one will respond not to every PA outcome, but every single microaction that occurred during every plate appearance. Or, closer to it.

That means that, for instance, a home run won't just be a home run; it'll be separate win-expectancy shifts for the progression of the count, the location of the pitch before the batter makes contact, and the home run itself, to give an example. All of the following is based on my estimate of the home team's win probability, informed by (to the extent convenient and possible) actual, factual probabilities: The actual win expectancy for each new batter, adjusted within plate appearance using actual win probabilities for various outcomes, actual likelihoods of each outcome in in-progress plays, and lots of me filling in the blanks with my own, honest good-faith assessments. Will be doing my best here.

First, your graph, which includes 63 different points for the top of the eighth inning. Then I'll expound upon some of those new spikes and valleys, which is really just a way of getting into what this is: The story of Game Four. 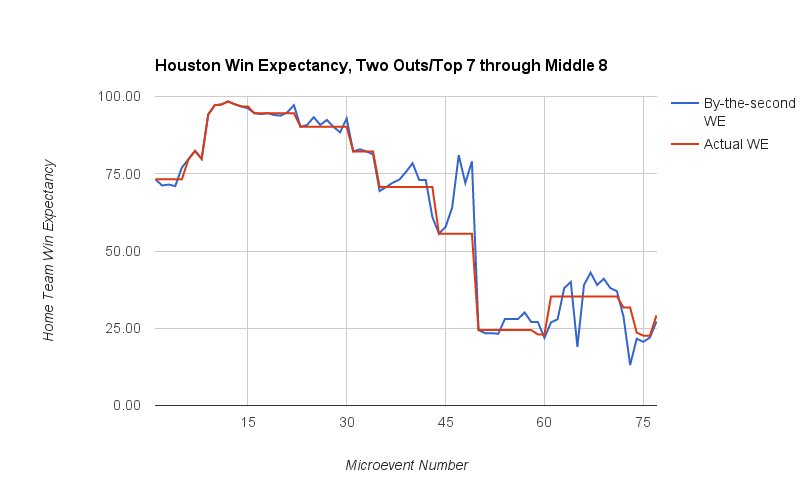 So, it didn't go straight down. In the middle of this meltdown, the Astros had small victories–which, ultimately, consistently, tragically, turned into defeats every time. Now: The story.

Microevent no. 1: With two outs in the seventh, Terrance Gore gets bored. 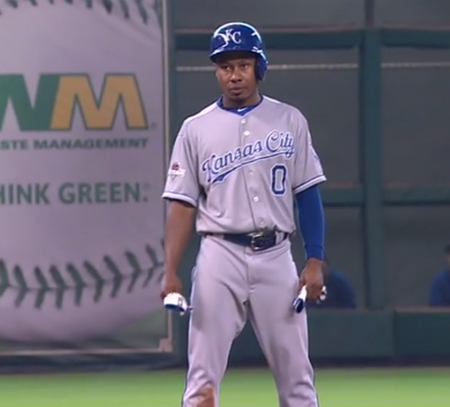 So, even though there are two outs, he decides to take third. Breakeven success rate for stealing third is around 90 percent; Gore's success rate as a professional (including steals of second) is 92 percent, and I'm pretty well convinced that those 8 percent are a clerical error, or some kind of hustle he's running to get us to bet him the rest of our money. The moment he decides to go, we give him credit for most of a steal, and the Astros' win probability goes down by… about one percentage point. Much will be made of this play, and for good reason–you'll see, if you don't already know–but nobody steals third with two outs for a reason: It doesn't do that much. 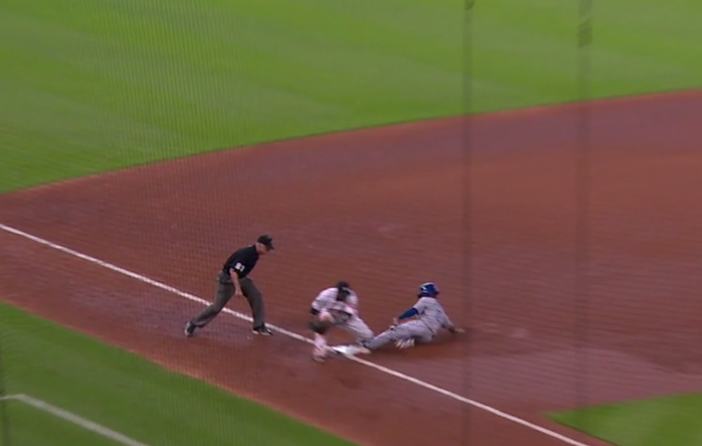 Can't get any more safe than that! 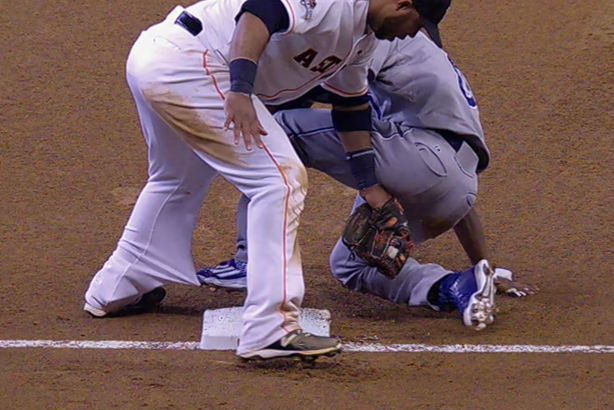 I just noticed that Terrance Gore's spike is caught on Luis Valbuena's pants. I thought all along that Valbuena had nudged his leg off the bag—it's didn't have the typical off-the-bag-a-millimeter-for-a-millisecond look that a lot of these overturned calls have—but now it looks like Valbuena's leg might have lifted Gore's foot off by the spikes. What a break! Anyway, you already have an opinion of this play, so instead of a lecture I'll just tell you that the Astros' chances go up to 79.7 percent.

The pitch down the middle would have improved the Royals' odds more on its own account, except that Rios has slugged .300 on pitches directly down the middle this year. He had to prove to us that he could capture that extra win expectancy, and he did: 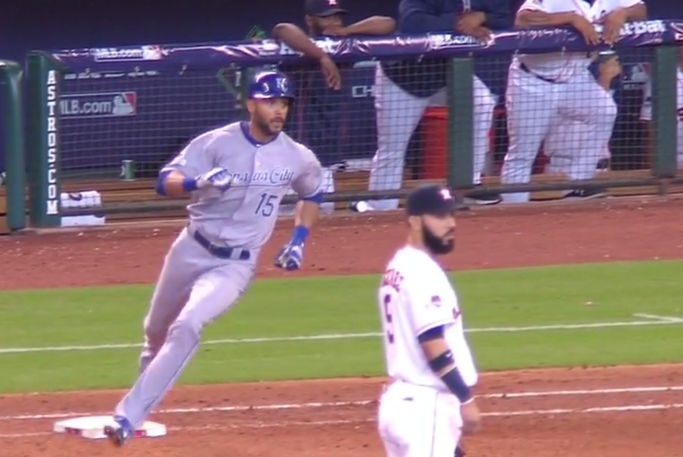 Microevent no. 22: Alcides Escobar swings at a terrible pitch, a slider that looked worse than it'll look in a still: 97.2 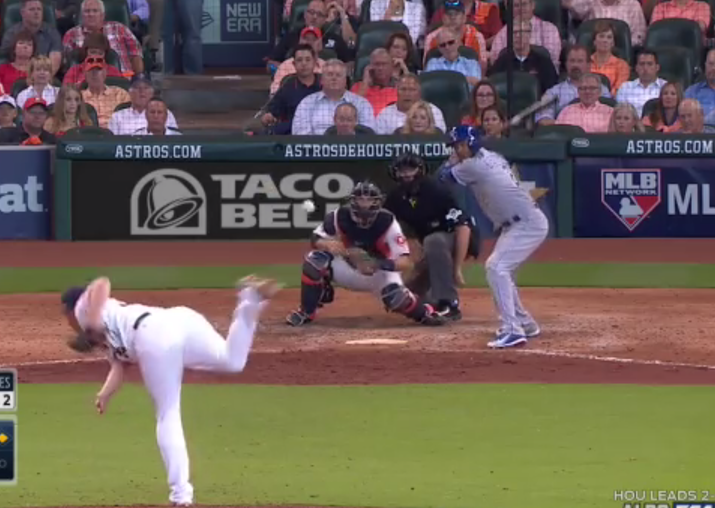 Microevent no. 23: Taps a grounder weakly up the middle for a single: 90.2

Microevent no. 25: Ben Zobrist considers batting with his eyes closed: 93.3 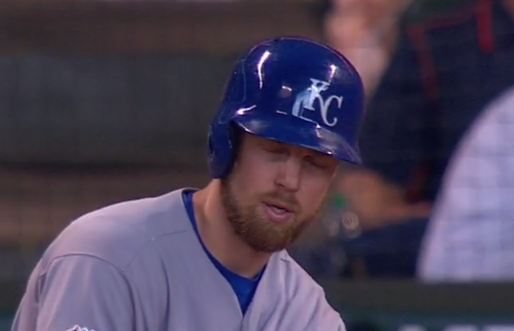 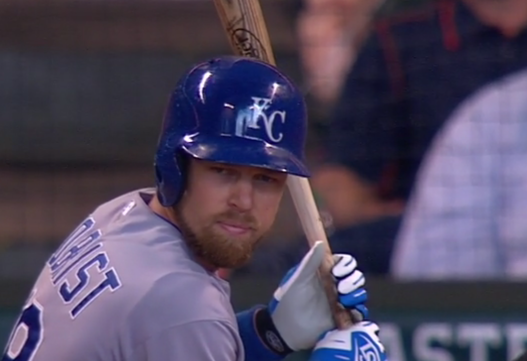 Microevent no. 29: Gets a hanging breaking ball in the middle of the zone: 88.4 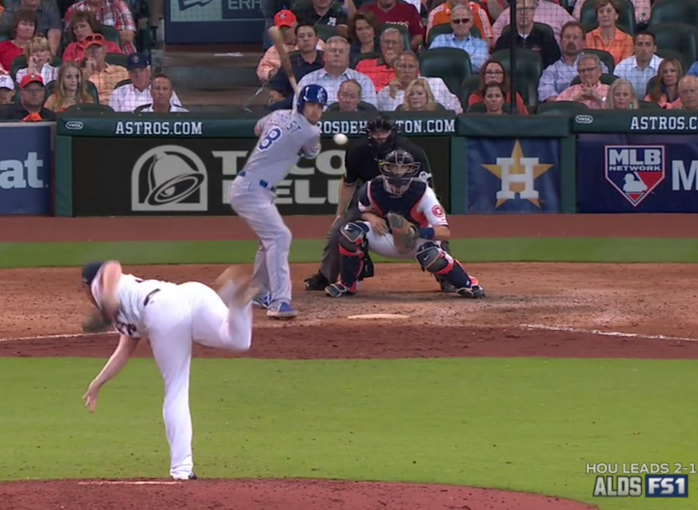 Microevent no. 30: But can only flip a little line-flare into center field, where Carlos Gomez seems likely to catch it: 92.2 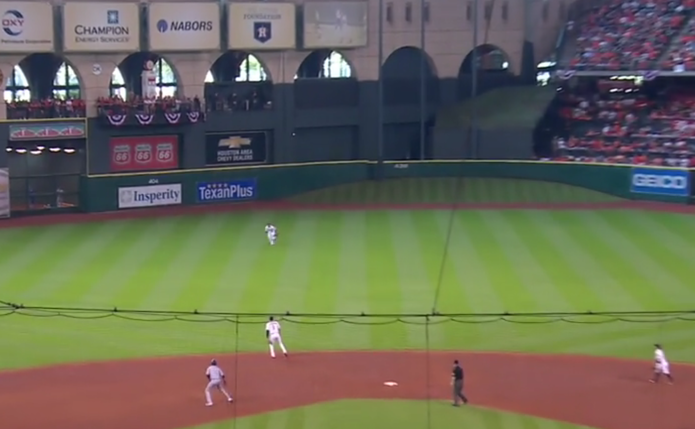 This is the moment that the game feels suddenly in play. For one thing, the tying run is up, and it's the middle of the order. For another: It feels for the first time like the Astros have made a mistake, and the mistake feels like a real opening. There was a mistake throwing a pitch right down the middle to Rios, but it was the first pitch of the inning to the no. 9 hitter; it was a "mistake," I guess, letting Alcides Escobar ground weakly up the middle, but it was on the pitcher's pitch and there's no defending certain groundballs. Here, though, on this single by Ben Zobrist, the Astros have chosen to let an injured person play center field. That's super cool when injured person hits home runs, as he did earlier in this game; I'd play Gomez, too. But I'm pretty sure that either this is a very misleading camera angle or this was a ball Gomez catches if he's not either nursing something or afraid of reaggravating it. 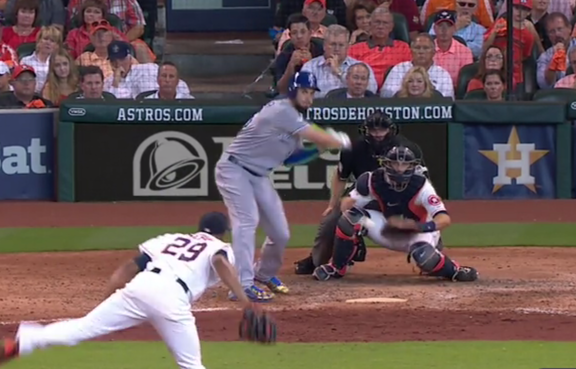 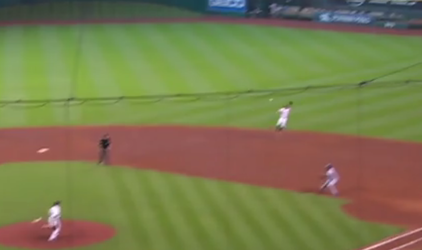 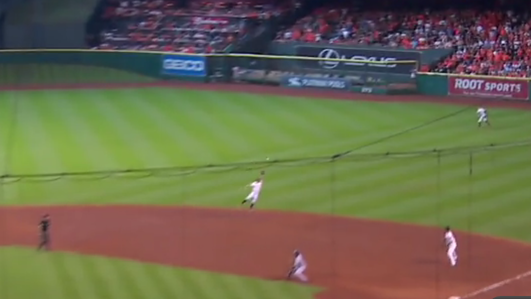 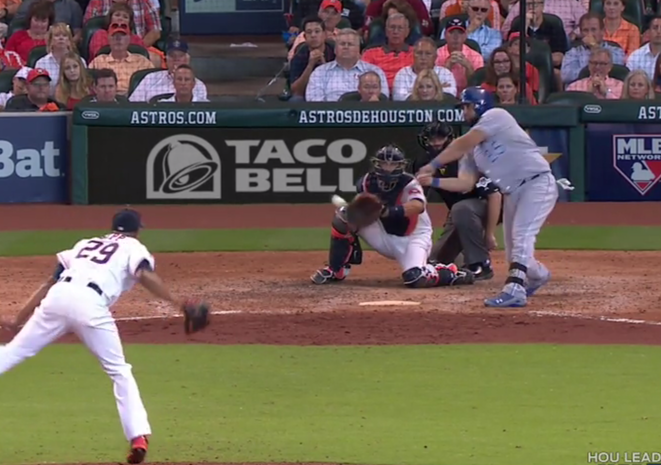 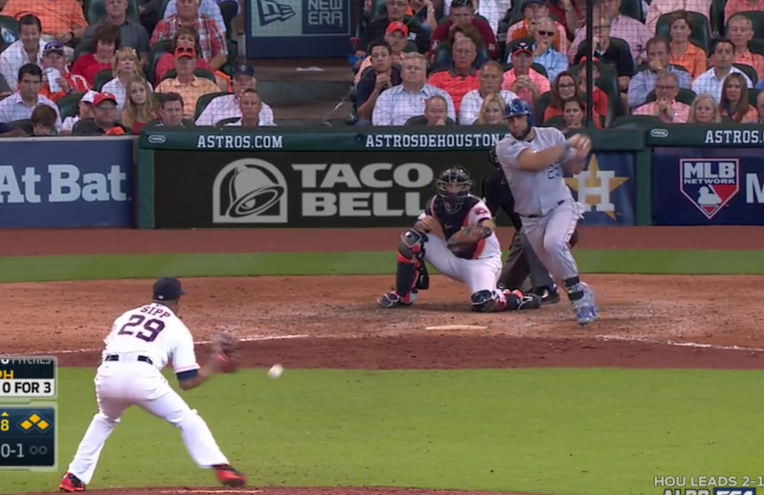 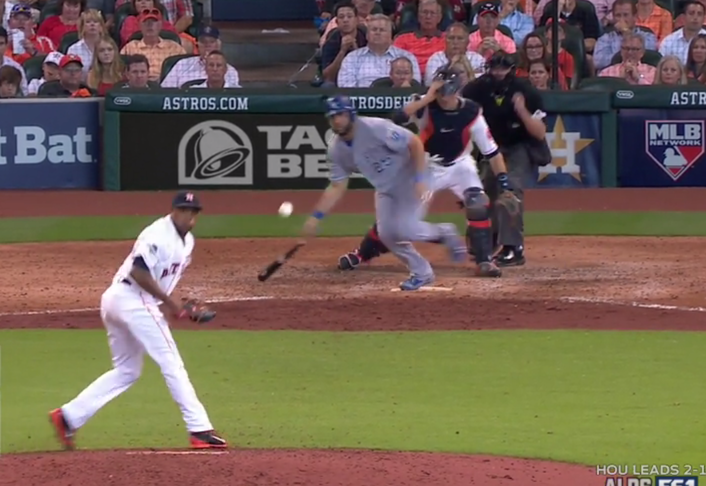 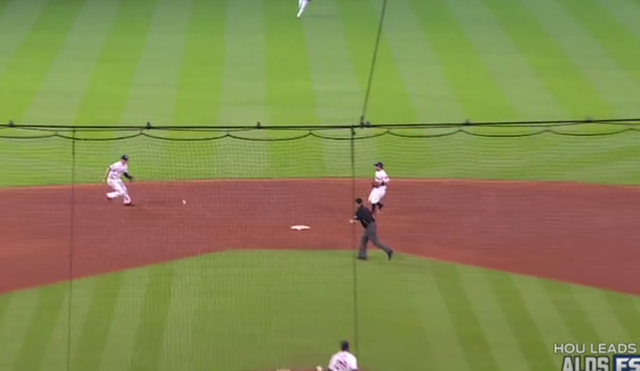 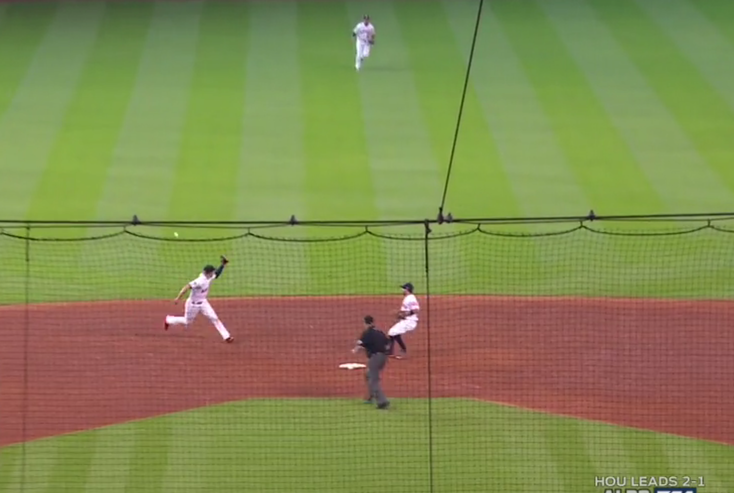 That's the big one, obviously, the biggest play of the game made even bigger by the alternative—not just one out but two, and not just two outs but cutting off the runner at home, too. In the span of about a second and a half, Tony Sipp went from "welp, a ball" to "hey, he's swinging," to "hey, look at that, I get to field a baseball," to "derp," to "phew" to 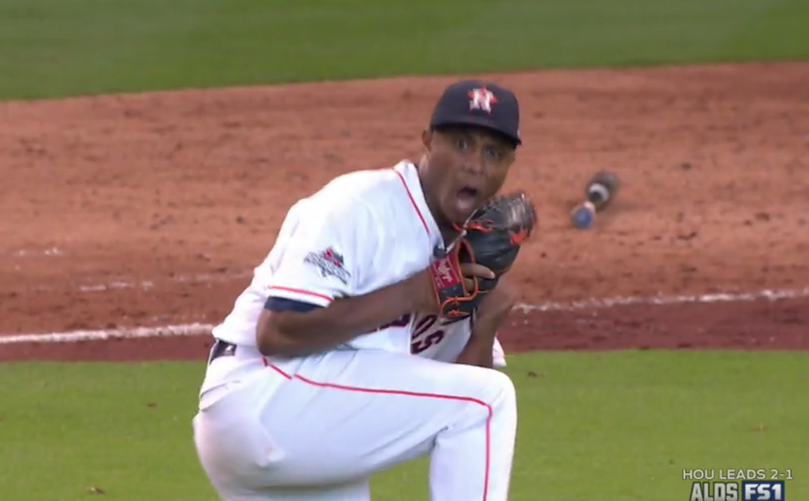 And that right there is literally half of a ballgame. 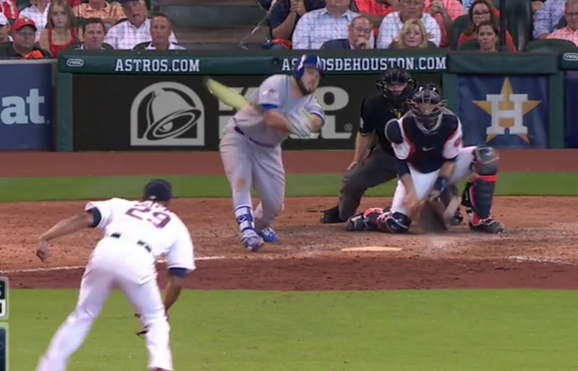 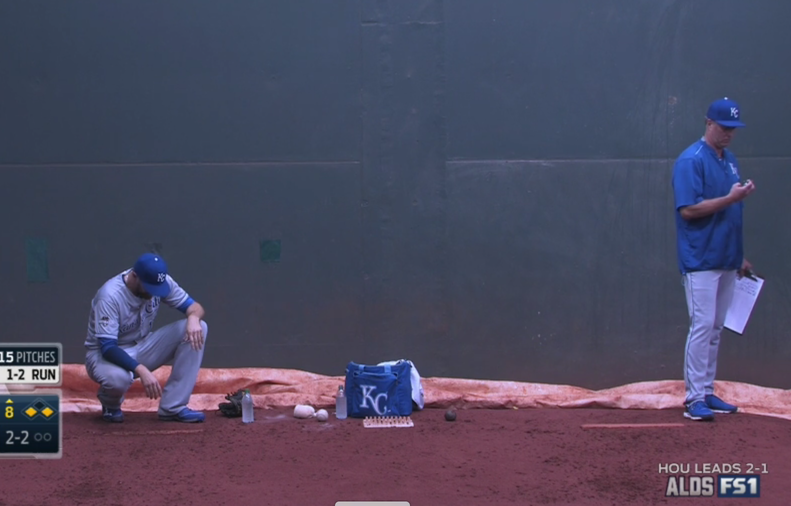 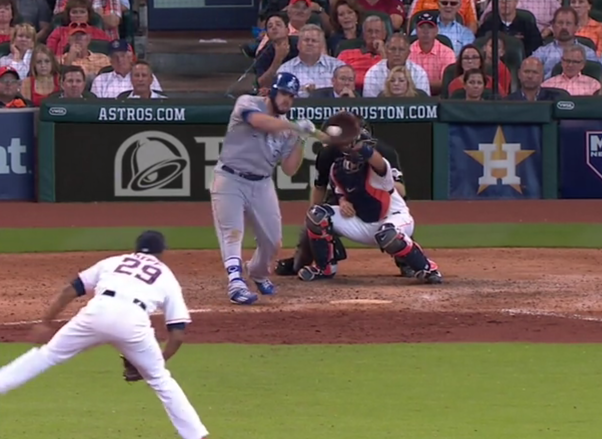 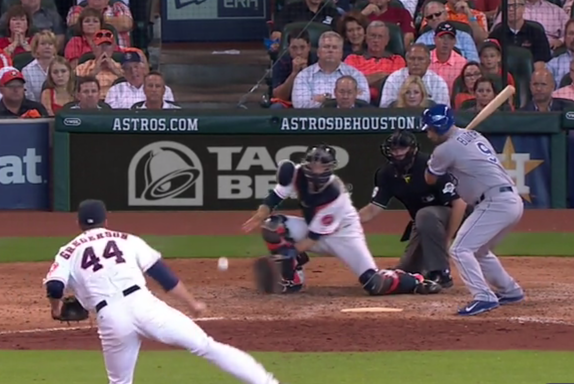 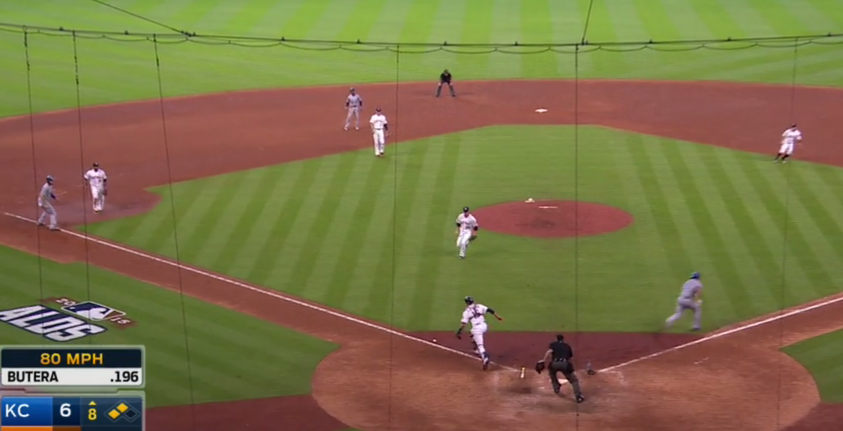 Microevent no. 74: Alex Gordon hits a hard groundball wide of first base: 13.1 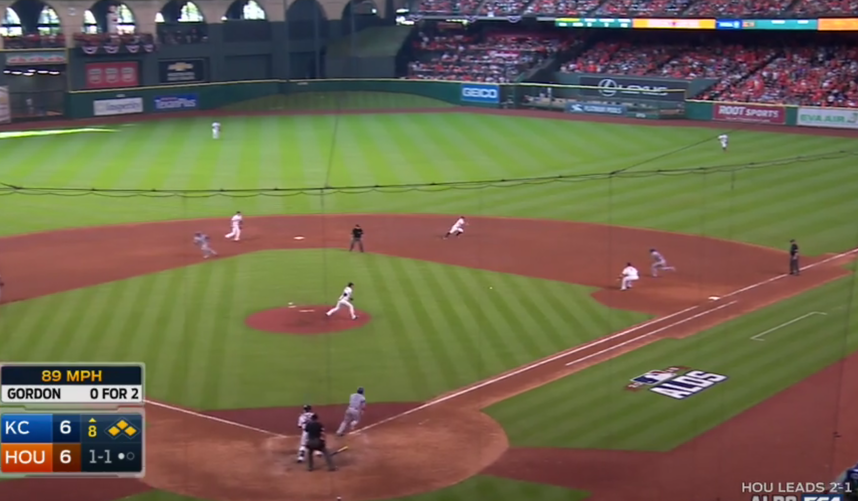 Microevent no. 75: Altuve dives and gets the second out of the inning at first. The Royals take the lead: 21.6 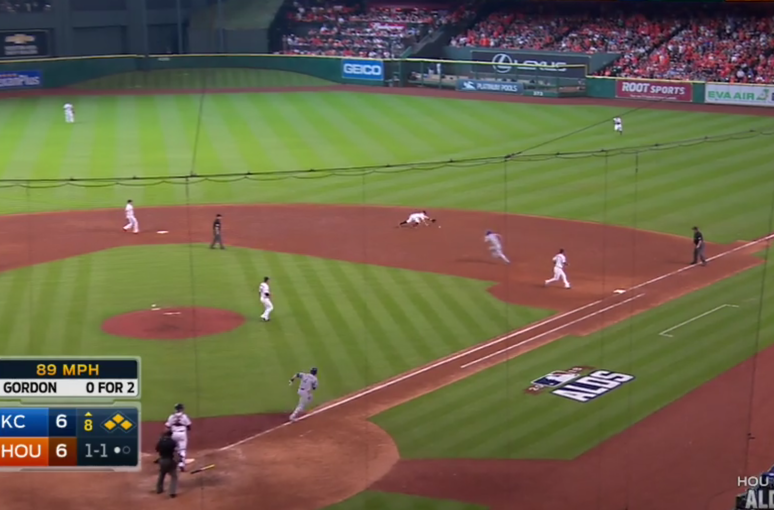 Microevent no. 76: Alcides Escobar takes a borderline pitch with the bases loaded and two strikes: 22.0 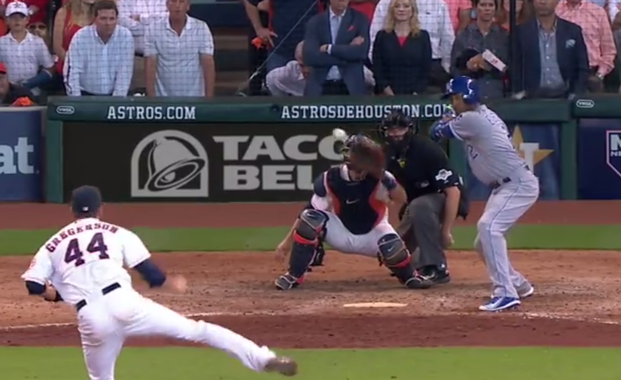 Microevent no. 77: This one is a strike. 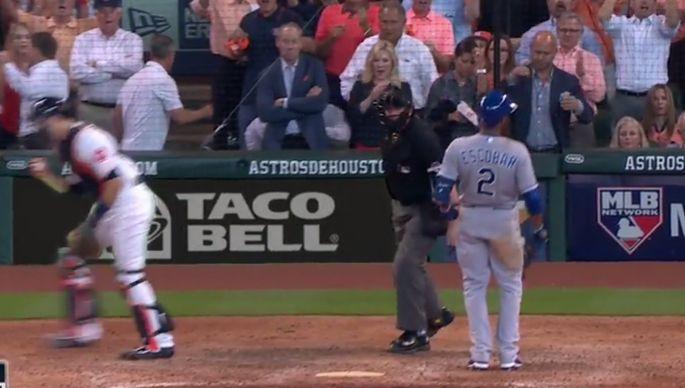 And after 40 minutes, the Royals' half of the eighth inning is over. Think about that: 40 minutes for three outs. The same length as Illmatic, or as an entire episode of Justified sans commercials. Long enough not just for the line on a win expectancy chart to go way down, but for it to go down, and up, and down, and up, and down, and up, countless times. A line drive a few inches out of reach; a grounder a few inches within; a pitch called a ball, and three batters later the same pitch called a strike, and the order of those calls making all the difference in the world. A ball just foul, a swing just tipped, a whole bunch of swings just held up, Drew Butera. A great pitch, and the worst single outcome of the Astros' entire season, maybe of the Astros' entire existence. Four outs somehow blown in a single play. Forty minutes, long enough for the trajectory of the entire postseason to change. At the end of it the Royals had improved their chances of moving on to the ALCS from about 2 percent to 42 percent, and by the time Wade Davis got his six outs the Royals' chances in the series were up to 57.5 percent, because that's what PECOTA figures their odds are in Game Five. PECOTA doesn't believe in momentum, and for the most part neither do I. But I have a hard time not giving the Royals at least an extra point or two on top of that, and I bet the Astros fans who are honest with themselves do, too.

You need to be logged in to comment. Login or Subscribe
fawcettb
Yep. That's just about how I experienced it. Brilliant.
Reply to fawcettb
NYYanks826
Can you just do the writeups for all of the games?

Nice work.
Reply to NYYanks826
jfranco77
This is great, but you missed a key point.

Right before Microevent no. 1, Ned Yost TOOK SAL PEREZ OUT OF A GAME. (That's how Gore got in there, as a pinch runner) This caused a singularity and all subsequent weirdness.

Reply to Plucky
oldbopper
Correa's boot on Morales' automatic DP bouncer instantly brought to mind a quote from a very famous American, "it ain't over till it's over."
Reply to oldbopper
tearecrules
Correa booting that ground ball was easily the worst moment of my baseball-fan life. Luckily I'm a Houstonian and watch football so Oilers-Bills still has a strangle-hold on "Worst Fandom Moment".
Reply to tearecrules