Let’s be clear: I don’t believe in second-guessing managers. I spend a lot of time around clubhouses during the season, and one of the many things I’ve learned with that access is that there are dozens of things we can’t begin to understand that go into the in-game decisions made by managers. However, on Friday evening, for the first time in 164 games, I couldn’t shake the feeling that Joe Maddon had done something wrong in the top of the eighth inning.

After a one-pitch groundout to start the eighth inning by Starlin Castro, Cardinals manager Mike Matheny immediately came out to pull starter John Lackey. The Cardinals righty had just tossed 86 masterful pitches, spanning 7 1/3 innings, allowing just two hits—one a bunt single by Kyle Schwarber—and zero runs as his team clung to the scantest of leads. Matheny went to his bullpen, calling upon lefty Kevin Siegrist to face Chris Coghlan. It was a gutsy call by Matheny to pull his starter who had been so dominant and still hadn’t touched 90 pitches, but it wasn’t as if he was going to a bullpen that he’d struggled to trust in the regular season.

Much to my surprise, Maddon let Coghlan bat against the southpaw. Siegrist has a reverse split for his career; it’s rather pronounced, with a .577 OPS for lefties compared to righties’ .663. Reverse splits are rare, and usually when you see them, the assumption is that it’s a pitcher with an odd arm angle, the right pitch repertoire (neither fits for Siegrist), just a small sample, or a stretch of randomness. If it’s the latter two, the belief is that eventually these things will even out. But with Siegrist, it appears we have an outlier: This has been going on long enough that it’s time to start buying the numbers.

But my concern was less about the numbers with Siegrist or even Coghlan’s, whose OPS drops 155 points when facing lefties in his career. Rather, it gnawed at me that Coghlan has so few opportunities to see lefties, to the point that facing a lefty would feel foreign to him and automatically put him at a disadvantage, regardless of what the numbers say. For his career, Coghlan has 1,978 plate appearances against righties versus 539 against lefties. That number is even more pronounced this season, at 454 to 49.

But as I started writing this, ready to rip a manager who I’ve felt has hit every right note in a 97-win regular season for the Cubs, something hit me. Before the Wild Card game, many were confused as to why Maddon would put out a questionable defensive unit in such a critical game. My response was simple: Maddon’s utilized the defensive versatility of his team all season while trying to maximize his offense (think Coghlan at second), so why would he stop doing what’s worked in the playoffs?

With the fact that I want Maddon to manage no differently than how he had in the regular season (well, outside of the pitching staff, I’d like him to ride starters like Arrieta and Lester and avoid going to his less trusted relievers) in mind, it’s important to consider how he had handled his team when facing Siegrist earlier this season. Siegrist had the opportunity to face Cubs lefties 22 times this regular season, and Maddon chose to pinch hit only five times. The Cubs went 3-for-11 with three walks in those opportunities. With regards to Coghlan specifically, Maddon let him bat three times and pinch hit for him three times, with the lefty going 1-for-2 with a single, a groundout to short, and a sacrifice bunt.

So did I love the move to let Coghlan hit? No, I didn’t. But I also don’t want Maddon to stop doing the things that worked for him for 162 games. And while pulling Lester after he retired Kolten Wong at 105 pitches in the eighth seemed like the right move at the time, I also won’t blame a manager for pushing his ace arms deeper into games than normal in the postseason. That’s the one thing I believe you do change. You shorten up your bullpen, relying only on your best arms, and lean on your best starters.

That said, there’s a school of thought that suggests Maddon should have pinch hit for David Ross and Lester in the sixth after Addison Russell led off the inning with a single. The numbers back this up: According to Mitchel Lichtman, letting those two bat dropped the Cubs win expectancy by six percent, a significant amount—one that, according to Lichtman, easily outweighs the benefit of giving Lester two or three more innings. Essentially, using an arm like Travis Wood or Trevor Cahill to eat the innings that Lester would have pitched wouldn’t have hurt as much as getting real bats into that situation would have helped. And while I may personally struggle with the thought process in pulling Lester so early, I can certainly see the rationale in taking out Ross, who hasn’t posted an OPS above .550 against righties since 2012.

Ultimately, there will be those who blame Maddon for this loss, or a questionable strike zone (and yes, while the TBS zone was certainly off base, it appears that the Cardinals benefited from a few more generous strikes than the Cubs). The fact is this game was lost due to the Cubs big bats failing to deliver, and won by the Cardinals because they managed to come up with a key hit early and continued to execute throughout the evening while the Cubs simply couldn’t. It’d be easy to chalk this Cubs loss to a little bit of bad luck (as explained below, things just didn’t go the Cubs way), but nobody should take anything away from what Lackey, Matheny, and the Cardinals did Friday night. As much as things change, they stay the same.

Kris Bryant hit into seven double plays all season. After two postseason games, he’s hit into two double plays, including one on Friday to end the fourth, one of the Cubs’ few threats of the night. Anthony Rizzo managed just nine double plays on the season, yet he did the deed in a critical seventh inning on a pitch that Lackey missed his spot badly on: 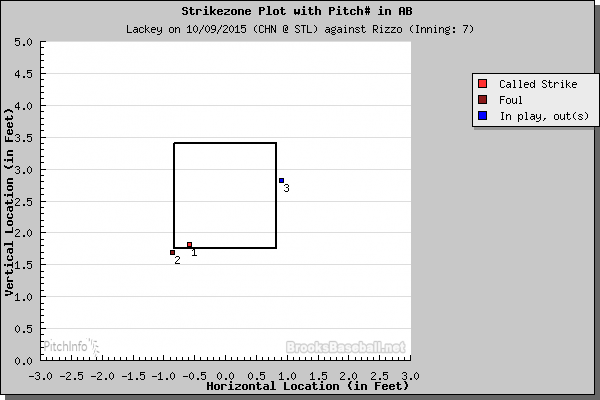 And while Lackey missed his spot, it does appear at first glance to be in an area—inside, off the plate—that would be harmless. But that’s been a zone where, when Rizzo has swung, he’s done major damage: 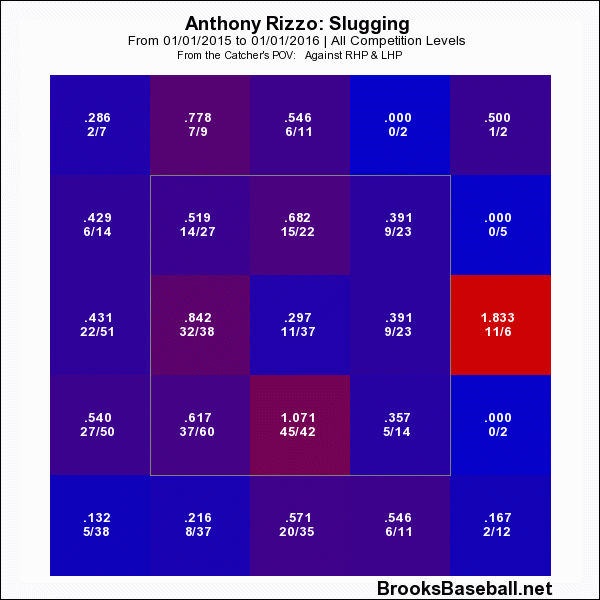 But not tonight, as yet another inning would end meekly for the Cubs. However, it isn’t Rizzo’s inning-ending at-bat that stuck out to me. The previous inning ended with what looked like a sure home run from Dexter Fowler, but a slight wind blowing in likely kept the Cubs from heading into the latter innings with a one-run lead. The key was that Lackey finally looked vulnerable; the Cubs had just started their third time through the order and appeared to be honing in on Lackey’s offerings.

Kyle Schwarber began the seventh with a bunt single, bringing Bryant to the plate with a chance to put his team ahead.

Bryant ended up whiffing on a pitch on the outside corner to end the at-bat, but it’s that second pitch that changed the complexion of the at-bat. Yet again, Lackey had badly missed his spot, and now he’d done so to a very dangerous batter. 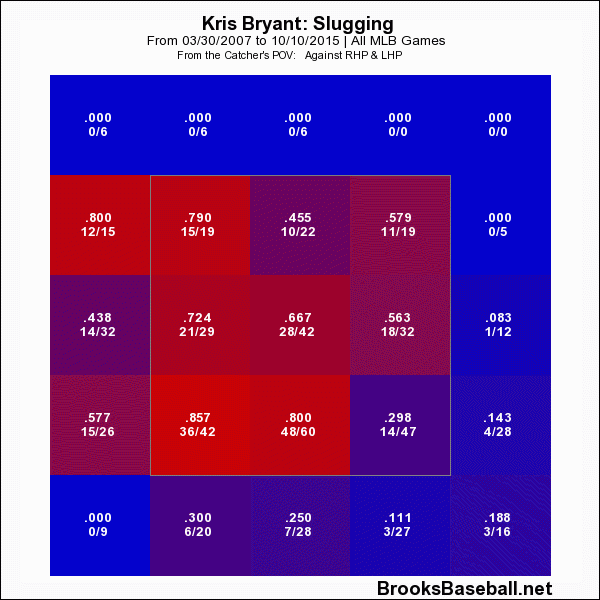 That’s a significant amount of red right over the plate. Bryant had his pitch, a pitch he normally pounces on, but on Friday he missed it, harmlessly fouling it off.

It was a missed opportunity, and it really tells the story of the night for the Cubs. Through two games in the playoffs, Rizzo and Bryant are 0-for-14 with six strikeouts and nine men left on base. Of course, they won one of those games allowing them to get to this point, but if the team expects to advance further into October, they’ll need their two big bats, the ones who compose the heart of their order, to get going.

Much of the talk that was given to the Cubs rookie trio of Bryant, Schwarber, and Addison Russell, but it was the Cardinals unheralded kids who delivered. Stephen Piscotty scored the first run of the game, then launched a mammoth two-run homer to put the game out of reach in the eighth. This came after Tommy Pham had slugged a deep blast of his own just two batters earlier. After all the heat he’s taken, it was their manager who seemed to push all the right buttons in Game One. The Cards kids and the man to make the decisions upstaged Maddon and the young Cubs. It wasn’t their experience that they drew upon to take the matchup; no, the Cardinals turned the tables on the Cubs by getting a dominant performance from their best starter, big hits by their rookies, and smart moves by the skipper. I’d say it doesn’t make sense, but then again, it’s the Cardinals, so perhaps it’s exactly what we should have expected.