We’re all familiar with the idea that pitching prospects aren’t exactly a sure thing. Given the choice, most any evaluator will take a position player over a pitcher if talent (current and future) is equal. This simple concept has long been summarized by the acronym: TINSTAAPP. You may notice the blue text back there. That’s because TINSTAAPP is such a constant in baseball analysis that it was once the name of a pitching-centric podcast here at Baseball Prospectus.

BP’s role in proselytizing baseball fans into the cult of TINSTAAPP has been significant, starting with no less than the introduction of the concept itself more than a decade ago. Indeed, BP’s founder Gary Huckabay is often credited with being the first to coin the term on the rec.sports.baseball forum, and it’s been a mainstay of BP’s analysis ever since. The unofficial description of TINSTAAPP can be found in the glossary of Baseball Between the Numbers, a Baseball Prospectus book published in 2007:

TINSTAAPP: A term coined by Baseball Prospectus founder Gary Huckabay that stands for “There Is No Such Thing As A Pitching Prospect.” TINSTAAPP is meant to be a warning to teams not to overinvest in young pitchers—especially high school pitchers—due to their attrition rates. The term shouldn’t be taken absolutely literally, as some pitching prospects do beat the odds and become successful major leaguers. Inspired by TANSTAAFL, an acronym for “There Ain’t No Such Thing As A Free Lunch” from Robert Heinlein’s classic book The Moon Is a Harsh Mistress.

Unfortunately, TINSTAAPP has become a problem. The problem isn’t the textbook definition of the term, but rather the implementation of it across baseball. This is an inherent problem with popularizing a phrase that isn’t meant to be understood literally, with each new adoptee leveraging the term in a way that matches their worldview. One might argue that this problem started from the very beginning, with incredibly smart and talented writers like Joe Sheehan taking TINSTAAPP in a more authoritative direction than was perhaps intended.

TINSTAAPP has become exactly what Jonah Keri notes it should not be, saying that it is a term that “shouldn’t be taken absolutely literally.” However, a search on Twitter results in a myriad of concerns about even healthy pitching prospects with phrases like “but TINSTAAPP” or “TINSTAAPP and all that” or my personal favorite “going full TINSTAAPP.” TINSTAAPP has become a blanket statement, but rarely (if ever) is the actual data behind the phrase considered. It’s important to consider this because blanket statements rarely capture the very thing they are meant to describe accurately.

“I really hate TINSTAAPP,” a friend told me Thursday. “It’s just lazy analysis.” I loved TINSTAAPP, and I’m not sure I don’t still love it, because sometimes it’s harder to be pithy than it is to be literally correct. But I also never knew what to do with it, and I don’t know now what to do with it. Does it mean that every pitching prospect should be traded just as quickly as a pitching-prospect sucker can be found? Does it mean that the 20th-best prospect on Baseball America’s prospect list (or our’s) is always better than the 19th-best, if the 19th-best is a pitcher? Is it, as in the dogmatic suggestion offered by Sheehan, that nearly all pitchers are equal until they’re old enough to play poker at the Bellagio? Or is it just a clever way of describing the world around us?

Probably mostly the last one. And, promisingly, the world around us seems like it might be changing.

I think Sam’s confusion is underlined by the fact that we don’t have a firm grasp on prospect success rates, or even what makes a prospect successful, for that matter. In looking at our current interpretation of the concept of TINSTAAPP, some context is important to further our understanding. To that end, we pulled some “success” metrics from past BP Top 101s to assess how much less of a prospect a pitcher is.

For the purposes of this analysis we’re going to ignore draft status—you’ll recall that the original definition of TINSTAAPP specifically calls out high school pitchers—and prospect ranking: If you make a BP Top 101 Prospects list, then you’re considered a top pitching prospect and are included in the analysis.

From 2007 through 2013 BP ranked 704 prospects (not subtracting repeats), 82 percent of whom went on to make the major leagues. That’s a pretty good success rate for MLB appearances, but many top prospects get the call even if they stumble simply because of their former promise. This is a decent enough baseline, but a better question is how many of those top prospects played above replacement level. Specifically, we’re looking at players who produced more than six WARP over their first six team-controlled seasons, as these guys provided real value. It’s not a high bar, but definitely higher than simply making the majors.

By that standard, roughly 27 percent of the players on BP’s Top 101 are able to pass the bar. How do pitchers and hitters compare? From 2007 through 2013, about 87 percent of hitters made an MLB debut after being named on a BP Top 101, while 74 percent of pitchers were able to crack the majors. When looking at actually producing value at the MLB level, things get a little tighter. In this case we’ll only look at 2007 through 2009 because after that the players listed haven’t had a full six years to accrue value. From 2007 through 2009 the hitters named on BP’s Top 101 produced more than six WARP over their first six seasons 40 percent of the time. Pitchers, on the other hand, were able to produce the same value over their first six seasons roughly 27 percent of the time. 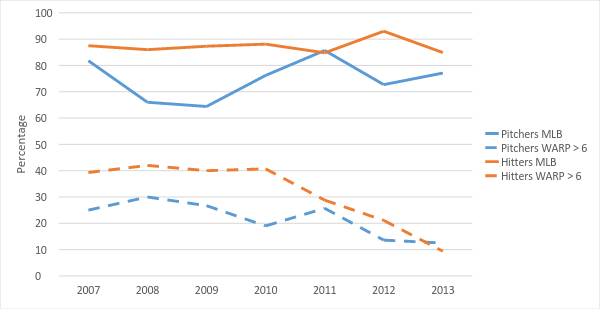 The obvious drop-offs from 2010 through 2013 in the WARP > 6 is because those players haven’t had as long to accumulate value, meaning fewer of them have crossed the six-WARP benchmark we’re using here.

There is also of course the caveat around preferences in prospect evaluation. If BP’s prospect team prefers to dream on pitchers with big stuff but uncertain futures, their attrition rates will be higher. This is especially true if, compared to hitters, the prospect team prefers polished hitters to raw ones. That’s not to say that this is the case; it’s to simply highlight that preferences in prospect evaluation no doubt impact this data.

Perhaps the answer is that we simply aren’t as good at evaluating pitching prospects. This is possible, and perhaps corroborated by the data, depending on how you interpret it. Below is a chart showing the percentage of top-quartile players who appeared on a BP Top 101 list at some point: 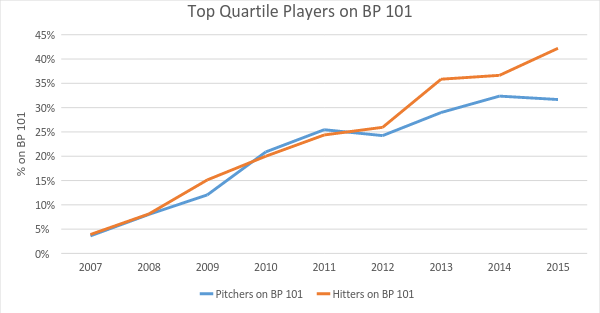 The goal here is to assess the argument that pitchers tend to “pop up” out of nowhere (á la Jacob DeGrom) at a higher rate than hitters. The chart above shows that it is true that more hitters have been named on prospect lists than pitchers, though the difference in any one year is less than 10 percentage points. It would seem that identifying top performers among hitters and pitchers appears to be an equally challenging task.

All that said, TINSTAAPP lives on. We hypothesize that it lives on because it provides a simple, elegant view of a complex and unclear phenomenon. The unpredictability of the pitcher and the pitcher injury makes a concept like TINSTAAPP an enticing solution. Pitchers often seem to break for no apparent reason. We have theories about usage, mechanics, pitch types, and body types, but we do not have any truths. When we don’t have truths, we are left to face uncertainty. The human brain doesn’t play so nice with uncertainty, so we use shortcuts to find patterns and eliminate that uncertainty wherever we can. TINSTAAPP is simply one of those shortcuts. In many ways TINSTAAPP makes us overconfident in our analyses. It’s a simple rule that we can apply with disregard for outcomes because we will often be proved right in taking a skeptical approach. The reality is that this overconfidence can cloud our judgment, and influence our decisions or analysis for the negative. Uncertainty may be uncomfortable, but dealing with that discomfort is better than ignoring the reality behind it.

Back in 2007 Gary Huckabay provided some thought on what had become of TINSTAAPP in the four years since its introduction:

When I first wrote that “There’s No Such Thing as a Pitching Prospect,” it meant two things, one of which has kind of become lost over time. Yes, it means that pitchers get hurt at approximately the same rate that methheads swipe identities and lose teeth. That’s what all pitchers do, not just prospects. But it also had another meaning-that guys who are totally blowing people away in the minors like they’re so many hot dog pretenders before Kobayashi are absolutely not pitching prospects-they’re already pitchers, and more time in the minors only means time off the living, pulsating clocks that are their labrums, rotator cuffs, and elbows.

Huckabay notes one of those universal truths, that pitchers get hurt all the times. The second component of TINSTAAPP that he refers to is that pitchers who have MLB-ready stuff sometimes spend their time “wasting bullets” in the minors, a concept that we’ve tackled before. TINSTAAPP does not literally mean that there are no pitching prospects to be found. The Dodgers probably aren’t looking to ship off Julio Urias, even if the early returns in Triple-A are less than stellar.

At the end of the day, our feelings on TINSTAAPP are mixed. The baseball-analysis community (or some better combination of words) will forever be indebted to TINSTAAPP, an ingenious and unconventional line of thinking that challenged and ultimately improved the way we understand and analyze pitching prospects and prospects in general. That said, the use of TINSTAAPP in today’s world has become the very opposite of its initial spirit; it has become an easy answer, a debate stopper, something that keeps us from asking better questions and searching deeper.

Perhaps what we should do with TINSTAAPP is what TINSTAAPP did best: challenge and improve our understanding of baseball, rather than rest on what we thought we knew to be true. As TINSTAAPP showed us many years ago, if there is any guarantee worth betting on, it is that what we believe to be true today will certainly be proved incomplete tomorrow.

You need to be logged in to comment. Login or Subscribe
bubba3m
I think your BP team has been very good balancing pitchers with hitters in your top prospect lists in a way that keeps in mind these concepts. In our fantasy league's minor league draft, pitchers are rarely drafted by my league-mates, and, because of your balance, I have been fortunate to draft the likes of Syndergaard and Salazar well below their true (and, in 2015, way WAY below their eventual) value.
Reply to bubba3m
newsense
One thing that isn't considered here is that TINSTAAPP has impacted the Top 101, that a pitcher has to be more special than a position player to be considered a top prospect. Pitchers make up nearly 50% of the roster but what % of the top 101 are pitchers?
Reply to newsense
BSLJeffLong
It was about a 45:55 split from 2007 through 2013 in favor of hitters. So not far off from what roster construction would need to be.
Reply to BSLJeffLong