Much of the current managerial talk may linger around Matt Williams today and his interesting performance last night against the Mets, but has the managerial youth movement (along with requisite inexperience) gone well thus far? This article discusses the changing of the landscape just two years ago, and originally ran on November 5, 2013.

Early in the World Series, my girlfriend wondered aloud why FOX was showing so many reaction shots of the same St. Louis player. “Which player?”, I asked. “That one,” she answered, the next time the broadcast cut to the dugout camera. She meant Mike Matheny.

It was an understandable mistake. Matheny can pass for a player because he’s not that far removed from being one. His playing days were done after 2006, his age-35 season, and he’d been retired officially for only five seasons when he was hired to take over for Tony La Russa. Given 25 years and approximately 20,000 packs of cigarettes, a fresh-faced manager like Matheny could come to look like Jim Leyland. (Okay, maybe not Leyland, who looked like this at Matheny’s age.) But that’s a long way away, and Matheny doesn’t smoke.

We’ve seen a lot of Matheny-like managers lately. Of the 12 managers hired since the end of the 2011 season, nine have still had that new-skipper smell. And there might be more first-timers on the way: three of the four candidates interviewed by the Mariners would be filling out their first lineup cards in Seattle. (The Cubs have been connected to a more even mix.)

“We’re seeing a changing of the guard,” says Chris Jaffe, author of Evaluating Baseball’s Managers. “A TON of older managers have left the ranks in the last 2-3 years. Gotta find some new managers somewhere, so [teams are] going to new guys.”

With Leyland and Davey Johnson calling it quits this year, and other old-timers like Bobby Cox, Tony La Russa, and Jack McKeon walking away over the past few seasons, the sudden lack of long-tenured skippers is almost startling. “There are only two managers left that there were in the 1994 strike,” Jaffe says, referring to Buck Showalter and Terry Collins. “A few years ago, we had four guys left from the 1970s.”

To some extent, this is just cyclical. Every so often, a group of long-tenured managers reaches retirement age around the same time, and teams are forced to bring in new blood instead of recycling experienced candidates. “There are other big managerial departures in history,” Jaffe says. “1920, 1950-51, and 1976. But nothing like this.”

So we’re seeing a historic amount of turnover. Are we seeing a historic type of turnover? Sort of. Some things haven’t changed: even today, to get a gig as a major-league manager you have to have been a big leaguer yourself, or at least (like Bryan Price) have spent some time in the minors. And recently retired players have always been a source of fresh managerial talent. Obviously, no one is born a big-league manager, so it’s not as if successful managerial candidates have always had to have a previous major-league managerial job on their resumes.

The average age of major-league managers has yet to reflect any youth movement: in fact, last year's average of 53.9 (as of April 1) was among the highest ever. (The graph goes back to 1889 because that's the first season for which we're not missing birthdates.) 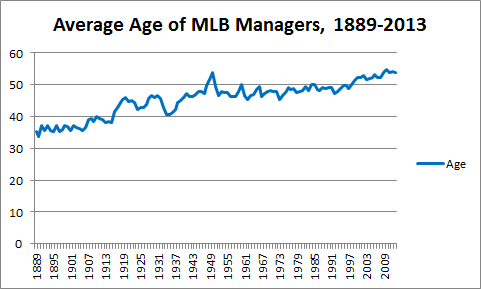 This is likely to fall significantly next season, with Leyland, Johnson, and Charlie Manuel replaced by much younger managers. Still, it won't hit a historic low.

But one thing does seem to be different. Of those nine rookie managers minted in the last two years, five—Robin Ventura, Matheny, Mike Redmond, Walt Weiss, and now new Tigers skipper Brad Ausmus—had no previous coaching experience (save for Ausmus’ few months managing Team Israel, which failed to qualify for the WBC).There’s plenty of precedent for managers to be hired at their age, and even earlier; Showalter was 36 in his rookie managerial season, which made him the youngest manager in the majors in each of his four years in New York. But by the time the Yankees installed him as manager, Showalter had already managed in the minors for five years, been named Minor League Manager of the Year, and spent two seasons as a Yankees coach in the big leagues. Not so for Ausmus and the others. “This part is new,” Jaffe says.

Baseball is a bigger business than ever. So why are owners and general managers becoming increasingly willing to entrust their teams to managers who haven’t served some sort of apprenticeship first?

It doesn’t hurt that they don’t cost as much, and that they simply have more energy to devote to the job than an older alternative. But the answer, at least in part, lies in the ever-increasing sophistication of front offices. As I’ve written before, the tactical information gap between front office and field staff has grown. It used to be that the two were equally ignorant of run expectancy tables, “times through the order” penalties, and the benefits of using spray charts to inform defensive positioning. That’s no longer the case. Most front offices are far more familiar with the latest research. Meanwhile, managers have to accommodate more demands from the media, all while monitoring and motivating players who make much more than they do. If managers are expected to don headsets during games to talk to Joe Buck between innings, they can’t also be expected to be on top of every tactical situation.

The solution is for the skipper to specialize by delegating responsibilities that once fell within the manager’s domain to the front office or an expanded coaching staff. Since so many widespread beliefs about the game have been upended over the past decade, a GM wouldn’t necessarily want a manager who dates back to the 1980s (or even the early 1990s, when Dusty Baker got his first managerial job), before many important discoveries had been made or popularized. He’d rather have an open-minded manager who’s a blank slate, or at minimum, whose beliefs about tactics aren’t fully formed. That sort of skipper isn’t so set in his ways that he’d regard (and reject) assistance from the front office as an unwanted intrusion. As Colin Wyers put it after Walt Weiss was hired,

If your vision is that as a GM you have substantial input into roster construction and usage, you’re not really all that worried about your new manager being inexperienced there. (In fact, you may well prefer it over a manager who wants a larger amount of input than you really want to give him.) In terms of tactics, all of these men have played in the majors and so have seen everything before. And if you have strong opinions on tactics, again, it may be easier to find a manager who doesn’t and provide him with guidance. Or you can find coaches that help supplement a manager’s abilities there.

“You can’t settle into, in today’s world, what you’ve been doing year in and year out,” said Tigers GM Dave Dombrowski, who initially expressed a preference for an experienced manager at Leyland’s retirement press conference, but ultimately went with Ausmus. “You have to at least keep an open mind to different types of situations. That’s where it led us.”

It’s been suggested that a stat-savvy bench coach would be the best conduit through which to funnel sabermetric strategies to the field, though in that case, a manager would have to dispel any clubhouse suspicion that the coach could compromise his authority. The Nationals may have hit on a superior solution: create a new coaching position. After his hiring by the Nationals, first-time manager Matt Williams added Mark Weidemaier from Arizona’s front office as a seventh uniformed coach whose responsibilities include defensive positioning and advance scouting. “That’s one of the things he feels is very important: defensive alignments and advanced sabermetrics,” GM Mike Rizzo said about Williams. And attitude is all that matters. Williams doesn’t have to be an expert on sabermetrics himself (and he isn't, if his choice of favorite stat is any indication); he just has to be willing to listen to one, freeing him to focus on softer factors.

Ausmus might be one of baseball’s smartest managers, an Ivy League grad and a former elite defensive catcher whose awareness of the game always drew praise. But Dombrowski specifically cited Ausmus’ “leadership capabilities” and “ability to communicate and build a good staff around him” as points in his favor. The implication is that tactical acumen is secondary—not because it isn’t important, but because it can be outsourced. So is a young, inexperienced manager like Ausmus better suited for clubhouse relations than an old hand like Leyland?

It’s as difficult to answer that question as it is any question about the things managers do behind closed clubhouse doors. Leyland’s authority flowed from his experience, from a World Series win and multiple pennants. Ausmus’ is derived from the respect his peers had for the way he conducted himself during his career, and from how closely he can identify with current players. “I’m not that far removed from the players,” he said. “I have a pretty good understanding of how the locker-room dynamic is…So I have a pretty good feel, I think, of what the modern-day player, what the makeup is, what the mindset is.”

We’ve seen older managers lose their ability to communicate with a younger generation of players. In a similar vein, it’s possible to imagine a younger manager being too player friendly and failing to command the respect necessary to maintain discipline. We just haven’t seen it happen yet. Committing to a first-time manager means more uncertainty; while some of the recent hires had lasting associations with the club that hired them, which reduced the uncertainty, Ausmus and Williams weren’t as well-known commodities (as Ken Rosenthal points out). And that uncertainty is especially scary for teams like the Cardinals, Nationals, and Tigers, who are expected to contend now. It’s not a big deal if Bo Porter costs the Astros their 52nd win; it’s a very big deal if Matheny screws up in the World Series. Of course, new managers don’t have a monopoly on mistakes, and having an experienced supporting staff (as both Washington and Detroit do) should help the new managers avoid inexperience-based errors.

The first of the neophyte managers have acquitted themselves well—or at least avoided high-profile failure. And that means the way is clear for the hiring of still more managers in this mold.