Casey Fien is the quintessential Twins pitcher. To quote the 2015 BP Annual, Fien would “rather swallow glass than issue a walk,” a hallmark of the Twins’ oft-cited strike-throwing mentality. This year Fien has become an even greater caricature of himself by slicing his walk rate in half, and dropping his already low strikeout rate even further. Fien strikes out just 14 percent of opposing hitters, the sixth-lowest rate among qualifying relievers, and walks a paltry 2 percent of opposing hitters, the second-lowest rate in baseball.

Fien walks nobody, strikes almost nobody out, and yet somehow doesn’t give up loud contact all that often. Fien is everything that a stereotypical Twins pitcher should be, and nothing like a stereotypical reliever. Despite all of this he has been effective, posting an ERA+ of 117, and a FIP+ of 109. Over 48 2/3 innings this season, Fien has posted a very strong 2.36 DRA, nearly a full run better than his ERA.

Fien’s arsenal essentially consists of just two pitches. His four-seam fastball and cutter make up over 90 percent of his offerings, with a curveball accounting for another 7 percent of Fien’s pitches. A sinker and change make up the balance, but Fien has only thrown 12 of those two pitches combined this season, so we’ll largely ignore them for the sake of understanding his approach. 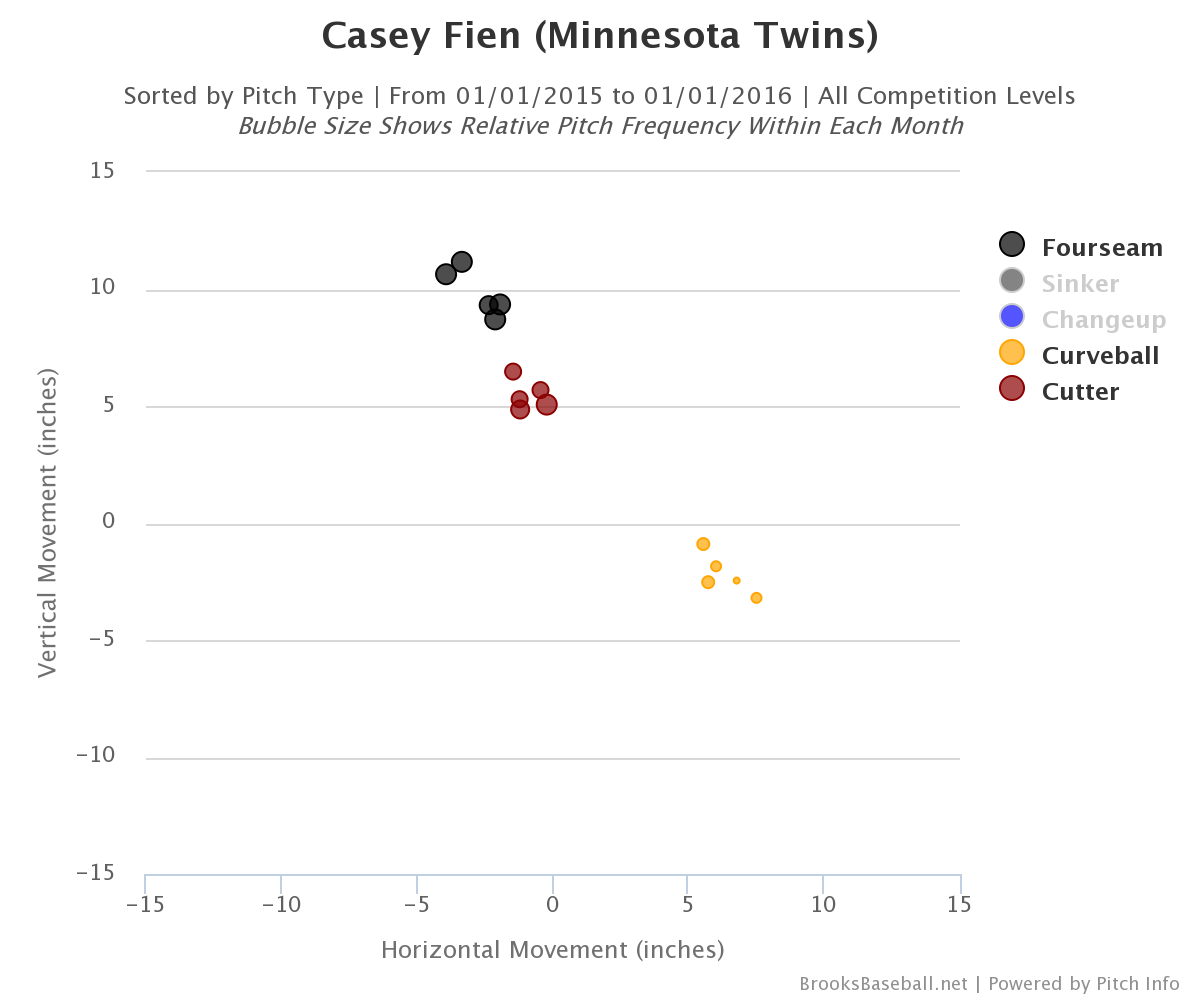 Over 90 percent of Fien’s offerings fall within a fairly predictable range upon reaching the plate. In fact, the 23.4 square inches that Fien’s average four-seamers and cutters have fallen into this season is only slightly smaller than an iPad Mini screen. There is something of a velocity differential between the two pitches—the four-seam fastball averages 93 mph while his cutter sits 88-89 on average—but we’re not talking about a huge difference. Opposing hitters can pretty much sit fastball, knowing that the pitch they see is likely to be in a 5 mph band, with fairly predictable movement. The curveball gives him a little bit of a different look, but with only 7 percent of his pitches being breaking balls, it’s more of a show-me pitch than anything else.

Even though opposing hitters know what’s coming, Fien isn’t afraid to pound the zone to avoid costly walks. More than half of his pitchers (53.6 percent, to be exact) are in the strike zone, well above the MLB average of just under 48 percent. Fien also likes to get ahead, as one might expect, with nearly two-thirds of his first pitches going for strikes, again a well-above-average figure. He may attack the zone, but that doesn’t mean that Fien is striking guys out. His sub-five-per-nine strikeout rate falls in line with his below-league-average swinging strike rate of 8.4 percent.

The results are somewhat predictable. Opposing hitters swing at Fien’s offerings early and often. Those swings turn into contact, of one form or another, with his contact rate sitting four percentage points above the league average of 79 percent.

If I told you that Fien gives up a lot of contact, but is a successful reliever despite this, you might assume that he’s a ground-ball artist in the Zach Britton or Brad Ziegler mold. You would be wrong, but it’s a rational thought. In fact, Fien is a fly-ball pitcher with roughly 1.3 fly balls for every ground ball given up. Despite his fly-ball propensities, Fien’s 6.8 percent HR/FB ratio (9.1 percent career) means that he’s not constantly watching balls fly out of the stadium every time he pitches.

Once again, nothing about Casey Fien makes any sense.

As a lefty, you walk up to the plate while Fien readies himself on the mound. You know that 90 percent of the pitches he throws are either four-seam fastballs or cutters, so you prepare yourself for a heater. Fien rears back and delivers, his right arm lurching toward home plate. The pitch is on its way toward the catcher’s mitt. You swing at the fastball as it hurtles towards the outside corner of the plate, hoping to lace the ball into left field. As you swing though, Fien’s 79 mph curveball darts under your barrel, catching the outside corner in the process.

Fien loves to throw first-pitch, backdoor curveballs to left-handed hitters. In fact, he does this 35 percent of the time, far more often than he throws his cutter. Very few relievers have the need or requisite skill to pitch backwards, and yet here is Fien, throwing breaking balls to opposite-hand hitters on the first pitch of an at-bat.

Somewhat more predictably, Fien likes to go to his four-seamer when behind against lefties, though he transitions to his cutter when ahead in the count or with two strikes.

Right-handed hitters have it a bit easier, but that’s simply because Fien is more of a two-pitch guy against same handed hitters. This is interesting and odd because typically breaking balls are used against same-side hitters first and foremost, but Fien abandons his against righties. 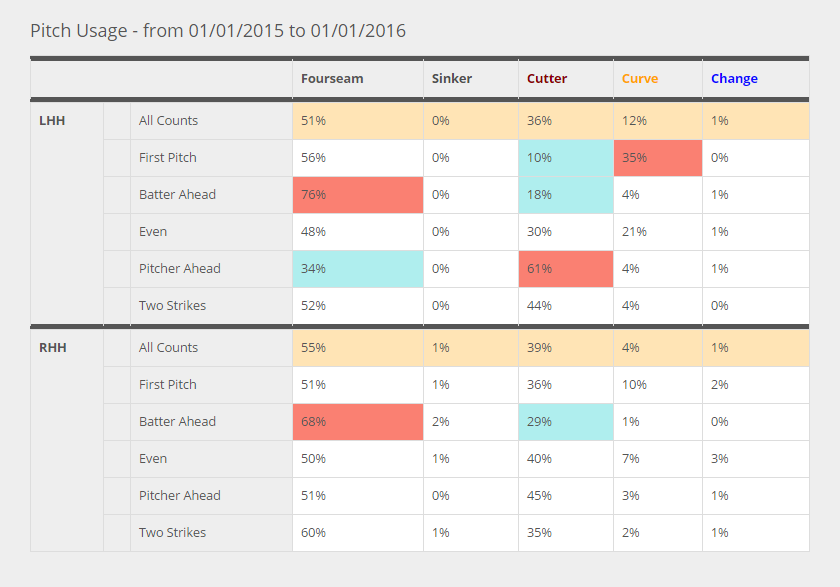 There’s common wisdom around baseball that if a pitcher wants to avoid giving up the long ball, he should avoid working up in the zone. While this truth has been held in less and less esteem over recent years, it’s still somewhat surprising to find pitchers without dominant stuff who prefer to work up in the zone. If you’ve noticed a pattern here, and hopefully you have, that’s all the reason in the world to think that Fien does in fact like to work up in the zone.

Specifically, Fien works up in the zone with his four-seamer, while working more down with the cut fastball. Below is each of Fien’s three most-used pitches in terms of where he locates them in the zone:

Two things jump off the screen immediately. The first is that Fien has pretty consistent usage patterns. By that I mean that each pitch has some very hot areas, and some very cold areas, with fairly clear distinctions between each. The second thing that jumps out at you is the discrepancy between pitches. The cutter is almost exclusively down in the zone. The curveball is nearly always on the arm side for Fien, and typically down in the zone. The fastball is often up, and also often more on Fien’s glove-side portion of the zone.

If you look at the data, it’s not really clear why Fien doesn’t have an ERA over seven. He has some pretty extreme, yet consistent, tendencies that opposing hitters should be able to study and attack. He doesn’t have a ton of pitches to go to, and more often than not you can narrow it down to one of two pitches with near impunity. From a statistical standpoint, Fien is incredibly predictable.

The problem of course, is the refrain from above. The problem is that Casey Fien makes no sense. He pitches backward, goes against conventional wisdom, and throws strange pitches at strange times. While Fien may be statistically predictable, attacking him in that way will make you go against everything your guy has ever told you as a hitter.

Fien plods along, confusingly successful. He does so not so much because his pitches are overpowering or because opposing hitters don’t know what’s coming. Fien is successful because he pits hitters’ heads against their gut feelings, and while they’re having an internal argument over what’s coming next, Fien pounds the zone, gets ahead, and generates defensive swings.

You need to be logged in to comment. Login or Subscribe
backwardgalaxy
If Chewbacca lives on Endor you must acquit!
Reply to backwardgalaxy
jwbbslo
I know this wasn't the point of the article,but the one thing that does not show up in his numbers is his make up. I had the privilege to recruit & coach Casey at Cal Poly SLO,& he is one of the most physically & mentally tough guys that you'll ever meet. He competes with a chip on his shoulder. Never gives in. He was always having to prove the naysayers wrong. This trait can't be over valued.
JW
Reply to jwbbslo