keyboard_arrow_uptop
Subscribe to Baseball Prospectus
On Friday, at 4 p.m. eastern time, the trade deadline came and passed. I've always wondered how GMs communicate during the hectic time. I imagine email and text message are the most common, but could there be other mediums that have an oddly devoted user base in MLB front offices? I've found Facebook's chat feature to be a slick, easy to use interface, and guys are probably out of the reach of the media when on that. Maybe the GMs have their own private subreddit, where they make self posts and negotiate in the comments. I like to think they use Snapchat, communicating via posts like this: 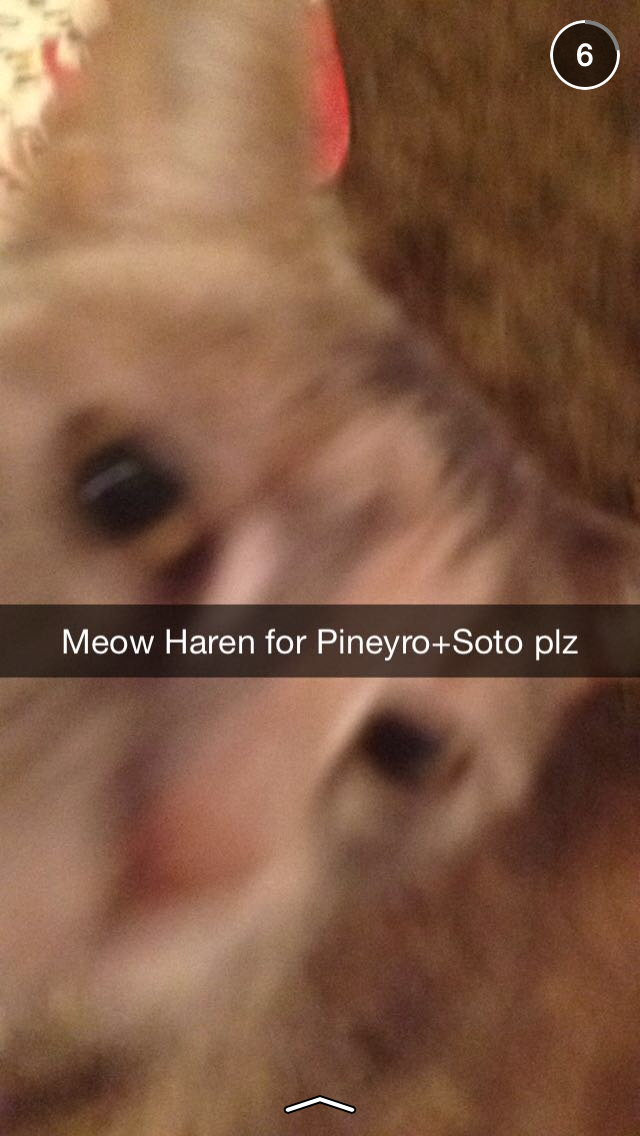 Monday
In making adjustments, communication with players is often just as important — or more so — as the actual mechanical changes discussed: The Gentle Art of Making Adjustments, by Brendan Gawlowski, Baseball Prospectus

At bottom, coaches face many of the same issues whether they're instructing players in pitching, hitting, catching, or fielding: Communication and tailoring the message to the individual are key. Coaches like Callaway, who make the extra effort to relate with the specific needs and vernaculars of their players, benefit not only from enhancing their ability to communicate but also by building trust and fostering a beneficial player-mentor relationship.

Communication is important in every situation and some players, particularly those who don’t speak much English, come with additional challenges. Most organizations employ at least one bilingual coach at each of their minor league affiliates, and rely on them to translate information into Spanish. Like Hawkins, Manto trusts his coaching staffs: “we think they can get the point across,” he says, although he admits that a language barrier can obstruct some of the intricacies of instruction. “Sometimes it just comes down to playing baseball charades in the clubhouse a little bit.”

The atmosphere (both literally and figuratively) in the Florida State League is…weird: Blame It On the Rain, by Chris Gigley, The Hardball Times

More than 25 years later, it’s one of the truly unique minor leagues in baseball, home to lonely outposts such as Roger Dean Stadium that offer the most relaxed, laid-back fan experiences you can find in baseball. Parking is free or cheap. No crowds clog aisles and concourses. No long lines snake from concession and souvenir stands. Seat assignments are optional. Sit wherever you want. There’s always plenty of room.

Steve Gliner, chief operating officer of the Fort Myers Miracle, said he needed a few years to get used to the whole scene after he moved from short-season Hudson Valley in 2003. The Brooklyn native had helped build that New York-Penn League franchise from scratch. For the better part of a decade, it sold out nearly every one of its home games in 4,494-seat Dutchess Stadium. Gliner said he’d heard about the challenges in Florida, but he said he had to live it to really get it.

The grind hits everybody, even you! (Yes, you!): Bumping the Grind, by Russell Carleton, Baseball Prospectus

There are a lot of statements in baseball that start with "He's the kind of guy who …" We are quick to ascribe performance to a personality trait rather than … a performance. Sabermetrics has debunked a few of them (clutch hitters being the most famous). I think baseball has a problem understanding that people and situations change much quicker than we realize. Maybe there is some set of circumstances that can lead to a player not drifting off as the season goes along. (My research suggests it's the manager's doing, or perhaps that's just a proxy for the general atmosphere around a clubhouse. Hard to tell.) This is another one of those cases. There's not really such a thing as a guy who is immune to The Grind. At least as measured by a nice straight line.

Maybe there's some local variation that's explainable (he was happy during August, but sad during September), but the point there is that to predict what will happen next, you need much more information than just his past performance. At that point, it's more state than trait. It could also be that these findings are more of a sample-size problem. My work with the manager found a consistent effect, but he gets to "shepherd" 130 or so pitches per night, while a batter might see 15–20. Maybe there's just too much noise to straighten the lines appropriately. Still, even regulars who play almost every day don't show much consistency from year to year. One other possibility that I didn't account for was the team's record or playoff positioning status. As a team fades from contention, do players fade from being interested?

There are more trades made at the trade deadline! That should not surprise you. What might, however, is how many more, exactly, are made: Trade Deadline Visualized, by Sean Dolinar, FanGraphs

July 31 has an average of 8.3 trades with an exponentially growing lead up to the deadline. I’ve annotated a few time frames within which there are lot of different trades: Spring Training, the non-waiver trade deadline, the postseason roster deadline and the winter meetings.

The magic FIP-enhancing potion(s) is (are) none other than BABIP and LOB%. So, luck?: What factors best predict the variance of ERA-FIP among starting pitchers?, by Matt Jackson, Beyond the Box Score

As you may have guess, the change of one unit of BABIP produces the largest change in E-F, but we'll need to do a bit of a correction from the estimate value in the table for this to make sense in the real world. Essentially, for every 10 points a pitchers BABIP goes up, E-F increases by 0.12. That means that if you increase the BABIP for a (qualified) starting pitcher with league average E-F from .290 to .300 and the model predicts that he will under perform his peripherals by 0.12 runs.

Wednesday
Teams can bash their way to win, but their still has to be a certain amount of pitching involvement: Can Blue Jays win with what they've got?, by Dave Cameron, Just a Bit Outside

25 of the 66 teams who fit into this run-differential group got there by putting up a BaseRuns estimate of 4.8 runs per game or more on offense; for the most part, these are teams that hit their way into the postseason, carrying mediocre pitching staffs along the way. As a group, these teams had a BaseRuns expected winning percentage of .558, right in line with the .563 mark that the Blue Jays are currently posting. These were good teams, not great teams, whose strength lied in putting runs on the board.

Starters who are traded and converted to relievers proceed to pitch, well, like relievers: Estimating a starter-to-reliever conversion baseline, by Henry Druschel, Beyond the Box Score

On average, the individual pitcher saw his runs allowed fall by 15% and his strikeouts increase by 3%, but his walks increase by more than a third. Now, there are obviously big error bars on either side of these figures, since they're informed by relatively small samples, but by subtracting the regular season to postseason differential from the regular season starter to postseason reliever differential, the result should be an estimate of starter-to-reliever differential only.

Thursday
Though track record and history are much more important, a scout can't discount the present characteristics — like nerves — that he sees on a player he's scouting for a possible trade: Scouting at the Deadline, by Chris Crawford, Baseball Prospectus

Nerves: “Let’s not kid ourselves, these guys know that they are on the block, and that they are going to be watched more intensely than they ever have been watched before. Usually, they’re coming from a club that’s out of contention and hasn’t played a meaningful game for months, and they’re going to be joining a team that’s competing for a chance to go to the postseason. Obviously, that can be pretty nerve wracking for a player, particularly one that doesn’t have any postseason experience. If he’s nervous about being watched now, how are the nerves going to be when he has to pitch game six in the NLCS? When I say nervous, I mean is he nibbling, is the command way off, is he taking more time between pitches than normal, that sort of thing. Obviously the stuff matters more and you hope that your locker room can help him get settled in, but if I’m going to make a recommendation on a player, it’s sure nice to know that he’s going to be able to handle the situation, though I guess you never really do truly know.”