You've read this before. It wasn't even that long ago. Three weeks ago, BP's own Dan Rozenson wrote about Tyler Clippard and his "split-finger fastball." The quotation marks are because you could argue, and Rozenson does, that Clippard's splitter is actually a forkball. The forkball, for the uninitiated, is a rare variation of a traditional splitter that is noted for its tumbling action and velocity.

At this point I'd like to reference a quote from BP alumnus Mike Fast that Rozenson included in his analysis of Clippard from Fast's article on forkballs:

The terms splitter and forkball are often used interchangeably to describe a pitch where the index and middle fingers are split around the baseball in any fashion. … Nonetheless, very few pitchers actually throw the slow, tumbling, dropping forkball.

The forkball is a rare beast, which is why Rozenson and Harry Pavlidis were so excited upon seeing said pitch in person last summer. That's also why I was excited when, walking through a restaurant, I caught a glimpse of what must have been a forkball on a TV in the bar. I stopped, as if frozen in place, and watched a young Orioles pitcher unfurl forkball after forkball to Christian Yelich in the 10th inning of a 0–0 ballgame.

The young pitcher is O's reliever Oliver Drake, whose backstory befits the unique pitch he throws. Drake was a two-sport athlete in high school, excelling in hockey and baseball, but he quickly found out that baseball was the key to his future. As a 19-year-old senior, Drake began to look for colleges where he could continue playing baseball.

Eventually Drake enrolled in the Naval Academy, where he quickly became a standout on the baseball team. The Academy itself proclaimed that Drake delivered "one of the best freshman seasons on the mound in Navy history." Drake pitched in the Orioles' backyard, but that didn't mean they would have noticed him without some lucky happenstance.

During the summer Drake pitched for a team in the Cal Ripken League that just happened to be coached by Dean Albany, an Orioles scout. It wasn't clear to many teams that Drake was draft-eligible after his sophomore year, but the O's were among the lucky few to have the scouting reports and correct eligibility information about the player prior to the June draft. He was also able to leave the Naval Academy without a five-year military commitment because that doesn't kick in until a midshipman begins his junior year. The Orioles selected him in the 43rd round in 2008 and paid him a $100,000 bonus to join the organization.

Drake spent seven seasons in the Orioles' minor league system after being drafted, but eventually secured a place on the 40-man roster and worked his name into the conversation for a spot in the bullpen. Less than a week ago he was called up, and his wonderful splitter/forkball was unleashed on baseball fans. Drake is one of just three midshipmen to ever appear in an MLB game (but the second in a few weeks this season).

This pitch needs no introduction, because it truly is a thing of beauty. Grip/slo-mo view:

These GIFs are from Drake's May 25th appearance against the Astros. Technically, PITCHf/x gives us the characteristics of this beautiful offering: 84.1 mph at release and -1.6 inches of vertical movement, roughly 4.5 inches more drop than Drake's average forkball this season. Observationally, we can see that the pitch spun roughly eight times along a vertical axis through the horseshoe at the top of the ball next to the MLB logo. It was good enough to fool Chris Carter, starting the eighth inning off with a strikeout for the rookie.

Drake has thrown all of four innings for Baltimore this season, but Buck Showalter hasn't been afraid to throw him into high-leverage situations. Drake threw three innings in a 0–0 ballgame and followed that up with an eighth-inning appearance with the O's holding a one-run lead.

Unfortunately that means that our sample size is hilariously small, so take the following data points with a grain of salt. I do, however, want to give some context to Drake's forkball in terms of basic PITCHf/x attributes. The 32 forkballs that Drake has thrown average 83.4 mph with five inches of horizontal movement and ten inches more drop than his fastball.

He doesn't throw the slowest split-finger pitch, or the one with the most vertical movement. Those superlatives belong to Jason Marquis and Tyler Clippard, respectively. What is interesting about Drake is what his forkball means to his success.

Drake calls it a splitter. At least, he did last season during an interview with David Laurila for the New England Baseball Journal, in which he discussed how he came across the pitch and what it does for him.

My splitter was actually a fall-back plan, back when I was a starter. I really couldn't throw a changeup. […] One day, in the bullpen, I messed around with a splitter. Three days later, I put it in a game. […]

The grip is maybe a little unique. I kind of hold it with my whole hand, with my index and middle fingers split out. My ring finger and pinky are touching together, and my ring finger is touching my middle finger. I find I had more control over the pitch that way — it's easier to control with more of my hand on ball.

My pointer finger runs right up alongside one of the seams. That's where I get most of the movement from. That finger has the pressure on the baseball, and is where it releases when I throw it. My middle finger is spread out as far away from it as I can get it.

While the forkball was born out of necessity, from Drake's need for some kind of changeup, at this point, the forkball is arguably as important a component of Drake's repertoire as his fastball. Fifty-nine percent of the pitches Drake has thrown this season have been forkballs, but even that figure undersells the importance because it doesn't capture Drake's unique approach. 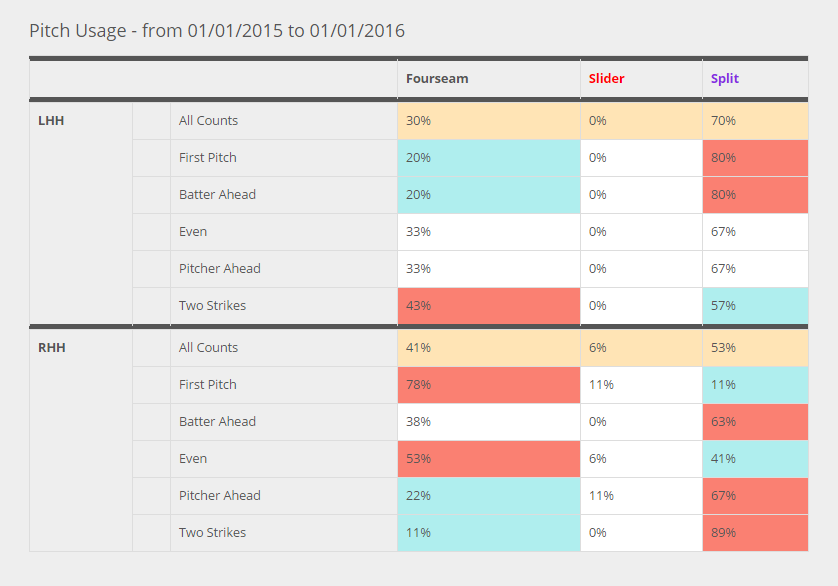 When Drake is ahead against righties, and especially when he has two strikes, they can expect to see plenty of forkballs from Drake. That's not so unusual. But against lefties his approach has been forkball-centric to the point of pitching backward. A source with knowledge of Drake's development confirmed that this falls in line with his pitch usage and general approach through the upper levels of the minor leagues. So while our sample size here is admittedly small, there's reason to believe this isn't just a 13-batter fluke.

We saw this in practice with Drake's two strikeouts against the Astros on the 25th. Carter, the first batter of the inning and a righty, saw the following sequence from Drake:

When Rasmus sees the 84 mph forkball six times over seven pitches, it helps Drake's mid-90s fastball play up late in the at-bat.

Drake has only pitched four innings in Major League Baseball. He may be back down in the minors by the time the week is out. But there's something fearless, enigmatic, and downright beautiful about him and his signature pitch, and that's worth acknowledging.

Thanks to Ian Frazer, Dan Rozenson, and Harry Pavlidis for their help in identifying, analyzing, and GIFing Drake's pitches.