Bryce Harper hit one of the more ridiculous home runs Tuesday night against the Yankees, one of those “oh my goodness I love baseball” ones, on a fast-sinking slider that was about five inches below the strike zone. With what seemed like just a flick of the wrist, Harper had his 10th home run in 12 games. He has as many opposite field homers through 40 games as he did in his first 40 games last year to any field.

With the Yanks in town now for a short series against the Nationals, I recalled the last time I saw these two teams play—three years ago, for a 14-inning affair that the Bombers eventually won, 5-3. Harper had an awful day, 0-for-7 with five strikeouts. Three of them came against Andy Pettitte, who put on a clinic about how to exploit the holes in Harper’s swing. Pettitte repeatedly baited him into swinging at soft cutters diving away from the strike zone, resulting in a number of severely off-balance swings. Here’s Pettitte’s pitch types and locations against Harper from that game, and also from a spring training appearance in 2013: 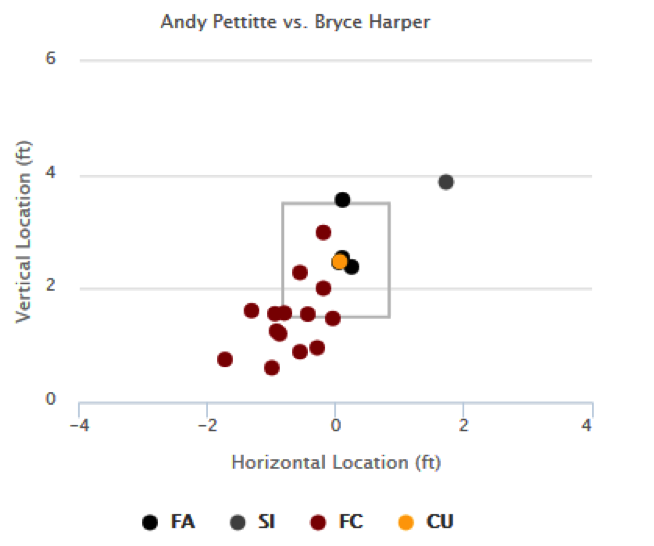 Harper was hopelessly out in front of those pitches and vented his frustration with a string of expletives characteristic of his rookie year.

Hard to believe that was three years ago, huh? In any case, the book was out on how to pitch to Harper early on. Harper saw a three-ball changeup in his second major-league game and walked 16 times that year on sliders, curves, or changeups. Only 53.5 percent of the pitches he saw at all in his rookie season were fastballs of any type, the sixth-lowest rate of over 400 batters who saw at least 500 pitches that year.

Harper’s insane bat speed allowed him to catch up to fastballs almost anywhere in the zone, so pitchers adjusted by throwing slow. Harper failed to fully adjust to the strategy, and was weaker against breaking balls and changeups (.486 and .400 SLG), respectively, than he was against the heat (.523 SLG). The pattern actually worsened in 2013 and 2014, with a combined .332 and .426 SLG against the breakers and changeups vs. .533 against hard pitches. Moreover, a majority of his strikeouts came on non-fastballs, too.

Bryce also struggled with his plate coverage at times. His quickness allowed him to turn on inside fastballs, and he utterly destroyed pitches over the middle of the plate. But his productivity was weaker near the outside corner, especially low. He missed about 20 percent of his swings at balls in the bottom outside corner of the strike zone—27 percent of the time when it was coming from a lefty.

But things are different now. If you want to know why Harper’s walk rate has skyrocketed this year, it’s probably because no pitch is safe to throw him in the strike zone. The once-safe strategy of throwing breaking balls over and over again is not advisable anymore. Check this out. 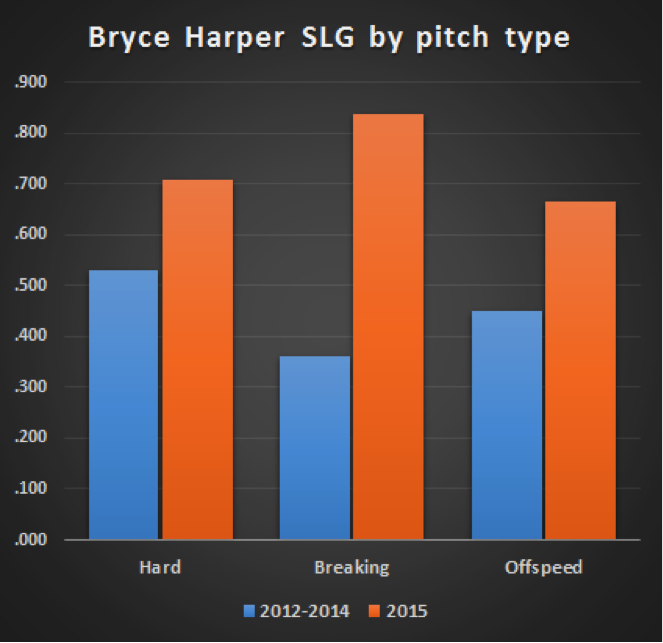 He’s slugging over .650 against every pitch category and has more than doubled his slugging against breaking balls. Not only that, he’s crushing the outside pitches now, too. His 2012-2014 SLG against pitches on the outer third of the plate was .631, but so far this year he’s slugging 1.538 on those pitches. In a limited sample size of 18 plate appearances, he’s nearly matched his previous years’ slugging percentage (at .625) on pitches off the plate outside. With plate coverage like that, it’s no wonder pitchers don’t know what to do. (“Sorry, rookie. You can’t throw him the soft stuff anymore. Try to bust him inside with your 89 mph fastball. Trust me.”)

To what can we attribute Harper’s success against these prior weaknesses? I asked our own Ryan Parker, who cited the recent addition of a hitch in Harper’s swing—a little forward bump of the bat head right before his swing starts. Coaches sometimes tell hitters to take hitches out of their swings, as sometimes they lengthen a hitter’s swing and prevent them from reaching pitches in time. But for guys with elite bat speed—people like Barry Bonds, Gary Sheffield, and a number of other members of the 500 home run club—a hitch can actually help their timing and plate coverage. See below, where Ryan picked a swing of Harper’s from early in the season (left) and one from this month.

It’s pretty exciting to think how Harper’s natural growth and subtle adjustments can unlock his potential, just as Mike Trout figured out how to hit high fastballs. Pitchers are going to have get creative now to consistently avoid danger, because they’re throwing him more fastballs than ever and still not getting favorable results. Pitching to Ryan Zimmerman with a runner on first might become the league standard now.

You need to be logged in to comment. Login or Subscribe
ArseneLupinIII
I was at the 14 inning game. We ran out of nips bottles in the 10th. :(
Reply to ArseneLupinIII
therealn0d
What are the chances Harper ends up being better than Trout for the next six or so years?
Reply to therealn0d
huztlers
0% unless Trout stops playing baseball. They are not the same caliber of player. Harper has great offensive potential (so does Trout), but Trout is elite in CF and on the base-paths. Harper simply gets ejected too frequently to match Trout's counting stats. On a more serious note, who do you think is more durable?
Reply to huztlers
Ogremace
Orly
Reply to Ogremace
Loughy
In terms of being a better all around player, it isn't going to happen. From an offensive standpoint, Harper WILL be better than Trout.

Reply to Loughy
therealn0d
If all around encompasses the totality of their offense and defense, and you are sure that Harper will be the better offensive player, how can you be so sure? Trout has already lost some of his basestealing value and given what we know about what we don't know about defense...
Reply to therealn0d
PigPen
Given how down power is across baseball, I'd say there's a decent chance. Harper and Giancarlo Stanton are pretty much regarded as the only two guys in baseball with 80 power (until Joey Gallo gets there anyway), so it's a matter of how often they can barrel the ball up. Harper is looking Bondsian the way he is spitting on balls outside the zone and crushing balls in the zone. Mike Trout is an excellent defender, but if Harper turns into Bonds circa 2001-2004, with defense and some speed on the bases that would be something I'm not sure Trout could match.