The Wednesday Takeaway
Most baseball fans reassured themselves that Corey Kluber’s less-than-stellar start to the season was nothing to worry about. Given his slow beginning last season,

the stingy run and defensive support he has received—2.4 runs per game and a -7.4 team UZR, respectively—and his solid peripherals (including a 3.16 xFIP and 3.70 DRA), many felt it was only a matter of time before the reigning Cy Young Award winner returned to his old form.

But nobody quite expected this:

On a chilly Cleveland night, Kluber tied Bob Feller for the most strikeouts in a nine-inning game in Indians history—only behind Luis Tiant’s July 3, 1968 10-inning, 19-strikeout masterpiece in total Ks—and struck out the most batters in a big-league game since Ben Sheets fanned 18 nearly 11 years ago. Kluber also tied Randy Johnson for the most strikeouts in an eight-inning performance since 1914.

The righthander’s no-hit bid stayed intact until the top of the seventh, when former Indian Jhonny Peralta mustered a single. It was the only hit that the Redbirds, who own baseball’s best record and have the league’s seventh-fewest strikeouts, would tally the entire night. Kluber’s Game Score was good for 98, easily the best this season.

Kluber’s out pitch varied throughout the night, as he chose at times to get the batters with his breaking ball,

or overpower them with a fastball.

Really, it boils down to a very simple formula:

When Corey Kluber strikes out 18 batters in a game this season, he's 1-0. When he doesn't, he's 0-5. Seems pretty clear cut to me #analytics

Quick Hits From Wednesday
Oakland entered Wednesday last in the American League West, having halted a six-game losing streak only the previous night. The A's 13-22 record belied a run differential of +3 and an 18-17 Pythagorean record. Their 166 runs are third best in baseball. Four of those six losses were by one run, so the A’s were bound to break the streak at some point. On the other hand, the A's had arguably been beneficiaries of good luck and good timing: Despite middle-of-the-pack OBP and SLGs, they had the third-best offense in the game because they had fared so well with runners in scoring position.

With Sonny Gray on the bump, the A’s looked to make it two straight. As Chris Mosch wrote in yesterday’s What You Need To Know, Gray has been utilizing the slider more often this season, with great results. At .254, his opponents’ BABIP is a little low, indicating he would be hard-pressed to maintain that 1.65 ERA, although DRA does love him, ranking him third in the game.

The Red Sox weren’t so hot coming into Wednesday either. They had been outscored 27-52 in their past 10 games, during which they had gone 3-7. With Wade Miley—perhaps the worst member of the Red Sox anti-super rotation—on the hill, the Sox’s chances didn’t look too good.

It makes perfect sense, then, that Miley turned in his best start of the season, shutting out the A’s for 6.2 innings.

The A’s had the opposite problem yesterday that they’ve had all season: The RISP magic was revealed to be an illusion. Despite having runners on in each of the first six innings—including a Marcus Semien third-inning triple—they simply couldn’t push any runs across. Following Semien's swing, Josh Reddick popped out, Billy Butler flied out, and Brett Lawrie grounded out.

Miley certainly wasn’t dominating, striking out only one batter all day. Yet, he was helped along by an A’s offense that went 0-for-14 with runners in scoring position. It was an almost historic performance:

Gray was no slouch by any means, striking out nine over seven innings while allowing only three hits and no walks. His sole blemish was a bloop single to Daniel Nava in the second inning that drove in Hanley Ramirez, a bloop that probably should have been caught by Coco Crisp. It's no consolation to Gray now, but Crisp did everything he could to make up for the misplay, getting his first hit of the year and making a tumbling catch and, later,

The Red Sox added to this lead in the eighth with Marcus Semiens’ league-leading 12th–er, make that 11th–error. That’s a league-leading 35 errors for the Athletics this season, contributing to their near-league-worst -15.4 total UZR, largely fueled by Semien’s league-worst -4.4 UZR among shortstops. Yikes, again.

Had this been 2011, Wednesday’s Nationals-Diamondbacks game would’ve featured a highly touted matchup of Gio Gonzalez, an All-Star, against Jeremy Hellickson, the eventual American League Rookie of the Year.

In 2015, however, such a game doesn’t quite strike the same excitement. Gonzalez entered Wednesday with a 3.62 ERA in 37.1 innings, posting two solid starts in May after scuffling in April. Hellickson hasn’t been effective since 2012 and is the 13th-worst pitcher by DRA this season among qualified pitchers.

As such, the game saw some pretty lackluster pitching on both ends. Hellickson ended up outdueling Gonzalez in this non-pitchers duel, as he allowed four runs in 5 2/3 innings to Gonzalez’s five in five. Gonzalez was relieved by Tanner Roark, who disappointed Effectively Wild fans everywhere by continuing his recent strikeout binge.

The story of the day for the Nationals would not be Bryce Harper. Although he of the 1.565 slugging percentage in his previous six games did smack a double in the second inning, his most notable action of the game came when he was punched out on a checked-swing strike three and was ejected along with manager Matt Williams for arguing the call.

This forced acting manager Randy Knorr to insert Michael A. Taylor—not Michael D. Taylor, the guy with the .167 career batting average who was once traded for Roy Halladay—in Harper’s place, and he did not disappoint, popping a grand slam with one out in the top of the ninth inning to give the Nationals a 9-6 edge and handing Addison Reed his second loss of the season.

After winning four of their previous five, the Mets entered Wednesday having dropped the first two games of the series to the Cubs and looked to hold their division lead over the Nationals by salvaging the final game of the series.

They had a pretty good pitcher on the mound to help them do it: Matt Harvey, who has returned to his dominant self after his year-and-a-half Tommy John rehab. Harvey was coming off a loss to the Phillies in his last outing but had put up a 2.72 ERA with a stellar 0.96 WHIP in 39.2 innings.

However, Jason Hammel would not let the game get away from the Cubs, as he held the Mets to just one run in eight innings. The Cubs tied the game in the bottom of the eighth on a Dexter Fowler RBI single. Back-to-back singles by the Cubs in the bottom of the ninth caused the Mets to make the decision to walk Miguel Montero to get to Jorge Soler. After replacing Carlos Torres with Jeurys Familia, the Mets started to look somewhat smart after striking out Jorge Soler—although, really, you just have to have a working arm and a ball to do that sometimes—but it all came crashing down when Familia walked Chris Coghlan—the owner of a .208/.276/.406 slash line this season—for the walk-off walk.

With this, Familia joins an ignominious group of pitchers who have walked in the winning run, a group that includes Kyle Farnsworth and…nope, I’m just going to leave it there, because, really, doesn’t that just seem like the quintessential Kyle Farnsworth thing to do?

For the first time in their careers, Johnny Cueto and Tim Lincecum will toe the rubber against each other when the Giants take on the Reds this evening. It’s somewhat surprising to think that the two smallish hurlers have never faced each other, given that this is their eighth season in the league together.

Two years older than Cueto, Lincecum’s Cy Young Award-winning 2008 and 2009 campaigns came as the Reds righty was putting up a 93 ERA+ and allowing 9.1 H/9 in 345 innings in his first two big-league seasons. Just as Lincecum’s velocity and performance were beginning to come down a bit in 2010, Cueto turned in a solid season for the Reds, putting up 2.2 bWAR. When Cueto established himself as one of the game’s best pitchers in 2012 with a fourth-place Cy Young award finish, Lincecum fell off the earth in his age-28 season with a disastrous 68 ERA+ and -1.7 bWAR. By contrast, Cueto’s age-28 season in 2014 was his best yet. 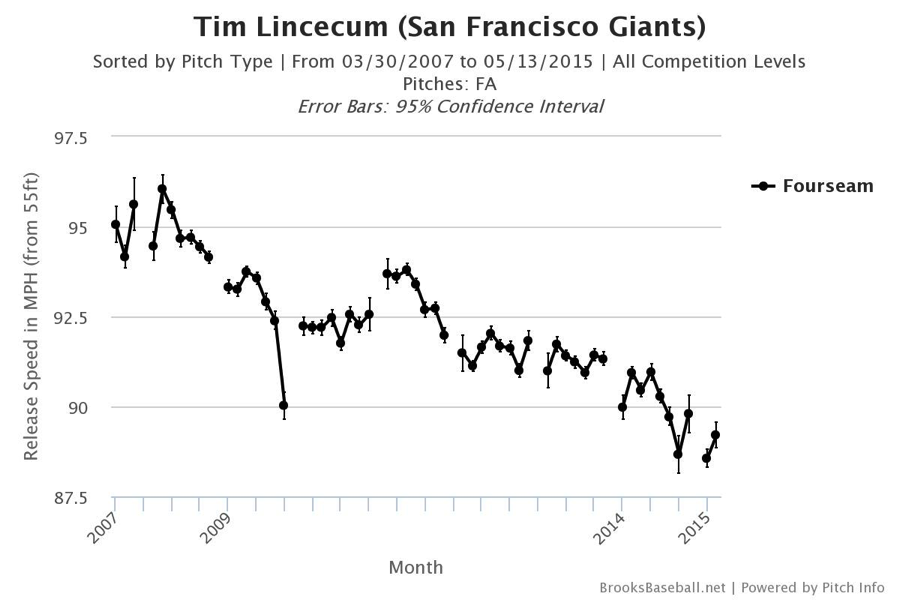 While similar concerns existed for the 5-foot-11 Cueto, he has consistently averaged 93-94 mph with his heater throughout his eight-year career. 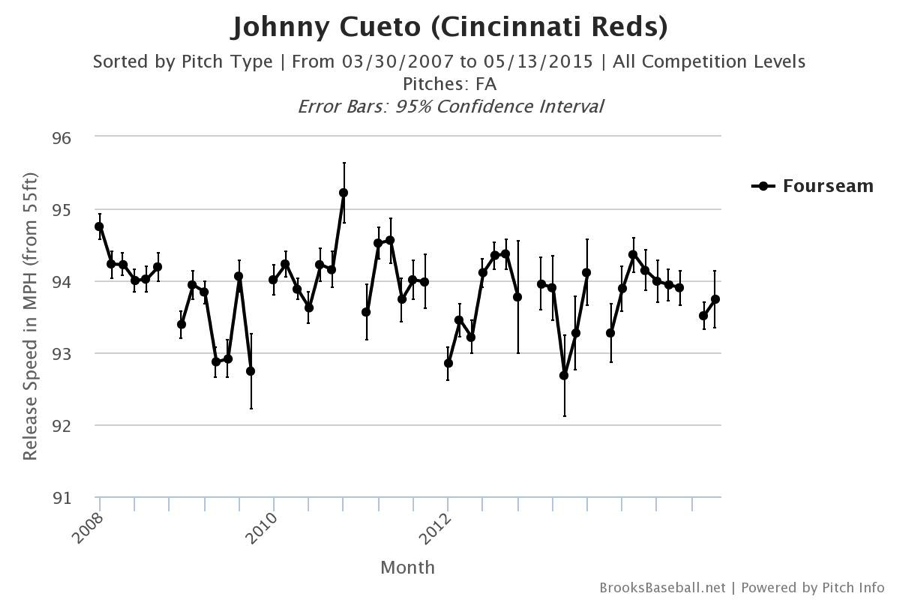 Yet, despite these opposite trajectories, we find ourselves with a good possibility of a pitchers duel tonight. Lincecum has put up a 2.00 ERA in 36 innings so far—good for 10th in the baseball—with some suggesting that he’s finally adjusted to his velocity decline by revamping himself as a groundball pitcher. However, xFIP (3.85) and DRA (3.76) don’t like him quite as much, as those metrics place him 49th and 60th in the game, respectively. Cueto is coming off two lackluster starts and will look to reverse that against the Giants’ punchless offense. Keep an eye as these two undersized righties battle it out (7:10 PM EST).

You need to be logged in to comment. Login or Subscribe
PigPen
Major League baseball really should make a rule precluding umpires from determining whether or not someone swung from behind the plate. For the last 50 or so years, players have correctly argued that the umpire can't see both the pitch and the swing, and that's before we even get to the fact they're at the wrong angle. I know many will say Harper needs to control his emotions, but it incenses players on another level, I believe in large part because it's so easily rectified, and he's not alone. Umpires get bashed a lot, but they often show how much their attitudes deserve it.
Reply to PigPen
therealn0d
Players (both sides) are allowed to ask for an appeal to either the first base or third base umpire. Why doesn't that happen in this case?
Reply to therealn0d
PastorStephen
Actually, according to Rule 9.02(c), a check swing can only be appealed by the defensive team if it is ruled the batter did not go around. It cannot be appealed by the offensive player or manager on a check swing that is ruled to have gone through the zone for a strike.