So far the Mariners have been one of the season's biggest disappointments. At 15-17, they sit closer to last place than first—a position echoed by their -13 run differential, the second worst in the division. Naturally, Seattle's roster houses numerous underachievers. Felix Hernandez and Nelson Cruz have been excellent, but haven't outweighed the slow starts of Robinson Cano, Austin Jackson, and Fernando Rodney, nor the struggles of Mike Zunino, Brad Miller, Kyle Seager, Dustin Ackley, James Paxton, and . . . well, just about every non-royal homegrown player on the roster.

Taijuan Walker's performance might be the least fulfilling of the drafted-and-developed bunch. After six turns through the rotation, Walker has the highest DRA among big-league starting pitchers. His Game Scores have been (in order): 7, 29, 60, 67, 12, and 49—or more bad than good, and more scattered than fixed. Old stats tell the same tale. Walker has not flourished like a cockatoo in a birdbath; instead he's languished to the point of allowing 27 runs and 39 hits in 27 2/3 innings.

Walker then is the perfect microcosm of the Mariners as a whole, since neither has progressed as planned. But whereas the Mariners' fall from preseason darling is easy to grasp—struggling players beget struggling teams—Walker's descent is tougher to comprehend.

It wasn't long ago Walker served as the idealist's young pitcher. He had the size, stuff, athleticism, and mindset to become a front-of-the-rotation staple. Onlookers who considered those attributes—his 6-foot-4 frame; mid-to-upper-90s fastball, devastating cutter, promising curveball; dunking ability; and competitive nature—couldn't help but say things they didn't know they meant; hence an intelligent fan base scoffing at a Walker-for-David Price swap. These days, Walker's ability to inspire gibberish has turned; the common response to his pitching remains unprintable, albeit not unintelligible. The cause? Walker exists at the worst intersection, between promising and frustrating, inconsistent and predictable.

Walker's troubles in 2015 begin with his arsenal. His fastball remains his finest pitch, sitting in the mid-90s with enough life to miss barrels and bats. Likewise, time hasn't displaced Walker's cutter as his best secondary offering. But things get dicey after that, because time hasn't seen his repertoire mature as anticipated, either. Few pitchers—especially rookies—feature three plus or better pitches; that isn't (or shouldn't be) the expectation with Walker. Rather, Walker's problem is that his third and fourth pitches—a once-promising curve and a splitter (sometimes called a changeup)—have accounted for a quarter of his usage despite limited usability. To wit, here's Walker's curveball location chart: 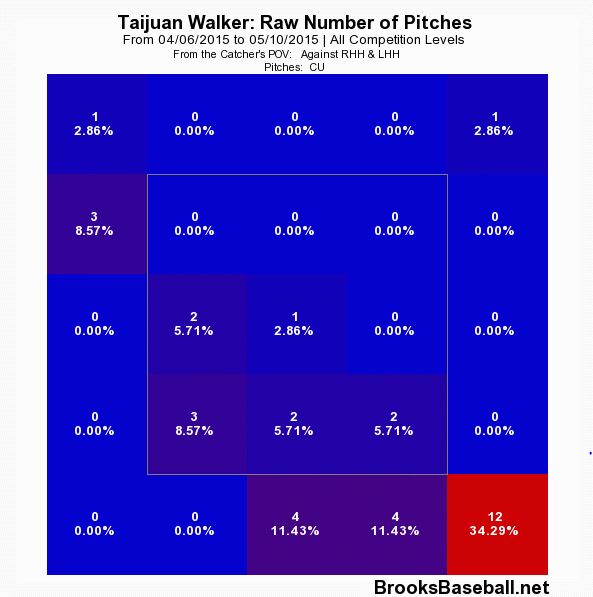 You could call that a chase pitch, except batters almost never pursue Walker's curveball. Nor is Walker's hook a get-me-over offering: 60 percent have been called balls this season, leading to a 0.13 called strike-to-ball ratio—or the seventh-worst mark among starters (min. 25 curves). Poor results aside, you can understand why Walker continues to throw his mid-70s curve in an attempt to change eye levels and/or reaction times (the rest of his pitches sit within six mph of each other). Too often, though, the curve is poorly thrown, leading to wasted pitches or, in the worst cases, scenes like this:

Similar issues plague Walker's splitter. There are enough instances of Walker leaving the pitch up and/or in hittable locations that it shouldn't be a surprise to learn he has the majors' worst TAv-against on splitters. Conversely, when the pitch isn't missing high, it's missing low—to the point where his splitter coerces the second-lowest percentage of swings in the game (this is where the pitch-tipping allegations come into play as well). Those conditions render what should be an interesting offering (due to its status as the fastest splitter among starters) a liability.

As such the present version of Walker deserves the dreaded two-pitch starter label. That can work, but it requires quality location and sequencing. Think about Chris Archer, who continues to lean on his fastball and slider while nurturing his changeup. What makes Archer effective is how he uses his two pitches to create more than two different looks, especially against lefties: his fastball's run allows him to pepper the outside corner, but he'll salt the inner corner with a straighter four-seamer; with his slider he'll back-foot it just as sure as he'll throw a baby version for a strike on the outer half. Archer is fastball-slider throughout, yet the variation in spots and sequences makes his arsenal play deeper.

Walker, at least for the time being, doesn't have the command to play the shell game the way Archer does. He shows little interest working inside with his fastball against left-handed hitters, and it's hard to say he would be better off if he tried to go inside more often. His imprecision is evident even with him working away from lefties, as he elevates his fastball too often for comfort. Part of the blame belongs to his mechanics. Though Walker has altered aspects of his delivery since his big-league debut, he remains a short-strider—an unusual characteristic for a pitcher with so much size and athleticism, and one that might contribute to his shaky location:

And that's the most disheartening aspect of Walker's struggles: every flaw has been in place for years. "Walker can often look more like a reliever who is starting than a true starter," wrote Jason Parks in December 2012, "so he will need to add more nuance to [his arsenal.]" Half a year later, Jason Cole noted Walker had "command and secondary consistency issues to iron out." More than a season has passed since, yet Walker hasn't grown as desired. Granted, some of this stagnation has to do with him missing time in 2014 due to right shoulder inflammation. Is there any reason for optimism? Yes.

The Mariners lack the rotation depth to move Walker to the bullpen during the coming months, but there's a good chance his numbers remain on the ugly side heading forward. Still, it's too early to quit on him as a starting pitcher. Walker's on-setting prospect fatigue belies his youth and inexperience. He's younger than Trevor Bauer, Kevin Gausman, and Carlos Martinez—three pitchers also trying to crack their teams' rotations for good—and has fewer big-league innings than the trio, too. Besides, while his performance to date necessitates us to focus on the negatives, certain positives continue to exist—most notably his fastball-cutter combination and outstanding athleticism.

Viewed in certain lighting, Walker is a reminder that progress is never guaranteed for young players. Yet the narrative could change in the coming months or years. It's possible Walker never takes the steps forward needed to become more than a no. 4 starter; it's also possible that he does, thereby reminding us again how progress is often linear only in our daydreams.

You need to be logged in to comment. Login or Subscribe
TGT969
Looks to me this guy needs to be traded to a team that knows how to
fix a pitcher.
Reply to TGT969
bhalpern
So not the Orioles? - O's fan ;(
Reply to bhalpern
hyprvypr
He'd probably be a Cy Young pitcher next year on the Indians.
Reply to hyprvypr