The Red Sox are struggling, and while no team is to be condemned this early in a season, they seem to be in some real trouble. They’re 14-17, but, more importantly, they’ve scored only 135 runs. At this pace, they’ll score 705 over the full season. They’re below the American League average in runs per game, which indicates a downright weak offense, if it happens at Fenway Park. We knew their run prevention would be poor, but to whatever extent their ineffectiveness at bat is a real phenomenon, it’s crippling. Boston needs a juggernaut of an offense to win the AL East, and a near-elite one just to remain competitive.

The question we most need to answer, then, is whether they have such an offense. Is the mess the team has been in the early going its real identity, or are things about to turn around? To answer that, we need to get a handle on what the team does well, what it does poorly, and from where the problems they have had so far are coming.

I see at least three problems that are affecting the Red Sox at a macro level:

Underachievers
Four Red Sox with long (or longish) track records as good hitters have, thus far, been terrible hitters. The four are Mike Napoli, Shane Victorino, Allen Craig and Daniel Nava, and the bad news is, there isn’t that much hope that any of them will turn things around. Victorino is old, and his body is betraying him completely. Craig and Nava are moving past 30, having not blossomed until their late 20s, showing no sign of being able to sustain whatever it was that made them so hard for opposing pitchers to figure out for a year or two. Napoli will bounce back to some extent—he’s still walking a lot, and is actually striking out less than he has since 2011—but seems not to have the ability to find a mistake and put it in the Monster seats anymore. He’s hitting more ground balls than ever, and when he does get air under it, he’s clearing fewer fences.

Luckily, the Red Sox are deep, as well as explosive, so they should be able to overcome these players’ sharp declines—as long as they acknowledge the reality of the situations, and replace the players in question proactively.

A Too-Patient Approach
Only the Dodgers have a higher walk rate than the Red Sox right now, and only four teams have a lower strikeout rate. Boston is controlling the strike zone better than any team in baseball. They have a .258 team BABIP, which is the lowest in the league, but more importantly, would be the lowest in over 35 years. That number won’t stay that low; it won’t stay nearly that low. And once it does bounce back, if the team can maintain the walk and strikeout numbers they’ve posted to this point, they should be one of the best in the league in OBP.

Here’s the problem with all of that rosy talk: The Red Sox are approaching their plate appearances in an outmoded way. They’re drawing a lot of walks because pitchers are letting them do so. They’re making more contact at the cost of hard contact, and especially, at the cost of power on contact. The Sox are swinging at the first pitch just 18.4 percent of the time, easily the lowest rate in MLB. And they're doing so in the worst era to do so: If the 2015 season ended today, it would break the 2014 season’s record for best aggregate performance by batters who swing at the first pitch, relative to those who don’t. Through Sunday, hitters who stepped into the box hacking were slugging .422, while those who took the first offering were slugging .382. The Red Sox’s long-held take-and-rake theory is falling apart. Pitchers have learned how to minimize damage against that kind of offense, and as a result, that kind of offense is no longer the advisable way of doing things. If the Sox can’t become more aggressive and find pitches to hit earlier in counts, they’re in real trouble.

Their Times Through the Order Splits
As you’ve likely heard (dozens of times, maybe hundreds), one good reason for working the count and drawing walks has always been that it wears down the opponent. Push up the opponent’s pitch count, get to the soft underbelly of an opposing bullpen, and tear the other team to ribbons. This works, at least insofar as the most patient teams put the most pressure on the opposing pitching staff. The Yankees, A’s, Blue Jays, Indians, Red Sox and Dodgers—six patient, veteran lineups famous for working the count—are the top six teams in terms of percentage of plate appearances coming against relievers.

The problem is that many bullpens no longer have a soft underbelly. The league is hitting a collective .235/.310/.363 against relief arms this season, the worst performance (relative to the league as a whole) on record. Batters strike out 21.7 percent of the time against relievers. It’s not an absolute good to get an extra at-bat against the Juan Nicasios and Radhames Lizes of the world. Eight bullpens have a sub-3.00 ERA this season, and while that’s unlikely to last, the broader point stands.

Boston Red Sox, By Time Through the Order, 2015

It would seem that, in this age when managers are conscious not only of allowing a pitcher to ever pitch while tired, but of minimizing a hurler’s exposure on any given night, the Red Sox are more dependent than any team in baseball on getting a good, long third look at the opposing starter. That model of run production is not only volatile (since it depends on scoring runs in bunches, in a burst so violent as to give the opponent no time to react), but nearly obsolete. Starters have faced 24.5 batters per start this season, the lowest figure ever: 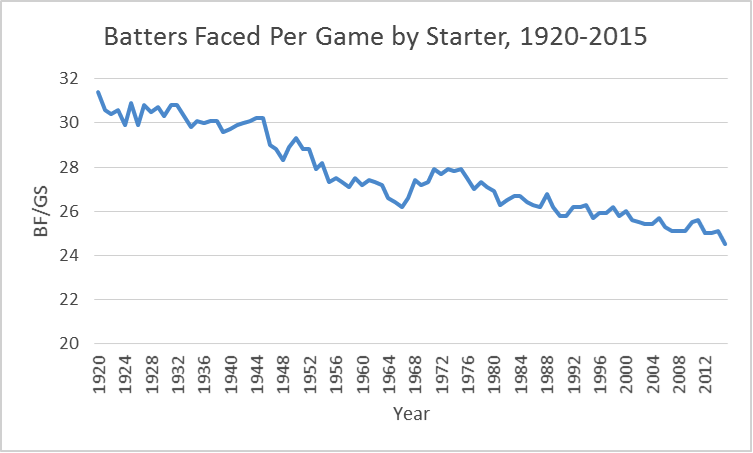 Now, maybe this is just noise, something time will iron out. There’s a column I didn’t show you in the table above, one that might give that impression: 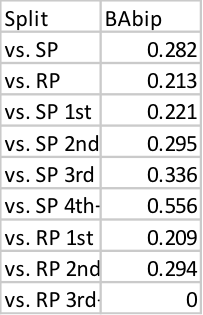 I’m not terribly convinced by the luck argument, though. The Red Sox have a unique approach, and a unique recent history, in terms of the way their team hits. The 2013 Sox had the highest team BABIP this side of Herbert Hoover’s presidency. That team also had an arrestingly large number of guys who fit a certain mold: patient, strikeout-prone, but with lots of power, and the ability to foul off pitches they didn’t square up, instead of weakly putting them in play. Any team at a philosophical extreme in a particular aspect of the game has to be evaluated on that aspect a little differently than other teams are, and no team is more extreme in its philosophy at the plate than Boston. In my opinion, the Red Sox have a fundamental problem on offense that isn’t captured by reading their individual stats or nodding toward the usual peripheral indicators.

It’s not that the way the Sox do their offensive business is wrong, per se. It’s just that it seems to have been built for the last decade, not this one. It can succeed even now, but doing so will require some moderation. An extreme commitment to taking pitches, seeking deep counts and working out of two-strike holes is not conducive to scoring runs in the modern environment. It’s not an organization or a city known for moderation, but that’s what Boston needs. Without it, the Bam-Bam BoSox aren’t going to be able to outslug their defensive shortfalls.

You need to be logged in to comment. Login or Subscribe
bhacking
I'm not surprised the offense is struggling, what still really confuses me is how they won the world series in 2013. It seemed like almost ever play achieved their maximum results that season.

How Rusney Castillo hasn't made the 2015 team yet IS hard to understand. What do they still see in Victorino?
Reply to bhacking
geoharky
Rusney Castillo is on the minor league DL, he hurt himself in early April.
Reply to geoharky
bigchiefbc
Rusney is actually back off the DL, hitting in Pawtucket right now. He hasn't really found his stroke yet, but I'd still love for the Sox to give him a shot. He's not a young kid, he's 27.
Reply to bigchiefbc
jfranco77
Remember last year when Mike Moustakas kept making bad contact? His K rate wasn't bad, despite having terrible swings most of the time, because he could make weak contact instead of striking out. It looks like the entire Red Sox team has replicated that approach.

Take it with a mountain of salt, but the Red Sox have te highest percentage of "soft" contact according to Fangraphs this year. And they're 25th in "hard" contact.
Reply to jfranco77