Stephen Strasburg is finally resolving the dissonance we have all felt about him for five years. Ever since his debut performance raised unreasonably high expectations even higher, Strasburg has been chasing the ghost of his own future, pitching stunningly well, but never well enough to clear the bar people set for him. Strasburg was worth 8.5 WARP from 2012-14, according to DRA, and that’s despite the degree to which the Nationals kept training wheels on him after his Tommy John surgery in 2010. Strasburg led all starters in strikeout rate in 2012, and led the NL in both strikeouts and games started last season. It’s been difficult to reconcile his dominance with the feeling that something is missing. Happily, that dilemma feels distant now.

Much less happily, of course, the reason for the decreased tension there is that it’s now much easier to simply call Strasburg, at least this season, disappointing. In six starts this season (the last of which ended with him leaving with shoulder discomfort, although the early indications are as comforting as possible), Strasburg has a 4.73 ERA and a 4.90 DRA. His FIP does come in at a tidy 2.77 (thanks to 32 strikeouts, 10 walks and only one home run allowed), and his .398 BABIP tells us that he’s going to get some help from regression soon, but DRA is king for a reason: you can watch Strasburg and know better than to think he’s simply encountering bad luck.

No, Strasburg’s struggles this season stem from a real set of changes. He’s throwing his fastball a little more often this season than he has in the past: 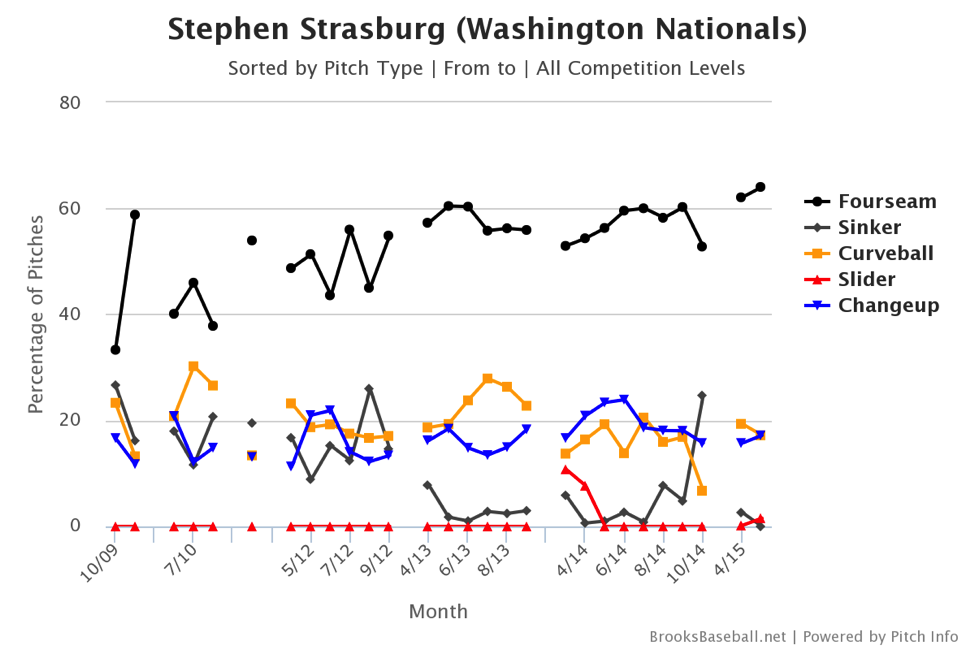 He’s also pounding the zone more than ever:

For learners more mathematical than visual, Strasburg’s Zone Rate this season—the percentage of all his pitches BP marks as being inside the strike zone—is over 58 percent. Only Phil Hughes and Bartolo Colon have higher figures. That catches the eye, because for the most part, pitchers are consistent in this regard. Hughes and Colon, among others, have been filling up the zone for a few years. Strasburg was 58th in Zone Rate last season, among 125 qualifying pitchers (threw at least 2,000 pitches). In 2013, he was 72nd out of 120. Very rare are the cases of transformations this extreme, from a guy working the edges of the zone and aiming for strikeouts, into an absolute strike machine whose goal appears to be avoiding walks.

Alas, if that’s Strasburg’s reason for changing tack, it isn’t working. His 6.7-percent walk rate is higher than last season’s; he walked only one in every 20 opponents then. That’s because, when he does throw pitches outside the zone, batters aren’t chasing as often as they have in the past. Over Strasburg’s career, batters have chased over 31 percent of the bad ones. In 2015, though, that number is 24 percent. Part of that has to be that more of those pitches are fastballs, which few batters are tempted to chase, whereas they might chase curves and changeups. Another part, though, and a more interesting one: they’re not swinging at his curveball. Opponents swung at 39.9 percent of all Strasburg curves last season. This year, it’s 23.3 percent. There’s no obvious difference in release point, either from his fastball to his curve or from his curve in the past to his curve now. Perhaps the issue is that he’s becoming too predictable: batters see his four-seam heat 80 percent of the time when they’re ahead in the count. He’s throwing the hook more often this season, especially to lefties, but only when he gets ahead, and especially when he has two strikes on the batter. It might be that he’s tipping the pitch, or it might be that he needs to mix things up better as at-bats progress.

One way or another, Strasburg is finding it hard to get the ball by people. His strikeout rate is down, to what would be (by a mile) a career low of 21.3 percent. All of his pitches have seen their whiff rates per swing drop precipitously this year. After two seasons as a solid groundball guy, he’s also seeing opponents lift the ball much more often against him. His line-drive rate against would be a career-worst mark, if it holds, and though he’s allowed only one homer to date, it’s unlikely his 2.0-percent home run rate on fly balls will sustain itself for long.

It would be easy to dismiss all of this as small-sample noise or a health-related hiccup, if Strasburg’s injury were a more grave concern—if, indeed, there were any indication that he was seriously hurt, other than his premature departure this week. It isn’t, and there isn’t. His velocity is essentially unchanged, for all his pitches. He’s throwing more strikes; we would expect fewer from a damaged arm. The problem with Strasburg, it seems, is that he’s trying too hard to be a player he isn’t. Hughes and Colon live for the backward ‘K’, for getting ahead with the first pitch and never looking back. They pound the zone because they rely so heavily on their heat that they have nothing with which to lead opponents out of the zone, nothing with which to induce those ugly swings on balls in the dirt.

Strasburg has those weapons in his arsenal, though, or at least, he has had them for years. Maybe they’re eroding, or maybe an injury is preventing him from finishing on them (that is one thing Matt Williams mentioned specifically when speaking with the media, but in general, a pitcher who physically can’t finish his delivery doesn’t begin dotting the strike zone the way Strasburg has), but as far as we know, they’re still there. Strasburg’s fastball command has always been a bit loose. He gets a little more of the plate with it than he ought to, sometimes. He throws it for strikes, but not always for pitchers’ strikes. Because he has nasty stuff with which to keep hitters off-balance, and because his good velocity limits the degree to which a hitter can react and exploit his mistakes within the zone, he has always more than survived that shortcoming. If he starts trying to imitate pitchers with far superior fastball command, though, he’s no longer going to do so. Once healthy, he needs to ease off his fastball use, and get out of the strike zone more often.

You need to be logged in to comment. Login or Subscribe
GRTrouble
I've seen him have a serious issue locating his off speed. For years he's been most effective when early in the game when guys are sitting on his FB he puts some offspeed in for strikes, and then gets them to chase later in the game with two strikes.

His change up has really been out of the zone this year. I'd like to see the vertical movement on his curve as well, it's looked less "snappy". All by eye test, can't get to Brooks right now.
Reply to GRTrouble