“The terms splitter and forkball are often used interchangeably to describe a pitch where the index and middle fingers are split around the baseball in any fashion. … Nonetheless, very few pitchers actually throw the slow, tumbling, dropping forkball.” – Mike Fast

On June 20th at Nationals Park last year, Harry Pavlidis and I were sitting up about 30 rows behind the Nationals dugout, giving us a great side view of pitch trajectories. “Aha!” I exclaimed as we saw Tyler Clippard’s split-finger fastball for the first time. We’d already seen his changeup in that at-bat, and it was obvious by the huge diving action of the split that it was not the same circle-change that had made him famous. No, this pitch is “nasty, dirty, rotten, filthy” in the words of F.P. Santangelo.

Late in 2013, Clippard debuted the new pitch after tinkering with it for years and incorporating it into a bullpen session. It took me by surprise that Clippard would bring out a splitter, of all things. He already threw four pitches regularly: a four-seamer, a slow cutter, a fringy curveball, and his main weapon—the circle change. They worked wonderfully for him, giving him a 2.72 ERA and 10.3 K/9 as a Nats relief pitcher from 2009-2013. They have also combined with his straight-over-the-top arm angle to create an extreme fly ball tendency and correspondingly low career BABIP.

One reason in particular I was surprised at his new pitch is that it’s unusual for pitchers to throw both a standard changeup and a splitter. The reason for that is because they usually serve the same purpose—to change speeds from the fastball and provide a fading counterpart to the pitcher’s breaking ball(s). Clippard’s changeup does exactly that—it is essentially a 10 mph slower version of his fastball with slightly more tail. It’s a fastball with a parachute behind it. Here’s what it looks like.

It’s actually pretty tempting to say we’ve found a mythical forkball. To refresh your memory on the difference between the two pitches, a splitter is a variant of a changeup with a split-finger grip. A forkball is a unique pitch that sometimes can resemble a knuckleball in its unpredictability. Very few pitches in recent years—among them, Scott Linebrink and Jose Contreras—have actually used one consistently. (Please do consult Mike Fast’s 2010 Baseball Prospectus article on the subject, the most authoritative one there is.)

One of the defining features can be spin pattern that resembles a breaking ball more than an off-speed pitch. In the chart below are all of Clippard’s 2015 pitches graphed by spin deflection. The splitter almost always has topspin rather than backspin, as you would see in an ordinary off-speed pitch. 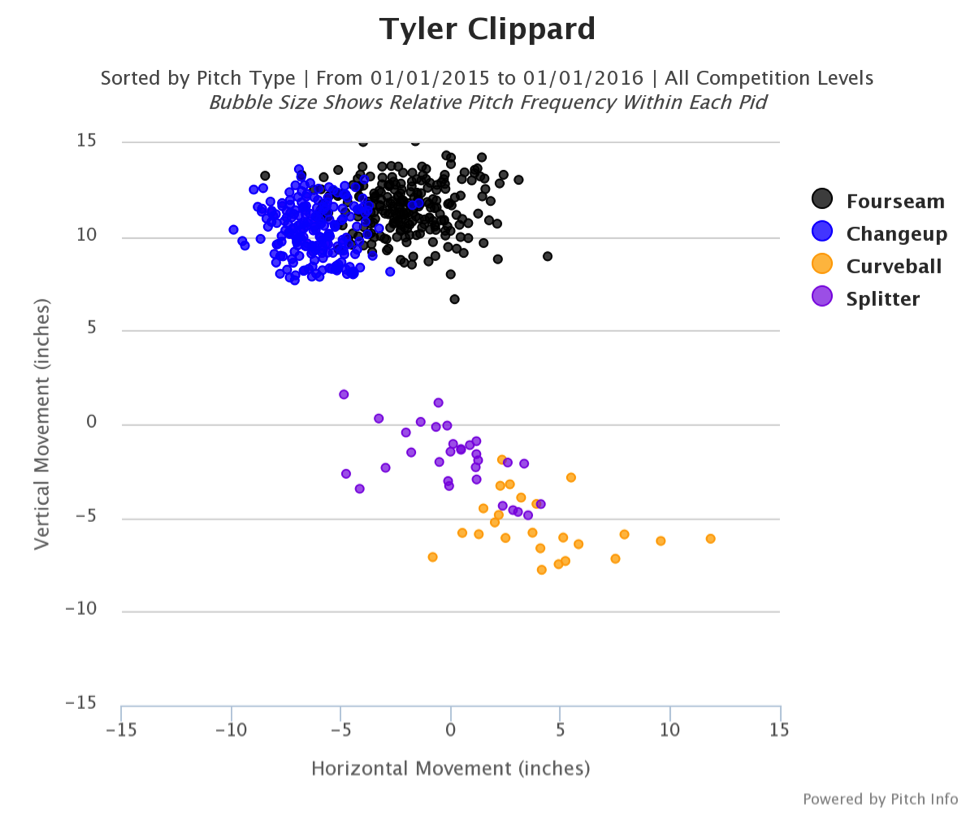 That’s about, on average, a foot of movement between his splitter and his fastball based on spin alone (i.e., even ignoring that gravity and drag will exaggerate the difference between the two). In order to create that bit of topspin, “the ball is wedged as deeply as possible between the two fingers and flipped out of the hand,” according to Fast. The wrist snaps and pronates late to ensure that the ball slowly spins forward and down (perhaps with a bit of sidespin). A slow motion capture of Clippard’s release suggests that’s exactly what he’s doing.

The ball is wedged deep in his hand, he does flip the ball out of his hand with a wrist snap, he does pronate late, the ball does wobble with slight topspin and sidespin, and it ends up diving out of the strike zone for a swinging strike three.

So is it a forkball? By the textbook definitions, it appears that way. Clippard calls it a splitter, and in most situations that’s all people really need to know. Perhaps I’ll continue thinking of it to myself as a forkball and continue calling it what Clippard does.

The most important thing for Clippard’s new pitch, regardless of the effect it has on PITCHf/x nerds, is that it’s given him the ability to attack hitters in new ways. In adding the split/fork, he dropped his early-count cutter, an unessential part of his repertoire. The splitter’s nasty diving action has made it ideal for missing bats and throwing low out of the zone when ahead 0-2 or 1-2. He told the Washington Post, “I don’t have to really locate it well for it to be an effective pitch, which is why I like it so much.”

Clippard has thrown the pitch almost exclusively in two-strike counts, and it currently boasts a .143 opponents’ slugging percentage. Simultaneously, it has let him throw more changeups in the middle of counts to keep hitters from sitting fastball—he’s thrown a changeup in even counts to right-handers 31% of the time since adopting the splitter, up from 17% of the time before. It’s also the one pitch that seems to go against his extreme fly ball tendency. He’s used it to induce 10 ground balls out of 16 balls in play.

One last noticeable effect is that it’s given Clippard a pitch he can throw to each side of the plate. Below are the zone profiles of the change on the left and the split on the right.

With its tailing action, Clippard has not used his changeup much on the first-base side of the plate. Even when he has tried to do so against right-handed hitters, the pitch tends to drift back to the middle of the plate. But now, he can throw the change on one side of the plate and the split to the other with relative ease.

You need to be logged in to comment. Login or Subscribe
kalimantan
I really like watching him pitch. So, as a guy who was a starter right through the minors, but became a reliever on his call-up, is it too late at 30 to switch back? Sounds like he has the tools at least.
Reply to kalimantan
SixToolPlayer
I think Clippard's really the epitome of a back-end bullpen guy. Huge strikeout rate balanced against higher than average walk rate. Low BABIP = fewer bloop hits that could tie a game late.
Reply to SixToolPlayer
NatsLady
What keeps Clip from being a starter isn't stuff, it's efficiency. At least when with the Nats, he tended to get in long foul-ball contests with the hitter--which he would eventually win, but they drove up his pitch count.
Reply to NatsLady
Dgalloway15
Don't forget Robert Coello as a true forkball guy
Reply to Dgalloway15
SixToolPlayer
This GIF still makes my fingers hurt: http://assets.sbnation.com/assets/2635295/angry-knuckler-4.gif
Reply to SixToolPlayer
GBSimons
I'm partial to this one: http://www.sportsgrid.com/mlb/watching-r-a-dickeys-knuckleball-in-slow-motion-proves-how-difficult-it-is-to-hit/
Reply to GBSimons