Join us for Baseball Prospectus Night at Miller Park to watch the Brewers play the Cubs on May 9th. Order Your Tickets Today.

Former NL MVP Ryan Braun struggled with nerve issues in his right thumb a season ago, an affliction that eventually expanded to his entire hand. He was unable to make contact with the baseball without instinctively letting go of the bat in pain. It led to a listless .239/.302/.421 slash line in the second half and proved to be one of the main reasons the Brewers imploded down the stretch, coughed up a comfortable division lead, and ultimately missed the playoffs.

Last year, in other words, Braun had a reason for his uncharacteristically bad performance at the plate. His thumb made it difficult to even shake hands with someone, much less play baseball against the best pitchers in the world. Stu Wallace, who now works for the Pirates organization, outlined Braun’s injury and its significance, making a convincing case that Braun’s impotence after the All-Star break could almost wholly be attributed to his injury.

A month into the 2015 campaign, however, the 31-year-old slugger is reportedly healthy yet slumping to a .230/.272/.402 slash line. To put that in perspective, his .239 TAv ranks 152nd out of 199 batters with at least 75 plate appearances this year. Signs that he’s beginning to snap out of his prolonged slump exist—he has connected with four home runs in his past six games—but it’s far from enough to alleviate the growing concern that Ryan Braun might no longer be a premier threat in the National League. At this moment, if we’re being honest, many are trying to determine if Braun is “done” in some sense of the word.

In a simplistic sense, it’s not difficult to pinpoint the cause of Braun’s struggles. The California native is swinging at an unprecedented rate, which has led to more swings at bad pitches and more swing-and-misses, more generally.

Braun battled his injured thumb in 2014, which cost him bat speed. He talked about needing to start the bat earlier to compensate. Committing to swing earlier meant less recognition time at the plate, which led to more swings at bad pitches and more whiffs. That wasn’t supposed to carry over into the 2015 season, though, once the surgery alleviated the thumb/hand ailment.

One could perhaps attribute the carryover to his needing to break bad habits that were acquired last season—that he’s still trying to cheat on the fastball and getting abused by breaking and offspeed pitches. The numbers bear that out, too. According to Brooks Baseball, he’s hitting .222 against breaking balls and .125 against offspeed offerings. His work against fastballs has been decent enough, a .267 batting average with five home runs and a .250 ISO. It’s been the non-fastballs that have given Braun fits this season.

Ultimately, I believe the non-fastball issues have stemmed from an inability to cover the inside of the plate. Opposing pitchers are busting him inside with some success, which is making him more susceptible to softer pitches out of the strike zone.

This realization that Braun could be exploited on (and just off) the inner part of the plate with the fastball began a year ago. Over the course of his career, lefties have thrown fastballs 64 percent of the time, while righties have featured fastballs a bit more at 67 percent. Last year, those numbers increased to 69 and 70 percent, respectively. Starting in July, opposing pitchers began starting him off with a fastball almost 80 percent of the time. The fear factor disappeared, as the other team fully understood Braun’s thumb kept him from handling the hard stuff.

This season, the number of fastballs seen has dropped a bit, but the philosophy hasn’t gone away. Teams are exploiting Braun on the inner third. Below is his career heat map of the percentage of whiffs by location: 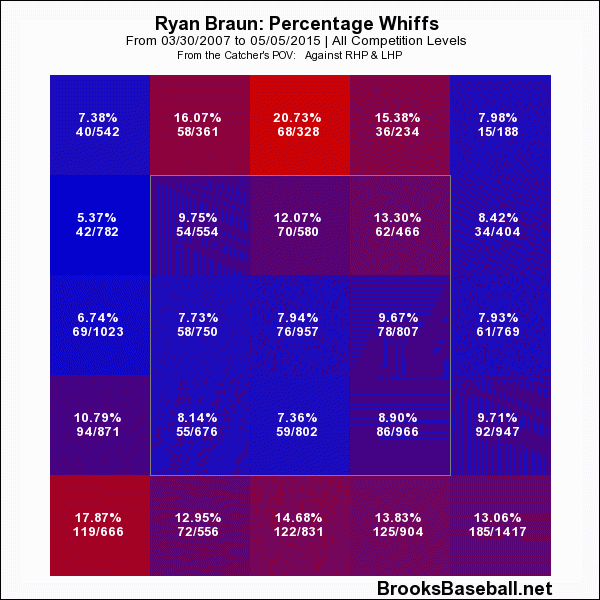 The inner portion, aside from off the plate, is sparsely attacked. Compare that heat map to the 2015 version, though, and the approach disparity is readily apparent. 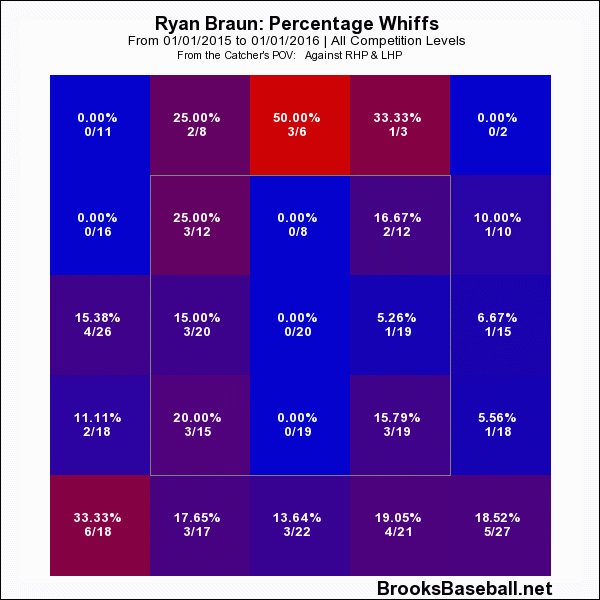 The swing-and-miss percentage from pitches on the inner third has increased dramatically. Those are similar percentages from 2014, so it seems that opposing pitchers exploited his limitations a year ago and those are carrying over into the 2015 season. Braun is surely conscious of his issues on the inner third and is perhaps continuing to cheat by starting his bat early to cover the inner portion better—which, obviously, makes him extremely susceptible to secondary pitches.

Despite all the fire and brimstone, though, significant data exists that shows Ryan Braun has hit the baseball hard this season and has seen fewer than expected balls drop in for hits. Among all players who have accumulated at least 25 at-bats measured by published Statcast data this season, Braun has the seventh-highest average batted-ball velocity at 95.16 mph. That suggests he’s barreling up the baseball quite often and simply hasn’t reaped the benefits as of yet.

This is further illustrated by his hard-hit percentage of 44.6, which is the highest of his career, by far. His career-average mark is just 36.3 percent. Lots of hard-hit baseballs, but only a .230 batting average to show for it.

As always, BABIP comes into play when discussing batting average and whether or not a hitter “deserves” that average—though perhaps the word deserves is a bit strong, hence the scare quotes. His .250 BABIP this season is the lowest mark of his career by a massive 54 points. Moreover, his career average is .335, so one would reasonably assume that his BABIP will eventually regress significantly upward, especially since the data suggests he’s hitting the baseball hard. If his BABIP jumps to .300—which would still be the lowest mark of his career—his overall batting average would be up in the .275-.280 range and his overall production would be much more palatable at the dish.

Of course, the 2015 version of Ryan Braun does appear to be different than the pre-injury Braun. Some may ascribe his struggles to a lack of performance-enhancing drugs, but the batted-ball velocity suggests the power in his swing hasn’t subsided in any meaningful manner. Instead, the 2015 Braun is different because he’s exploitable. He’s pitchable. Opposing hurlers can challenge him early with hard stuff in on the hands and then work out of the strike zone with breaking balls and changeups. It has proven effective for the past two years.

All in all, the data suggest two things: (1) Braun seems to be fighting bad habits he developed last year while dealing with a nerve injury in his thumb; (2) if he cannot close the hole in his swing on the inner third of the plate, he should still be effective and hit for power but will likely struggle reach the elite pre-injury levels of production.

It’s doubtful that decreased level of production would live up to his bloated remaining contract; however, it does seem to be premature, if not wrong, to consider Braun to be done in any meaningful sense of the word. They say baseball is a game of adjustments. Opposing pitchers have adjusted to Braun’s inability to cover the inner third of the plate. It’s on him to re-adjust and close that hole in his swing. If he does, the batted-ball data indicates he has plenty of power left in his bat to be a dangerous middle-of-the-order hitter.

You need to be logged in to comment. Login or Subscribe
jguariglia
I lost 20 pounds of muscle and my hemoglobin level has crashed, but because no one has created a steroid regression chart let's just say my drop off has something to do with a thumb, thumbnail, pinkie toe injury and move on.

When he never touches .500 slg again for a season will we finally be able to admit a lot of his power was due to his self-administration of a proven muscle enhancing supplement. Vitamin S. Or you can just dig your hole a little deeper and jam not only your head but your entire body into the sand. But maybe I'm only saying this because I'm anti-Semitic ;)
Reply to jguariglia
jimmyb1799
You seem fun.
Reply to jimmyb1799
jmoultz
/waits for proof of "muscle enhancing supplement"/
Reply to jmoultz
BPKevin
The Beef seems like Roid Rage
Reply to BPKevin
kddean
seriously, will BP ever mention anything about Roenicke's firing?
Reply to kddean
lyricalkiller
The Transaction Analysis is up now, as a matter of fact. Enjoy!
Reply to lyricalkiller
lichtman
When looking at a player who is 31 (or any age for that matter) over several years, you really need to compare him to the average player over that time period. Batters typically get a low worse in their early 30's from normal aging. I would assume that is a big part of Braun's decline.
Reply to lichtman
Tom9418
I will say that BP's stance on "PED's don't make you better" is very frustrating, probably the biggest credibility drain on an organization I view as overall pretty credible.
Reply to Tom9418
therealn0d
Given how much turnover there has been, top to bottom, I would find it hard to characterize BP as having an organizational stance on PEDs. It's a pretty widespread stance throughout the sabermetric community that it just isn't knowable how much PEDs affect performance. It's not a denial outright, it's just that...what do you want? How much of a debit should be applied to known PED users? If you really want to read hot-take hyperbole about the issue, there are many, many sources for that kind of stuff. Here we just basically go for baseball analysis that makes as much sense as it can. It would be every bit the turnoff for me if every other article had to mention PEDs. What do you want us to do about it? Maybe someone should start their own website...BPeds
Reply to therealn0d
username49
From what I understand, not only do PED's enhance power, but they enhance reaction time and focus as well. I think most people assume that steroids help increase bat speed, thus making it easier for players to react to pitches, but I have heard players comment on how that is not necessarily the case. Steroids get you high and in the zone, just like adderall, and most players would say that its the focus factor that is the source of the improved performance.

Point is, I really don't think we should judge ex steroids guys by their power output, but more on their overall production.
Reply to username49
therealn0d
This is all anecdotal and speculative. How do you know what most players would say?
Reply to therealn0d
Dodger300
Username49, can you produce even a shred of objective evidence to back up anything you wrote?
Reply to Dodger300
jguariglia
You know absolutely nothing about steroids. There is no stimulating effect at all. Do a little research or maybe go to a real gym and talk to people who have some actual experience with these chemicals. Your spreading as much BS on the subject as the media is.
Reply to jguariglia