The Monday Takeaway
It’s tough to imagine that Craig Counsell could have asked for a more unfavorable matchup in his managerial debut. Granted, the Brewers were coming off consecutive wins for the first time all season, but the club has been terrible in 2015 and had a date with Clayton Kershaw on Monday.

It took just three pitches for the Brewers to find themselves in an early hole. Joc Pederson, who has been swinging a hot bat of late, put a charge into a belt-high fastball from Kyle Lohse to spot Kershaw an early 1-0 lead.

Kershaw was dealing from the get-go, striking out the side in the first inning with six swinging strikes, as the elite slider that we’ve come to expect from the southpaw was working especially well.

He struck out Aramis Ramirez to start off the second inning and then coaxed the next eight outs on groundballs. The only thing keeping Kershaw from a perfect game through five innings was a single to center by Kyle Lohse in the third inning. Go figure.

The Dodgers added a pair of runs in the fourth inning but unpredictability reared its head again in the sixth, with Hector Gomez and pinch-hitter Gerardo Parra ripping back-to-back triples off the reigning MVP to get the Brewers on the board. A baserunning mistake by Parra limited the Brewers to just one run in the inning and Kershaw continued to cruise along through seven innings. Along the way he got some assistance from Jimmy Rollins

But after retiring the leadoff man in the eighth inning, Kershaw started getting into trouble. First, Gomez, a 27-year-old infielder out of the Dominican Republic, turned on a fastball middle-in for his first career home run. In the process he became the first player to ever hit a triple and home run in the same game off the Dodgers ace.

Then Kershaw got the hook after Adam Lind scorched a double to right field. In came Chris Hatcher and out went the lead, as Carlos Gomez ripped a double that split the outfielders in left center to tie the game. The veteran Gomez would advance to third on a ground out and then came across to score the go ahead run on an infield single that Ryan Braun beat out by half a step. Francisco Rodriguez sent the Dodgers down in order in the ninth to secure Counsell’s first managerial win and the third straight win for the Brew Crew.

Quick Hits from Monday
Washington’s defense continued to look shaky on Monday against the Marlins but those miscues became afterthoughts after a late offensive outburst propelled them to a win over the Marlins.

Things got off to a rough start for Jordan Zimmermann, as the Marlins were making loud contact against the right-hander in the first inning. One of those lasers came off the bat of Giancarlo Stanton, but the exit velocity was no excuse for Jayson Werth’s error.

That led to an unearned run in the first but Zimmermann settled in after that, not allowing another run to score until the seventh inning. The right-hander scattered six hits over his seven innings of work, striking out four and issuing no walks. Blake Treinan took over with the game tied 2-2 in the eighth and made the cardinal sin of issuing a leadoff walk to speedster Dee Gordon. Treinan proceeded to strike out Martin Prado but Gordon was able to swipe second base on a delayed steal.

Danny Espinosa was late covering the bag and the ensuing collision between him and Gordon resulted in the potential go-ahead run in scoring position. After an intentional walk to Giancarlo Stanton, Treinan allowed a single to right field off the bat of Marcel Ozuna. Bryce Harper came up firing and made a nearly perfect throw to the plate, only to watch Wilson Ramos fail to corral the ball and allow Gordon to score.

The Marlins added another run in the inning when Danny Espinosa booted a potential inning-ending force out. That left Miami’s Bryan Morris with a two-run lead to protect. The trend of leadoff walks continued with the right-hander giving up a free pass to Ryan Zimmerman. Two batters later, Ian Desmond made him pay for a hanging slider.

Morris struck out Espinosa but Tyler Moore and Denard Span each added base knocks to set up runners at second and third for Yunel Escobar, who to that point in the game was already 4-for-4. The Nationals third baseman capped off what he deemed the best game of his career with his fifth hit of the night to put the home squad up by two.

With Drew Storen unavailable after pitching in three of the previous four days, Tanner Roark came in to get the save. The former starting pitcher got himself into a predicament when Dee Gordon’s single ensured that Giancarlo Stanton would come to bat as the potential tying run. With two outs, Roark gave Stanton nothing good to hit on the first three pitches and fell behind 3-0. Stanton left the bat on his shoulders on a get-me-over fastball from Roark for strike one but then proceeded to whiff on consecutive sliders out of the zone to end the game.

After combining to pitch 15 1/3 innings over the course of three extra-inning affairs against the Pirates this past weekend, the Cardinals bullpen would really have appreciated Monday’s starter, Carlos Martinez, to eat some innings against the Cubs. Instead, the young hurler ran into some serious command issues out of the gate, walking three of the first four batters of the game. The Cubs then strung together four consecutive singles, the final blow dealt by the opposing pitcher, Travis Wood, to put the finishing touches on a five-run inning.

Martinez was all over the place and struggled to get ahead in the count (12 of 23 first-pitch strikes), ultimately getting tagged for seven runs on nine hits and four walks. He departed after 3 2/3 innings and 102 pitches. 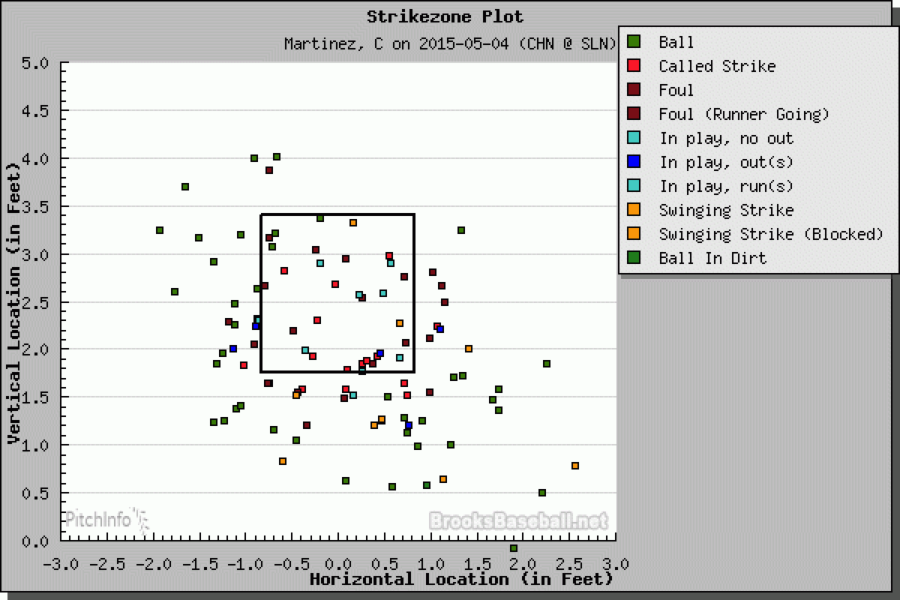 But despite Martinez’s atrocious outing, the Cardinals still found themselves in the game. After Chicago jumped all over Martinez in the first, Mark Reynolds got the Redbirds right back into the game in the bottom of the inning with a grand slam into the visitors’ bullpen.

By the time the seventh-inning stretch rolled around, both starters were long gone and the Cubs held an 8-6 lead. Chicago called on Pedro Strop but the normally reliable set-up man allowed three baserunners to reach without recording an out., handing the ball off to left-hander Zac Rosscup with the bases juiced. Rosscup got Jason Heyward to bounce into a force out that plated a run but Kolten Wong proceeded to tie the game with a bloop single to center. Up next was Tony Cruz, who hit a bouncer past a diving Bryant to give St. Louis a 10-8 lead. Addison Russell would launch a solo blast in the top of the ninth but it proved to be too little too late for the visitors.

Carlos Villanueva, Miguel Socolovich, Matt Belisle and Seth Maness combined to toss 5 1/3 innings in relief of Martinez and help the Cardinals pick up their seventh straight win and improve to a franchise-best 19-6 start.

The Padres have become all-too-familiar with being no-hit by Giants starting pitching in recent years, with Tim Lincecum no-hitting the Friars in each of the past two seasons and Jonathan Sanchez making history against them back in 2009. Madison Bumgarner flirted with a no-no against San Diego late Monday night but a soft Justin Upton single to lead off the seventh inning ultimately broke up the bid.

The Giants ace pitched brilliantly against the Padres, effectively changing eye levels and generating 18 total swing and misses throughout the night—seven with his fastball, seven with his cutter and four more with his curve. 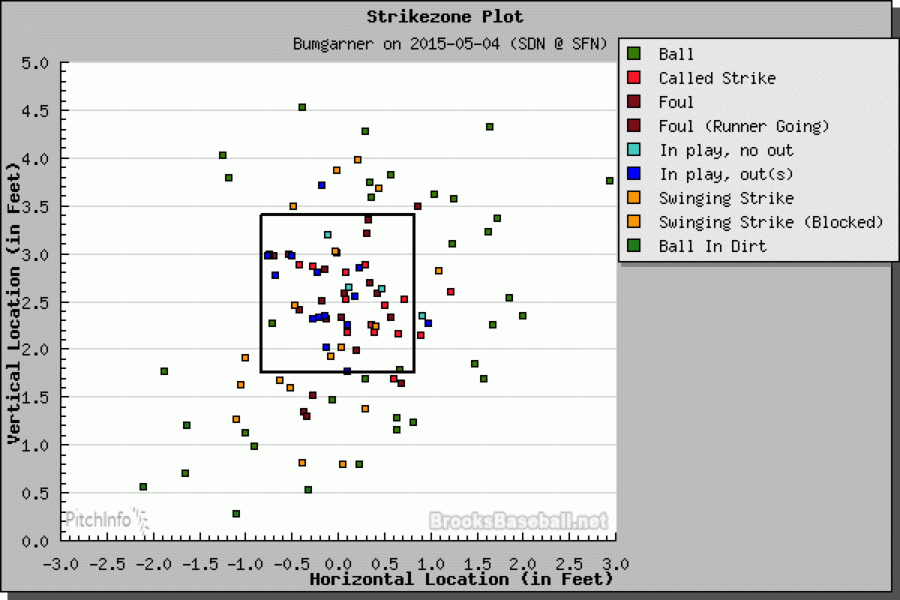 Yangervis Solarte added a single immediately following Upton’s but Bumgarner was able to escape the seventh inning without any further damage. The two runs that the Giants were able to plate in the third inning against Tyson Ross turned out to be all the offense necessary. Bumgarner departed after fanning Austin Hedges in the top prospect’s first major-league plate appearance and Sergio Romo and Santiago Casilla combined to blank the Padres offense the rest of the way.

The Defensive Play(s) of the Day

Dallas Keuchel turned in another excellent performance for the Astros on Monday, striking out eight and scattering five hits across eight innings of one-run ball against the Rangers. Jose Altuve and George Springer pitched in with a pair of outstanding defensive plays behind the left-hander.

However, Keuchel didn’t get the same help in the form of run support, as the Astros were unable to solve Ross Detwiler. The Rangers pushed across a run in both the eighth and ninth innings and held on to snap Houston’s 10-game winning streak.

—In what has been a disappointing start to the season for the Indians, Danny Salazar has been one of the few bright spots on the team so far. In three starts since being recalled from Triple-A, Salazar has posted a 28:5 strikeout-to-walk rate across 19 innings while giving up just seven total runs. He’s also added a curveball to his repertoire, which also consists of his mid-90s fastballs, a devastating splitter and a slider. In his most recent start against the Kansas City, Salazar went to the pitch 14 times, which was a noticeable increase from his usage in his previous two starts, so it appears that it may be a pitch he plans on making a bigger part of his pitch mix going forward. Keep an eye on how he uses the pitch in Tuesday’s rematch against the Royals, who will counter with Jason Vargas (8:10 p.m. EST).

—After getting off to a hot start to the season, Shane Greene has been in complete free fall , getting mauled for 15 total runs during his last two starts against the Indians and Twins. In his latest outing, Greene fell victim to the long ball, with Oswlado Arcia and Trevor Plouffe each going yard against the right-hander before his eventual exit before the end of the fifth inning. Greene will look to get back on track against the White Sox and Jeff Samardzija, who is coming off a rough eight-run outing of his own against the Orioles (8:10 p.m. EST).

You need to be logged in to comment. Login or Subscribe
MrPizzacoli
"Then Kershaw got the hook from Don Mattingly after Adam Lind scorched a double to right field."

Great article, and I hate to be "that guy", but Mattingly was ejected in the third inning for arguing a balk that was called on Kershaw by first-base umpire Paul Emmel .
Reply to MrPizzacoli
cmosch
You're definitely right! Kershaw was not a happy camper after that call either. Should be fixed shortly. Thanks for reading!
Reply to cmosch
newsense
"Greene will look to get back on track against the White Sox, who is coming off a rough eight-run outing of his own against the Orioles"

the White Sox and who???
Reply to newsense
cmosch
Ahh, that should be Jeff Samardzija. Should be fixed shortly.
Reply to cmosch
kddean
I don't understand why there's been nothing about Roenicke being fired on BP.
Reply to kddean