A few years ago, Jeff Zimmerman published a study he had done, in which he found that the typical aging curve for hitters was changing. To be specific, hitters had more or less stopped improving. Instead of entering the league with their physical gifts outpacing their skills, improving throughout their 20s, and declining as they reached and surpassed 30 years of age, batters were having their best seasons between ages 20 and 25, and then began declining immediately.

I’m not aware of a significant update to that work, nor of any corroboration of its findings. Assuming it's a real change, though, it’s a sort of sad development. One of the joys of baseball is its difficulty. Succeeding in this game is supposed to be hard, gut-wrenchingly hard. It’s supposed to take years to master the craft. Even in a league where BABIP drives offense more than ever, and where athleticism is therefore more important than ever, it’s fair to hope for some sign that batters can gain something significant from their years of professional experience. We should want exciting baseball, but we should also admire most those whose success is hardest-won, and if it’s true that the balance of power tilting toward pitching has robbed batters of their ability to grow and evolve, that’s a shame.

Happily, there’s still some sign that developing into a star can be an excruciating, years-long process, yet ultimately, a fruitful one. Players like Michael Brantley and Yadier Molina remind us that not all superstars are superstars right away, and that taking one’s lumps in the majors still has developmental value. There’s another example, too, a player who survived cancer as a teenager; rose rapidly through the minors, but hit a brick wall in his first exposure to the big leagues; and was on his third organization and his third full MLB season before finding gear and taking off. I wrote all of this with the air of secrecy, but the guy’s name is probably in the headline: I’m talking about Anthony Rizzo. It’s the eighth year of Rizzo’s professional career, now, and his fifth in MLB. Last season was his breakout, but this season looks like it could be transcendent.

Rizzo was a well-liked prospect. The Red Sox took him in the sixth round in 2007, but they paid him $325,000, which was third-round money at the time. He was a top-100 prospect prior to 2011, according to each of the major ranking services. Traded to San Diego that winter, he debuted the following summer, but things went miserably. In 153 plate appearances, he hit .141/.281/.242. Since 2000, 106 players have amassed 150 or more plate appearances while playing primarily first base, a corner outfield spot or DH in their first MLB season. Rizzo’s 51 OPS+ was the worst of them all.

When something goes so wrong for a promising young player, people look for explanations. Discouragingly, a fairly intuitive and easy one cropped up right away: Rizzo couldn’t handle good velocity. R.J. Anderson explored the concept for us, and found that, yes, Rizzo was struggling to catch up on heaters over 90 miles per hour. With a hideous stat line and a scouting note that gave everyone just enough cover to ease off the gas, Rizzo became slightly damaged goods. An off-season trade to the Cubs allowed him to put some of that in the past. A solid half-season with his new team took him into 2013 with a secure starting job, and even a rocky full season didn’t totally chase away optimists this time. As I wrote then, Rizzo appeared to do everything the way many of the league’s elite mashers did—except hit for average, particularly because of a bad BABIP. He was a chameleon, too, always tinkering with his stance, his swing path, his position in the batter’s box, his approach. That felt like a good thing—young hitters should be open to adjustments, and eager to make them until something works—but it also seemed to be slowing his development. He was just taking too many false starts, not giving himself time to blossom.

Then, 2014 happened. Paul Goldschmidt was probably the best first baseman in the National League last season, on a rate basis, but Goldschmidt missed enough time that we can comfortably call Rizzo the most valuable player in his league at his position, at age 24. Rizzo finally found a stance and swing that worked for him, and tapped into the power (literally) of his natural talent. He not only reached inside pitches, but massacred them. He launched 32 home runs, despite missing three weeks with a tight lower back.

That, apparently, was all pitchers needed to see, which brings us to the reason I started writing this article. By the early indicators that are our plate-discipline metrics, Rizzo is perhaps the most feared hitter in baseball, and while he hasn’t hit a whole bunch of home runs yet, he’s looking like the most dangerous one, too.

What makes for a low Zone Rate? There are probably a lot of factors, including varying levels of opponent quality, especially in a 20-game sample, but the three big drivers are:

We talked above about how Rizzo came to be feared. Even in the cold weather the Cubs have encountered for most of the season, Rizzo is a threat to go deep, or at least put one in the gap, whenever there’s a bat in his hands. He’s earned pitchers’ avoidance, just as Gattis and Trout and Jones have.

To my great chagrin, Rizzo has batted third in 13 of the Cubs’ first 20 games, which has led to too many plate appearances with two outs. In 32 such trips to the plate, Rizzo has been hit or walked 10 times. There’s some situational element to this, too, then, though it’s likely minor.

Things get really interesting, though, when we dig into chase rate. Here are the same 20 batters I showed you above, the hitters pitchers most stubbornly refuse to challenge, only this time, with their percentage of swings on pitches outside the zone in place of their zone rate.

Only two players in this pool spit on pitches outside the zone more reliably than Rizzo: David Ortiz, and Rizzo’s teammate, Dexter Fowler. Both guys have gotten at least 41.7 percent of their pitches inside the zone, considerably higher than Rizzo’s rate. 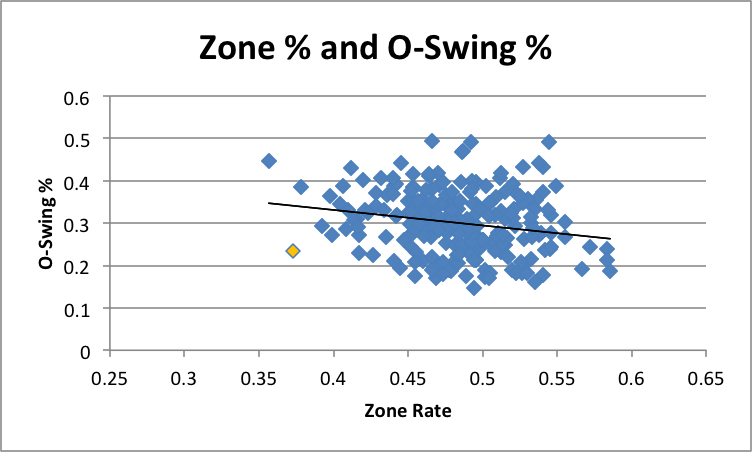 As I’m sure you can guess, Rizzo is the gold marker. No one comes close to him, in terms of staying patient in the face of a steady diet of junk. Indeed, it seems hard to believe that any hitter can remain as disciplined as Rizzo has been. In general, when hitters and pitchers reach this sort of impasse, a compromise is found. Pitchers give in ever-so-slightly more often, while the batter finds a particular out-of-zone pitch he can often drive and begins swinging at it more consistently. Rizzo did that last season, with pitches in an off the plate. Thus far in 2015, he’s stacking himself even closer to that inside corner, and declining to work with his opponents. That’s leading to a lot of walks and times hit by pitch.

This augurs well for Rizzo: it’s certainly a good idea not to get antsy simply because pitchers won’t throw you a strike. Just as grabbing, though, is another facet of Rizzo’s impressive start: he’s not swinging and missing.

Rizzo was never a particularly strikeout-prone guy, especially for a slugger. He kept his strikeout rate below the league average even during that rough season in 2013. He’s short to the ball, especially now. Even so, the frequency with which he connects is stunning, given that so many of the pitches he sees are unfit for most to hit. 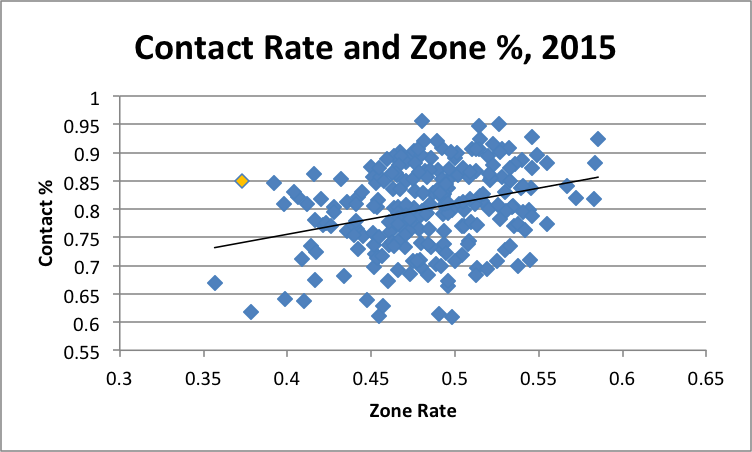 As ever, Rizzo is tracing a unique path. He’s improving at a remarkable rate, and even if there’s a new set of adjustments coming soon (there is one; there has to be), he seems to be a half-step ahead of them. Even statistics this closely tied to conscious decisions are vulnerable to variance in small samples like these, and the interactive forces of game theory are going to pull Rizzo back toward the pack in these regards. He might even elect to start trading some contact (or some walks) for long hits as the weather warms and the ball begins to fly better. In the meantime, though, Rizzo is reaching base nearly half the time. He’s proved he can thrive (and then some) under the current conditions, so pitchers will have to start adjusting to him soon.

You need to be logged in to comment. Login or Subscribe
onegameref
With Bryant behind him he should maintain his stubborn approach and continue his high OBP ways for years to come. The Cubs team OBP is 3rd yet AVG and runs not so high. I suspect it will come as long as they remain patient. The other team in town could take a lesson or two from the Cubs on how to address lack of runs.
Reply to onegameref
anderson721
So who is that Anti-Rizzo is the first graph?
Reply to anderson721
matrueblood
The inveterate chaser who sees no strikes is Evan Gattis. The free swinger no one fears in the top right corner is Danny Santana.
Reply to matrueblood
crazy114
If BABIB drives offense more then ever why does that make athleticism more important?
Reply to crazy114
matrueblood
Because in turn, BABIP is driven by athleticism. Speed. Strength. Hand-eye coordination. Many good BABIP guys have raw approaches and flawed swings. They make up for it with those things.
Reply to matrueblood
jfranco77
I'd be curious to know how far away from Rizzo you would find Joey Votto
Reply to jfranco77
matrueblood
Votto is, of course, very patient in his own right, but pitchers have attacked him pretty aggressively to date. He has almost a dead-average zone rate. We'll see if a stretch of good health and consistent power output puts the fear back in them.
Reply to matrueblood
ADprospectus
Enjoyed reading this, particularly after seeing some of Rizzo's personality on Garbage Time last week.

https://www.youtube.com/watch?v=nJhhPSHjlCo
Reply to ADprospectus
therealn0d
I remember that Zimmerman piece, and it had some problems with survival bias. I no longer have the code or the file, but I ran the numbers selecting for players that lasted at least 10 big league seasons and found nothing substantially different about player aging. It seems likely that there is a pretty good sized crowd of 23-25 year olds that get their shot and flame out before there is any aging curve for them to have.
Reply to therealn0d