A couple of days ago, our friend Rob Neyer asked an interesting question over at Just A Bit Outside. The Kansas City Royals had started out the 2015 season with seven consecutive wins. I guess maybe that whole “Defending American League Champion” thing actually means something. Despite having come oh so close in the 2014 World Series, not many really fancied the Royals as contenders this year. Should the Royals’ seven-game perfect start change our expectations of them?

Rob quoted BP alumnus Joe Sheehan, who pointed out that last year there were 11 teams who had seven-game winning streaks and only four made the postseason. The Royals winning their first seven makes for a nice story at the beginning of the year, and certainly it’s a positive thing for the Royals, but it tells us no more than a seven-game winning streak in mid-June would tell us. Later on the JABO podcast, former pitcher (and JABO contributor) C.J. Nitkowski said that he could see a case for a streak to start the season being somewhat more valuable. It gives the players confidence going forward, he suggested.

Rob left it with the question of whether either one of them was right, “Mathematically speaking, I mean.”

Now, of course, there’s going to be some inter-correlation there. The Royals, even if they lose every game for the rest of the year, are guaranteed a 7-155 record. But, since the span of games in each instance is seven wide, no individual bucket of games has an unfair advantage.

The correlations ranged from .455 at the high end (games 141-147) to .272 at the low end (games 38-44). So, seven games isn’t a fantastic predictor of anything, but some interesting patterns emerged. Take a look at this graph. Moving from left to right, we have rolling seven game blocks (games 1-7, 2-8, 3-9…) and on the y-axis, we have the correlation coefficient for that set of games. 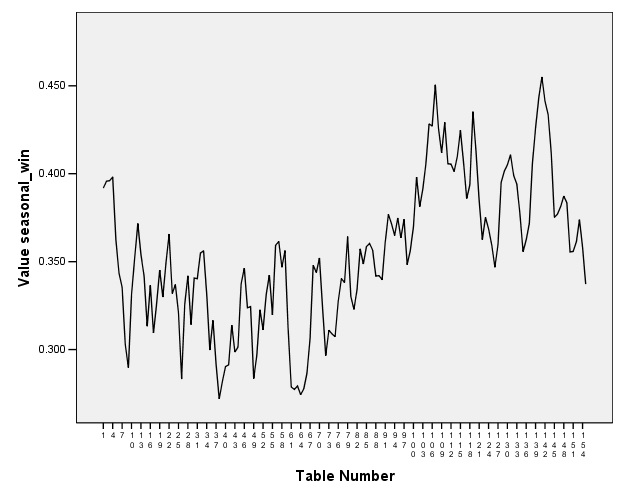 We see that, in general, the graph starts out early in the season at a correlation of .40, but then the trend line points downward, bottoming out around games 64-70. But then something happens. As June turns into July and July into August, those seven game stretches are actually better correlated with the end-of-season, with a peak around games 107-113. There’s a tiny valley downward, and then a rebound around games 141-147.

So, are the first seven games a particularly significant predictor of what’s to come? Well, mathematically speaking, the first few games do seem to have some special magic compared to the rest of April and May. But if you really want to see what a team is made of, wait until you see what they do around Game 100… roughly the trading deadline. Maybe that’s a matter of teams showing their true colors in the dog days of summer. Maybe it’s the fact that around then, the good teams have added extra pieces and the bad teams have jettisoned those pieces. But there’s something about that point. Around Game 144 takes us into the last couple weeks of the season. Official pennant race season.

So, yeah, a hot seven-game start is good and it does mean a little more than a hot seven-game stretch in late May, inasmuch as a seven-game sample can tell you something interesting about a team. But if you really want to know a team’s true colors, look at what it does when the weather turns a bit hotter. Then again, maybe we’re reading too much into a correlation of .40, which means that there’s a lot of room for error. It is only seven games out of a very long season after all.

You need to be logged in to comment. Login or Subscribe
brentdaily
Game 144-ish would be around the time rosters expand, correct? The same caveat you mention about the trade deadline may apply to September roster construction.

Wild-Assed Thought:
I wonder if changes to the roster spark a newness or social equity factor where the new guys bust their ass to become socially accepted. Teams in contention get a 'shot in the arm' (ugh) at just the right time (i.e. dog days) and it elevates everyone's focus, hustle, etc.
Reply to brentdaily
Michael
Winning the first seven games should be more significant than winning seven consecutive games at some random point in the season because the starting point is fixed. Later in the season, the game before a seven game win streak will be a loss, so almost by definition it's really winning 7 out of 8.

Sorry if that's being too picky.

There were a lot of posts about the signature significance of a season-beginning win streak when the Royals unexpectedly started 2003 with a winning streak.
Reply to Michael
pizzacutter
The point isn't that it's more/less likely that the Royals would run off a 7-game streak to open the season vs. a 7-game streak at any time. By definition, it's much more impressive to do something you only get one shot to do vs. something you get 156 shots to do.

The question that Rob, Joe, and CJ were rolling around was whether the fact that they won the first seven games had any special predictive power for their season chances over and above the fact that they won 7 games. Is the fact that it's games 1-7 special vs. a streak from games 65-71? The answer says that there's something to the fact that they opened the season that way, although there are other periods of the baseball season which are more predictive.
Reply to pizzacutter
DetroitDale
Every time I hear talk of winning streaks I remember a Brewers team in the late 80's that started the year winning 15 in a row, then losing their next 13. I don't think that team made the playoffs (but there were no wild cards back then and only two divisions per League)

Reply to DetroitDale
markpadden
Wait, what? First of all, that's incredibly noisy data. Starting the season 7-0 might have a tiny, tiny bit more predictive value than going from 2-2 to 9-2, but that's not even worth noting.

The real problem with this article:
"But if you really want to know a teamâ€™s true colors, look at what it does when the weather turns a bit hotter."

*Of course* a 7-0 streak is going to correlate higher with season win pct. the later in the season it occurs. Is this not obvious? [And the dropoff in Sept. is due to roster expansion]. Teams that are 80-50 are a hell of a lot more likely to run off seven wins in a row than teams that are 50-80. The 7-0 run is not the cause or predictor of the great season record in this case; it's simply a symptom of being a great team over a large sample of games.

How was this article even published?