The other day a reader posted a question in Sam’s chat about an interesting observation the reader had made:

The idea that relievers get a free pass around giving up free passes is an interesting one. What’s even more confounding is why the relievers themselves would be so willing to give up free bases to opposing hitters. There are, of course, many factors (a few of which Sam got into in his response):

1. The true-talent level for relievers is lower with regards to command, meaning that a BB/9 of 3.5 might be bad for a starter, but decent for a reliever.

2. Fewer walks given up by relievers end up scoring and so relievers aren’t penalized the same way a starter is for giving up a free pass.

Let’s unpack each of these to see what holds water and what doesn’t. The most logical place to start is to determine if our expectations match reality. We’ll use a five-season timeframe for this study (2010-2014) and standard qualification benchmarks. That means we have 442 starting pitcher seasons and 681 reliever seasons to consider.

Over those five seasons relievers walked half a batter more over nine innings than their starting counterparts. While starters averaged a walk rate of 2.7, relievers walked a hitter every third inning en route to posting a 3.2 walk rate. There’s also more volatility within the reliever subset, with the standard deviation for relievers being 1.09, compared to starters who had a standard deviation of just 0.74.

If we revisit the hypothetical in our initial explanations above, we can see that a BB/9 of 3.5 would be pretty bad for a starter (1.1 standard deviations above the mean) but acceptable for a reliever (0.3 standard deviations above the mean). None of this, of course, should be a surprise. Most successful relievers were starters at one time or another. They inevitably find their way to the ‘pen for a multitude of reasons, be it lacking a third pitch, poor command, lack of stamina, or some other issue that prevents them from being a major-league starter. So reality matches our expectations: relievers have worse command and walk more batters. What goes into this being a reality though? That’s much more complicated.

I used to stand out in the backyard with my dad playing Wiffle ball when I was a kid. I’d stand on the “mound” and announce the situation:

“Bottom of the ninth. Two outs. Bases loaded. The home team is down by one run. Rob Long steps up to the plate to face Jeff Long. Only one will leave a hero”.

I’d lob pitches in, my dad purposefully swinging through hanging curveballs so that I could celebrate the monumental strikeout that sealed the game. I was Carlos Marmol. Stuck in a horrible jam, with the game on the line, I came through and struck out the last batter to save the game. There’s something romantic about finding yourself in a tough spot, and being able to fight your way out of it. That was Carlos Marmol.

There are precious few pitchers who serve as perfect a metaphor for relief pitching in general as Carlos Marmol. Marmol was, in many ways, truly spectacular. He was also very very bad at not walking batters. There were games where Marmol would take the mound and simply dominate major-league hitters with Frisbee sliders. There were times like this one where Marmol was electrifying:

Often Marmol would miss his target by several feet. His stuff was so dominant, though, that it just didn’t matter. It didn’t matter, until it did. Sometimes it mattered a lot:

Carlos Marmol walked a lot of batters. Over the course of his career Marmol walked 6.2 batters per nine innings, a remarkable number considering how successful he was despite it. For a short time we ignored Marmol’s inability to find the strike zone with any real consistency. He is the perfect poster child for this research.

Sam’s first reaction was that perhaps relievers are simply penalized less than starters for allowing walks. This makes intuitive sense. Relievers get more strikeouts than starters so maybe they’re just more adept at working their way out of trouble. Fewer of those walks are cashed in for runs, so relievers haven’t had to adapt and walk fewer batters.

To test this hypothesis, we pulled data on how frequently walked batters scored in each of the 24 base-out states. We could then split out relievers and starters to identify whether one group was penalized less for walking a batter than the other. I chose to exclude intentional walks because they are a different animal altogether and the sample size for relievers was too small to be insightful. When it came to unintentional walks though, there was little differentiation between starters and relievers:

With nobody out there was almost no difference between the two groups of pitchers. Walked hitters scored roughly 35 percent of the time regardless of who was issuing the walk. Once there was an out or two relievers were marginally less likely to let that walked batter score. Still, the differences here are less than half a percentage point, so let's ignore them. Where things do begin to differ a bit is when we look at the base-out states in greater detail: 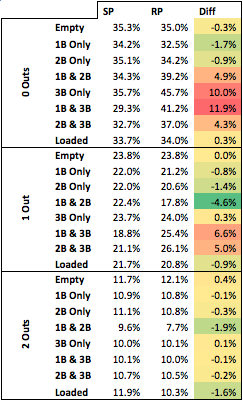 Each out state has all of the seven possible base stats listed individually under each, with the frequency of walked batters scoring for starters and relievers. For most situations, like any base state with two outs, the difference is negligible. There are a handful of specific scenarios where relievers are a lot more likely to allow a walked batter to score, but those seem to be more like interesting outliers than something that is particularly telling or predictive.

So is this a possible explanation for why little is made of relievers and their high walk rates? The data doesn’t seem to suggest that it is, so there must be some other cause of this separation.

Another possible explanation is the psychological effect that a walk has on a pitcher, beyond just allowing a baserunner. There’s a distinct difference between what is expected from starters and relievers, something that no doubt plays into a pitcher’s decision about how much to challenge a hitter on a 3-1 count. The most straightforward incentive relating to walks is that by avoiding them a starter can keep his pitch count down and stay in the game longer. Plate appearances ending in a walk take more pitches and drive up pitch counts; so too do plate appearances that go to three balls, or two balls. Relievers don’t worry about pitch counts nearly as much because they are typically only asked to throw one inning in a given outing.

There’s another, more subtle component to this. If a batter is walked in his first plate appearance against a pitcher then he’s going to have seen at least four pitches. With each pitch the batter is getting more information that will theoretically help him later in the game. As a result, starting pitchers, who will face the same batter multiple times, are incentivized to minimize the number of pitches to each batter. In theory, this would also result in fewer walks, and more pitching to contact.

There’s also some survivorship bias at play here, for the same reasons mentioned above. Command, like stamina, and ability to get out hitters from both sides of the plate, is one of the great filters among pitchers in baseball. That is, guys who can’t minimize walks don’t have long futures in front of them as starters. It’s not that we allow relievers to walk more batters, it’s that guys who couldn’t minimize walks and keep their pitch counts down ended up being moved by their clubs into the bullpen.

There’s no doubt that there are a lot of factors at play when it comes to reliever walk rates. Their talent level appears to be inherently lower with regards to issuing walks. They don’t have quite the same aversion to walking batters on account of their pitch counts either. Relievers can still be really successful while issuing a lot of walks. Until they aren’t.

Carlos Marmol came up through the Cubs system as a starting pitcher. He played in 88 games before being called up the Cubs and was the starting pitcher in 77 of them. The Cubs knew that him walking four batters a game wasn’t sustainable though, so after 13 poor starts in 2006 they moved him to the bullpen where he would excel. Marmol was often among league leaders in key stats like K/9, HR/9, and BABIP. His career numbers of 11.6 K/9, 0.76 HR/9, and .262 BABIP are all impressive, even for a relief pitcher. Over his career opposing hitters batted just .188 against him, the second-best mark in history. He was dominant.

Marmol also walked 6.2 batters per nine innings over his career. Marmol was a great success story as a relief pitcher. If he had never moved down the pitching ladder from starter to reliever, Marmol likely would have been out of baseball long before he could dazzle us with dominant seasons and an enviable slider. The great pitching filter of command claimed a victim in Marmol, but his career benefitted as a result.

Eventually Marmol’s run of dominance faded and his command problems were exacerbated by diminishing stuff. An 8.10 ERA for the Marlins last season and a release after leaving the Reds without permission likely spells the end of Marmol’s career. Marmol was great, until he wasn’t. Such is the life of a relief pitcher.

You need to be logged in to comment. Login or Subscribe
BurrRutledge
My first takeaway here is, "How the heck do you hang a wiffle ball curve?"
Reply to BurrRutledge
carltondavis
Thought sam implied the same pitcher with grade 40 command theoretically walks fewer batters per nine in a relief role.

For example, Betances would walk 3 per nine as a reliever and 4.5 per nine as a starter.
Reply to carltondavis
MylesHandley
Adron Chambers scored on Marmol's wild pitch, and is now trying to make the Cubs as a 5th OF in training camp. Small world.
Reply to MylesHandley
BrettLarter
Fun combination of a real baseball player's story told alongside analysis and data. Great article.
Reply to BrettLarter
Behemoth
Is the key number not how many baserunners are given up - 7H/9 + 4BB/9 is pretty much equal to 9H/9 and 2BB/9. If anything you'd prefer to give up the walks because they're less damaging than hits. So the simple answer is that relievers can get away with walking more because they can sustainably give up fewer hits than starters.
Reply to Behemoth
jclarkin316
Well would you look at that. Thanks, Jeff! Great article.
Reply to jclarkin316
BSLJeffLong
No. Thank YOU for the great question!
Reply to BSLJeffLong
50cubs
Marmol was a great pitchers as long as he had a 95 mph fast ball that he could get over the plate. With a fast ball like that, you couldn't lay off the slider. His slider had a wicked twist to it that made it almost impossible to hit, but it was almost never a strike. Once his fast ball began to decline to a hittable range, hitters could disregard the slider. As he started to give up hits on his fast ball, he lost confidence in it, and threw the slider too much, making it easier to recognize, and the walks went up. Then, he'd have to come in for the fast ball, and the hitter was ready for it. Exit Marmol.
Reply to 50cubs