Every day until Opening Day, Baseball Prospectus authors will preview two teams—one from the AL, one from the NL—identifying strategies those teams employ to gain an advantage. Today: unsolvable-yet-succeeding Oakland Athletics and the solvable-yet-losing Colorado Rockies.

As we all know, the Rockies face unique challenges as an organization, stemming from the unusual atmospheric conditions they play in. The answers aren’t as simple as buying big-name pitchers off the free agent market. The Darryl Kile and Mike Hampton experiments failed terribly. No, the Rockies have had to be a little more creative.

Taking a cue from the fine work of Alan Nathan, I was curious if there were any “secrets” to pitching in Coors. In a piece I wrote for Baseball Prospectus two years ago, I discovered that curveballs suffered disproportionately negative effects in Coors Field. They lost break and were hit harder than other pitches. Sliders, comparatively speaking, were a much better option. Following the article, Jhoulys Chacin confirmed in an interview that he had the most difficulty throwing curves in his home park and preferred to use sliders. The complaint also dates back to the organization’s early days. Darren Holmes, who pitched in Colorado from 1993 to 1997, recently recalled: “My best pitch was my curveball, and it wasn't doing what it was supposed to do. I couldn't get it down in the strike zone to save my life.”

Whether because of specific research or just general feedback from pitchers and catchers, the organization seems to have embraced the slider as a way of life and eliminate curves. According to Pitch Info, their curveball usage, as a percentage of pitches thrown, has decreased over the past five years:

The seven Rockies pitchers with the most WAR since 2011 were all slider-dominant; most don’t even feature a curve at all. The slider-heavy strategy that may have even crossed over into the draft world: First-round picks Tyler Anderson, Eddie Butler, and Jonathan Gray all feature sliders as their breaking ball of choice. (What a waste it would have been to draft someone like Stephen Strasburg and waste that curve in the Rocky Mountain air!)

Jordan Lyles serves as an interesting case study. Last year was his first with the Rockies after several in Houston. There, Lyles had used his spike curveball secondary to his slider. He did in April of last year as well, but by June he had weaned himself off the pitch almost completely: 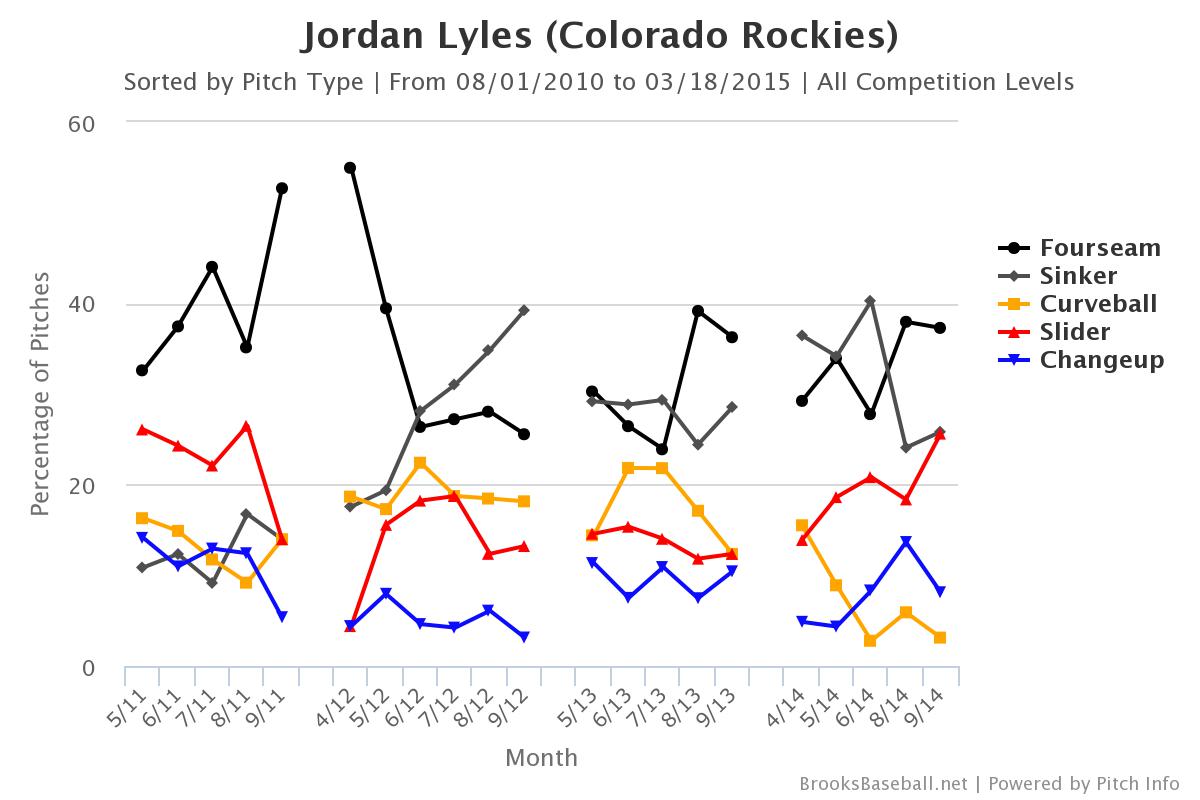 Next year’s grand experiment will be Kyle Kendrick, the only member of the projected starting rotation without a slider—his curveball is seldom-used and minimally effective. He does feature a soft cutter, however, that might play even more like a slider in Denver. I’m particularly curious to see how a finesse pitcher like Kendrick, who needs to funk it up a little bit to get outs, would succeed in a Rockies uniform.

I kid, of course. The grand experiment will be Gray, who is nearly ready for prime time. Rockies management a year ago might have had an incentive to keep him for a little while at Triple-A Colorado Springs to simulate the high altitude atmosphere of the big-league club—but starting this season, the Rockies’ Triple-A affiliate is Albuquerque. Personally, I doubt the air will matter much with his breaking ball. Its shape is deep rather than sweeping, and should play fine as long as his heater does.

You need to be logged in to comment. Login or Subscribe
jhardman
Uhm, Albuquerquw's elevation is also approximately a mile high....just like Colorado Springs and Denver....
Reply to jhardman
SixToolPlayer
Well I'll be darned! Shows you what I know. I just work here.
Reply to SixToolPlayer
jhardman
Sorry for the typo. Weird Al Yankovic can't spell Albuquerque either. :-)
Reply to jhardman
tsweber
Albuquerque ballpark is at 5,312 ft, roughly equivalent to the 5280 ft at Coors. Colorado Springs, however, has a ballpark elevation over 6,540 ft.

So, Albuquerque should be roughly similar in atmospheric effect to Coors, and a better place to pitch than Colorado Springs.

Reply to tsweber
Oleoay
As a subtle thing, it's also got a similar kind of temperature (though a little cooler) than the Rockies spring training site in Arizona, so in theory, there's less of a weather adjustment.
Reply to Oleoay
Oleoay
The Rockies have been focusing a lot on changeups too in recent years. De La Rosa's got a great one and Matzek's developing his.
Reply to Oleoay
a-nathan
tsweber: I disagree with your comment and the numbers on air density. I have air density proportional to exp(-elev*beta), with elev in ft and beta=3.709e-5. The derivative wrt elev is largest when elev=0, so a change of 1000 ft at sea level is greater than a change of 1000 ft at 1 mile above sea level. Specifically, I find a change of 0.043 kg/m^3 between 0 and 1000 and 0.036 kg/m^3 between 5280 and 6280.

Commenting more generally on Dan's article: For sure there is less movement to the curveball at higher elevation. However, I would also expect less movement to the slider, for exactly the same reason. On the other hand, there is more "sink" to a sinkerball at the higher elevation. So if I were advising the Rockies, I would load up on sinkerball pitchers. If instead they have loaded up on pitchers who throw sliders, then I must be missing something.
Reply to a-nathan
tsweber
Alan,
You are wrong. Just that simple. Air density decreases in a non-linear fashion, with density decrease accelerating at higher altitudes. Check your facts, site your sources, and don't correct people when you are wrong.
Reply to tsweber
a-nathan
tsweber: I'm sorry but I just don't agree with you. Here is one reference: http://www2.engr.arizona.edu/~sysengr/publishedPapers/AirDensity.pdf (eq. 8,9). A web search will find many other references. All the references I have consulted have air density decreasing exponentially as a function of elevation. It is also predicted by statistical mechanics and the kinetic theory of gases. If exponential, then clearly nonlinear, but with decreasing (not increasing) rate at higher elevations.

I'd be happy to continue this discussion privately over e-mail (a-nathan@illinois.edu).