In 2012, Gavin Floyd made five starts for the White Sox before needing Tommy John surgery. He signed with the Braves last winter, and made nine impressive starts before a stress fracture in his elbow truncated his season. After signing with the Indians this winter, Floyd looked to be in the pole position to claim the fifth starter’s job in Cleveland. Alas, this time, he didn’t even make it as far as the trip North. A recurrence of the stress fracture will shelve him indefinitely.

Happily, the Indians have several remaining options for the back end of their rotation. If we assume that Corey Kluber, Carlos Carrasco, Trevor Bauer and Danny Salazar all have spots sewn up, the remaining candidates to round out the unit are T.J. House, Zach McAllister and Josh Tomlin. Those may not be household names, but they’re more than usually credible as spare parts. They’ve combined to make 153 starts in the majors, including 49 last season. Tomlin will be 30 this season, and is the oldest of the bunch. The Indians have a deep corps of starting pitchers, is what I’m saying, and that’s especially true given how little they’re spending on it.

Including Floyd’s $4-million salary, the 2015 Indians will spend right around $12.3 million for their top eight starting candidates. That represents not only the second-lowest absolute investment in starters, but the second-lowest share of total team payroll for any team in baseball. 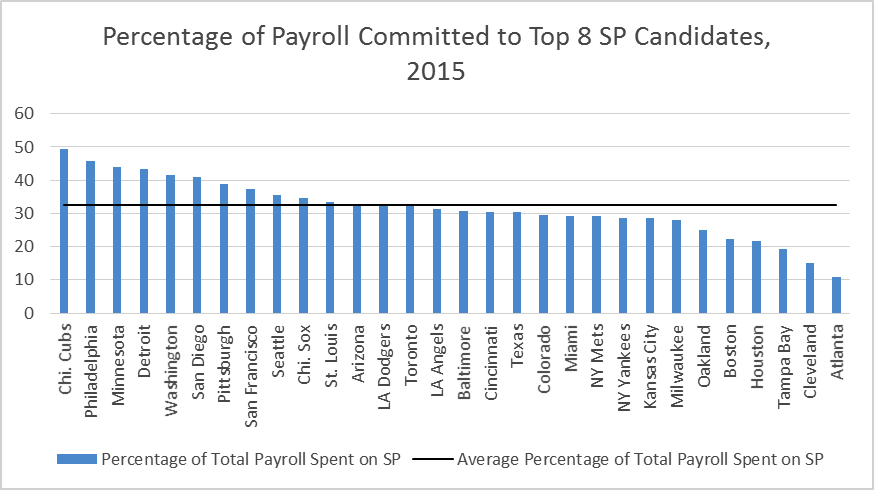 That’s interesting on its own, but given the particular collection of arms the Indians have, it’s downright fascinating. Because the thing is, the Indians could have one of the best starting rotations in baseball—or they could be a nightmare.

It’s not enough to say that this rotation is more vulnerable to injury than the average one, but that does need to be said. Salazar, Carrasco and Tomlin all have had Tommy John surgery. Salazar, Bauer and House all are young enough that their injury risk is heightened simply by the likelihood that their musculature is still maturing.

Even without injury risk taken into account, though, Cleveland would have a very broad range of possible outcomes. The volatility and uniqueness of several of these players’ career paths to date make predicting what they will do next an even more difficult task than predicting the future usually is. You know about Kluber, who nearly perfected the modern delivery, at age 28. You know about Carrasco, whose journey not only involved figuring things out in terms of actual performance, but required him to stop being such a knucklehead. You know about Bauer, whose future remains murky, but whose talent is apparent and whose upside is well established.

You might know about Salazar. In parts of the past two seasons, he has accumulated exactly 162 innings at the MLB level. He has struck out 185, and put 49 on base due to wildness (either unintentional walks or hit battters). He has a fastball that occasionally hits triple digits, and his changeup is filthy. On the other hand, aside from being an injury risk on two fronts, he showed some serious growing pains early last year. In eight starts over the first six weeks of the season, Salazar had a 5.53 ERA. He was striking out plenty of batters and not walking all that many, but hitters absolutely teed off on him. They were hitting .301/.364/.521 against him when he was banished to Triple-A. He would miss two weeks with a triceps strain, labor in Columbus until late July, and then return to hold the league to .255/.304/.363 (with a 3.50 ERA) in his final 12 starts.

You probably don’t know that much about House, but he might have the most incredible story of them all. For five straight seasons, and about a third of another, House was a below-average starter in the minor leagues. He slowly made his way up the organizational chain, but appeared to be going nowhere. He snuck onto the tail end of the Cleveland prospect list entering 2011, with Kevin Goldstein rating him the 20th-best guy in the system at the time. That was as close as he ever came to tasting prospect glory. Last year’s Annual said House’s “days as a starter [were] numbered,” and there was absolutely no reason to doubt that. Then, when he was called up to fill the black hole at the back of the rotation in 2014, he simply went through the league like a hot knife through butter. He ended up with a 3.35 ERA in over 100 innings pitched, and with 80 strikeouts against 28 free passes, that wasn’t (entirely) a fluke.

As remarkable as House’s story is, and as impressive as it is that the Indians have seen so many pitchers through rocky developmental periods and captured their value at the big-league level, there’s just no way to be confident that this group is going to turn in a strong collective campaign again in 2015. Too many things could go wrong, go right back off the tracks, the way Salazar did early in 2014, the way Carrasco did early in 2013, the way Bauer did in his abortive would-be rookie seasons of 2012 and 2013.

We can demonstrate this statistically. PECOTA doesn’t just project each player for a single, specific set of numbers. It’s a probabilistic system, as all projection systems are, and as such, we can look not only at what PECOTA thinks a player is most likely to do, but what it considers to be the spectrum of possible outcomes for that player. It’s right there on each guy’s BP player card: the PECOTA-projected lines at each percentile, from the 90th (basically the best a player could possibly be reasonably expected to achieve) to the 10th (the nightmare scenario). The spread from one number to the next is not the same for all players.

To give us an idea of what kind of variance the Indians are looking at, I chose a comparable pitcher for each arm in their rotation. (For the sake of the exercise, I’m giving House the fifth slot.) The requirements were simple and subjective, though I exercised as much objectivity as I could to avoid cherry-picking in service of a hypothesis: same age, close in overall expected value, some similarity in terms of career path. For both the Indians themselves and for this control group of comparables, I then went through and subtracted their 50th-percentile projected FRA from the same figure at each percentile level. For instance, PECOTA pegs Salazar for a 4.04 FRA at the median level. His 90th-percentile projection, though, is for a 2.91 FRA. The difference between those is 1.23.

Here are the results of that simple process.

At the bottom, I’ve aggregated the average difference for each group at each level. Those numbers probably understate the real difference in the spectrum of possibilities, though. Every single Indians starter has wider ranges of possible outcomes, and more variance from the mean at each level, than his comparable player. That variance could cancel itself out in places, as an average suggests, or it could pile up and really send things snowballing in one direction or the other.

What does this tell us, other than that the Indians are one of the toughest teams in baseball about whom to prognosticate this spring? Well, for one thing, when it comes to pitchers, ceiling comes cheap. The Indians employ the reigning Cy Young champion, a former third-overall draft pick, three guys who struck out at least a quarter of opposing batters last season and three who throw at least 95 miles per hour regularly. The five pitchers in this proposed rotation will make a combined $6.2 million and change this season. Part of that is, again, that the Indians were excruciatingly patient with the development of these arms, gave them more chances than most organizations would have given, and are now reaping the benefits (while also maintaining many years of team control over the group). Part, though, is that the front office’s appetite for risk here has been stunningly high. Most teams simply wouldn’t allow this much variance to build within one segment of its roster.

In this market, though, you pay for the floor. The Indians don’t really have one. They could fall apart in utterly spectacular fashion, in a way that the Cubs (look at Arrieta and Hendricks, and recall that the team also has steady veterans Jon Lester and Jason Hammel on the payroll) or the Giants (there’s nothing sexy about the old arms around Madison Bumgarner in that group, but everyone has a track record and a degree of consistency the Tribe can’t match) couldn’t. Really, let’s repeat the table we made up there, but replace the control group with the Giants’ rotation:

They’ve made a conscious choice (really, a series of them) to get to this point, though, so it’s unlikely they’re losing sleep over it. If the low, low price of their high-upside staff gives them enough flexibility to make a big addition sometime this summer (be it a more surefire ace, or a big bat to bolster an offense that should be strong), the gambit will have more than paid off. They just have to get deep enough into summer to make that matter, without having the ground sink beneath their feet.

You need to be logged in to comment. Login or Subscribe
ufoboy90
Great article. I've always had trouble gauging variability in projected outcomes from glancing at PECOTA cards. It would be really interesting to see, for example, what % of projected starters have a >2 FRA range between their 10th and 90th projectiles.
Reply to ufoboy90
jfranco77
Can we get a follow-up looking at all the teams? Pretty please? Just some kind of ranking from 1-30 of their 90% FRA minus their 10% FRA?
Reply to jfranco77
lyricalkiller
Answered: http://www.baseballprospectus.com/article.php?articleid=25772
Reply to lyricalkiller
hyprvypr
On pure stuff this has to be one of the best rotations in baseball. What they are lacking is experience and with that, command. If they can get two or three guys improving their command anything like Corey Kluber than this may be the best rotation in baseball.
Reply to hyprvypr
RussHaigis
Me no like math, but me like this article. I'm glad to read that I won't be the only one watching this group closely this season.
Reply to RussHaigis