You will argue with the headline. How can the reigning Cy Young winner be underrated or overlooked? He just won the Cy Young. He just won the NL MVP! There are no officially sanctioned ways of rating or looking at pitchers that trump those two. And yet…

Think about the last time you read something about Kershaw, before today. It was, quite possibly, four or five months ago. You have probably read articles about how good James Paxton and Drew Hutchison and Rick Porcello are since you last read one about how good Kershaw is. Let’s quickly survey the Kershaw Articles tally from this offseason:

All in all those seven pieces don’t exactly make you think, “man, this guy is the best in the game right now.” Two focused on his worst moments of the season, another one side-banked the same topic, one featured a photo illustration of Kershaw being served, and one—headlined “The Downside of Clayton Kershaw"—was, at its premise, about how he's just a fragile human being like the rest of us.

Not long ago, I was looking at which pitchers improved their K%-BB% the most from 2013 to 2014. I wasn’t shocked to see many great pitchers near the top of the list, but I was shocked to see Clayton Kershaw right up there at the top. From 2013 to last season, Kershaw improved his K%-BB% by eight percentage points, going from 19.8% to 27.8%. He was both the best pitcher in baseball in 2013 and among the most improved pitchers in baseball in 2014. Holy crap. He’s getting better. And, yes, this fact has gone overlooked.

Kershaw’s 2014 season was historic, arguably up there with anything Greg Maddux or Tom Seaver or Walter Johnson ever did. By FIP+, it was the 10th-best season by a starting pitcher since 1900. Only five pitchers have posted better seasons by FIP+ than Kershaw’s 2014:

This happened. We watched it, we voted on it (“Aye,” unanimously) and then we filed it away. We didn’t frame it and put it above the dining room table. We rolled it up and found a place for it in storage. We must find room in our lives for this season.

We all know Kershaw has been dominant since he entered the league, but his focus on improving and utilizing his command has made him an even more dangerous pitcher than he was a year ago. Last season Kershaw threw first-pitch strikes at the highest rate of his career (68.1 percent). He threw more pitches in the zone than in any previous season of his career (52.6 percent). He induced more swings than ever before (52.5 percent), likely a result of his throwing more pitches in the strike zone. When those hitters did swing at Kershaw’s offerings they made less contact, especially on pitches outside the strike zone. The result was a 24 percent increase in whiffs, and half as many runs allowed as a league-average pitcher.

Over time Kershaw has tweaked and improved, making subtle changes to an already dominant approach. These tweaks weren’t significant on their own but have, over the years, built on one another to bring his game to another level. Here are some of the improved results Kershaw has seen over the past few seasons:

Those four simple charts show one very important thing. Among four of the most important things a pitcher can improve, Kershaw genuinely has done so.

This is especially true in recent seasons, which leads to the inevitable question: How has he done this?

One area where Kershaw has tweaked and improved is through his ever-evolving pitch usage. He’s gone from being a fastball-heavy pitcher in his early 20s to using a more nuanced approach in recent seasons. His fastball usage has dropped 23 percent since his rookie year, while his usages of the slider and curveball have filled in the gaps. 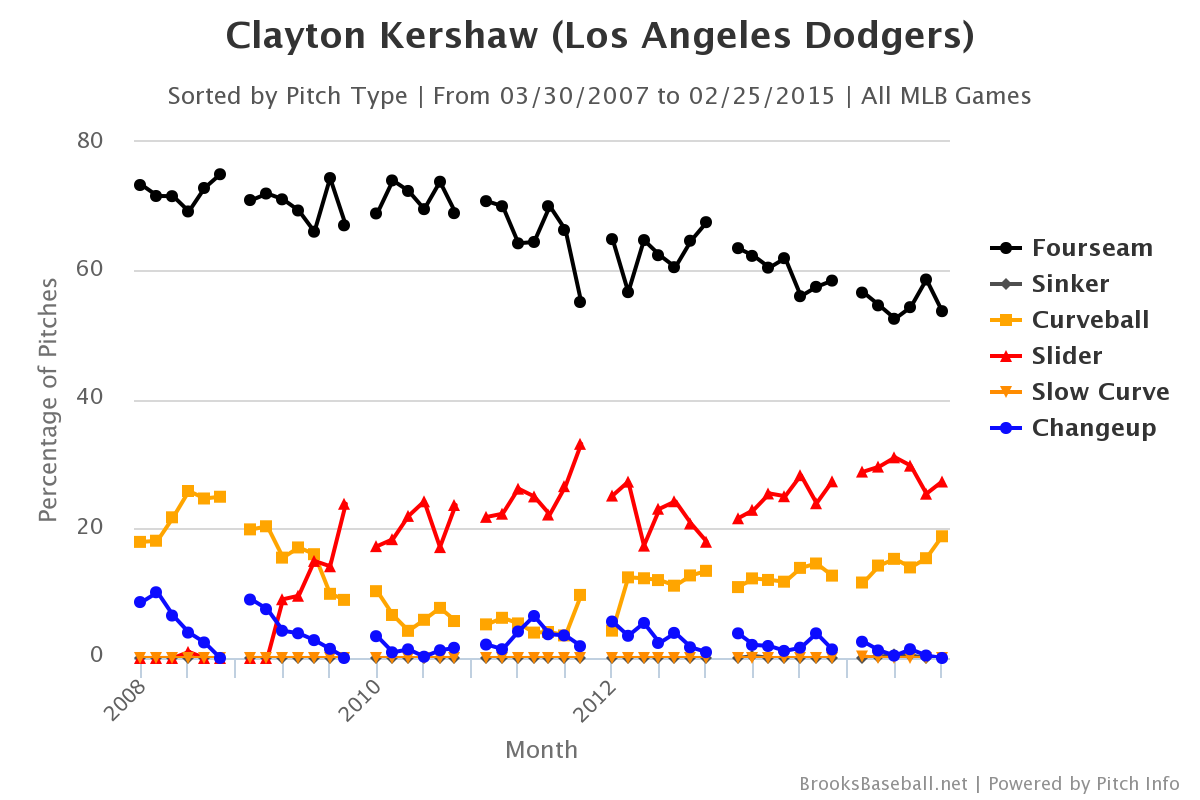 In addition to changing his pitch usage over time, Kershaw has also tweaked his approach quite a bit. Early in his career Kershaw lived up in the zone more often, which helps to explain his pedestrian GB/FB rates through the first few seasons of his career. As he developed his slider and curveball, Kershaw began pitching down in the zone more often. Here is that change in approach visualized, where a clear migration in pitch location can be easily detected:

This helps explain the spike in GB/FB ratio over the past few seasons, but only to a point. What's really notable is that Kershaw has become a groundball-heavy pitcher without anything resembling a groundball approach. He relies mostly on two pitches with the worst groundball rates among pitch types, the four-seamer and the slider. His slider has the 15th-highest groundball rate among all starters last year, and his four-seamer had the seventh highest. In other words, Kershaw gets all the benefits of a four-seamer (velocity, control) and a slider (velocity, harder for the hitter to pick up, less-hittable mistakes) while also getting the groundball benefits one would get from a two-seamer and a curve. Heck, even on breaking balls up in the zone, or up out of the zone, he somehow managed a solid groundball rate last year. This doesn't quite explain how Kershaw is so good right now, but goes a long way to the why.

On top of that, Kershaw has developed his pitch movement to provide more different looks to opposing hitters. Back in 2008, Kershaw had essentially two areas of pitch movement. His fastballs and changeups clustered together, with his curve coming at the other end of his pitch break area: 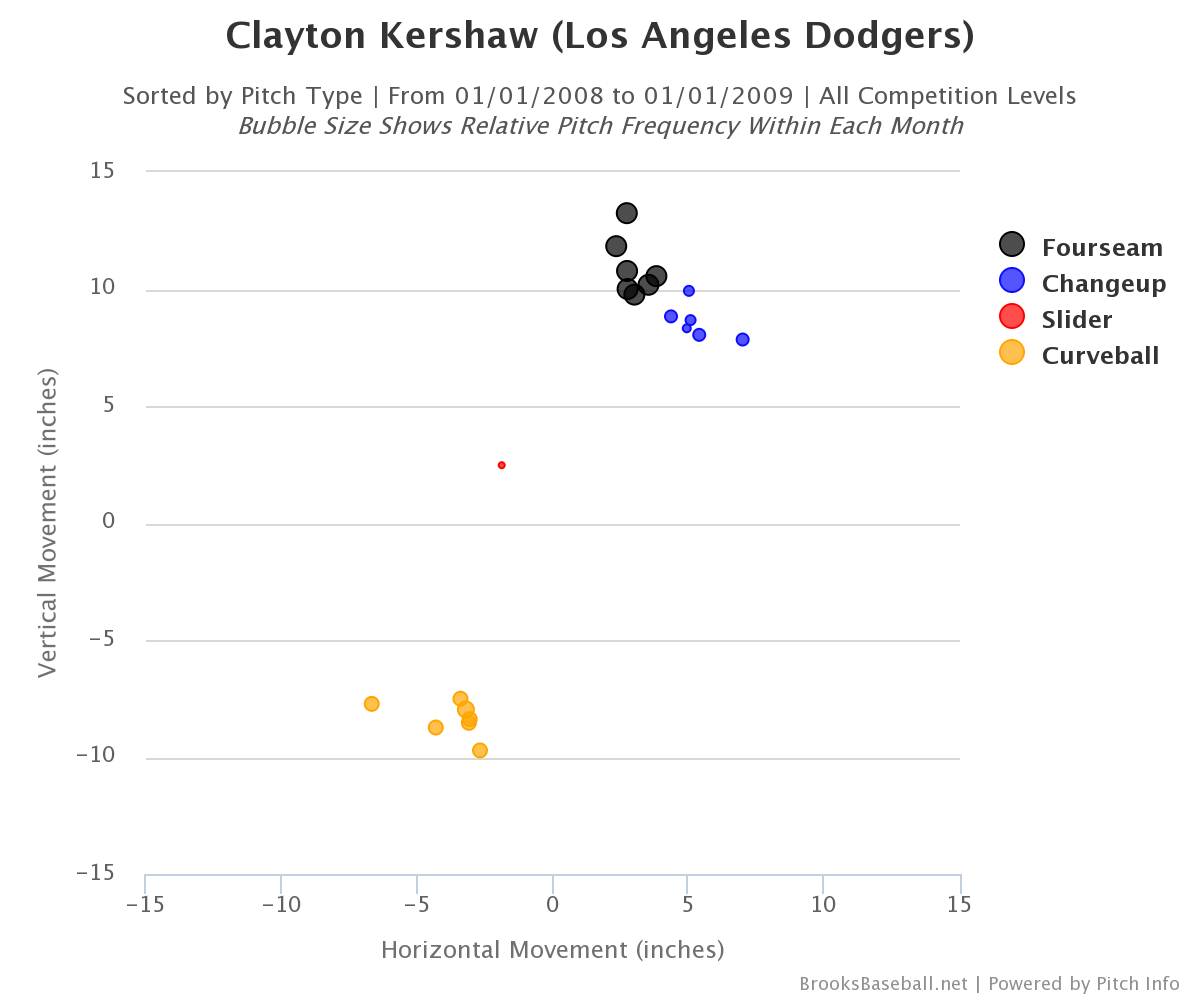 In recent seasons however, Kershaw has worked to create more of a distinction in movement between his fastball and change. By including the slider as a significant part of his repertoire, Kershaw has also included a new portion of his overall pitch break area that opposing hitters must account for: 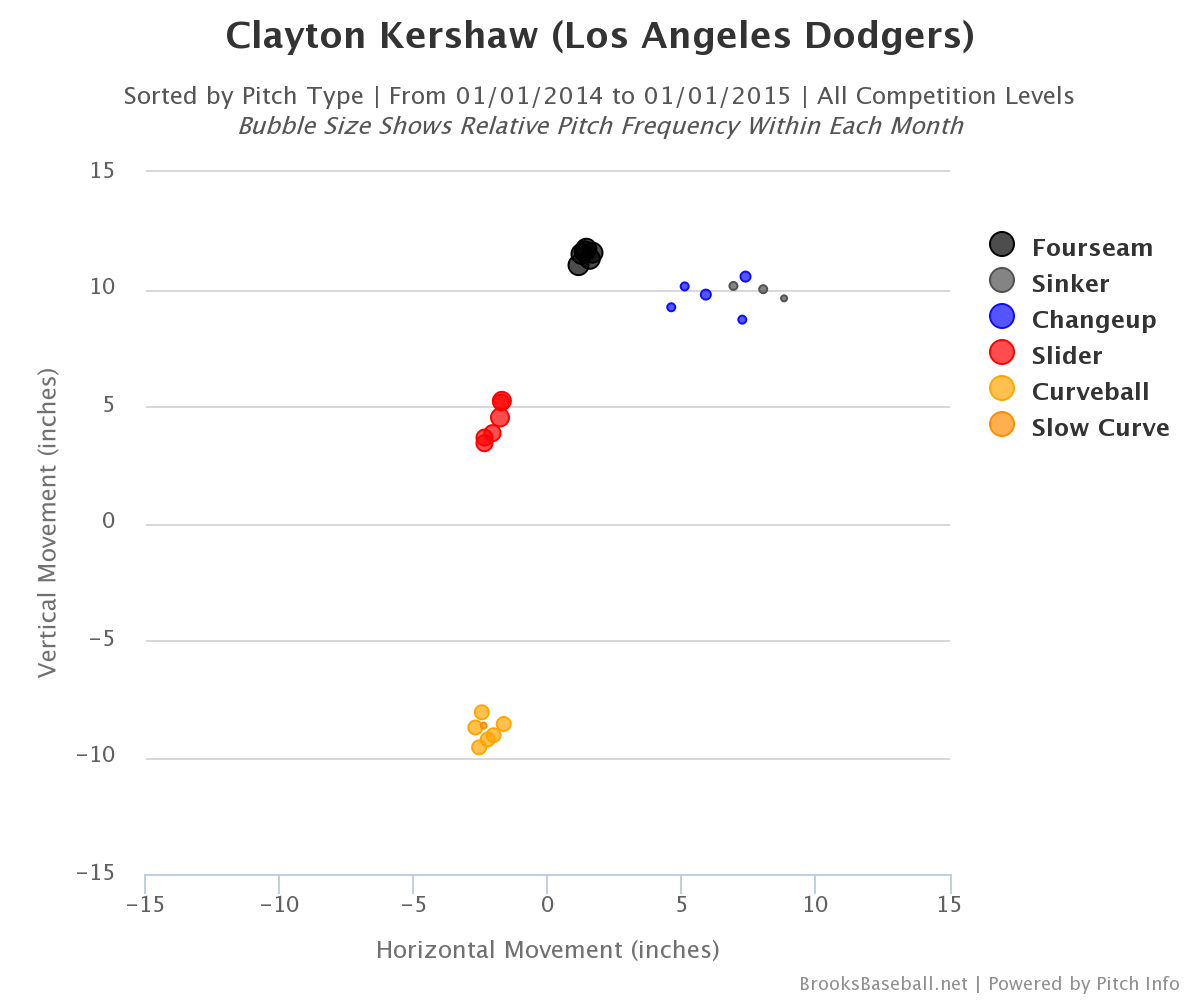 All of this constant tweaking makes you wonder: What if Kershaw’s best days are still ahead of him? Last season he produced 6.1 WARP despite throwing nearly 40 fewer innings than he did the prior year. Does PECOTA think he’ll be able to maintain that performance? In a word: yes. Kershaw is projected to produce 6.0 WARP in 2015, but that doesn’t give the full picture of how bullish PECOTA is on the Dodgers’ lefty.

PECOTA suggests that Kershaw has a 23 percent chance of “breaking out” next season. In previous weeks we explored PECOTA’s breakout standards, noting that a pitcher is considered to have a breakout season if he improves his FRA by 20 percent from his baseline projection. In oversimplified terms, that means that PECOTA believes that there’s a 23 percent chance that Kershaw will be 20 percent better in 2015 than he has already been!

Not only that, but (using the historical results of Kershaw’s pitcher comparables) PECOTA believes that there’s a 60 percent chance that Kershaw improves at all which would, again, mean that his 2015 could be better than his unbelievable 2012-2014 efforts. Kershaw’s 90th percentile projections would be worth 8.8 WARP. For some context, only three pitchers (Pedro Martinez in 1999; Randy Johnson in 1999, 2000, 2001; and Bert Blyleven in 1973) have ever eclipsed the 8-WARP mark.

Granted, a 90th percentile projection is defined by its rarity. Still, Kershaw’s constant tweaking has led to improvement over his career, and there’s no reason to believe that has to end in 2015. I mean, good heavens: Just imagine if he ever gets a changeup that he loves.

It’s so easy to overlook greatness. Sometimes we don’t notice it—like that Washington Post stunt involving world-class violinist Joshua Bell, we literally don’t notice it—but those instances are rare. More often, we notice it, we fall in love with it, we draw joy from it, and then we cease to be amazed. We demand more. Everything’s amazing, nobody’s happy. Well hey, people. Cease your ceasing. Be amazed. History is happening, and every second of it is worth appreciating.

Thanks to Doug Thorburn for assistance.

Seriously, though, interesting stuff. Your links below are kind of useless until you differentiate the headlines a little bit, however.
Reply to delatopia
misterjohnny
Fans in Southern California need to count their blessings. We get to see Clayton Kershaw and Mike Trout every day.
Reply to misterjohnny
jgarrr
Technically, only those of you that have Time Warner cable get to see Kershaw. =)
Reply to jgarrr
352361957
And those Cardinal fans just love to see him on the mound......
Reply to 352361957
kmbart
Why have "Clay the K Day" on March 9th instead of March 19th (his birthday)? What was gained by jumping the gun by 10 days? Is March 9th traditionally a slow day in the Baseball Analytics annual calendar and you wanted to have some filler for those electronic column inches?
Reply to kmbart