There’s a funny thing happening in college football. The University of Oregon has gotten very good at recruiting and even better at winning football games, which is normal enough, but the funny thing is that they’ve gotten better at winning games much faster than they’ve gotten better at recruiting. Over the past four years the Ducks have a composite recruiting class ranking of 18, which is good but not great, especially for a perennial national championship contender. When it comes to outperforming their expected performance based on recruiting class rankings, though, Oregon was the second-best school in the country, according to analysis from FiveThirtyEight.

After two consecutive bowl appearances in the mid-1990s, Nike founder Phil Knight got involved and planted the seeds for a college football behemoth. The re-branding of the school and specifically the football program proved to be a boon to the university. The eye-catching uniform combinations have become a common sight on primetime. So while Oregon is recruiting more and better players than they did 20 years ago, they’re also playing a whole heck of a lot better than they have any right to it would seem. There are undoubtedly a lot of factors that play a huge role in Oregon’s success, but do the uniforms and the logo have anything to do with it? Is it possible that players play harder when they look good? Is it possible that there’s more than just a spurious correlation between the logo on a player’s hat and their performance on the field?

But let's not let that stop us. 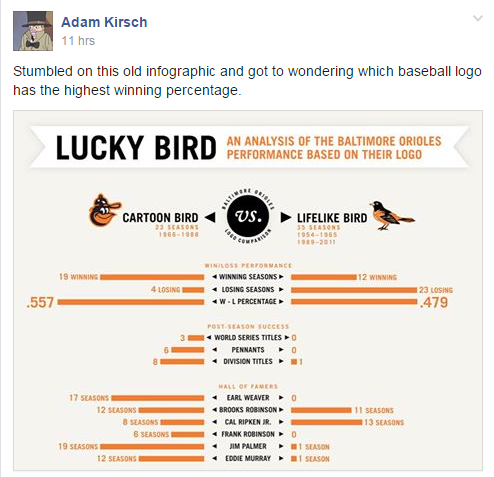 The wheels started spinning and many hours later I had a spreadsheet of every primary logo a team had used and the corresponding records of the teams that wore them. There’s almost no chance that team performance is tied to the logo the players wore, but indulge me for a few minutes as we try to uncover which logos have seen the most success in MLB history.

I went back through 1900 in most cases (for a handful of teams I was able to go back a few years further, into the late 1800s) and found 328 distinct logos that teams used as their primary option for at least one full season. In many cases these logos lasted just one year, though some teams went several decades without altering their primary logo. Using Sportslogos.net and Baseball Reference, I pulled records for every franchise since their inception and mapped them to the logos that the teams wore over those seasons. The first priority was determining a leaderboard for the winningest logos in MLB history:

Every single one of the top five and bottom five seasons falls between 1897 and 1938, and many of those logos were only donned by the players for one season. The primary concern with that, of course, is that the leaders skew toward teams that sported a particular logo for just one season, with it being much easier to have one extreme outlier season than to have 20 consecutive outlier seasons. It’s because of this that teams like the Dodgers, who won 4,593 games while wearing the logo below, are excluded from the top of the leaderboard:

In fact, that Dodgers logo may have seen more games won than any other logo in MLB history, but its winning percentage would place it 90th overall. In order to manipulate the data and get a better idea of how to assess the success of each logo in question, I enlisted the help of friend and colleague Bryan Cole.

The plan we devised used the concept that a team has a 50 percent chance of winning any given game over the course of a full season. From there we could identify how many more games each team won over a given time period than was expected, and calculate the likelihood that the team could outperform that record by random chance. The teams that posted records with the lowest likelihood of being outperformed by random chance would be our new leaders. This leaderboard gives teams that won a lot of games over longer time frames with a single logo more credit, and creates a more expected top 5:

Top 5 Logos by Likelihood of Randomness

Bottom 5 Logos by Likelihood of Randomness

This method shows that the Yankees’.598 winning percentage from 1915 to 1946 was more difficult to put up than the Cubs’ .763 winning percentage in 1906, which intuitively makes some sense. Granted, this doesn’t account for the competitiveness of the league during each season, but it gives a better estimation of the life each of these logos lived.

For the record, our advanced method shows that the Dodgers’ 1958-2011 logo had the 16th-best tenure of all time. That would suggest that it’s more difficult for a team to win 53.5 percent of their games over 50-plus seasons than to win 76.3 percent of the games in one given season. In an article dedicated to the frivolous, this little insight actually stands as somewhat profound.

The last question to ponder is which current logo has lived the best life. That crown, by our more advanced method, would go to the Yankees’ iconic “NY” logo that the club has used since 1968. If you use pure winning percentage however, the Atlanta Braves’ current logo boasts a .569 winning percentage, bettering the Yankees by just .009 points. After the 2015 season, the Yankees might just hold the crown. That said, the Angels (.559) and Nationals (.557) both stand a chance of ending the 2015 season with the winningest current logo.

There is next to no reason the University of Oregon should have a good football team. Eugene is a small city and is not near a major media market, there’s very little local college-caliber talent, and for literally 100 years the Ducks did almost nothing but lose. But the past decade and a half has been different. They’ve been to the Rose Bowl, the Cotton Bowl, the Fiesta Bowl, and last year’s national championship game, and they will start this season Saturday night against Louisiana State in Arlington, Texas, ranked third in the country. How did this happen?

At the top of the list of reasons: their uniforms.

Not to Rachel Bachman. “It all starts with the uniforms,” said the sports business reporter for the Oregonian.

Not to Paul Swangard. “The uniforms, I think, more than anything else,” said the managing director of the university’s Warsaw Sports Marketing Center, “are probably the key ingredient.”

And not to Tinker Hatfield. “What is a more visible way to turn up the heat and create a personality,” the famous Nike designer said, “than through the football uniforms?”

How Does Oregon Football Keep Winning?

Has any MLB team ever had a logo that made its players perform better than they otherwise had any right to? Maybe. Probably not. No matter how much we hear players talk about how they always wanted to wear pinstripes or whatever it is they say upon joining a new team, there’s no reason to believe that performance is effected by a team’s logo.

And yet, these logos adorn the uniforms, hats, and memorabilia that fans buy in bulk each spring, summer, and fall. So for a second, let’s suspend belief and imagine there might be some magic in an iconic logo. If people are seriously wondering about the impact Oregon’s uniforms have had on the school’s performance, then it’s not a big stretch to apply a similar thought process to the logos of Major League Baseball. Of course, the logo doesn't matter. But whether it matters doesn't itself matter: It's the logo, after all, that gets soaked in champagne or dryly heaped in a laundry bin at the end of each season.

Thanks to Bryan Cole for research and mathematical assistance on short notice!

You need to be logged in to comment. Login or Subscribe
Michael
The most entertaining nickname in this article is easier to determine: the Beaneaters! Hard to imagine a marketing department today using that name.

Maybe the worst logo in this article subjectively is the Phillies 1939-43 logo. After decades with a muddy blue logo when one can't tell at a distance what it is, they redesigned it to come up with a different border but without fixing the problem.
Reply to Michael
tbwhite
Yep, some things, like the Phillies, never change. Re-arranging the deck chairs for 100+ seasons...
Reply to tbwhite
wthomson
All this is well and good, but the best sports logo and nickname of all time is that of the Lansing Lugnuts (http://www.milb.com/index.jsp?sid=t499). No contest. Case closed.
Reply to wthomson
jfranco77
Carl Hanratty: Tell me this, Barry Allen, Secret Service. How did you know I wouldn't look in your wallet?

Frank Abagnale, Jr.: The same reason the Yankees always win. Nobody can keep their eyes off the pinstripes.

Carl Hanratty: The Yankees win because they have Mickey Mantle.
Reply to jfranco77
BSLJeffLong
I almost included that quote but ended up leaving it out for some reason. Glad at least one other person had the same thought as me!
Reply to BSLJeffLong
timber
Considering that high school senior athletes have been known to select their colleges based on which sneaker company it uses, I would not be at all surprised to learn that the colleges with the coolest uniforms attract the best players. Therefore, I think it's unwise to dismiss the correlation between success and jersey out of hand.

And yes, I'm serious.
Reply to timber
Robotey
I think the answer lies more with the sneaker company in question, in this case, world wide icon: Nike.
Reply to Robotey