Angels evaluating Alex Yarbrough at multiple spots
The Halos don’t have much in the way of high-ceiling hitting prospects, but they do have a potential Factor on the Farm. Alex Yarbrough, a 23-year-old second baseman who batted .285/.321/.397 for Double-A Arkansas last year, is attracting attention from manager Mike Scioscia as a candidate for the big-league utility job.

Anaheim’s fourth-round pick in the 2012 draft, Yarbrough boasts a solid-to-plus hit tool—the carrying attribute that will get him to the majors. The Ole Miss product is unlikely to stick as a regular, so it’s important for him to maximize his versatility. But there are reasons to question whether Yarbrough can be a productive defender away from the keystone.

Specifically, Nick J. Faleris wrote in the top 10 list linked above that Yarbrough “lacks the range or arm to profile well in a utility role.” He’s “fringy” at second base, too, but iffy range would be an even greater impediment at shortstop and a subpar arm would hinder Yarbrough at third. Being a switch-hitter should work in Yarbrough’s favor, but while he might compile strong batting averages, he’s unlikely to deliver much in the way of power or walks. That sort of offensive outlook won’t fly at first or in left, the two positions where Yarbrough’s tool deficiencies can best be masked.

Based on his comments to reporters, Scioscia will give Yarbrough a fair shake at all of those spots, so that he can see for himself what the Texan might bring if called upon. The scouting report is cause for pessimism, but considering the question marks surrounding Josh Hamilton’s status and the Josh Rutledge, Grant Green, Johnny Giavotella, Taylor Featherston depth chart at second base, the Halos might find work for Yarbrough before too long.

Wil Myers could bat leadoff for Padres
When one thinks of leadoff-hitting center fielders, the players who come to mind are generally speedsters with minimal power. Wil Myers, a corner outfielder masquerading as a center fielder for the Padres’ beer-league softball team, isn’t exactly cut from that cloth. But that might not stop manager Bud Black from writing the ex-Ray's name at the top of his lineup card.

Black mentioned Myers among the candidates to occupy the no. 1 slot in San Diego’s batting order, along with Cameron Maybin, Yangervis Solarte, and Will Venable. The curious thing about that list is that one of its members is not like the others. Maybin, Solarte, and Venable were all Friars when the offseason began, before new GM A.J. Preller set out to find upgrades—or at least competition—for all three of them. Now, Myers is poised to displace Maybin, Justin Upton and Matt Kemp will bump Venable, and Will Middlebrooks is the odds-on favorite to play third base instead of Solarte.

Hence, while there apparently are four candidates to bat leadoff for the Padres, only one of them is a good bet to be in the lineup. Though Black didn’t explicitly say so, if the season started today, it’s safe to say the 24-year-old Myers would get the nod.

Assuming the skipper doesn’t change his mind, Myers could become the first primarily leadoff-hitting center fielder to post more homers than steals since Austin Jackson did it for the 2012 Tigers.

Bartolo Colon sets his 2015 hitting goal
With his 42nd birthday on the horizon, Bartolo Colon is what he is. That’s true on the mound, at the plate, and on the bases. Unfortunately for Colon, still a steady back-end starter even with his quadragenarian card long in hand, the latter two areas garner more attention than the first one.

As the Mets scuffled to a 79-83 finish with Matt Harvey on the shelf, the most reliable source of SNY entertainment took place whenever Colon donned a batting helmet. In fact, when I accidentally searched “2014 Mets record” on Google Images instead of the regular engine, the very first result was… 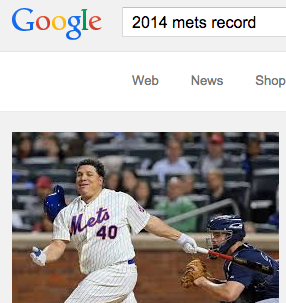 …Colon’s helmet dislodging itself from his head mid-swing.

The hack alone is entertaining enough, as you’ll find by scrolling down in this Sam Miller article from last April. Every time Colon takes the bat off his shoulder, a GIF is born.

It’s no surprise, then, that Colon managed just two hits in 69 plate appearances last year, or that he struck out 33 times. Those two knocks were his first since 2005, and his three runs scored were his first times touching home plate productively since 2002. Colon deserves a reprieve, considering that he spent the vast majority of his career in the American League, but it’s no secret that he commands more attention in the box than on the rubber.

So when it comes to discussing expectations for the upcoming season, the Mets media is as concerned with Colon’s hitting as it is with his pitching. SNY host Robert Brender spoke with first-year hitting coach Kevin Long, who moved across town from the Bronx this offseason, about his expectations of the big right-hander. Long was optimistic enough to suggest that Colon could double his output, but his student isn’t so sure:

Bartolo Colon had 2 hits in 2014. Kevin Long said he asked Bartolo to have his goal be 4 hits this season. Colon said, how about 3.

Say this for Bartolo: He’s a realist.

You need to be logged in to comment. Login or Subscribe
xanderC
The best part about Bartolo at Bat is the hope he gives all of us unathletic shlubs who love baseball. Because if Bartolo Colon is capable of 2 hits in just 69 plate appearances, I'm pretty sure I could manage at least 3.
Reply to xanderC
oldbopper
There are very few things as entertaining as a Bartolo Colon at bat, but there is always the threat that he will end his season with every swing he takes as he did with the Red Sox in 2008.
Reply to oldbopper
yadenr
Batolo Colon!
Reply to yadenr
jfranco77
I mean... unless you want to go with Derek Norris, I'm not sure the Padres have a better option for the leadoff spot.
Reply to jfranco77