Red Sox working to revamp Jackie Bradley Jr.’s swing
After signing Rusney Castillo and Hanley Ramirez this offseason, on the heels of an impressive debut by top prospect Mookie Betts, the Red Sox don’t have a whole lot invested in one of their most-celebrated 2011 draft picks. Jackie Bradley Jr. had his chances to secure a long-term role in Boston’s outfield, and he squandered them by performing so poorly at the plate that his wizardry in center field became an afterthought.

The good news for Bradley is that he’ll only turn 25 on April 19th. Time is still on the University of South Carolina product’s side, and his defensive value means that he doesn’t need to hit all that much to warrant regular playing time. Whether that time comes in Boston or not, assistant hitting coach Victor Rodriguez has set out this spring to help Bradley rediscover the approach that helped him tear up the minors.

WEEI’s John Tomase wrote on Friday that the Red Sox want in particular for Bradley to focus on hammering down on the baseball, producing line drives and sharp grounders instead of the pointless cans of corn he sent toward outfielders last summer. Rodriguez believes he can fix Bradley with a simple drill detailed in the afore-linked WEEI article, which includes a photo taken by Tomase’s colleague Rob Bradford.

Small-sample stats be damned, Bradley was actually a productive hitter last April, when he batted .244 but drew 11 walks and cranked eight doubles to log a .716 OPS. That would be plenty adequate for a Gold Glove-caliber center fielder. Unfortunately, Bradley—who also struck out 25 times in 90 plate appearances during the strong start—never got close to those heights again.

The 40th-overall selection in the 2011 draft, Bradley is, based on his output in the majors to date, a low-ball hitter: 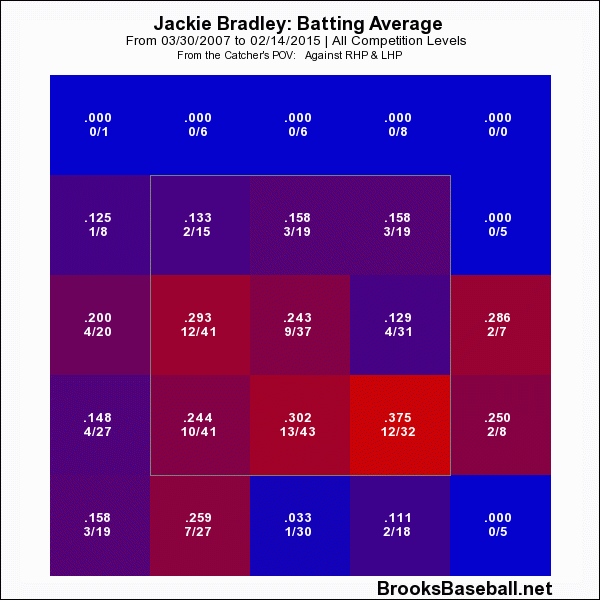 When Jason Parks ranked Bradley as the no. 2 prospect in the Red Sox organization ahead of the 2013 season, he credited him as a hitter who “knows his pitch pocket and attacks.” Couple that with “good pitch-recognition skills,” and you’ve got a “solid-average hit tool,” enough for Bradley to be a potential first-division player despite below-average usable power.

That “knowing his pitch pocket” notion rang true in April 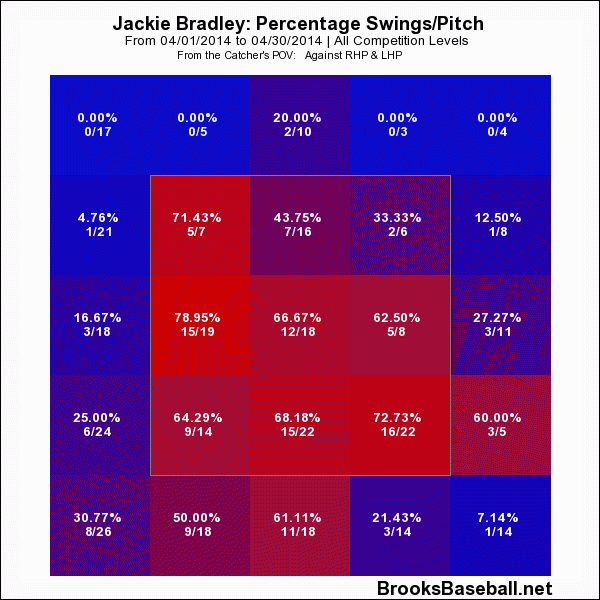 when Bradley swung most frequently at pitches in the hottest zones on his batting-average chart shown earlier. Then, as his luck began to fade, Bradley started pressing and his pitch pocket bloated to include the entire hitting area. 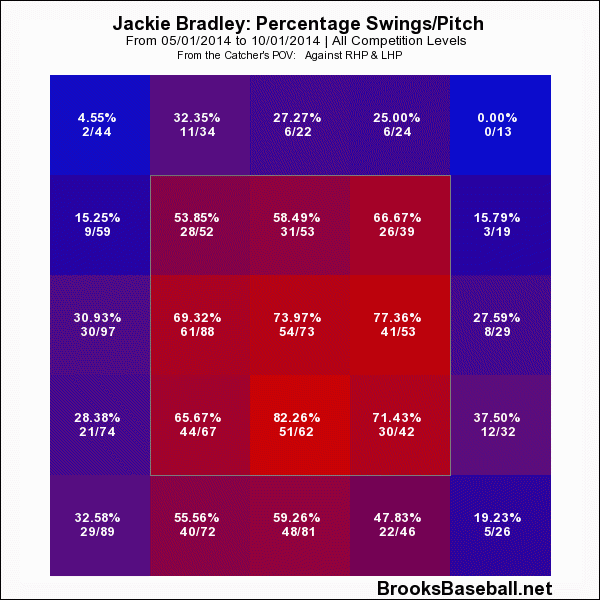 Not only did Bradley expand the zone horizontally, he also began to fish at the letter-high offerings on which he’s virtually powerless. Consequently, his fly-ball rate—especially on fastballs—began to rise after the All-Star break and spiked in September when 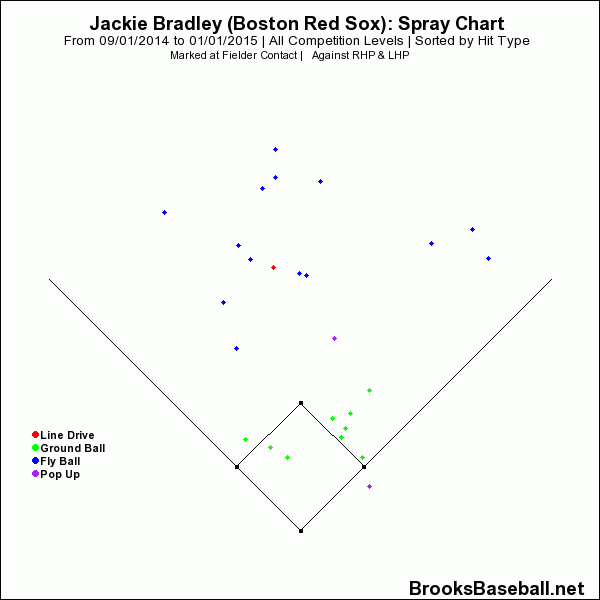 he made 36 plate appearances and managed just one line drive. Bradley also hit only three liners in 39 August trips, but September was the absolute pits. If you’ve ever wondered how a major-league position player can spend a month going 1-for-36 with no walks, 10 strikeouts, and a double-play grounder, the spray chart above tells the story.

It’s also why Rodriguez—who came up through the Red Sox’ farm system around the same time, going from the minor-league hitting coordinator to the majors after the 2012 season—is so confident that he can get Bradley’s career back on track with a few months of simple drill work.

Tomase noted that Bradley moved to Naples, Florida, in the fall so that he could get a head start. He’s been at Boston’s spring facility since around the December holidays, trying to relearn the pitch-pocket discipline and line-drive approach that got him to the Show.

Mets may not trade a pitcher before Opening Day
The Mets have four solid-or-better starting pitchers in Jon Niese, Bartolo Colon, Zack Wheeler, and Jacob deGrom. They’re eagerly awaiting Matt Harvey, who’s on the mend from Tommy John surgery and ready to resume his role. Dillon Gee is on the roster, waiting to learn if he’ll serve as the fifth starter or long man. There’s also Rafael Montero, who saw big-league time in 2014. And don’t forget blue-chipper Noah Syndergaard, who should be ready to debut when called upon. Oh, by the way, no. 2 prospect Steven Matz has a 2015 ETA, too.

So, someone’s gotta go, right? Maybe not. Or, at least, not yet.

According to Marc Carig, the Mets beat writer for Newsday, all of the pitchers listed above should report to St. Lucie for spring training and safely unpack with the expectation of staying there through March.

Despite apparent roster needs—particularly at shortstop, where Wilmer Flores’ glovework is dubious at best—general manager Sandy Alderson is content to hoard arms. It’s a defensible strategy, given that:

· one of them could assume the long-relief job;

· there are no guarantees about Harvey’s return, and there’s a chance the Mets will need to manage his workload.

But it comes weeks after reports that the Mets were fielding offers, most actively on Gee, a back-end starter who drew attention from National League West clubs like the Giants and Rockies. Both of those clubs went in other directions—the Giants re-signed Ryan Vogelsong; the Rockies inked Kyle Kendrick and obtained David Hale from the Braves—leaving Gee in Queens.

Alderson and his counterparts didn’t agree on the right-hander’s worth, and to some extent, it makes sense that the Mets weren’t eager to ship Gee out for an uninspiring return. The 28-year-old is controllable through 2016, relatively cheap ($5.3 million salary in 2015), and just a year removed from 2.1 WARP performance.

It might take a spring-training injury for a club to part with the sort of return Alderson has been seeking. Expect Gee’s name to surface, speculatively or otherwise, every time a starter’s elbow or shoulder barks in the next six weeks.

Chad Gaudin auditioned for Diamondbacks
Consummate journeyman Jamey Wright agreed to a minor-league contract with the Rangers over the weekend, rejoining the organization with which he spent the 2007 and 2008 seasons. Wright has 10 major-league teams on the back of his baseball card, but after choosing a familiar employer for his age-40 year, he’ll struggle to reach 13, the record currently held by Octavio Dotel.

Chad Gaudin, meanwhile, is still on the market, and he’s suited up for nine franchises through his 31st birthday. The right-hander last pitched in the majors with the Giants in 2013, serving in a swingman capacity that yielded 12 starts and 18 bullpen outings. He finished that year on the disabled list with carpal tunnel syndrome and sat out the 2014 campaign with a neck injury, which foiled a late-winter deal with the Phillies.

Gaudin has a couple of things going for him as he looks to return to the majors. The first is his versatility: Although he’s vulnerable to left-handed hitters, he can hold his own as a back-end starter. The second is that he’s become increasingly tough on righties, having limited them to a .193/.249/.312 slash line in 221 plate appearances during his time with the Giants. A smaller, third feather in Gaudin’s cap is his compact delivery, which has stalled opposing running games to the tune of a 35-for-53 (66 percent) steal clip in 836 1/3 big-league frames.

Experience as a swingman is likely the most appealing bullet point on Gaudin’s résumé as far as the Diamondbacks are concerned. Nick Piecoro, who covers the Snakes for the Arizona Republic, heard from general manager Dave Stewart that Gaudin visited the club’s spring facility at Salt River Fields last week for a bullpen session. There were no immediate details on the impression Gaudin left, but we should learn soon if he did enough to secure a minor-league trial.

If he did, a strong March would be the only barrier between Gaudin and his 10th major-league uniform set. That would put him more than eight years ahead of Wright in the journeyman race, and perhaps give Gaudin the best shot of any active player to one day stand alongside or atop Dotel.

You need to be logged in to comment. Login or Subscribe
Muboshgu
Chad Gaudin is way younger than I had thought.
Reply to Muboshgu
statsrath
Same. Kind of crazy that a 34th-round pick debuted at age 20.
Reply to statsrath
Lassaller
Link to John Tomase's blog on Bradley, mentioned above: