The Chicago Cubs have quickly become a vogue pick to make the playoffs. It’s not a crazy choice—they certainly have the potential to do so, but often this type of pick feels more like a popularity contest than analysis. The Cubs haven’t won the Series in a 100-some-odd years, yeah yeah, we’re all aware, so picking them to make the playoffs just makes things more fun. Even Vegas has ridiculous expectations for 2015 (though apparently the Padres' addition of James Shield impacted the Cubs negatively), but even those odds are swayed by the Cubs' popularity. Cubs hype has reached such heights that it’s leading some to get violently ill.

With the Cubs craze came a recent segment on MLB Network that suggested their starting rotation was fourth best in all of baseball right now. I guess if you’re projecting that Jon Lester, who had one of the best walk years for a pitcher in recent memory, repeats 2014 and Jake Arrieta does what he did last summer for 200-plus innings, then you have the makings of a terrifying front. And if Jason Hammel repeats his first half for an entire season, and if Kyle Hendricks proves his three months in the bigs was just the beginning of things to come—well, fourth best may prove to be low. But banking on all those things is a stretch.

However, there is one unit on the Cubs that has gone underhyped: the bullpen. Sure, relievers are a volatile commodity in general, but the Cubs have a collection of power arms, many of whom were very recently starters, none of whom has recently been much discussed on national television broadcasts.

It’s not surprising to see the Cubs bullpen ignored. As a whole, they didn’t put up impressive numbers. They were middle of the pack in the National League in ERA, K%, and BB%, making it quite easy for this group of relievers to be disregarded. However, those pedestrian numbers were in large part due to arms who weren’t a part of what turned into one of the strongest bullpens in the NL by September.

The bullpen's season started bad, fast. It surrendered extra-innings losses in the first two games, with expected fifth starter Carlos Villanueva coming in late and taking the blame in both games. He allowed only one run in each outing, so it's not like he sunk the 'pen's ERA beyond repair, but the problems were only beginning.

The biggest culprit early was Jose Veras. Veras was signed in the offseason to be a veteran presence in the closer’s role and to bring some stability to the ‘pen. However, his short tenure on the North Side was anything but stable. He lasted 13 innings, posted an 8.10 ERA, walked a tick above 17 percent of the batters he faced, a fifth of the flies he allowed left the yard, and managed a dismal 60 percent strand rate. It was so bad for Veras in 2014 that at Cubs Convention a fan told pitching coach Chris Bosio that he’d never seen a worse reliever than Veras.

“It was a mystery to us, to be honest with you,” Bosio told the fan. “We had high expectations for him, but he just never got over the hump. We tried everything in spring training. We let him work on a schedule. I think a lot had to do with confidence coming out of spring training and he just never got the ball rolling. Poor command with his fastball, couldn’t get his secondary stuff over, and I think with his mental side he was beat.”

Of course, Veras wasn’t the only culprit. James Russell failed in a few high-profile outings in the first month of the season, blowing his only two save opportunities: One came during a five-run inning that saw the Cubs lose a 4-0 lead, and the other in an embarrassing meltdown on the day they were celebrating the 100th anniversary of Wrigley Field. In conversations, Russell often bemoaned that he was battling his release point and struggling to find any consistency with his mechanics. 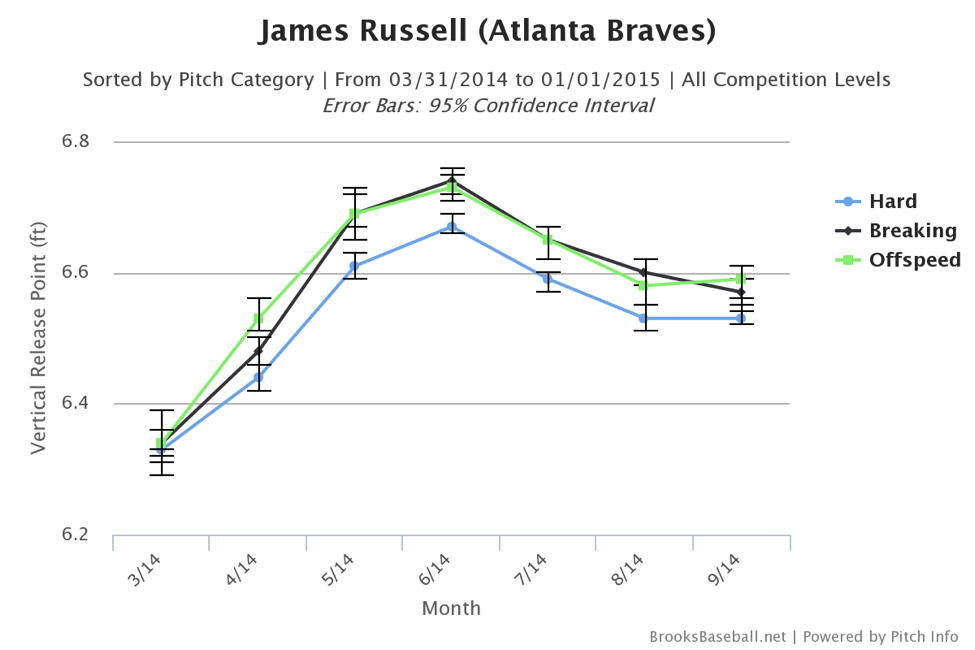 His vertical release point in April (and one outing in March) looks quite different from where it ended up, and he found some success the rest of the way. He quickly bounced back, allowing just two runs in May and June combined, building up enough value to eventually allow the Cubs to package him in a deal to the Atlanta Braves—where he performed quite well—for a solid prospect, Victor Caratini.

The final face of early doom was Pedro Strop. Strop wasn’t awful, but like Russell had some poor outings that were visible to the fans, including, yes, that awful 100th-anniversary game (which inspired me to write this post defending the Cubs bullpen). Things came to a head for Strop after a short outing in early May when he recording just one out, while allowing three runs on three hits and a walk. The erratic righty was placed on the DL with a groin strain after that outing, and though he’d whiffed 27 percent of the batters he had faced he was still sporting a 4.97 ERA and a walk rate pushing 15 percent.

But Strop made a turnaround that was representative of the entire Cubs ‘pen, going from suspect to dominant immediately upon returning from the disabled list. He ended the season with a 29 percent strikeout rate, his walk rate dipped to just above 10 percent, he posted a 2.21 ERA, a 55 percent ground ball rate, and he didn’t give up another home run the rest of the way. He also displayed one of the nastiest sliders in baseball, prompting our Doug Thorburn to write this about the pitch last October:

Strop might be a relative unknown when compared to the other relief aces on this list, but his breaking ball was arguably the most dominant in baseball this season. The 63.3 percent rate of whiffs-per-swing was the highest mark in baseball for any individual pitch, and the slider was responsible for 58 of the 71 strikeouts that Strop registered in 2014.

Neil Ramirez arrived in late April and immediately impressed with his mid-90s heater. With the pedigree of a starter in the minors (a theme with the many of the youngsters in this Cubs bullpen), he was used cautiously because of previous shoulder issues. But he also had a swing-and-miss fastball and a pair of strong breaking balls—both weren't always crisp, but at least one seemed to be: A 30 percent K rate and 1.44 ERA resulted.

He probably earned a shot at closing, but was blocked by Hector Rondon, who took over the role Veras abandoned. A talented starting pitching prospect in the Indians organization before 2013, Rondon was slowed by a pair of elbow injuries and the Cubs took him in the Rule 5 draft. Without expectations of contention, they cleared space on the 25-man roster that year. He was used in a variety of roles, but watchful eyes noticed that his velocity jumped from 92 mph in April to 97 by by September 2013. He averaged 97 the entire 2014 season. His FIP was even better than his 2.42 ERA.

Finally, there's Justin Grimm, another former starter, who finally controlled his walk rate and issues practically no free passes in the final two months. The quartet of Rondon, Ramirez, Strop, and Grimm give the Cubs the only returning foursome in baseball that tossed at least 40 innings with a strikeout rate better than 24 percent last year. And they should have help, from Blake Parker (swell FIP, poor ERA) or from 27-year-old Cuban defector Armando Rivero (absurd PECOTA-projected strikeout rate) or from another converted minor-league starter like C.J. Edwards (who is already on the 40-man roster) or Corey Black.

It’s easy to look at the overall numbers from 2014 and assume the Cubs had your run-of-the-mill bullpen, but in doing so, you’d be overlooking the transformation that took place throughout the season. As the front office continues to pump young power arms through the system, converting starters into relief when it serves the club, it's the typically volatile bullpen that might provide the upstart Cubs some much-needed ballast.

You need to be logged in to comment. Login or Subscribe
jfranco77
There seems to be a theme here, though I'm not sure if it totally follows for the Cubs.

Team is bad... gets a lot of SP prospects from high picks and trades.

A lot of them fail as starters... but all of a sudden, voilÃ  - great bullpen!
Reply to jfranco77
terencem
That's a good point. The Royals successfully converted Duffy and re-converted Davis to the 'pen. Davis was great in his one season as a reliever for the Rays but the Royals tried him as a starter at first.
Reply to terencem
kcboomer
Duffy has started 56 of the 62 games he has appeared in so I don't think mentioning him is relevant.

The Cubs are counting on a bunch of real young guys to deliver and that is a crap shoot today. Analysts no longer can project guys in the high minors with particular accuracy. Even the best young AAA hitters just flame out in the bigs anymore. Hitters with proven minor league plate discipline seem to consistently fail against the major league uber-strike zone.

The odds are too many of the young Cubs pieces will fail this year to let them be a real contender.
Reply to kcboomer
paulallen
When exactly was the time when analysts could project guys in the high minors with particular accuracy?
Reply to paulallen
leh1935
Joe Maddon and his cohorts in the Cubs front office should never be underestimated. If, by mid-season they think they
have a chance to win or capture a wild care spot, they will acquire the necessary resources to make that a possibility.

They will not waste John Lester in the second half like the
A's did
Reply to leh1935
JobuNeedsARefill
Why no mention of Motte?
Reply to JobuNeedsARefill
lyricalkiller
You don't get credit for having barely-back-from-injury, velocity-down Jason Motte until he starts pitching well.
Reply to lyricalkiller