Reds considered, likely to pass on Dayan Viciedo
Power hitters can be hard to come by these days, so players who crank 21 homers and collect 46 total extra-base hits don’t often get released the following winter. Dayan Viciedo, who on January 12th agreed to terms with the White Sox on a $4.4 million salary for 2015, became a rare exception to that rule just 26 days later. Chicago ultimately decided to cut him loose and pocket most of the money, save for the $721,311 in termination pay that Viciedo is still owed.

That made Viciedo and his hard-to-find thump a late-winter free agent. Trouble is, besides punishing mistakes up in the strike zone 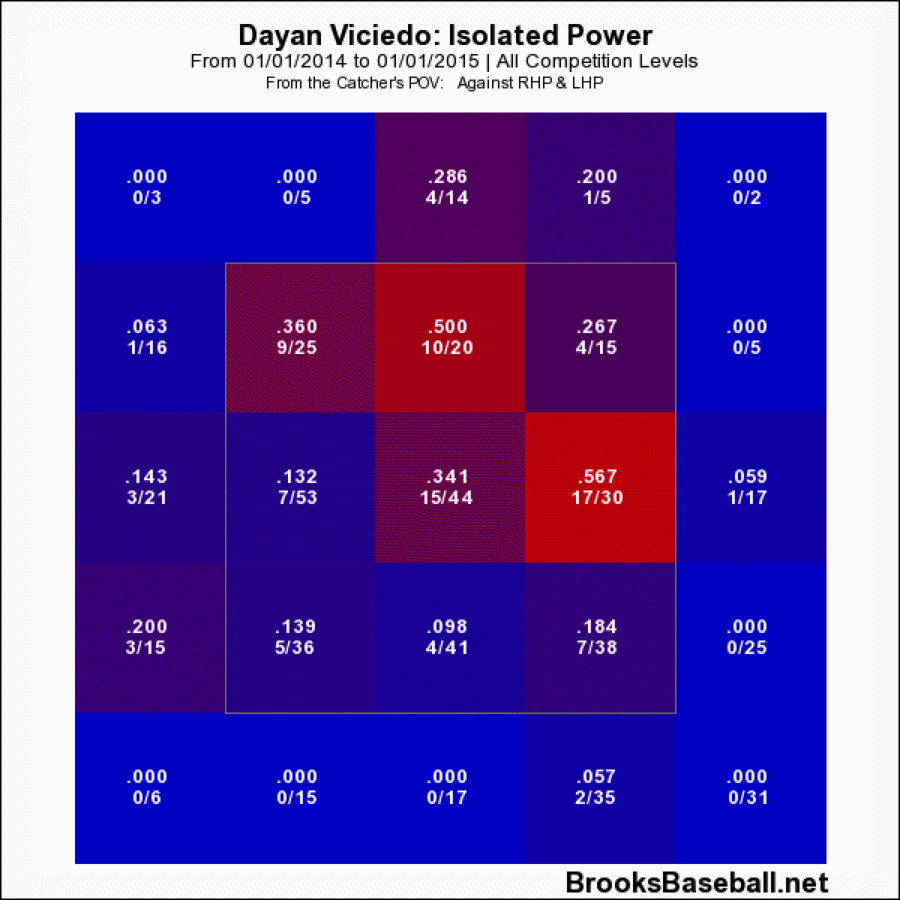 Viciedo has very few major-league-caliber skills. He’s a nice platoon bat against left-handers, but most of the value he provides in that capacity washes away if he’s forced to wear a mitt. The Cuban is a lawn ornament in the outfield and has only 15 big-league appearances at first base—though, to his credit, he’s yet to make an error at that spot. Suffice it to say that Viciedo would fit best with an American League club that needs a platoon DH.

The Reds don’t exactly fit that description, but Cincinnati Enquirer beat writer John Fay reported on Friday that they were mulling a pact with Viciedo anyway. GM Walt Jocketty has been busy of late, bringing Burke Badenhop and Kevin Gregg into his bullpen, but it doesn’t appear that he’ll further stock the bench.

Viciedo would have given manager Bryan Price an option to combat late-inning southpaws (.265 career TAv vs. LHP), and likely backed up Joey Votto at first base and seen occasional time in the outfield corners. But after announcing the signings of the aforementioned relievers, Jocketty told reporters that his roster is basically set for spring training.

With three years and 123 days of service time, Viciedo—who turns 26 on March 10th—would be under his next employer’s control for three years. However, barring a significant rebound, he’ll be a non-tender candidate again after 2015. Expect a handful of teams besides the Reds to phone Viciedo’s agent, Scott Boras, in the coming days.

Francisco Rodriguez on Marlins radar, but might head back to Milwaukee
Marlins GM Dan Jennings reportedly has some wiggle room left in his player budget. It might be too little to reel in James Shields, but there’s enough in the coffers for them to land the second-biggest name left in the free-agent waters if the Fish so desire.

MLB.com’s Joe Frisaro tweeted Sunday that Jennings is in contact with Scott Boras, who represents Francisco Rodriguez. Frisaro noted that the sides haven’t been in touch recently but that the door remains open for them to reconnect and come to terms.

Looking to shake off a homer-prone year with the Brewers, K-Rod could find much poorer home yards than the spacious Marlins Park. On the other hand, if he’s searching for save opportunities, those could be hard to come by in south Florida. Steve Cishek has performed well enough in the closer role for the Fish to keep that job even if a seasoned ninth-inning veteran enters the fold, so if Rodriguez is Miami-bound, he’ll have to settle for setup work.

That might lead Boras to exhaust other opportunities for Rodriguez, including returning to Milwaukee, according to CBS Sports’ Jon Heyman. The Brewers and Phillies are having trouble matching up on a deal involving Jonathan Papelbon, and re-signing Rodriguez may well be Doug Melvin’s Plan B in the late stages of the offseason.

Danny Espinosa is done batting left-handed
Earlier this offseason, there was word from Boston that Daniel Nava might give up switch-hitting and bat exclusively from his stronger side (lefty). We’ll have to wait and see if Nava goes through with that plan. In the meantime, we’ve learned that Nationals infielder Danny Espinosa has pulled the plug on his weaker swing.

For Espinosa, that’s his left-handed hack, which means that he’ll be a right-handed-only hitter beginning in 2015. GM Mike Rizzo delivered that news at a season-ticketholder event over the weekend, where, per Chris Johnson of MASN, he also quipped that Espinosa is “the most stubborn player I’ve ever met.”

The 27-year-old Espinosa was a productive player in 2011 (3.6 WARP) and 2012 (2.1), contributing on both sides of the ball. But he hasn’t been the same since tearing the rotator cuff in his left shoulder during the 2012 campaign and dealing with a fracture and subsequent inflammation in his wrist the subsequent year. Whether those injuries created problematic swing mechanics or amplified existing issues, the results—a .178 TAv in 2013 and a .234 mark in 2014—haven’t been pretty.

But a deeper dive reveals that Espinosa was a solid hitter versus southpaws last year, authoring a .301/.374/.485 slash line in 115 plate appearances compared to a lowly .183/.241/.291 showing against righties. Espinosa walked more often, struck out less often, and barreled the ball more consistently from the right side, though his .373 BABIP is likely to regress, narrowing the cavernous gap between his 2014 splits.

Still, it’s easy to see why Rizzo and the Nationals were finally able to convince Espinosa to junk his lefty swing. As our own Ryan Parker pointed out, the toughest adjustment for Espinosa might be figuring out how to hit right-handers’ breaking stuff:

Danny Espinosa is giving up switch hitting. Tough when he hasn't seen a breaking ball break away from him in 10 years.

Meanwhile, Washington may now have a glut of righty-batting infielders. All four starters—including newly acquired second baseman Yunel Escobar—hit from that side, as do fellow backups Kevin Frandsen and Tyler Moore, though the latter only plays first base. In fact, the lone non-righty-only infielder on the 40-man roster is Wilmer Difo, a switch-hitter who spent 2014 with Low-A Hagerstown.

Assuming the roster is set, the lefty-batting reserves on Matt Williams’ bench will have to come from other positions. Fourth outfielder Nate McLouth and switch-hitting backup catcher Jose Lobaton figure to fill those roles.