Signed LHP Wade Miley to a three-year extension worth $19.25 million with a club option for a fourth year worth an additional $12 million. [2/5]

You know those TA when a better-than-average player signs an extension with minimal long-term impact? The ones where we sprinkle in a concept derived from Wall Street and/or Las Vegas along with a bad joke or two—Wall Street and Las Vegas? Same thing. Baow!—then shrug our shoulders because we can't be certain the team likes the player more than it likes saving a little cash? This is one of those deals. Everything and everyone is fine, from Miley to the deal and back.

Jon Daniels adds two veteran outfielders who could come together as one to fill Texas' left-field void.

Schierholtz started last season as an obvious trade chit, one certain to end the year in a city other than Chicago. Sure enough, that came to pass. But not because he built upon a breakout 2013. Rather, because he became a lost cause, hitting just .192/.240/.300 in 99 games. He later had a 23-game stint with the Nationals, in which he improved his line by posting a .637 OPS. Ouch. The Rangers are hoping Schierholtz gets back to his old form, when he was an average or better hitter versus righties who could contribute across the triple-slash categories. Should he do so, he could man left most days.

One of Schierholtz's potential dance partners, Ludwick, finished last season as a league-average hitter thanks to his .291 True Average against southpaws. He remains the same free-swinging, strikeout-prone outfielder he's always been, but there are some warning signs that he's nearing the end. Consider the image below, which shows Ludwick's ISO by zone against left-handed pitchers. If there is such a thing as the visual representation of a mistake hitter, then this it: 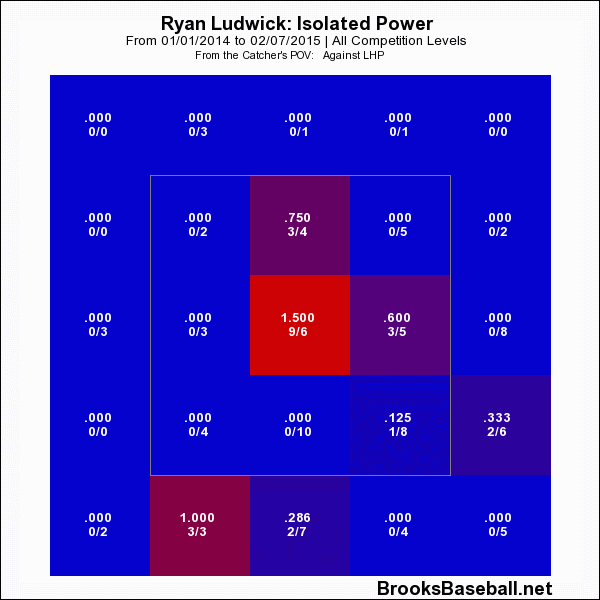 Ludwick's dependency on mistakes portends that the end is near. Whether the expiration date comes sometime in summer 2015, or not until 2016 is anyone's guess. The Rangers do have a few alternatives should either or both guys fail. Yet it's hard to feel optimistic about the situation, seeing as how those options weren't good enough to preclude these deals.

Acquired LHP Jayson Aquino from the Rockies in exchange for LHP Tyler Ybarra. [2/4]

Can a challenge trade qualify as boring? You'd think not, but the Jays and Rockies proved otherwise with this dozy doozie. Designated last week, Aquino is the younger of the two players involved. He's (predictably) behind on the developmental curve, having felt up a Double-A baseball for the first time late last season. Because Aquino boasts an odd profile—he commands his solid fastball and changeup, yet lacks a suitable breaking ball—odds are he's bound for the bullpen. The Jays could hasten the inevitable transition, likely with an eye on him contributing to the big-league squad this season. Alternatively, and this seems more likely given Aquino's option status, the Blue Jays could keep him in the minors as rotation depth. Toronto loses a Y either way.

Signed RHP Burke Badenhop to a one-year deal worth $1 million with a mutual option worth $4 million; designated LHP Ismael Guillon for assignment. [2/7]

All Badenhop does is get outs and change teams. (The Reds are his fifth in five seasons, for those keeping track.) He might resemble a right-handed specialist—what with a closed landing, low three-quarters arm slot, and long action in the back—but in 2014 he was equally good against each hand, all the while setting a new career-best in groundball rate (62 percent). Badenhop isn't going to blow anyone away with his raw stuff (he has a quality low-90s sinker, a late-dipping change, and a slider) but he's a consistent, durable middle reliever whose awkward pacing between pitches should make him a cult favorite in Cincinnati.

Guillon remains a project. His fastball-changeup combination could pique another team's interest if he hits waivers.

As neat as it is to see a former 43rd rounder swapped straight-up for another organization's one-time top-10 prospect, that's about the only reason to call the in-laws about Ybarra. His quality stuff (plus fastball, average breaker) is undercut by poor command, leaving him closer to up-and-down status than anything else. Those locational issues are mechanical in cause, stemming from a high-effort delivery that's burdensome to his arm. Seeing as how Ybarra is 25 and has been passed over in multiple Rule 5 drafts, there's not much optimism for sizable improvement. He'll probably see time in Coors anyway.

For the second winter in a row, Perez serves as a team's cheap upside play. It's hard to believe he's only a few seasons removed from consecutive all-star bids, though his game offers some reminders. His fastball remains hot, his slider quality, and his arm action shorter than a paddle-ball player. (He tried adding a changeup as a new wrinkle last season, but its usability bordered on nil.) If Perez can start throwing strikes again, his next contract should be of the guaranteed variety. Shy of that, we'll be back here with the same intro and caveats in a year's time.

Villanueva has spent seven of his nine seasons in the big leagues as a member of the NL Central. He'll hope to make it eight of 10 in the coming weeks. If he does, it'll be due to his rubber arm, control, and lack of a platoon split. (His mustache is too good to mention with such trivial attributes.) Finding a spot for Villanueva in the Cardinals' projected bullpen is a tough assignment. Best guess: One of the lefties (Randy Choate, Kevin Siegrist, or Sam Freeman) would lose his.