The last time Jordan Zimmermann faced Christian Yelich, Steven Souza became famous. The 17 other times they met in 2014 proved less prosperous for backup outfielders (and search-engine optimizers), but were kind to Zimmermann in another way. While Zimmermann didn't shut Yelich down (though he held him to an OPS 40 points below his seasonal norm), he accomplished a feat nearly as noteworthy: He caused Yelich to pull the ball seven times. That's more than anyone else managed last season.

Big whoop, right? Except coercing Yelich to hit the ball to right field is tougher than it seems. No qualified batter pulled a lower percentage of hits last season than Yelich did, and you don't have to stretch far to compare his approach to a young Derek Jeter. Both inside-outed pitches across the plate and possessed hands fast enough to turn and burn on weak and poorly located jamming attempts. It reasons then that the goal with Yelich is identical to the goal against Jeter: make him pull the ball when he'd rather not. Sure enough, last season's numbers vet that approach, as Yelich posted a .667 OPS on balls to right field, .897 to center, and 1.091 to left.

Since Zimmermann has mastered the method that others have failed to grasp, it's natural to think he must have a superior game plan, or perhaps insight to Yelich that others lack. So what is it and what can we learn from it?

You've probably conjured some hypotheses by now, some of which you feel confident could be the "correct" explanation for Zimmermann's relative dominance. If so, you've performed a similar analysis to the one Zimmermann does whenever Yelich steps to the dish. The big difference is, unlike Zimmermann, you have no recall of past trials; no foundation to build upon. Let's change that, and test your processes, by playing a game.

No, you won't be lobbing baseballs toward Yelich a la Zimmermann—the Marlins wouldn't sign off on that. Instead you'll be looking at screen captures of the decisive pitches from the 16 plate appearances between the two that didn't end in a K or popularity boom. To win this game, all you have to do is pick the seven that resulted in a pulled ball. It doesn't matter if Yelich notched a hit, nor if the ball escaped the infield; just pick the seven pitches that journeyed toward right field.

To add another layer of realism, we've included general information about the pitch type, count, and previous sequence. This should be easy, right? Give it a go, then check the bottom for answers: 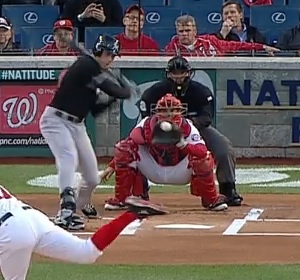 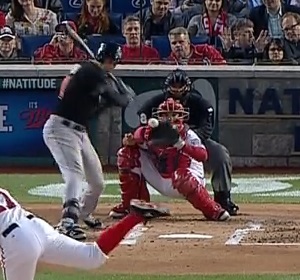 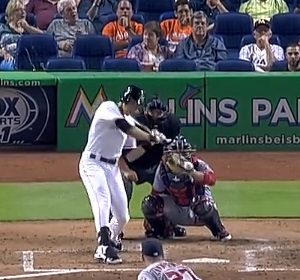 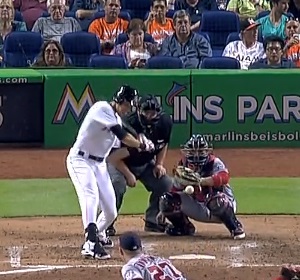 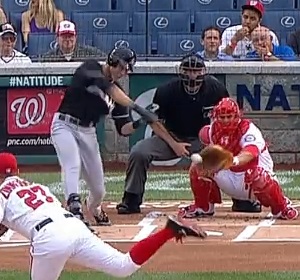 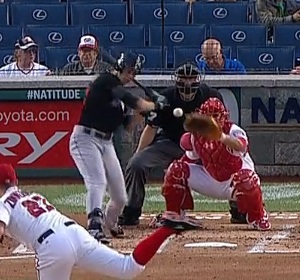 Previous pitches: Fastball up and in, changeup over the plate 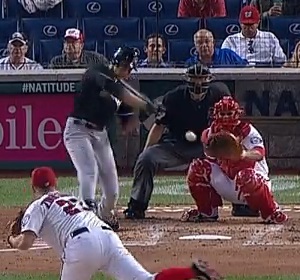 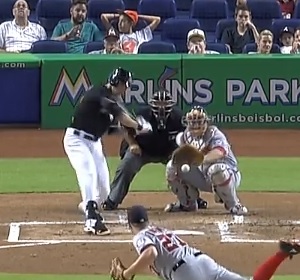 Previous pitch: Fastball over the plate 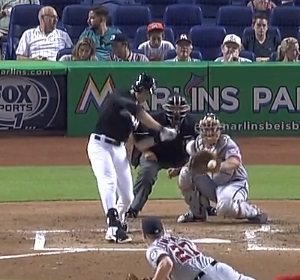 Previous pitches: Fastball away, fastball up and away, changeup low 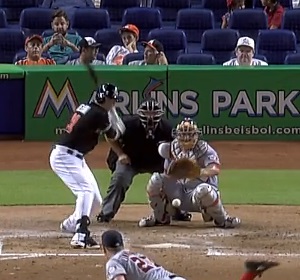 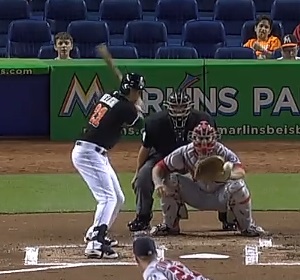 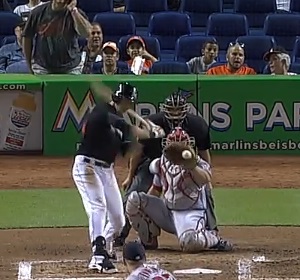 Previous pitch: Fastball up and in, fastball up, fastball way inside, curveball way outside 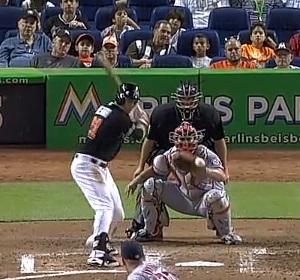 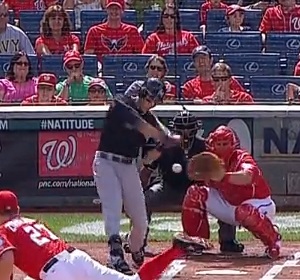 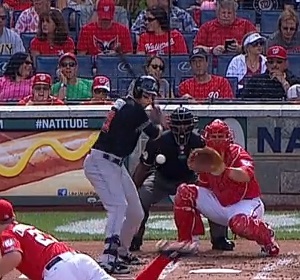 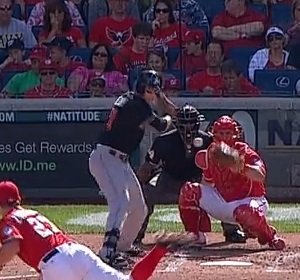 The beauty of this game—our little one here, but baseball too—is freedom of choice. There were a number of defensible strategies to employ: picking all offspeed pitches, thinking Yelich would be out in front; avoiding pitches on the outside corner like references to the plague; examining sequences for repeated patterns; guessing; and so on. There was no wrong approach. However that flexibility doesn't mean you arrived at the right answers, or that you discovered Zimmermann's secret—or, for those getting suspicious, that there was even a secret to uncover.

That's right, Zimmermann didn't have a secret against Yelich; heck, Zimmermann all but pitched Yelich as though he were just another guy.

Without getting too granular, there were no obvious discrepancies in Zimmermann's game when he faced Yelich versus all left-handed hitters. Sure, Zimmermann pounded Yelich with heat to the tune of 77 percent fastballs, yet last season he threw that same percentage against all lefties. Even the location of Zimmermann's pitches were fairly common, as he worked his running fastball over the plate-away for the most part, occasionally visiting up-and-in for effect:

The only party involved who found this approach unusual was … well, Yelich. Despite the blue area in the above chart, pitchers located their fastballs high and tight less often against Yelich last season than within in any other strike-zone box: 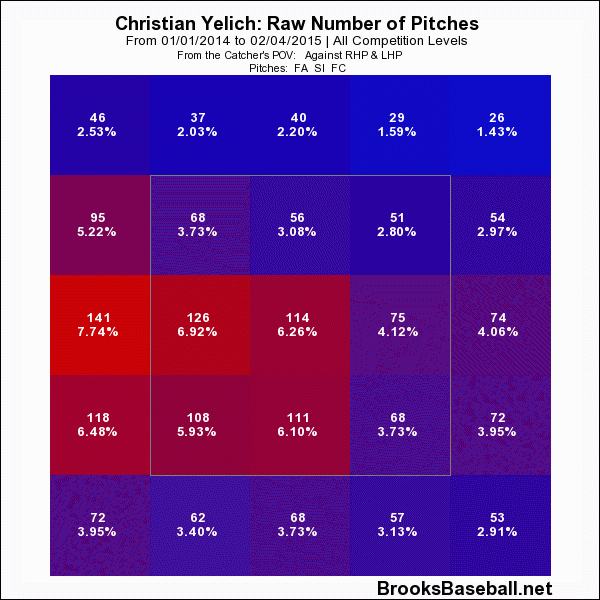 It would seem then that Zimmermann's "smart" approach stemmed from what amounts to stubbornness. He didn't plot a master plan using heat maps, scouting reports, or video; he just did what he always did, using his best pitch in his best spot over and over. Why? Because that's what always worked, and that's what continued to work against Yelich. Truthfully, the only reason Zimmermann's approach versus Yelich feigned a sophisticated appearance hinged on results borne from a coincidence—Zimmermann's strengths and tendencies overlapping with Yelich's weaknesses. To ascribe greater intent to Zimmermann's choices would be to overthink the process or pervert it to fit our narrative.

But there's another question worth asking, if Zimmermann stumbled onto the answer of how to "beat" Yelich, then why haven't others copied him?

Presumably for the reasons you'd think. Not everyone has Zimmermann's stuff or command, not to mention his confidence that he won't miss over the plate. Plus pitchers know—even Zimmermann, whose inside fastballs were on occasion shot down the left-field line by Yelich—the best sequences and locations don't always breed the desired results; especially if they become overused, since the perceived warp and woof of sequencing is unpredictability.

Which is why one of the new Hilbert Problem-style questions posed by Dan Turkenkopf in Extra Innings ("What is the most effective way to sequence pitches?") is likely to go unanswered. It doesn't help our odds that Turkenkopf wasn't after a backward-looking model. He wanted something that informed choices rather than explained them. Some three years (and a few valiant efforts) after Turkenkopf asked his question, we still don't have a worthwhile response.

The truth is, we probably never will. Zimmermann's efforts against Yelich give you a good idea of why. There are too many variables locked away in strangers' minds, the world's finest black boxes, to know when we're looking at a bigger plan than throwing your best pitches over and over. If "Jaws" taught us anything, it's that you need to be certain you caught the right shark—or the left shark, as the kids say these days—and we'll never be sure we can make the distinction.

Maybe we shouldn't feel too bad about that, though, because the pitchers don't seem to have all the answers, either—even in cases like Zimmermann-Yelich, where the results and approach suggest otherwise.

You need to be logged in to comment. Login or Subscribe
rawagman
The reason why we'll never solve that particular Hilbert question is because there is no answer. The *best* sequence for a particular plate appearance will only be best for that PA. To continue using it would be to telegraph your intent as a pitcher and thereby lose the effectiveness of that plan.
Reply to rawagman