In the countryside of Ireland there is a mound—constructed by an ancient people during the new stone age roughly 5,000 years ago—that served as a site of great religious, astrological, and ceremonial importance. During the Winter Solstice every year, the central passageway of the earthen mound at Newgrange is illuminated for 17 short minutes as the sun rises. For those 1,020 seconds Earth and sun are perfectly aligned, allowing this marvel of ancient engineering to transpire. While the ancients were building the mound, any number of things could have gone wrong and obstructed the sunlight as it broke the horizon during the Winter Solstice. As it happens though, things aligned perfectly and an architectural marvel was built.

Breakouts are a funny thing. In order for a player to enjoy a breakout season, dozens of factors needs to align in their favor. This is why seasons like Corey Kluber’s are, like the rays of sunlight down an ancient passageway, exceedingly uncommon. Everybody wants to know who this year’s Corey Kluber will be, but the short answer is that there won’t be one—Kluber’s was the first of its kind* since Cliff Lee’s 2008 Cy Young award winning season. That’s not to say we can’t look at some potential breakout candidates to see if there might be a breakout candidate lurking.

*You could argue that R.A. Dickey’s 2012 campaign was a similar breakout, but he posted solid seasons the two prior years. Of course Kluber’s 2.0 WARP in 2013 wasn’t exactly the replacement level performance that Lee had in 2007, so maybe he isn’t even a proper heir to Lee’s much discussed turnaround.

PECOTA conveniently provides one starting piece that can be used to identify potential pitcher breakouts. In fact, one output dimension from PECOTA details how likely each player is to have a breakout season in the coming year. For PECOTA’s purposes, a breakout is defined as a player who outperforms his projection by 20 percent or more. So we’re looking at guys who could make significant statistical jumps in 2015.

PECOTA, of course, incorporates each player’s statistics and the careers of similar players, but it doesn’t look at PITCHf/x data. By cross-referencing PECOTA’s breakout projections against PITCHf/x analysis, we can see if there are underlying nuances that might make a breakout more or less likely for a given pitcher. Our goal here is to see how this might play out, by using PECOTA’s no. 1 breakout candidate.

That would be Brewers’ flamethrower Wily Peralta. At first glance, this seems to pass the sniff test. The 26-year-old is in the middle of his theoretical prime, and his 96 mph fastball puts him in the 95th percentile for fastball velocity among starting pitchers. A starter who throws 96 mph but doesn’t post great overall numbers will never not be a breakout candidate, if those were the only two things you knew about the pitcher in question. Not only does Peralta throw really hard, but he has also shown some modest improvement in walk rates over the past two seasons, which is of course promising. And last year was a breakout of sorts for him, as he nearly topped 200 innings while posting an ERA better than the league average.

Still, Peralta’s 2014 was a tier or two below the All-Stars and the Cy Young candidates, so there’s room for improvement. Meanwhile, there’s also this:

That’s PECOTA’s mean projection for him in 2015. That’s right: A guy PECOTA says will be worth exactly nothing next year also happens to have PECOTA’s boldest “breakout” stamp. That’s because, though there are plenty of statistical ugly spots in Peralta's recent past, his list of comparables included a lot of breakouts. Here are the top 20 comparables for Peralta’s 2015 season, to give an idea of what kind of crowd PECOTA believes he would hang out with:

The two leftmost columns are the comparable player and season used for Peralta’s 2015 season. COMP RA shows the runs allowed (actual runs allowed, per nine innings) during that season for the player included in the comparison, while the SCORE is how comparable the pitcher in question is to Peralta. BASELINE RA shows the player’s projected FRA prior to that season. Finally, Breakout? indicates whether or not the pitcher had a Breakout season per PECOTA, and the Improvement % column indicates the actual percentage improvement the pitcher had over the prior year. Just to reiterate for clarity: A breakout is defined as allowing 20 percent fewer runs than one's baseline projection.

Twelve of the top 20 comps for Peralta’s 2015 season enjoyed breakout years. Going further down his list, we’d find that 42 of his top 100 comps had breakout years, which is pretty remarkable. Breakout likelihood is weighted by similarity scores, and when that all shakes out Peralta has (by PECOTA’s reckoning) a 45 percent chance at a breakout.

Among those comparables, a few names stand out. Ivan Nova and Wade Davis—Peralta’s top two comps—had terrific seasons, each improving by more than 40 percent. While Dana Eveland was a big swing and miss, Ricky Romero also enjoyed a breakout, even though he couldn’t make his stick. Peralta is a few years too early on the Jake Arrieta train here, but Alex Cobb had a very nice breakout season last year, and he has a comp score of 90 for Peralta’s 2015 season. Peralta’s top 20 comps are an interesting list of guys who by and large have had relatively successful major-league careers.

So PECOTA thinks that Wily Peralta might be due for a breakout season, and for good reason. The larger question is, would a PITCHf/x-based analysis agree that Peralta is primed for a breakout this coming season?

There’s one major problem that undermines Peralta’s breakout potential. He doesn’t have enough differentiation between his pitches. Let’s first consider the movement of the pitches in question: 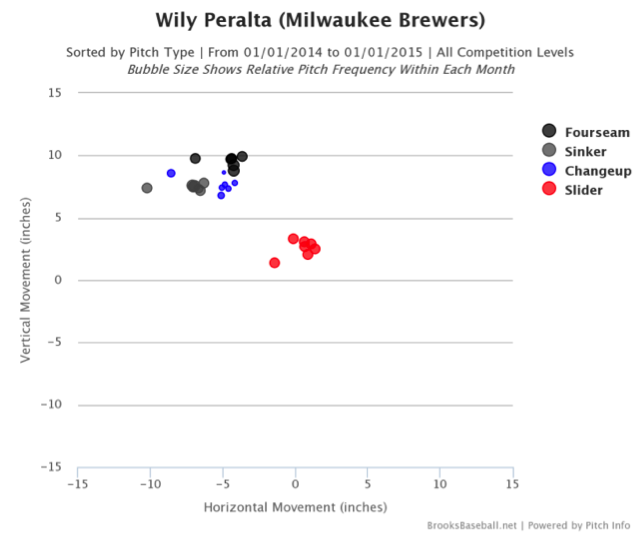 Three of Peralta’s four pitches have almost the same movement profile; 70 percent of the pitches he threw in 2014 were clumped in a narrow movement band—little drop with around five inches of arm-side run. The slider is the only pitch with a different movement profile, but even that pitch doesn’t have as much movement as you’d expect to see from a put-away slider. Ideally there’d be a larger spread among the various pitches to give opposing hitters a different look.

The four-seamer and the sinker look largely the same. In fact, among pitchers who threw at least 200 of each pitch last season, Peralta’s total movement difference of 3.2 inches would rank 70th out of 79 starters. For some context, 3.2 inches is roughly the diameter of a baseball. The pitchers with the most variation on their fastballs get double that or more: Justin Masterson, Marcus Stroman, and Odrisamer Despaigne all put more than 6.5 inches

What about the difference between his fastball and slider? Peralta ranks 63rd among 72 qualified starters for the difference between his fastball and slider, with just 8.3 inches of movement differential. The top pitcher, Yu Darvish, has more than double the movement differential of Peralta. The idea here is that when a pitch is released, the opposing hitter has an expectation of where that pitch should end up. By imparting spin on the ball, the pitcher can manipulate the movement the pitch has and, consequently, its end location in (or out of) the zone. For Peralta, the hitter has a very small window to adjust within, because his pitches just don’t move in significantly different ways. If batters are used to juggling a tennis ball, a tennis shoe and a tennis racquet, Peralta makes it easier: Three tennis balls.

Comparing Peralta to one of his primary comparable players helps put this in better context. The 2012 version of Tyson Ross featured a pitch arsenal very similar to that of Peralta in 2014. The difference between Ross’ 2012 four-seam fastball and his sinker showed a movement differential that was 37 percent larger than Peralta’s combination. The fastball to changeup differential also goes in Ross’ favor, this time by a whopping 169 percent. Finally Ross’ FA-SL combination had a 20 percent larger differential than Peralta’s 2014 versions of the same pitches. The image below shows the difference between Tyson Ross pre-breakout and Wily Peralta in 2014:

The orange box highlights the total movement area of each pitch released by either. The biggest difference is that the sinker and changeup from Ross have more vertical drop, which greatly expanding his total area. Additionally, the majority of Ross’ sliders actually had glove-side movement, whereas Peralta’s end up with little to no horizontal movement, which again constricts the area where a pitch can end up once Peralta has released it.

PECOTA believes that, based on his comps, Wily Peralta could be primed for a breakout in 2015. PITCHf/x, however, gives a few reasons that one should be skeptical. Granted, there are clear areas of improvement that could, if addressed properly, catapult Peralta into solid no. 2 status next season. Maybe a simple grip change would remedy things. Maybe he thrives just as he is. Life’s unpredictable, pitchers far more-so.

Realistically though, it doesn’t seem highly likely that Peralta will be able to make the big jump from the 170s into the top 40 next season. And honestly, that shouldn’t really be that shocking. If breakouts were easy, there would be a lot more Corey Klubers, Cliff Lees, and R.A. Dickeys, and if they were easy to spot we wouldn’t have been so shocked by Corey Kluber, Cliff Lee and R.A. Dickey. For better or worse, that’s why seasons like Kluber’s can truly be cherished. After all, it’s the 364 days of waiting that make those 17 minutes of sunlight so special.

that would be a WARP improvement of 2.2. According to the PFM the would rank him as a top 35 pitcher.
Reply to ares1800jr
BSLJeffLong
Cingrani is interesting too! He's T-9 for Breakout and T-26 for Improvement per PECOTA (whereas Peralta is #1 for both). That said, I'd much rather have Cingrani's 2015 line per PECOTA than Peralta's!
Reply to BSLJeffLong
carterliebzeit
This was cool. Great article Jeff
Reply to carterliebzeit
randolph3030
I second this. Really interesting article, Jeff.
Reply to randolph3030
WaldoInSC
The Pitchf/x information doesn't contradict the possibility of a breakout; it simply explains why Peralta hasn't dominated with 96mph heat in the past.

The whole point of breakouts is that they do something different than they were doing before -- learn a new pitch, reduce their walk rate, figure something out, etc. If Peralta improves his differentiation good things might happen.

Of course, we should be skeptical, not because of Pitchf/x but for the very reason you elucidate to end your piece: breakouts are not the way to bet.
Reply to WaldoInSC
BSLJeffLong
This is a good (if semantic) point. Breakouts are the result of an alteration to approach or arsenal in some fashion, which means that this data doesn't preclude Peralta from breaking out in 2015, as you point out.

I think that's what I was trying to get at (in a roundabout way) with the comparison to Ross' arsenal and the changes he made from year 1 to year 2 (breakout). I just wasn't as direct about that as I maybe should have been.

I suppose a more appropriate conclusion would be that without changing the things outlined above, Peralta won't have a breakout season.

Thanks for the very insightful comment!
Reply to BSLJeffLong
fairacres
Why are hitter breakout percentages so much lower than pitcher breakout percentages? Are pitchers' year to year performances THAT much more variable than hitters'?
Reply to fairacres
lmarighi
My guess would be that it's a lot easier to learn a new pitch, or move on the rubber, than it is to radically improve a swing, or strike zone judgement.
Reply to lmarighi