Papelbon-to-Milwaukee trade falls through
This offseason has signaled the start of a rebuild for the Phillies, who have gotten younger by trading away Jimmy Rollins and Marlon Byrd for prospects. While Cole Hamels trade talks have stalled due to the high bar Ruben Amaro has set for a return package, the discussion of flipping Hamels for younger talent is at least being had and is likely to gain momentum around the trade deadline. The next logical piece to be moved would be Jonathan Papelbon, who has popped up in several trade rumors for over a year—most recently on Thursday night when Jeff Passan of Yahoo! reported that the Brewers were in serious discussions to acquire the closer from the Phillies.

However, trade talks hit a snag over the weekend according to Tom Haudricourt of the Milwaukee Journal-Sentinel, who writes that the two clubs have not even engaged in any talks regarding Papelbon since Thursday. Haudricourt writes that the Brewers want the Phillies to sweeten the pot financially in any potential deal for Papelbon, who is owed $13 million next season and reportedly would require any team on his no-trade list (which includes Milwaukee) to guarantee his $13 million vesting option for 2016.

It’s no secret that Papelbon’s velocity has been in steep decline in recent seasons and his miniscule 2.04 ERA last season was largely driven by a BABIP that was 30 points below his career average and an unsustainable HR/FB rate. With reduced fastball velocity, Papelbon now misses fewer bats than he did during his days with Boston but there is still reason to remain optimistic about his future. Even with a 92 mph fastball, Papelbon remains on the shortlist of relievers who can boast elite control while striking out batters at an above-average clip, and as Jeff Sullivan wrote over the weekend, Papelbon has shown a willingness to adjust his pitch selection to combat his declining fastball velocity.

Papelbon may no longer an elite reliever, but he’s still an upgrade over what’s left on the free agent market. However, given the financial cost and potential prospects required to swing a deal for Papelbon, there’s little incentive for a team to go down that route with Francisco Rodriguez, Rafael Soriano and Casey Janssen all still available for relatively cheap. Each reliever comes with his flaws: Rodriguez has been plagued in recent seasons by progressively worrisome longball issues, Janssen is coming off an age-32 season in which his strikeout rate collapsed; and Soriano’s stock fell significantly after his second-half implosion last season. However, each of them have a track record of being adequate relief options and are going to remain more cost-efficient options than Papelbon if the Phillies aren’t willing to kick back a significant amount of cash in a potential trade. For the Brewers, the most likely alternative to Papelbon appears to be Rodriguez; Rodriguez has publicly said that he’d like to re-sign with the Brewers and Hardicourt reported on Sunday that owner Mark Attansio has had conversations with Scott Boras about bringing his client back to Milwaukee.

The Brewers may also be in less of a rush to pay a steep price for bullpen help if they’re encouraged enough by the progress that Jim Henderson and Tyler Thornburg make during their rehabs in the coming months. Andrew Gruman of FOX Sports Wisconsin tweeted over the weekend that Thornburg, who elected for PRP therapy instead of Tommy John surgery to repair his torn UCL, is already throwing bullpens and appears to be ahead of schedule in his rehab. As for Henderson, who was limited to just 11 1/3 innings last season due to shoulder problems, Adam McCalvy of MLB.com reports that he’ll throw his first bullpen session in the coming week and is hoping to be ready for opening day.

With Luis Valbuena now in the fold, Dominguez will have to prove to the coaching staff during spring training that he’s closer to his 2013 self than his 2014 version if he wants to get regular playing time at the hot corner. Reports are that Dominguez is still in the running to be the everyday third baseman, but Evan Drellich of the Houston Chronicle writes that manager A.J. Hinch has asked Dominguez to put in an order for a first-base mitt, just in case.

The only problem for Dominguez is that there is already a logjam at first base in Houston. There’s already barely enough room for Chris Carter, Jon Singleton and Evan Gattis to split between first base and designated hitter, although Dominguez would presumably stand out amongst that trio as the best defensive option if given the time to learn the position.

Dominguez is actually one of the few Astros who isn’t a big swing-and-miss guy but one of the areas that he struggled at last season was catching up to velocity, particularly in the zone. In fact, his swing-and-miss rate at four-seam fastballs in the strike zone doubled from 6.9 percent in 2013… 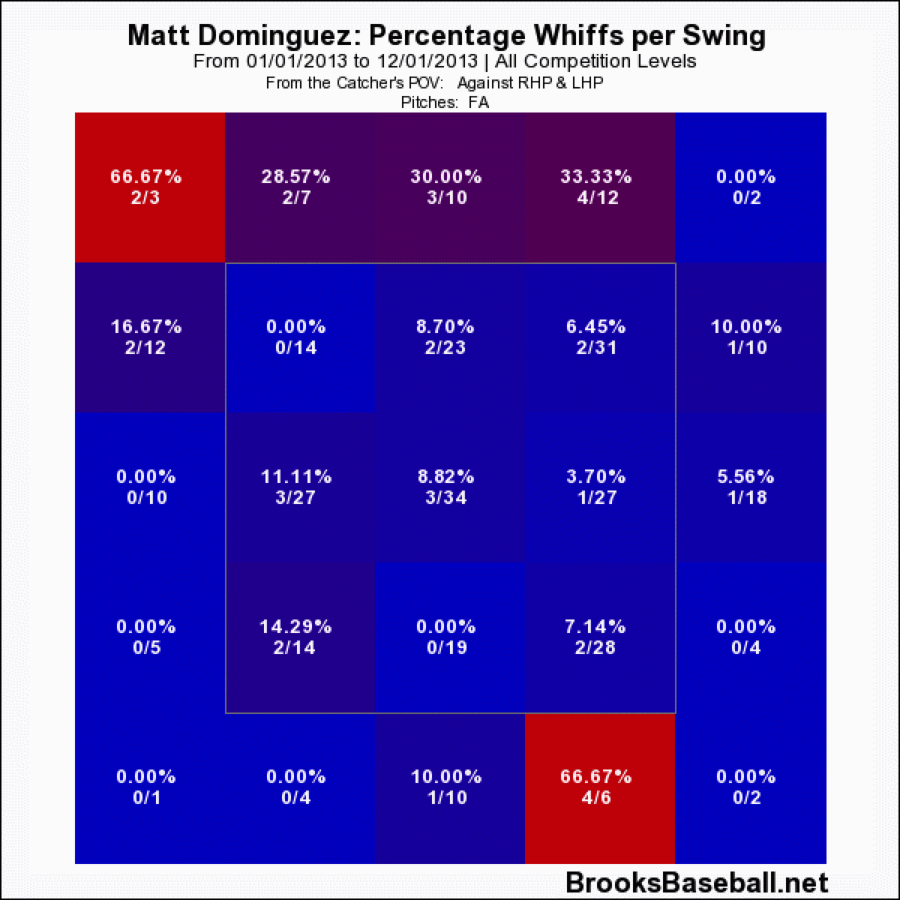 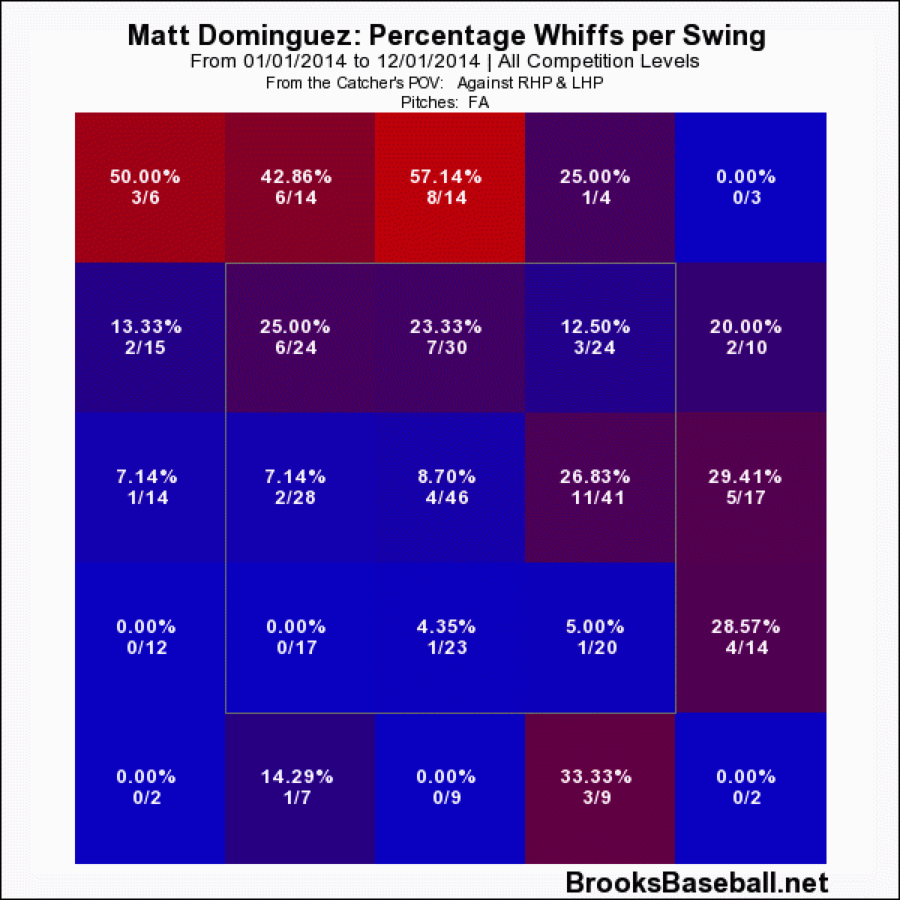 The Astros actually have an alternative option to Dominguez this season and won’t be shelling out 600 plate appearances to him again if his OBP is dwelling in the sub-.260 range. If his offensive numbers don’t bounce back to respectable levels in the early going, it likely won’t matter how defensively versatile he actually is.