Do the Tigers “Have to Have” Max Scherzer?
On Friday, a team official told Tony Paul of the Detroit News that finding a way to re-sign the right-hander is a must. We don’t know if that’s the prevailing viewpoint within the front office, but Paul’s tweet indicates that at least one decision-maker feels that Scherzer must be retained at all costs.

The Tigers’ 2015 rotation would consist of David Price, Justin Verlander, Anibal Sanchez, and the newly acquired Shane Greene and Alfredo Simon if Scherzer goes elsewhere. Simply moving forward with that starting five should keep the Tigers afloat as division contenders and leave general manager Dave Dombrowski with the financial wiggle room to make a mid-season move if necessary. But the 30-year-old Scherzer logged 220 1/3 innings as Detroit’s de facto ace in 2014—compiling a career-high 5.0 WARP while earning $15.5 million in his final year of arbitration eligibility—and losing him after trading Rick Porcello to Boston would be difficult to swallow.

Justin Verlander was worth only 2.9 WARP in 2014, his lowest output since 2008. David Price, for whom the Tigers traded their everyday center fielder and one of their top position prospects, is a free agent after the 2015 season. Anibal Sanchez, who emerged as a stalwart in 2013, just as Verlander was beginning to show signs of decay, has a litany of injuries on his medical chart, including multiple bouts with shoulder inflammation since surgery to repair a torn labrum in 2008. Put those three concerns together, and it’s to easy how Detroit’s house of cards could come crashing down in a year if Scherzer bolts.

The trouble is that Scherzer’s agent knows that, too, and no agent is better at twisting a desperate owner’s arm than Scott Boras. After the Royals snuck through the American League playoffs to win the pennant and the White Sox spent the offseason loading up for a return to the postseason, Dombrowski and owner Mike Ilitch likely feel their championship window closing more rapidly than ever before. Forking over $200-plus million to Scherzer could nudge it back open, at least delaying the inevitable rebuilding phase that the 85-year-old Ilitch can only hope comes with one more ring on his finger.

Is another pennant run or two on the front end worth a commitment of that magnitude and risk? We know how one front-office member feels.

Diamondbacks trying to trade for catcher—maybe Welington Castillo
There’s not much in the way of catcher talent in the desert at the moment, either in terms of quantity or quality. General manager Dave Stewart has just two backstops on his 40-man roster: former backup Tuffy Gosewisch and Rule 5 draft selection Oscar Hernandez, who had a .701 OPS last year—for Bowling Green, the Rays’ Low-A affiliate.

Suffice it to say that obtaining another catcher between now and February 19th, when he’d be required to report for spring training, would be a good idea. But Stewart told reporters, including Nick Piecoro of the Arizona Republic, that he’s in no hurry to part with coveted prospects to fill the glaring need.

In fact, Stewart created the problem less than a month ago by unloading Miguel Montero on the Cubs. The primary appeal of that trade was unloading the 31-year-old’s contract; he’s owed $40 million between now and 2017, a hefty sum for a player who hasn’t eclipsed 1.8 WARP since 2012. But the Diamondbacks exported Montero and failed to import the seemingly displaced ex-Cubs starter Welington Castillo, to whom Chicago opted to cling at the time. Castillo’s role with the Cubs became even murkier when they signed David Ross, in part to appease Jon Lester.

Logic dictates that Castillo will, eventually, find his way out of the Windy City, and the D’backs are the most obvious suitor. A 27-year-old who’s delivered between 2.3-2.5 WARP in each of the past two years, Castillo is entering his first year of arbitration and is controllable through 2017. He might actually be an upgrade over Montero, though Stewart’s reluctance to move prospects could stand in the way of a deal.

Piecoro also mentioned Dioner Navarro, who became an expensive ($5 million) backup when the Blue Jays inked Russell Martin, as a possible target for the Snakes.

Widespread interest in Carlos Peguero (yes, really)
Light-tower power is hard to find these days. Carlos Peguero has it. And, according to Peter Gammons, that attribute alone is enough for a host of teams to look past Peguero’s warts: namely, a .196/.245/.379 batting line and 11-to-89 BB:K ratio in 229 major-league plate appearances.

Peguero turns 28 on February 22nd, but Gammons tweeted that watching him makes evaluators reminisce about Wily Mo Pena’s mammoth batting-practice bombs. Incidentally, Peguero and Pena both spent time with the Mariners in 2011, the latter’s most recent year in the majors before he headed off to Japan. 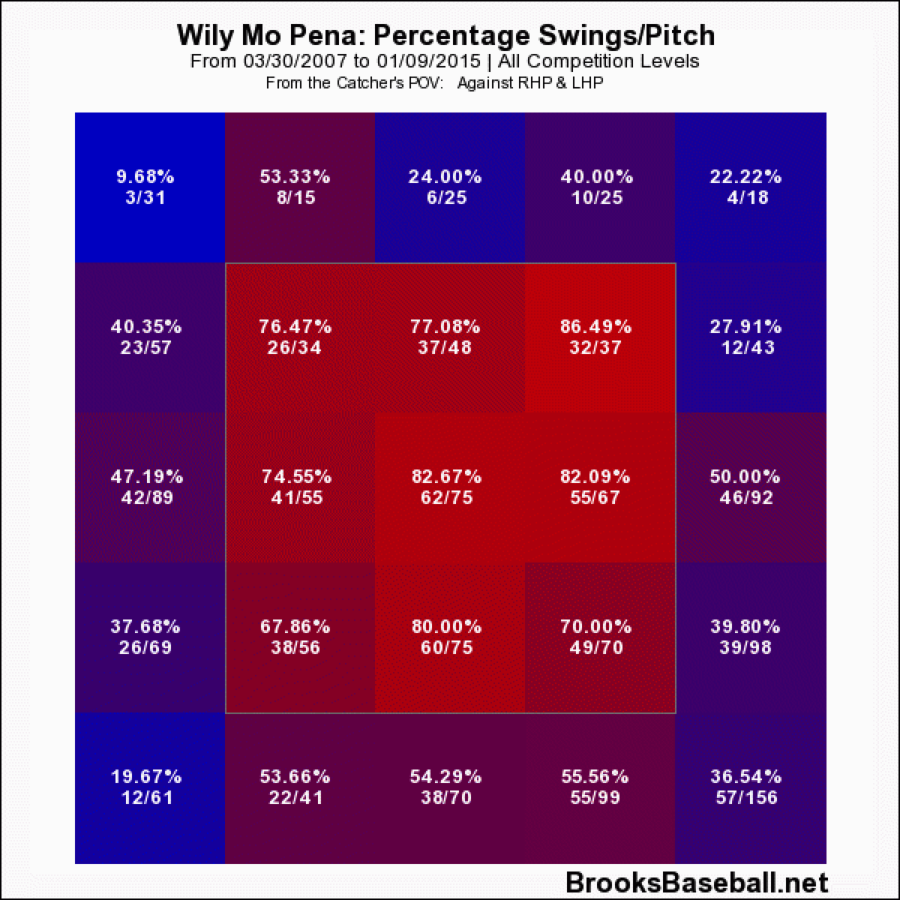 There weren’t many strikes that didn't tickle his fancy, and breaking stuff in the dirt tempted him far too often for his own good. Peguero can sympathize: 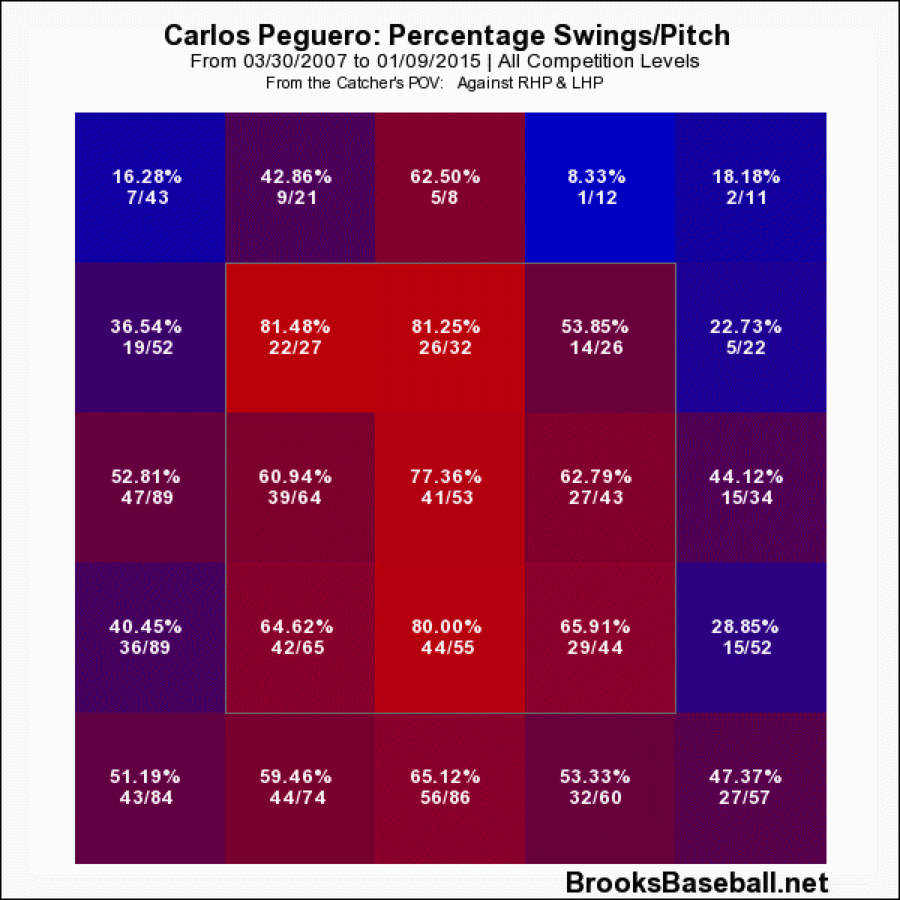 He’s even less choosy. Which explains why he’s punched out more than eight times for every walk in the majors, and why the Royals decided to cut him loose on December 23rd.

But based on Gammons’ report, teams are willing to live with a little hacking if it comes with some tape-measure shots, so Peguero’s raw pop will keep him employed. Gammons mentioned the Red Sox as one of the suitors, though it’s unclear if he singled them out because they’re a frontrunner or because of his connections to the club. In either case, expect Peguero to put pen to paper soon, likely on a minor-league hitch with an invitation to big-league spring training.

You need to be logged in to comment. Login or Subscribe
DetroitDale
This is the first time I've ever heard of a Tigers "team official" leaking something that contradicted the official company line.
Reply to DetroitDale