The “fastball hitter” is one of the oft-repeated archetypes in baseball. This is the notion of a hitter who can strike fastballs just fine, but struggles to deal with the unpredictability of a breaking ball. A simple search of Baseball Prospectus’ archives reveals 64 results for “fastball hitter”; Google, surveying the entirety of the internet, pulls down more than 10,000. Like many of baseball’s finest tropes, the fastball hitter has even been enshrined in cinema lore.

Beyond movie characters and conventional wisdom, it seems plausible that some batters might have more difficulty recognizing or mentally adjusting for the break of a curve, for instance. Curves and sliders, in particular, possess not only the capacity to slice through the air horizontally, but also are often said to create visual illusions in the mind of hitters.

The most obvious way to study how a hitter performs against some arbitrary pitch type is to look at their triple-slash lines. But that method of analysis is fraught with problems (I detailed some of the issues here), not least among them that the typical at-bat is composed of more than one type of pitch. To look at how well hitters do against particular varieties of pitches, we have to look at the pitches themselves.

I’ve written before about plate discipline, and how we can employ the information from PITCHf/x to judge a player’s decision to swing or take with more certainty. Here, I apply that metric to each MLB regular in 2014, separating their performance by pitch type. To maintain the necessary sample size, I thereby divide each hitter’s fastballs from non-fastballs, classifying four-seamers and sinkers as fastballs. Then I calculate a responsiveness score for each hitter against those two varieties of pitches.

As a reminder, responsiveness represents the degree to which a hitter reacts to pitches of increasing strike probability. That’s the slope of each line in this graph, which charts Mike Trout’s discipline versus fastballs (red) and non-fastballs (blue). 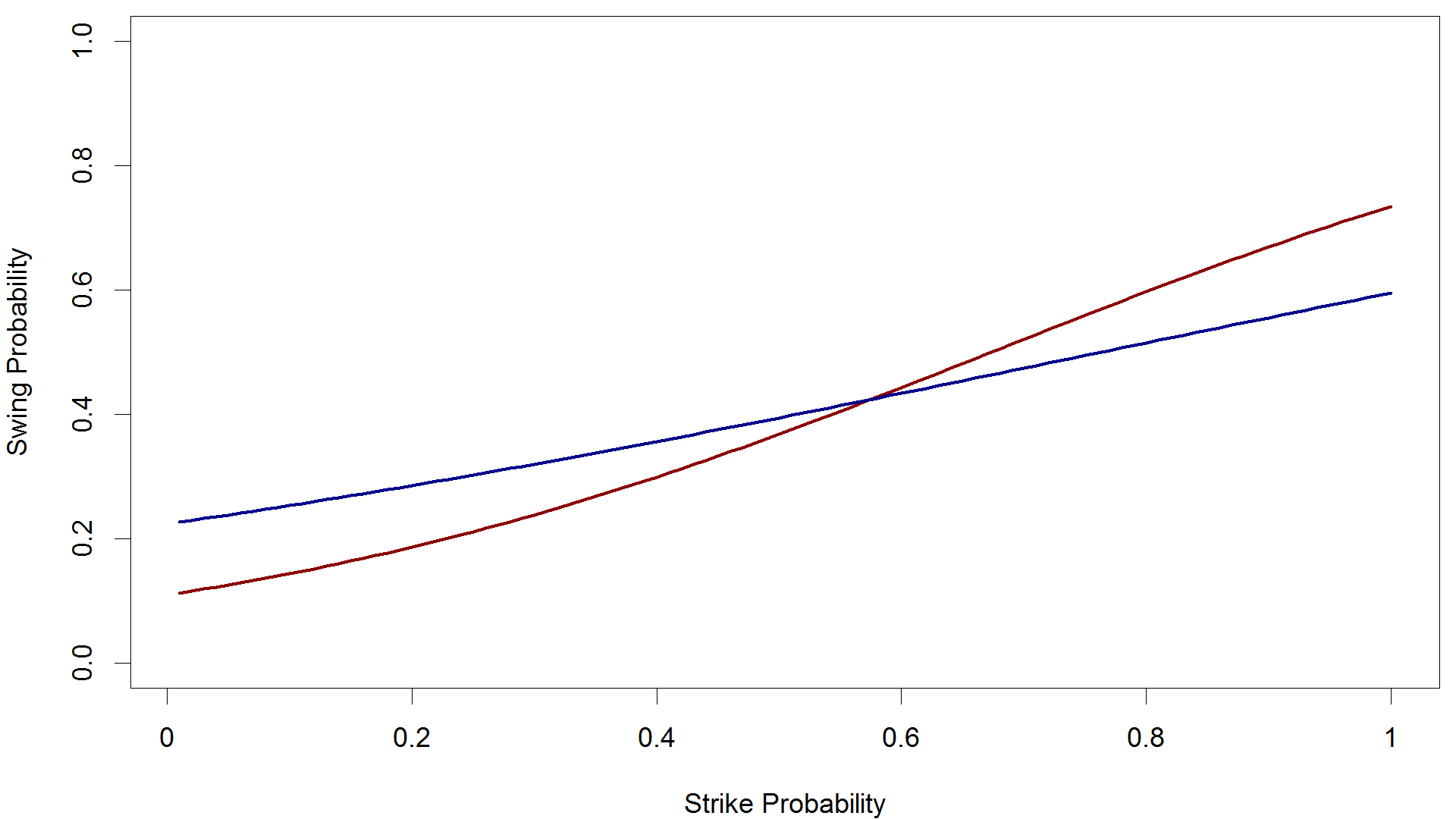 The further a pitch is from the center of the zone (the less likely it is to be a strike), the less a disciplined hitter should be willing to swing at it. Under the hood (i.e. in the gory math details), I am fitting a logistic regression model to each hitter’s decision to swing for each pitch, using as predictor variables the count and the strike probability. I also made a model in which pitch type was included as a predictor, and checked to see whether the coefficient for pitch type was significantly different from zero.

The Results
I did this analysis for all the hitters who saw more than 1500 pitches in 2014. I got the following list of hitters who showed the biggest differences between their responsiveness on fastballs and non-fastballs.

Like the mythical Pedro Cerrano, these guys are adept at identifying strikes when the ball is straight, but have more trouble with breaking balls. A lot of these players are young, and a couple of them are rookies (Billy Hamilton, Jackie Bradley). That fits with what the scouts say: Oftentimes, young players have difficulty adjusting to major-league breaking balls. Pitchers in the minors who can spin their sliders and curves with such ferocity often find themselves called up, so that the minors are likely depleted of high-caliber breaking pitches. Consequently, young hitters must adjust.

That relationship between age and responsiveness against breaking pitches turns out to be true beyond the top 10 list as well. There’s a small but significant (r = .4) correlation between age and the difference between fastball and non-fastball plate discipline. In addition to age, there’s some element of experience involved: Eight out of 10 rookies in the dataset showed significant effects against non-fastballs, as opposed to about half of veterans. There are confounding factors here, but it seems reasonable to believe that adjusting to major-league breaking pitches is a difficult trial, one young hitters often struggle with.

On the flip side, here are hitters who showed the opposite pattern: good against breaking balls, bad against fastballs.

By and large, most hitters do better at recognizing strikes when the pitch is a fastball. The average responsiveness score for a hitter against a fastball is 2.76, whereas non-fastballs come in lower at 2.21, and that’s a considerable (also significant) difference. That fact makes sense, in that the defining characteristic of a breaking ball is its non-standard pattern of movement. All things considered, having to judge a pitch’s final location when it breaks heavily sideways would be more difficult than when it stays relatively straight.

As a result of this fact, the hitters who do best against breakers show much less significant differences than the hitters who do worse against breaking balls (the first list). There is much less compelling evidence that these hitters actually do worse against fastballs, or will continue to do worse. These hitters are older, on average, than the ones who have trouble with breaking balls, but there are still some relative youngsters, like Stanton and d’Arnaud.

A reasonable question might be whether the sample size against each pitch type is big enough for us to accurately judge the responsiveness. If it isn’t, we could be capturing mostly noise, and very little signal. To see whether responsiveness against individual pitch types was stable, I calculated the same measurement in the previous year, and then I looked at the correlation between a hitter’s responsiveness in year 1 vs. the same hitter in year 2. 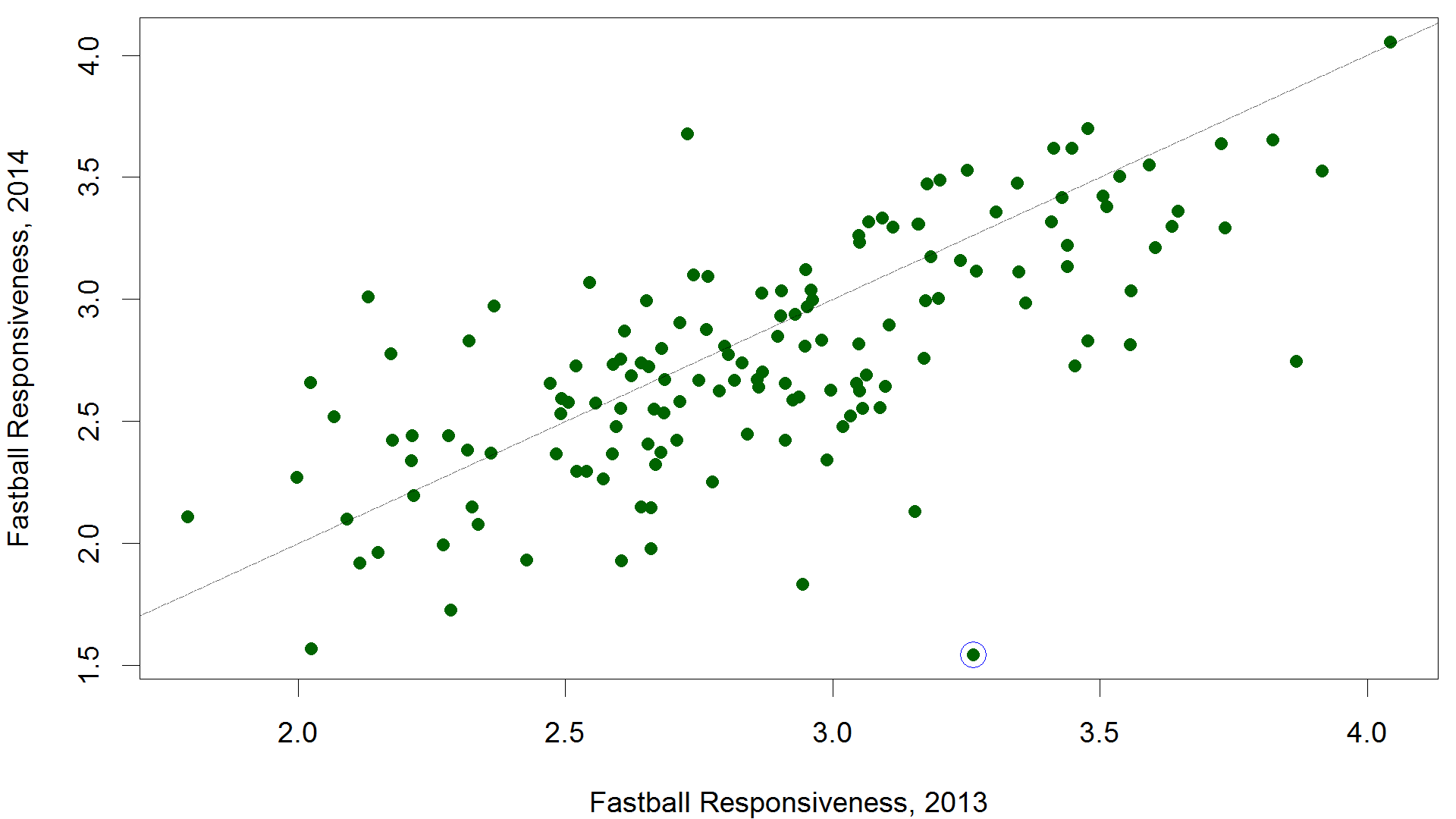 Not every hitter is so steady, which reflects some combination of random variation and genuine change in skill levels. One hitter whose change looks genuine is Lorenzo Cain (circled point at the bottom of the above graph), who went from an above-average score in 2013 to nearly the bottom of major-league regulars in 2014. That didn’t prevent Cain from having a career year at the plate, supplementing his brilliant defense with roughly average offense (TAv of .269). But that middle-of-the-road offense came on the back of a severely elevated BABIP (.380), while his walk rate tumbled from 7.5 percent to 4.8 percent from 2013 to 2014. While it’s always safe to bet on BABIP overachievers to come back to earth, I predict that the rebound is going to be especially tough if Cain doesn’t rediscover his discipline against fastballs.

It is fair to wonder whether any of this is relevant to the way in which pitchers attack these hitters. If Alexi Amarista, for example, is really showing an inability to handle curveballs, the opposition should have noticed and adjusted their strategy accordingly. Regard this graph, which shows the Loess-smoothed rate at which Amarista saw fastballs as the year proceeded: 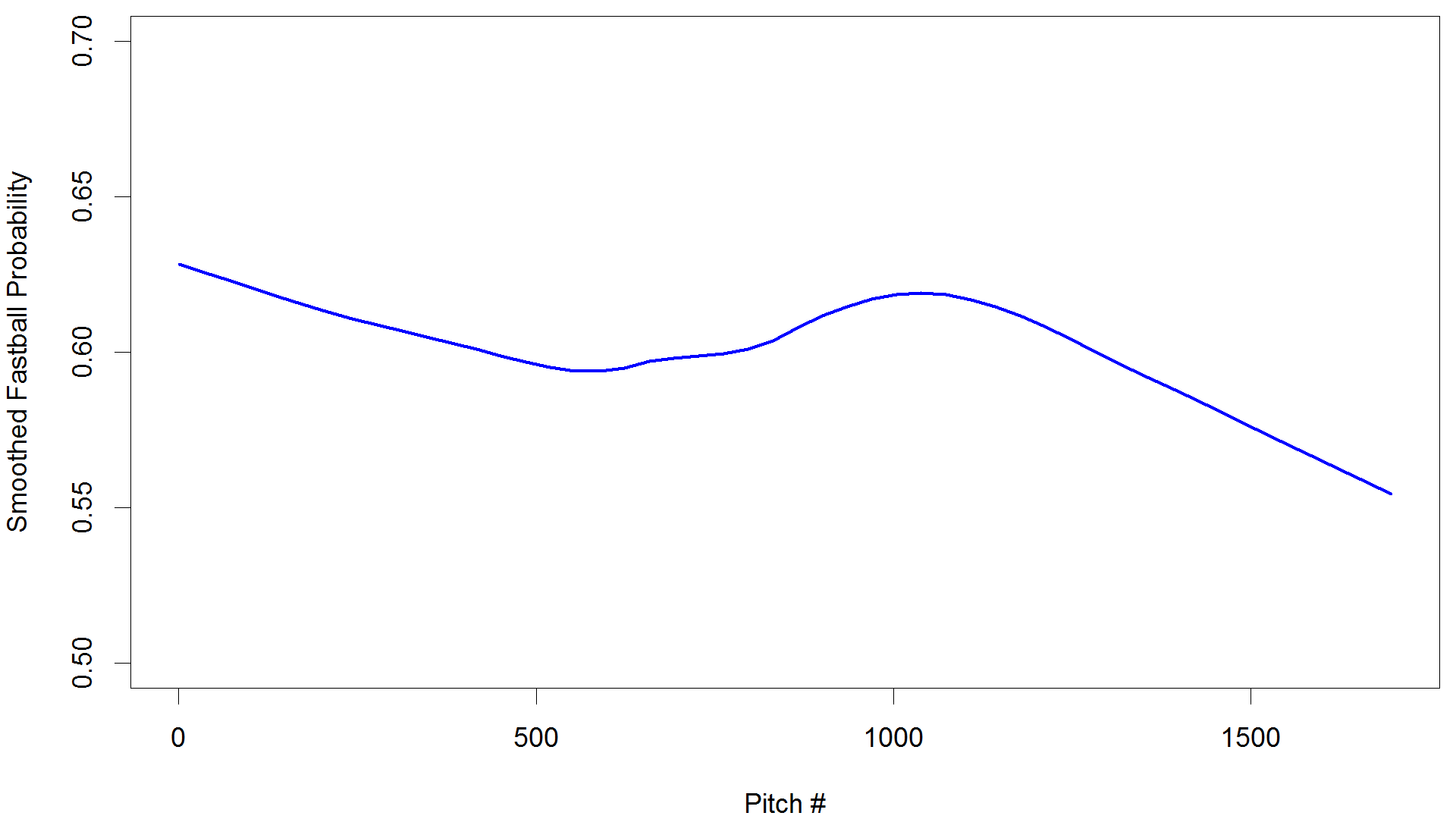 Beyond the anecdotal, there is indeed a weak, albeit statistically detectable, (r = .2) correlation between a hitter’s difference in responsiveness and the percentage of fastballs they see. It’s not anywhere close to explaining the full spectrum of differences we see between hitters, but it is there, and suggests again that these differences in plate discipline are real and consequential.

There’s also the balancing effect of game theory at work. Once a hitter shows a weakness against breaking balls, the pitcher can take advantage by tossing more breaking balls. But throw too many, and the hitter comes to expect them. In that way, the pitcher must walk a delicate line, acknowledging and exploiting the fastball hitter’s tendencies while also never becoming so monotonous that the element of surprise is lost.

It appears that some hitters really do struggle against non-fastballs, and that most of the hitters who suffer the most tend to be young and or inexperienced. Pitchers adjust accordingly, but must always bear in mind that a diet too rich in breaking balls removes the major advantage of unpredictability. As a result, we’re not likely to see any real player quite as lost as Pedro Cerrano, even though some may struggle noticeably.

You need to be logged in to comment. Login or Subscribe
BSLJeffLong
It's for the best that you wrote this instead of me because I wouldn't have been able to resist the urge to pepper it with Major League quotes. For example:

"Bats, they are sick. I cannot hit curveball. Straightball I hit it very much. Curveball, bats are afraid. I ask Jobu to come, take fear from bats. I offer him cigar, rum. He will come." - Pedro Cerrano
Reply to BSLJeffLong
therealn0d
"Jesus, I like him very much, but he no help with curveball."
Reply to therealn0d
BSLJeffLong
"You trying to say Jesus Christ can't hit a curveball?"
Reply to BSLJeffLong
therealn0d
"Whoa, let's not start a holy war, here."
Reply to therealn0d
greywilliams
twould be interesting to know whether there are different patterns for lefties and righties (the batters, not the pitchers). Also whether switchers show different patterns on each side...

Reply to greywilliams
onegameref
Would another factor be that the older batters have begun to lose bat speed and must focus their attention on hitting the breaking balls rather than the fastballs? Bat speed decline would be a powerful motivator to learning to hit the slow stuff.
Reply to onegameref