… five trades that yielded major leaguers Allen Craig, Joe Kelly, Miley and Porcello (via Yoenis Cespedes). It’s a swift recovery, aided by the offensive surplus from their shopping spree earlier this offseason. In Miley, Porcello, and Masterson, Ben Cherington adds three extreme groundball pitchers, a title that Buchholz and Kelly each own, too. The Red Sox ranked 23rd in groundball rate last season at 45 percent, a number that should rise now; preliminary PECOTA runs have all five starters above 48 percent.

Of course, it’s no guarantee they can successfully execute their groundball plans, especially if they’re facing a plethora of fly-ball-inclined lineups in the AL East. It also puts more pressure, or reliance, on Xander Bogaerts, who struggled at shortstop during his rookie year. Peer infield defenders Dustin Pedroia and Pablo Sandoval will help the cause, but Bogaerts will need to work past his growing pains, fast.

Eschewing velocity—no one in this current rotation is an esteemed hard thrower—may benefit the team with additional innings and durability. Over the past three seasons, just 17 pitchers have thrown more innings than Miley’s 599; Porcello’s six-year average is 179; Masterson, even with last year’s knee injury, 183 over five years. While they don’t pump velocity late into games, their relatively diverse repertoires (Miley’s and Porcello’s, at least) might be sustaining their effectiveness as they turn over the lineup.

At $9.5 million plus incentives, Masterson will be trying to find his missing velocity in Boston. He lost nearly three miles per hour last season, diminishing the effect of his sinker/slider approach. Relying heavily on two pitches leaves smaller margins of error for Masterson, who’s already survived on the edge flitting with wide platoon splits. His Chinese zodiac says he matches well against right-handed skewing lineups like Toronto and Baltimore, but he best avoid the Yankees and platoon-flexing Rays.

Miley comes with three years of team-controlled arbitration. His strikeout rate jumped nearly four percentage points in 2014 with increased use of his slider, an out pitch he threw to both righties and lefties, and progressively harder. You might still call him a control artist, but using the weapon more led to more walks too: most sliders tend to land out of the strike zone if the batter doesn’t swing, unlike a fastball Miley can paint corners with. For best results (and to close the gap between his ERA and lower FIP), he’ll try to find the sweet spot between control and bat-missing.

Porcello, projected to earn $12 million in his final arbitration payday, turns 26 in late December. His youth might be deceptive here, as he’s thrown in the majors since age 20; PITCHf/x has logged over 17,000 pitches in his name. The 30-year-old Buchholz has thrown fewer. Again though, as primarily a sinkerballer, large workloads shouldn’t be a big concern with Porcello. He pitches with more control art than Miley and will rely more on the infield behind him—defensively elite Ian Kinsler lowered a portion of Porcello’s BABIP upon joining Detroit, and that should continue with reigning Gold Glover Pedroia.

With Cespedes, Hanley Ramirez, Rusney Castillo, Shane Victorino, along with additional parts Craig, Brock Holt, Daniel Nava, Mookie Betts and Jackie Bradley Jr., Ben Cherington held an extreme surplus of outfielders, especially from the right side. Moving Cespedes balances the team’s needs, shifting extra offensive assets to pitching. Porcello isn’t a grand return on the original asset, Jon Lester, but in all, this didn’t work out poorly for Cherington: he can present Porcello a qualifying offer following next season (something he couldn’t do with Cespedes) and reap a pick if declined, and he still had the opportunity of negotiating seriously with Jon Lester—value in and of itself, even if he ultimately failed to land his former ace.

Cespedes completes his division hop around the AL circuit, moving to the Central after a short stint in the East. He slots into the Tigers’ left field position, pushing Rajai Davis back to fourth-outfielder status. Likely batting adjacent to the Martinezes, he joins a righty-heavy lineup that led the American League in total bases last year. This move, in tandem with trading for Alfredo Simon, infuses more major-league talent into the perennial contending Tigers, while saving the $1 million difference between Porcello’s arbitration amount and Cespedes’ $10.5 million salary.

Cespedes, ineligible for a qualifying offer when his contract ends next season, brings his power swing to Comerica Park, less an offensive deterrent than the spacious O.co Coliseum. His walk rate, however, is absurdly low for a hitter who packs so much punch: 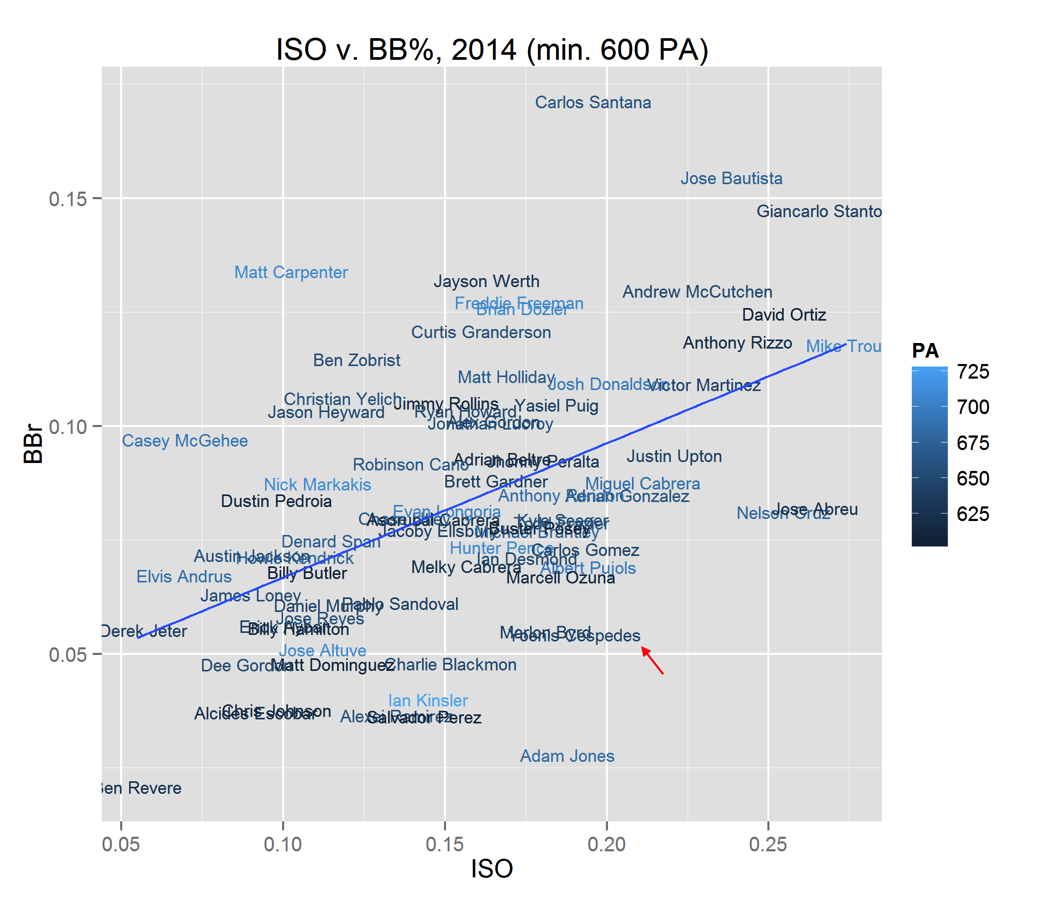 … suggesting Cespedes might have room for taking a few more pitches than the 3.7 per plate appearance he took last year. That adjustment didn’t come in Oakland; maybe a few months of watching Victor Martinez might help?

Alex Wilson, a 2009 second rounder, shuffled up and down between Pawtucket and Boston last year. He shifted from starting to full-time relief in 2012, pitching in mostly low-leverage situations as the Red Sox finished their disappointing year. Throwing in the low-90s with an occasional bat-missing slider easily meets the minimum requirements for Tigers bullpen duty; with their past troubles, a warm arm like Wilson’s should compete ably for middle relief.

The Red Sox drafted the 19-year-old Speier in the 19th round two years ago. He throws in the low 90s from the left side and a small six-foot frame. His work has been restricted to summers in the Gulf Coast League, where he’s been stretching himself to pitch starter innings. Both Wilson and Speier have undergone Tommy John surgery.

De La Rosa has a better chance of achieving this, although he no longer throws in the mid-to-high 90s as he did with the Dodgers, pre-Tommy John surgery. Reaching 160 innings last year was a good sign of recovery for the former top prospect, though he has yet to harness his secondary stuff behind the mid-90s heater—a concern going on four years now. The changeup will produce enough groundballs, so it’s up to a middling slider to complete the starter package; if not, he’ll fashion as a solid relief arm, perhaps in the ninth.

The variance on Webster is even higher; his stuff, starting with a fastball working in the low-to-mid-90s and well separated changeup, flashes third-starter potential. On good days, the slider will miss bats, but his entire arsenal is dependent on command that’s never proven consistent. Moving to the National League might help his cause, where the Diamondbacks can slot him at the end of their rotation. That doesn’t keep him far away from the bullpen, either.

You need to be logged in to comment. Login or Subscribe
kraigy1973
"De La Rosa has a better chance of achieving this, although he no longer throws in the mid-to-high 90s as he did with the Dodgers, pre-Tommy John surgery."

His fastball AVERAGED 94mph last year, and he topped out at 99mph several times. He weakened as the season went on, naturally, but it's incorrect to say he doesn't throw mid to high 90s anymore.
Reply to kraigy1973
AndrewKoo
Poor clarity on my part. By "throwing in the .. " I mean that's where the pitch velocity sits, not touches. You are correct.
Reply to AndrewKoo
DetroitDale
Despite my sentimental attachment to Rick Porcello having watched him develop from a kid rushed to the majors to a good pitcher pilloried for not reaching his potential to finally reaching said potential, I don't hate this deal. I actually like it. There was a need for another good bat in the lineup and Cespedes fits the bill. Getting a moderately useful piece for the pen and a prospect too is nice. Sure I'm concerned about Cespedes' poor walk rate, but he's been productive enough despite it long enough that it's not an unreasonable hope for him to continue being productive, and while this is the second lost ace, there's still three on staff, enough to have playoff hopes but not enough to carry a team by itself. Fortunately there's a little more reason to believe this lineup will pull it's weight, which is good because it'll have to.

The other Boston Acqusition, Masterson, intrigues me because I thought that he'd be worth a flier because pitching coach Jeff Jones could bring him back to his old ace ways for less than ace prices. Unfortunately he got $9M which is still apparently more than the current tigers can afford.

And this is what worries me, the parallels between this year and last year. They needed another power hitter (A closer) but they needed to make room under the payroll so they traded Porcello (Fister) in a hurry up move, replacing him with a less costly alternative in Simon (Ray/Krol) and it was the best they could do because of time and money pressures.
Reply to DetroitDale
Johnston
Interesting comparison!
Reply to Johnston
andrews
As each day passes I believe more and more that Scherzer will sign with Detroit. Simon is insurance and can easily slip into a long relief role in the bullpen if Max does come back.
It also enables Dombrowski to present a complete rotation to Boras to take away some leverage from their negotiationing position.

Despite Boras' church jumble sale comment, I believe Boras will phone Mike Illitch if Max receives an acceptable offer from elsewhere.
Reply to andrews
Justice
Yoenis Cespedes is a fine power hitter. But is that what the Tigers needed?