The latest on Jon Lester
The top left-hander on the free agent market will spend his offseason in the Atlanta area after buying a $3.4 million mansion there last April. He will not, however, spend the upcoming year with the Braves.

David O’Brien of the Atlanta Journal-Constitution wrote Monday that the Braves won’t match dollars with higher-payroll clubs for the former Red Sox ace, who could return to Boston but is also on the minds of the Cubs and Giants. In fact, Lester met with Giants representatives including manager Bruce Bochy yesterday, as he continues to mull over where he’d like to spend the bulk of his 30s.

Sources told CBS Sports’ Jon Heyman that the active offers in the Lester bidding are $138 million from the Cubs and $130 million from the Red Sox, both over six years. If those reports are accurate, the Giants would have to pony up at least that much to stay in the running. The Braves have already put away their wallet.

Given the high volume of interest in the southpaw’s services, Heyman speculated that Lester might reel in $25 million a year with a total outlay in excess of $150 million. Our own Jeff Moore projected three or four more years of ace- or no. 2 starter-level work from Lester, who turns 31 on January 7th. He’s coming off his best year (4.2 WARP) since 2009 (5.3 WARP) but is just two years removed from a 4.82 ERA dud.

Plan B for southpaw-hungry clubs that can’t afford Lester might be Liriano, who posted a 3.38 ERA backed by a 3.56 FIP with the Pirates this past year. But those suitors will have to snatch the 31-year-old away from the Bucs, who are intent on keeping him in black and yellow.

According to Chris Cotillo of SB Nation, Liriano—whose 162 2/3 innings in 2014 marked his heftiest workload since 2010—is general manager Neal Huntington’s “main priority,” with other starting pitchers on the backburner until he puts pen to paper.

Liriano’s first tour of free agency took him from Chicago to Pittsburgh, where he inked a one-year, $1 million deal with an $8 million club option for 2014 that vested when he stayed healthy the previous season. Following back-to-back seasons sans elbow or shoulder trouble—which plagued him from 2006, when he underwent Tommy John surgery, until 2011, when he needed two separate disabled-list stints to nurse his shoulder—Liriano should be in line for a much bigger payday this time around.

Cotillo believes Liriano will secure a three- or four-year commitment, and noted that the Red Sox and Royals have shown interest. Manager Clint Hurdle’s rotation currently consists of Gerrit Cole, Vance Worley, Jeff Locke, and A.J. Burnett, who came back across the Keystone State earlier this offseason. Mid-rotation starters who can hold down the fort until prospects like Tyler Glasnow and Nick Kingham are ready to step in will be a dire need if both Liriano and fellow free agent Edinson Volquez leave town.

Astros want an experienced closer
Six different pitchers earned saves for the Astros in 2014, with Chad Qualls—owner of a sparkling 43-to-3 K:UIBB ratio—leading the pack with 19. If general manager Jeff Luhnow’s rebuild goes according to plan, there will be a lot more save opportunities in Houston in the coming years, and he wants a seasoned ninth-inning stopper around to handle them.

Ex-Yankee David Robertson is the first choice, and an executive told Heyman the right-hander already has $39 million over three years on the table, possibly from the Astros. Whether or not that offer came from Houston, it’s an indication that the righty won’t come cheaply or without the sort of long-term hitch relievers often make their employers regret.

If the Astros opt to hunt for bargains, they might find one in former Giants closer Sergio Romo, who lost his save chances to Santiago Casilla but pitched very well after being demoted to setup duties. Romo cast aside his nascent changeup and regained feel for his no-dot slider 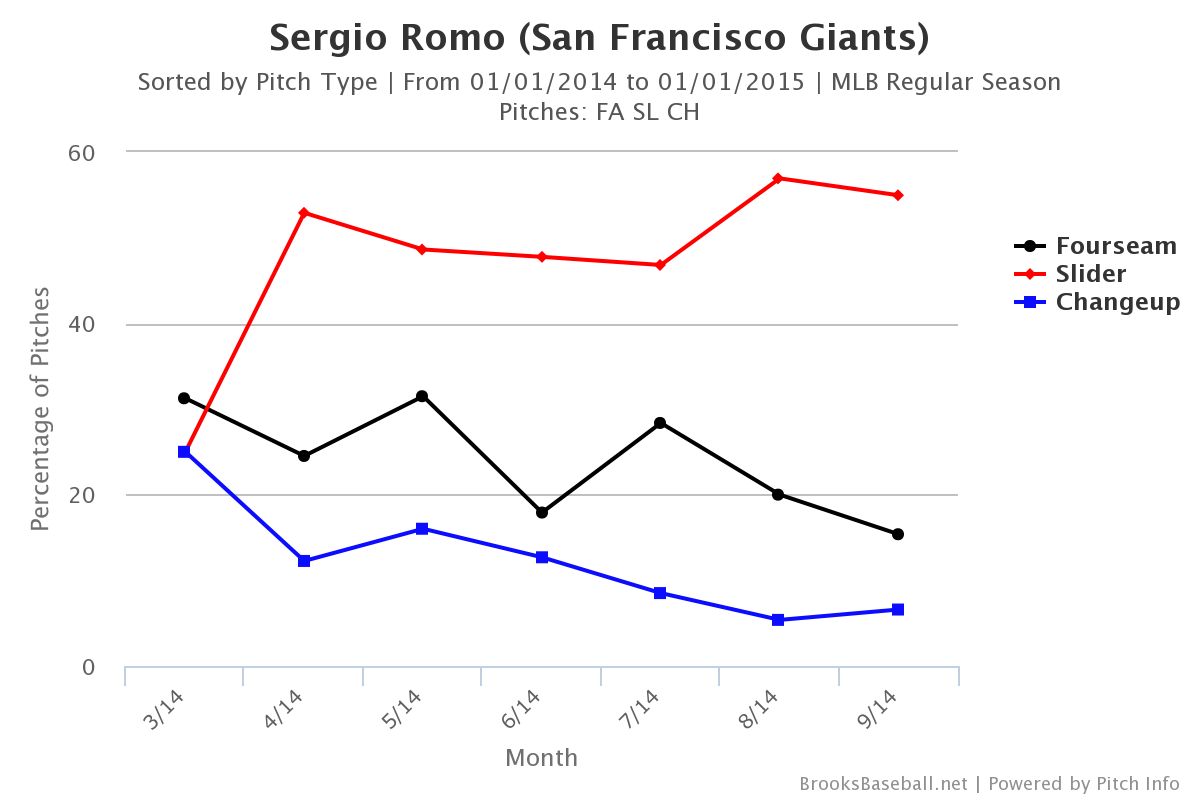 stifling opponents to the tune of a 20-to-1 K:BB ratio and just one homer allowed in 16 innings from the beginning of August through the end of the regular season.

A lack of premium fastball velocity makes Romo an unorthodox choice to close, but he’s just a season removed from 38 conversions in 43 tries and a 2.54 ERA assembled along the way.

Houston Chronicle beat writer Evan Drellich wrote Monday that Andrew Miller is also on Luhnow’s radar. Like Robertson, Miller is believed to be in line for a four-year commitment.

You need to be logged in to comment. Login or Subscribe
seanqueue
I have to admit I'm surprised to hear the Astros are in the market for a closer. Back at the trade deadline I remember hearing Qualls name a lot as a target for teams needing help in the back end of the bullpen, and the team was vocal about not letting him go. I know he's signed to an insanely team-friendly contract, but if the plan was to go out and buy a big-time closer for 2015, wouldn't they have been much better served dealing him at his peak value back in August?
Reply to seanqueue
Plucky
I think the teams-trade-too-much-for-relief help trend is largely over and done. In 2013 the Astros traded an effective Jose Veras to RP-needy contender (DET) and got a fringy prospect who had just made it to high A. That's worth something, but not a huge amount. The market now is that if you want a prospect with everyday-starter upside he's going to be >2 years away from the show with the accompanying hasn't-played-AA-yet risk.

Starting around mid-last year the Astros switched out of trading now-for-later mode and moved into make-the-MLB-team-better mode. They are likely targeting a .500 record this year, and Qualls on a friendly deal is worth keeping around rather than trading for a lotto ticket. I am very leery of a 4-year commit to a RP, even one as high quality as Robertson, but if the Astros do it it's a whole-contract consideration and not mainly a 2015 one- on a 4-year deal, the Astros would be signing Robertson with the expectation he will be giving them high-leverege innings in October of 2017 and 2018. I have not looked at what next-year's FA class looks like, but a Robertson signing would be defensible if it looks particularly weak.
Reply to Plucky
statsrath
It seems a bit strange to me that a team that's still a couple of years off from serious contention would invest significant money into a reliever. Robertson hasn't really shown any signs of volatility, but it just strikes me as a curious allocation of funds. We'll see if they actually put they money where their mouth is on this one.
Reply to statsrath
Plucky
I do agree that it would be curious, and would be especially so in the context of their overall payroll level.

The Astros are in a weird spot payroll-wise though- for quasi-political reasons, they are essentially obligated to spend money on something this winter, and have said they plan on adding ~20m in payroll. Given that the RSN situation has been resolved they would be provoking a major fight over the next CBA and earn the hatred of all baseball if they reneged on that.

The issue then is, where is the best place to spend the money you have to spend? The two goals of spending that money are 1) get better 2) without hurting through opportunity cost your longterm plans. The way to do both is limiting commitments this offseason to 3 years. The problem with limiting commitments to 3 years is that it takes you out of the running for any top-tier FA in the rotation or lineup. Your only options then are to sign a top-tier reliever (a dicey proposition in general) or swing a trade in which you take on the last 2-3 years of an existing contract. They are almost certainly working the latter option on the phones, but there are not a whole lot of 3-years left contracts on the trade market that include a player you actually want in the lineup and provide better value (after what you trade away) than Robertson would. An example of what that looks like is the Braves reportedly telling the Astros the price of Evan Gattis is BJ Upton. Is Carlos Corporan for Gattis+Upton better value than 3/39+comp pick for Robertson? Perhaps, but not obviously so
Reply to Plucky