Yankees eyeing Jason Grilli as Plan B
After fanning 96 batters in 64 innings as the Yankees closer in 2014, David Robertson is in line for a hefty payday. Sources told WFAN beat reporter Sweeny Murti that the 29-year-old can expect to receive $13 million a year for either three or four years, for a total outlay of $39-52 million.

Murti believes the Yankees will be amenable to the three-year arrangement, but that if Robertson demands a longer commitment, they might consider alternatives. Rookie setup man Dellin Betances was even more dominant than the ninth-inning stopper, racking up a 135 Ks and only 24 walks over 90 frames. From a stuff standpoint, Betances is at least as well equipped as Robertson to handle closer duties. If GM Brian Cashman tickets the 6-foot-8, 260-pounder for the job, he’ll have a host of other options from which to find a replacement setup man.

Given his age, Grilli is likely to settle for no longer than a two-year pact. That’s much more comfortable territory for Cashman than shelling out $52 million to Robertson, and there’s reason to believe that Grilli has in fact sorted out his first-half issues.

General managers Neal Huntington and Jerry Dipoto struck the reliever-only barter—in which Ernesto Frieri headed to Pittsburgh—on June 27th, two days after Grilli imploded to the tune of four hits and two runs in two-thirds of an inning. The next day, Grilli tossed a clean frame for the Halos, quickly settling into his new digs. 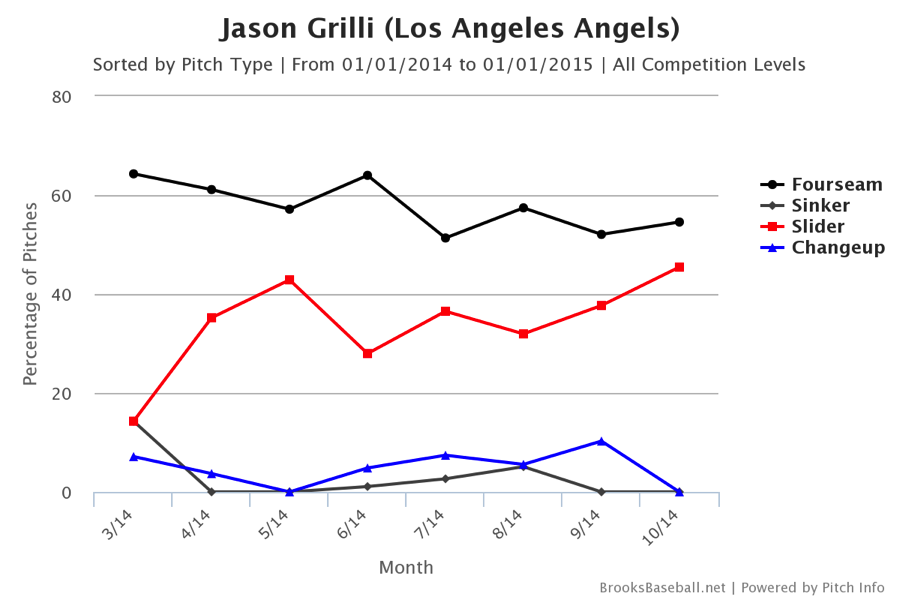 Over the rest of the season, the Angels altered Grilli’s pitch selection to feature fewer fastballs and more sliders. That makes sense, because his breaking ball is significantly more effective than his heater, though what prompted the change in approach is unknown. Whatever it was, it produced the desired result.

Need a scuffling lefty outfield bat? Call the Rays
According to FOX Sports’ Jon Morosi, Tampa is making Matt Joyce available. If someone can figure out what’s behind Joyce’s precipitous power drop—and, more importantly, fix it or count on it to return on its own—he could be a useful, low-cost addition.

The 30-year-old has seen his offensive output dip steadily since batting .277/.347/.478 and earning an All-Star appearance with Tampa Bay in 2011. He cranked 18 homers in 481 trips to the plate as recently as 2013, though that long-ball output was sliced in half last year, and Joyce’s slugging percentage plunged all the way to .383.

Was this the case of a platoon player being deployed too liberally against like-handed pitchers? Not quite—although going 5-for-34 with no walks and 17 strikeouts versus southpaws didn’t help matters for Joyce. The right-handers he previously clobbered held him to a .263/.356/.393 slash line in 2014, nice on the on-base end but lacking in power. It added up to a .286 TAv, not terrible by any stretch, but down from .300 the year before and disappointing for a part-time player employed almost entirely for that skill.

Joyce took home $3.7 million in 2014, his second year of arbitration eligibility. He’ll see a modest raise from that salary, so teams that don’t foresee a rebound are likely to shy away. Those that are more bullish on Joyce’s outlook might phone new GM Matt Silverman in the coming days.

Pablo Sandoval in decision-making phase
We’ve expected Sandoval to be one of the first major free agents to put pen to paper, and we now have a timeline for his choice: The Panda’s agent, Gustavo Vasquez, told FOX Sports’ Ken Rosenthal on Saturday that a deal should be done before Thanksgiving.

The bidding is down to three teams: the Giants, Padres, and Red Sox, all of which have submitted offers in the neighborhood of five years, $95 million, assuming previous reports offered a clear window into the situation. John Shea of the San Francisco Chronicle wrote earlier on Saturday that San Diego’s offer is the most lucrative of the lot, but added that money alone might not make the Friars Sandoval’s first choice. (The Red Sox' interest supposedly doesn't hinge on whether they can sign Hanley Ramirez, which is reportedly set to happen on Monday.)

For that reason, Rosenthal doesn’t believe it’s worth dwelling on relatively insignificant differences between the dollar figures:

Possible that Sandoval could pick the team he wants, ask them to reach a number and close the deal that way with any of three bidders.

Whether Sandoval goes east, south, or stays put in San Francisco, his decision could set off a domino effect in the third-base market, where demand currently seems to outstrip supply.

You need to be logged in to comment. Login or Subscribe
oldbopper
As I write this, 9:45 EST, it appears that the Red Sox have agreements with both Ramirez and Sandoval. Where in the world is everybody going to play? Assuming that only nine men are allowed in the lineup at one time, and only twelve non-pitchers on the roster, Papi is unique, the flurry of trades should be something to behold. I mentioned Betts, and a pitcher or two, for Sale and if Cespedes is on the opening day roster, it would be more amazing than a pig flying. Fister or Zimmerman are probably now on the radar as well and Mike Napoli might look good in Washington where their first baseman just left town. Speculating is always, just that, speculating but this off season has just begun for the Sox and it should be very interesting.
Reply to oldbopper
newsense
Washington's first baseman is likely going to be Ryan Zimmerman.
Reply to newsense
jfranco77
Agreed. They seem set on moving Rendon to 3B and opening up a hole at 2B (unless they trade for a shortstop like Castro and move Desmond to 2B??)
Reply to jfranco77