Before Giancarlo Stanton was a Marlin for life, he was your favorite team's next big trade target—or so everybody with an internet connection assumed. In January 2013, Ben Lindbergh looked at one of the seediest neighborhoods of the internet: The fake-Giancarlo-Stanton-trade block. Enjoy.

Being a baseball rumormonger is a difficult job to do well. First, you spend years building a network of sources who can and will tell you interesting things about baseball teams. Even after you’ve collected your contacts, be prepared to put in long hours and work weekends to stay ahead of the story or be the first to break it. Don’t expect to sleep or be seen without a cell phone.

However, the job has its perks: attract a large enough following, and you can create your own stories. Slow news day? Pick a highly coveted player whom it might make some sort of sense for a team to trade. Ask an executive who works for that team if there’s any chance that said player might be moved. If the executive says the player won’t be traded under any circumstances, you have a story, or what passes for a story in the MLBTR/Twitter era. If the executive allows even the slightest sliver of a possibility that the player might be available, you have a story that lives a long time and begets a long line of other stories, like something straight out of the Old Testament. What is he worth, and what might it take to trade for him? Which teams might match up? Will the team still be willing to trade him tomorrow, and the day after tomorrow? What about the day after that?

Giancarlo Stanton rumors have been circulating since November, when the Marlins traded all their other players to Toronto and Stanton tweeted, “Alright, I’m pissed off!!!” But they’d been dormant for a a few weeks before December 30th, when Marlins AGM Dan Jennings told Jim Bowden that the team was “willing to listen” to offers for Stanton. Never mind that Jennings insisted that the Marlins “are not shopping him” and are “certainly not looking to move him.” Never mind that he added that the Marlins have “never not listened to a deal on any player.” We now know for sure that the Marlins will not hang up their phones, block your number, and smash their SIM cards if you call them and say “Giancarlo Stanton,” so it’s safe to speculate. We’re guilty of speculating ourselves, though we at least attempt to be realistic about it.

When BP alum Jonah Keri ranked the top 50 players in baseball by trade value in late November, Stanton ranked seventh. He’s making little more than the major-league minimum, won’t be arbitration eligible until after next season, and won’t be a free agent until 2016. He’s newly turned 23 years old, and he’s already one of the best hitters in baseball. His batted balls break scoreboards and travel farther than any other batted balls have since 2009. On the other hand:

Late on Wednesday, Ken Rosenthal found a source who said that the odds of a Stanton trade are “as close to zero as they can be.” Jon Heyman found a “person familiar with marlins thinking” (“Stanton is good and our fans are fed up with us already”) who was willing to put the odds at exactly zero. But by then it was too late: Stanton had already been acquired in internet comment sections by fans of all 29 other teams. A few years ago, Matt Swartz laid out several rules for constructing plausible trade rumors in a piece at BP: salary matters, years under team control matter, quantity doesn’t make up for lack of quality, and so on. Most of the commenters who proposed packages for Stanton must have missed that article.

You might think your team doesn’t have what it takes to trade for Stanton. You might already have given up on getting him. But somewhere on the internet, someone thinks that not only can your team trade for Stanton, but it won’t be that hard. The following are real Stanton trade packages proposed by fans of every team on the internet this offseason. (The team names link to the sources, in case you want to verify that someone actually said these things.)

Knowing what we know now (namely, that Morales is a Mariner), we can safely say this one won’t happen. But it made so much sense at the time!

This proposal starts with “would never happen,” but Snake Diggity still published it, which suggests that he or she thinks it would at least be in the realm of possibility if the Marlins would be open minded about it. “The Martinii” are Fernando Martinez—whom the Astros got for free from the Mets, a team without an outfield—and J.D. Martinez, who had the worst WARP in the NL last season. So, no, this would never happen. But if it did, “wgr56” would accept it, albeit with a heavy heart:

No, but we’re sort of on the right track here: both players are moderately productive and under team control for at least as long as Stanton. Believe it or not, this might be one of the best of the bad proposals. 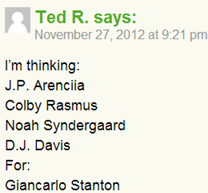 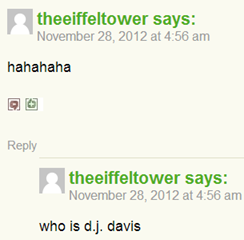 And one commenter’s response: 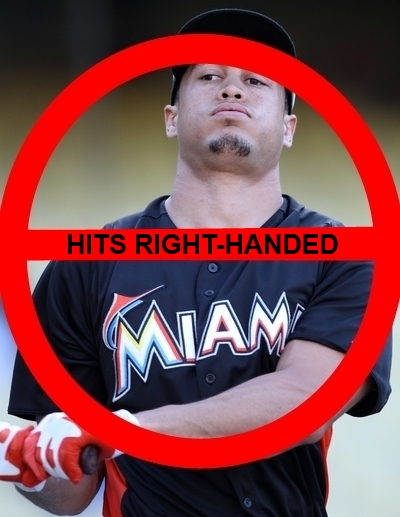 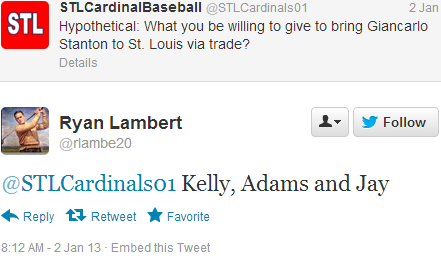 Stanton is younger than all three players in this package. Any Cardinals trade that doesn’t start with Oscar Taveras or include Shelby Miller probably isn’t painful enough for St. Louis to make sense for Miami.

Or the cubs could pursue the foolproof “make the Marlins pay for Alfonso Soriano and Carlos Marmol” approach:

No way that one would work without Brad Hand.

The D-Backs have spent their whole offseason trying to trade away an outfielder. This is just about the only proposal that they trade for one:

Yes, but where would Stanton play? That’s the only problem with this proposal. 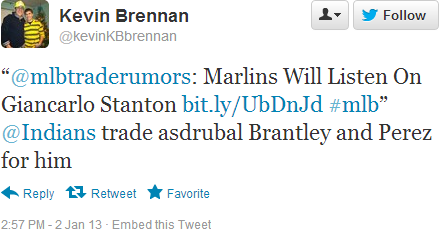 Many of the Mariners proposals I saw included some sampling of the team’s top five prospects, which might be something the Marlins would be willing to discuss. But the Felix family of fake Stanton trades—including Felix for Stanton and Buehrle, Felix and Smoak for Stanton, and Felix for Stanton straight up—probably wouldn’t be, since Felix makes money (among many other reasons).

Scott Hairston is not actually on the Mets, so the Mets can’t trade him for Stanton. Had he known this is all it would take to get Stanton, Alderson have extended Hairston before he declared free agency.

Aside from Bryce Harper, who stopped short of proposing a trade, this is the only person on the internet interested in bringing Stanton to DC:

Dylan Bundy is one of the best prospects in baseball, but he’s recorded four outs in the majors, and pitching prospects are so scary there’s an axiom about it. Any team would trade its top pitching prospect straight up for Stanton.

Unless that team already has Nate McLouth. 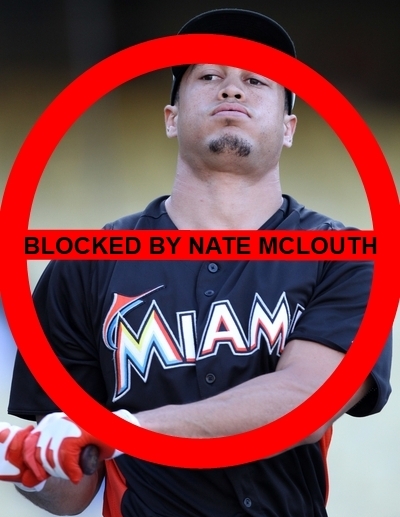 Will Venable is a nice player, but he’s also 30 years old, so the only potential he has is to be worse than he’s already been. Chris Denorfia is 32. In this scenario, the Marlins are most interested in acquiring old outfielders from the team that ostensibly has the best farm system in baseball. The Marlins work in mysterious ways.

Unfortunately, trades require the consent of both teams. On the internet, you’ll see a lot of people proposing trades that they would make “in a heartbeat.” The problem is that any trade one side would make in a heartbeat is a trade the other side wouldn’t make at all.

One gracious Phillies fan was willing to go so far as to include other players in addition to Brown:

The Rangers are the favorite for Stanton. They have a need for him, and they also have cheap, talented, and tradeable players (Jurickson Profar, Mike Olt, Martin Perez) whom the Marlins might want. As much as it pains me to say it, because the two teams match up so well, many of the Marlins-Rangers trades proposed by internet commenters—deep breath—mostly make sense. This was one of the worst, which was also one of the best relative to the other teams’ fake proposals.

You can trade Wade Davis for a talented young right fielder, but it only works once. For the sake of completeness, here’s one with players who are actually on the Rays roster:

Rockies vs. Rangers: advantage Rockies! (If you root for the Rockies.)

When the Tigers traded for Miguel Cabrera, they had to give the Marlins two top-10 prospects and four other prospects and take on $29 million in dead Dontrelle Willis weight (which wasn't necessarily regarded that way at the time). But now? Nick Castellanos.

I found a total of two fake Twins proposals for Stanton. Maybe Midwesterners don’t like to dictate what their teams should do.

If you've made it this far, you've probably noticed that most fans have a tendency to overrate their own team's prospects. So here’s how you know the White Sox have a lousy farm system: even their own fans can’t construct a single scenario that would convince the Marlins to trade Stanton to Chicago for minor leaguers. 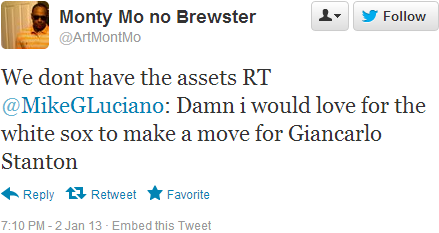 There are more fans of the Yankees than there are fans of any other team, so it follows that the Yankees would also lead the league in bad fake trade proposals.

The problem with prospects is that a bunch of potential bench players and back-of-the-rotation/bullpen pitchers, when packaged together, can’t combine Voltron-style into prospects people want. As one front-office executive said when I sent him this proposal: “Here are all the prospects I don't really think fit into our plans or won't turn into stars, would you take them all in exchange for your young All-Star player with Hall-of-Fame potential?”

Forget for a moment that the Marlins wouldn’t want to trade Stanton for someone who plays the same position; is not nearly as good; is much older; and is much more expensive. This proposal would also require amending the CBA to make trading multiple future draft picks and recently signed free agents things that baseball teams can do. Minor obstacles, I know, but you figure you’d at least have to toss in an Eduardo Nunez or a Melky Mesa to make the hassle worth the Marlins’ while.

Now we’re talking: in this scenario, the Yankees actually give up someone good whom they’re legally allowed to trade. It’s an expensive second baseman and impending free agent whom the Marlins would never want, but it still hurts to surrender him. Also acquiring the Marlins’ top prospect would probably ease the pain.

So that’s Giancarlo Stanton’s market value, according to internet commenters who want him to come to their teams: not much. Ultimately, we're all convinced that we're above-average drivers, and that we're better looking than we actually are, and that our teams would have no trouble trading for Stanton. In conclusion,

You need to be logged in to comment. Login or Subscribe
AlexTheGreat
For completeness, I really think you should dig up some horrible Marlins' fans' trade ideas.
Reply to AlexTheGreat