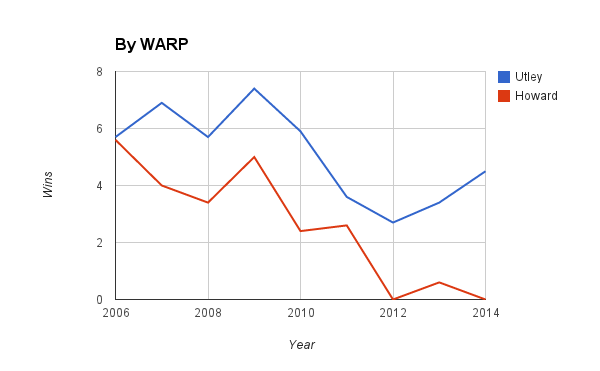 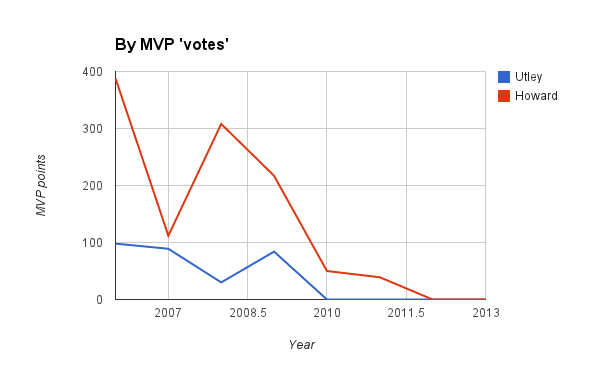 Just for the picture-averse, I'll restate: Ryan Howard has never in a season been better (by WARP, or either of the WARs) than Chase Utley; Utley has never finished higher in MVP voting than Howard. Howard has more MVP shares in his career than Chipper Jones did. Utley has roughly as many MVP shares is his career as Howard got in 2008, the year he finished only second.

@SamMillerBP Sam I swear if you jinx it

Will Utley actually get a vote, just one tiny little 10th place vote to finish ahead of Howard? He finished with 4.5 WARP, which is 30th best in baseball. Around 40 position players typically get MVP votes, so you might say, YEAH! But of course the distribution of votes by WARP isn't a smooth slope down. The top 15 or so basically all get votes, so that's 15 spots for 15 players. The next 20 or 25 spots, though, are spread out among the next 100 or so WARP finishers. A season like Utley's could, theoretically, be anywhere from top three to not receiving votes. As an example, here are the 30th-highest-WARP players in each of the past 15 years, with their MVP vote totals:

Considering that a) the Phillies were a funnel of misery this year and b) Utley hardly gets votes when he finishes near the very tippy top of baseball in WARP, the most likely outcome today is probably no votes. And the x-axes of our charts will get one sad face longer.