This is the third in an unknown-part series. Previously: Mariano Rivera’s postseason career, and Kerry Wood’s 20-strikeout game.

Most of us maintain two seemingly contradictory attitudes toward our favorite sport. One is that baseball is unknowable, impossibly unpredictable, that it is a swirl of flukes and mysteries ever producing Matt Carpenters and Brandon Woods for us to puzzle over. The other is that baseball is exceptionally knowable, that it is one of the world’s largest datasets, that we are getting smarter with each trial and that, in the long run, we know that the game is predictable—beatable, even. That is why you/I/we are all here at a paywalled site dedicated to distributing baseball knowledge. If we do that, then we must believe baseball knowledge exists.

Which viewpoint does Mike Trout’s rookie season support? Consider: While he was still just a boy, skilled talent evaluators had identified him as one of the teenagers most likely to be a great major-league baseball player 10 years or so in the future. When he was 17, the Angels’ internal report on him forecast him to be the “best player in the world—period.” When he was just 18, years before he would reach full maturity, scouts were suggesting similarities to some of the greatest players ever, players whose entire careers—indeed, entire lives—had been played to conclusion already. When he was 19, in A-Ball, well-designed projection systems identified him as a hitter on the cusp of league average, and by the winter before his age-20 season ZIPS saw him as the best player on the Angels. PECOTA, in a delightful bit of found humor, threw a Mickey Mantle comp on him. Everybody agreed he was an elite prospect. Baseball, as it turned out, was predictable.

Except! Did anybody really get it right? Here’s that prescient ZiPS line for Trout in 2012:

What he actually did: .326/.399/.564, 30. Which means that the bullish projection on Trout missed by as much as if Trout had hit .208/.277/.264, with no home runs. It might actually have been the single worst projection that ZiPS made that year. This is not to pick on ZiPS—I chose it because it got closer than PECOTA did, and was at least as close as the player comment I wrote about Trout for that year’s BP Annual, which noted both that he was a future superstar in nearly every simulation of this universe and that “his spray chart suggests he might have had trouble catching up to big league fastballs.” Oh brother.

The ZiPS example is just to note that, for all the back-patting you might think is merited for us all seeing Trout for what he was, we actually missed on him by a lot! All of us. The Angels sent him to Triple-A to start the season, left him there until they were already nine games out of first. The prospect gurus debated whether to put him ahead of Matt Moore or not. (We ultimately put Trout third here at BP, behind Moore and Bryce Harper.) And if any scout saw him as being a 10-win player right then and there before his age-20 season, you’d figure his team could have put together something to steal the four- or five-win asset that the Angels probably thought they controlled.

As much as any of the amazing things about Trout’s age-20 season—and there are plenty of amazing—that’s probably what makes it stand out the most to me. In March, Trout was one of the three best minor leaguers alive. By April, he was arguably the best minor leaguer alive. By June, he was probably the best major leaguer. And by July, just three months after he was considered worse than Matt Moore, I walked into Ron Washington’s office, asked him to compare Mike Trout to Willie Mays, and didn’t feel the least bit bad about it.

One of the greatest seasons we’ve ever seen basically came out of relatively nowhere. We got Mike Trout so right, and we simultaneously got him so, so wrong.

Trout’s career will certainly go down as a wonder, either because he keeps doing this—he already has more career WARP than Steve Garvey—or because he doesn’t, and we find ourselves once again surprised. But even if he finishes out his career as a 130-WARP player, nothing he does will quite be the wonder that his age-20 season was. And nothing in his age-20 season was quite the wonder of his month of July.

Trout entered the month hitting .336/.391/.526. He had eight homers, three triples, 20.4 RE24. In that month—which, incidentally, including a four-day All-Star break, during which he was limited to just a frivolous single against the first knuckleball pitcher he’d ever seen—he hit .392/.455/.804, with 10 homers, two triples, 20.4 RE24. He stole nine bases without getting caught. His WARP that month, at 2.8, was the best month of anybody in baseball that year. He had the best baserunning month of any player in any month that season, and the second highest VORP of any player in any month that season. 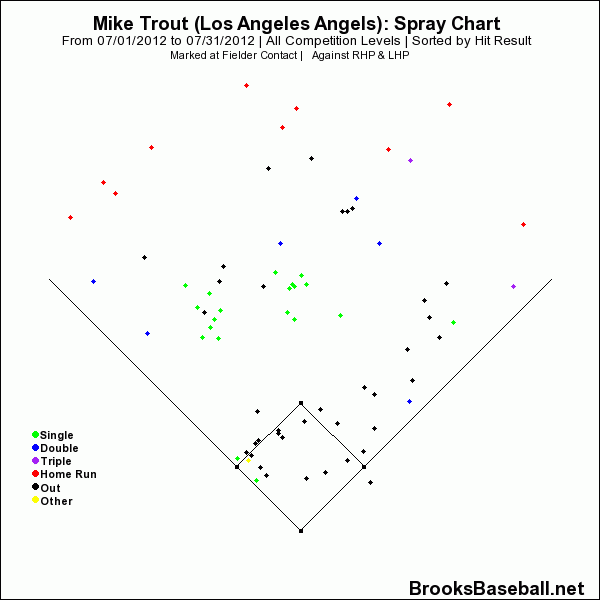 You might see any of a number of clusters or constellations there. Here’s what I notice:

1. The ring of home runs—10 home runs and no two of them the same, ranging from this kind of absurd

To this kind of absurd

2. Random doubles just hanging out in the middle of the field, like an undercover cop wearing loafers to a radicals meeting.

3. The two fly balls to deep center. Trout had a .412 BABIP that month. If you were to rewatch a couple dozen of his batted balls from that month (as I just did), you would actually start to wonder whether he got a little bit unlucky.

That was in New York. Before the series began, the YES network promos showed highlights of Trout while a thick voice growled, “You’re in our town, now.” When Trout came to bat early in the series, some fans booed him. He had become the biggest profile on a team that had Albert Pujols. Three months earlier, he was playing in Triple-A, where he had been demoted, and where his parents still bought his laundry detergent. Just the craziest year.

Hypothetically, let’s say there’s a ballplayer who is worth 20 runs on defense (which makes him, hypothetically, the best in baseball that year); and 10 runs on baserunning, which is also tops; and 60 runs at the plate, which is, yes, also the league’s best. That’s 90 runs of value, and that’s the best player in baseball.

Now flash ahead five years. He’s now only half the defender he was, so 10 runs. And he’s only half the baserunner, so five runs. But he’s grown into a much more powerful hitter, a home run hitter with a good eye and bat-to-ball skills and, because of all this, he also draws more walks from cowed defenses. He’s now 33 percent better as a hitter, producing 80 runs at the plate. Add it up, and it’s 95 runs of value, and the best player in baseball.

Which guy is the better baseball player? We know (well, we basically know) which guy is more valuable. Ninety-five is bigger than 90, is more valuable than 90, and does more to help a team win than 90. But is that the same as better? Can you be better at baseball if you’ve gotten worse at two-thirds of it? Do WAR and WARP really tell us who the best player is, or can they take us no further than most valuable, skewed as they are by scale and irrelevant to matters of poetry and beauty?

I think Mike Trout was the most valuable 20-year-old ever, and I think this because of his total WAR(P). I think he was also the best 20-year-old ever, and this, to me, is a separate question. What made that year special was only partly the total value, but was largely how completely he dominated the game. I mean, I’m watching him cut this ball off, and it’s an absolutely nothing play and yet I can’t stop watching him run:

Remember, that was the year that Miguel Cabrera won the Triple Crown, which is history’s arbitrarily selected trio of mostly overlapping offensive statistics. What Trout nearly did was almost unthinkable: He almost won the Offense/Defense/Baserunning Triple Crown. I’m pretty sure I remember a day in August (though I can’t prove it) when Trout led the American League in WAR runs batting, WAR runs fielding, and WAR runs baserunning. If I’m making this memory up, I’m not far off, considering his final placement that year:

So he didn't quite win this version of a Triple Crown, but if you set some thresholds for a season—let’s say, 40 WAR batting runs, 10 WAR fielding runs, and 5 WAR baserunning runs, all of which Trout (53, 21, 10) cleared by plenty—you narrow your results down to just nine other players: Willie Mays, Albert Pujols, Alex Rodriguez, Mickey Mantle, Rickey Henderson, Joe Morgan, Craig Biggio, Jackie Robinson, and Ellis Burks. Henderson was 21 when he did it; no other player was younger than 23.

“There have been very few bad days in his life,” his dad, Jeff, told me back then. “That has served him well in a sport that’s so up and down.” But wait, Trout hadn’t been down hardly at all. “Relax, the 1-for-30s are coming. It’s a tough game for everybody.”

Many thanks to Rob McQuown and the Baseball-Reference Play Index for research assistance.

You need to be logged in to comment. Login or Subscribe
therealn0d
Just about anytime Mike Trout's name comes up I can't help but think of this player comment from one of the BP annuals (paraphrased here):

"Very few players burst on the majors as fully-formed Hall of Famers...it was clear almost right away what kind of player he was, which is why so many people expressed disbelief: They were seeing a player who, if he never grew, if he never peaked, if he just stayed right where he was, was going to be an annual MVP candidate."

The reader can probably guess which player the comment is about.
Reply to therealn0d
apbadogs
Pujols?
Reply to apbadogs
therealn0d
That's a bingo!
Reply to therealn0d
frankopy
the fawning over trout is ridiculous...the game has had dozens of players christened with the "can't-miss" soubriquet over the years; it's just that the names were penciled in...not virally displayed
Reply to frankopy
therealn0d
You must be a very hard person to shop for. The kid has a career line of .305/.395/.545 line through age 22 (three full seasons), 98 HRs, 102 SBs, two second place MVP finishes, one 10 win season and two nine win seasons. It's not fawning, it's recognition.
Reply to therealn0d
isaak11
I bet you're fun at parties.
Reply to isaak11
riverz
This was a fun read and I enjoyed it.

I do want to point out that Trout got sent to AAA partly because he had a really nasty case of the flu during Spring Training and it put his preparation for the season back a couple weeks.
Reply to riverz
Mario66
If I'm reading BB-ref's stats correctly, here is the 1987 WAR triple slash line for the constantly overlooked Eric Davis: 40/11/8.