We are here today to announce the winners of the 2014 Greg Spira Memorial Internet Baseball Awards, an annual tradition unlike many others.

At the end of every season the Baseball Writers’ Association of America announces the winners of their MVP, Cy Young, Rookie of the Year, and Manager of the Year awards. It's the time of year in which the feats of those who awed us throughout the season are told and retold, packaged and repackaged, hyped and then hyped some more. The greatest players' greatest seasons are seared into our brains like the sweet charred deliciousness they are.

In that spirit, or perhaps the opposite of it: Prior to revealing the voting in each category, I am including a moment from each winner’s career in which things were not so… glamorous. I could tell you this is because there’s something about the incongruity of putting (one of) the lowest moments of someone’s career next to what is likely their crowning achievement (the season, not the IBA necessarily), but the reality is that I’m a petty man-child who wants people brought down to my level.

So enjoy the videos, the GIFs, the pictures, but also: Enjoy the results of your voting. We're proud to have a process that delivers satisfying, democratic results every year. The further into the past a baseball season sinks, the more we remember each year as "The One When [Awesome Player] Did [Awesome Thing]." Votes like these, awards like these, really are the punctuation of a season. Punctuation is important. Punctuation is what makes this sentence so exciting!

AL Player of the Year
It’s Mike Trout. You knew it was going to be Mike Trout because you internet nerds love him, even though Miggy should have won again. His team played in more playoff games and YES THAT MATTERS. Also, you are all “Trout is so much better on defense, though.” Yeah, well:

I want a slow motion GIF of that as my desktop background.

AL Rookie of the Year
Jose Abreu was an unknown to most of us a year before his big-league debut, but he certainly made himself known to this phone box. NL Player of the Year
It’s not often that pitchers win MVPs, and while Kershaw is poised to do so this year, he’s already won MVP in our minds and souls. But not in the playoffs. Never the playoffs. MadBum4Lyfe. It’s really difficult to find footage of Kershaw doing bad things or even just falling down like an oaf, even if he is mostly a gangledoof. To that end, this is what I could find:

He threw the pitch that started that whole fiasco, so it’s his fault. Also that part at the end of the play where he tries to get Hanley’s throw but fails miserably. He must reflect on the four to six moments of miserable failure in his life often.

NL Pitcher of the Year
So, again with the difficult-to-find Kershaw moments, but here’s him attempting to knock an apple off Jimmy Kimmel’s head.

Not even close. I bet the hitters are embarrassed they let this guy get them out.

NL Rookie of the Year
Jacob deGrom beats out Billy Hamilton rather handily, which is the right outcome. Not an insult to Hamilton’s season, but deGrom was the better player. Both represented quite well. If there's a surprise, it's the support for Ender Inciarte over some of the other options. Nevertheless, you’re here for deGrom doing something stupid or goofy and I’m sorry to say I can’t deliver. When I tell you that this here internet does not want to make deGrom look bad, I meant it. The best I can offer is this: 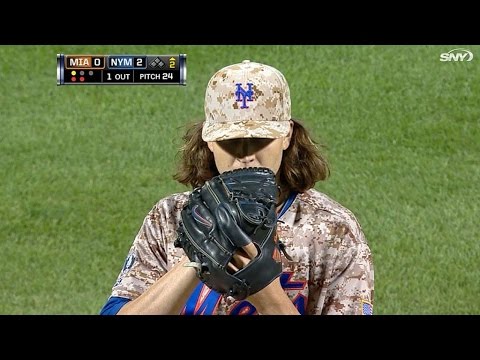 The camo is bad, the hair is bad, and worst of all—he’s playing for the Mets. Huge gaffe on his part. I’m still laughing.

NL Manager of the Year
And the NL MoY goes to the purplest one of them all.

Thank you for indulging me on my petty whims, as I attempted to give these players/managers their due, along with a dose of humility. And thank you for voting in the IBAs if you did so. It’s a community effort and we appreciate the time and thought that you put into your ballot, except for those of you who voted for Scott Atchison. Stop that.

Now, in the spirit of democracy, go into the comments and complain about how people voted.

You need to be logged in to comment. Login or Subscribe
KungFuMonkey52
Happy to see Donaldson place so high. I put him high on my list (3rd, I believe) but did so knowing that I am biased in favor of the A's.

I can't wait to see what this guy's future holds.
Reply to KungFuMonkey52
terencem
Crazy that Hurdle wins thanks to 2nd place votes. Should have sandbagged him, I guess.
Reply to terencem
TheArtfulDodger
More amazing to me is that Bruce Bochy was left off so many ballots. No issue with Hurdle winning, I just can't imagine Bochy not being top 3.
Reply to TheArtfulDodger
therealn0d
What a wonderful, strange comment.
Reply to therealn0d
seanqueue
Anyone want to lay odds on the one person who placed Bartolo Colon first on his NL Pitcher of the Year ballot being an actual member of the BBWAA?
Reply to seanqueue
Rockshu
I would strongly wager it was CespedesFamilyBBQ
Reply to Rockshu
KungFuMonkey52
I think I put him at the bottom of my NL pitchers list, throwing him a bone for his age. (That and I like watching the guy pitch. Quite a unique presence.)

First place is definitely silly.
Reply to KungFuMonkey52
TangoTiger1
Craig: can you add one column to each chart, and that is "Unlisted", meaning number of ballots where the player was not listed.
Reply to TangoTiger1
TheArtfulDodger
I'm going to look into this. I'm not sure if we track Unlisted votes. My specific comment was made just by seeing the total number of ballots for the top vote-getter and then subtracting the total from the guy I was looking at.
Reply to TheArtfulDodger
TheArtfulDodger
how about this? Here are the total ballots per award spot for each category:

It does seem like there are many squirrelly votes in the IBA balloting, even though the rankings among the top votegetters usually makes more sense to me than the BBWAA awards do.
Reply to Michael
davinhbrown
Soler who played, what, 5 weeks as ROY??


Guess some of these voters are just as hacked as the real ones.

Reply to davinhbrown
ofMontreal
Cubs rule!!!
Reply to ofMontreal
BurrRutledge
For some reason I'm in a sentimental state of mind this morning. Missing baseball, perhaps, and reflecting on much.

So first, I'd like to offer a toast to Greg Spira, who I never had the pleasure to meet, but whose IBA is a lovely legacy for BP to uphold. And congratulations to the 2014 IBA winners and vote-getters, who each had remarkable seasons for (at least some of the) fans of the game.

Here's to baseball! Spring can't come too soon.
Reply to BurrRutledge
hyprvypr
I think Felix is a virtual lock to win the actual Cy Young.
Reply to hyprvypr
flyingdutchman
I love that JD Martinez took #20 in the AL Player of the Year category. He's probably the only one who saw that coming back in March.
Reply to flyingdutchman