Remember that time when Buck Showalter was being lauded as an on-field tactician far superious to his opponents in the ALDS and ALCS? I do. Much of that praise was heaped on Showalter for his deft use of his bullpen, putting guys like Andrew Miller, Kevin Gausman, Darren O’Day, and Zach Britton in high-leverage spots. Before we go anointing Buck the bullpen whisperer, we should take a look at this: 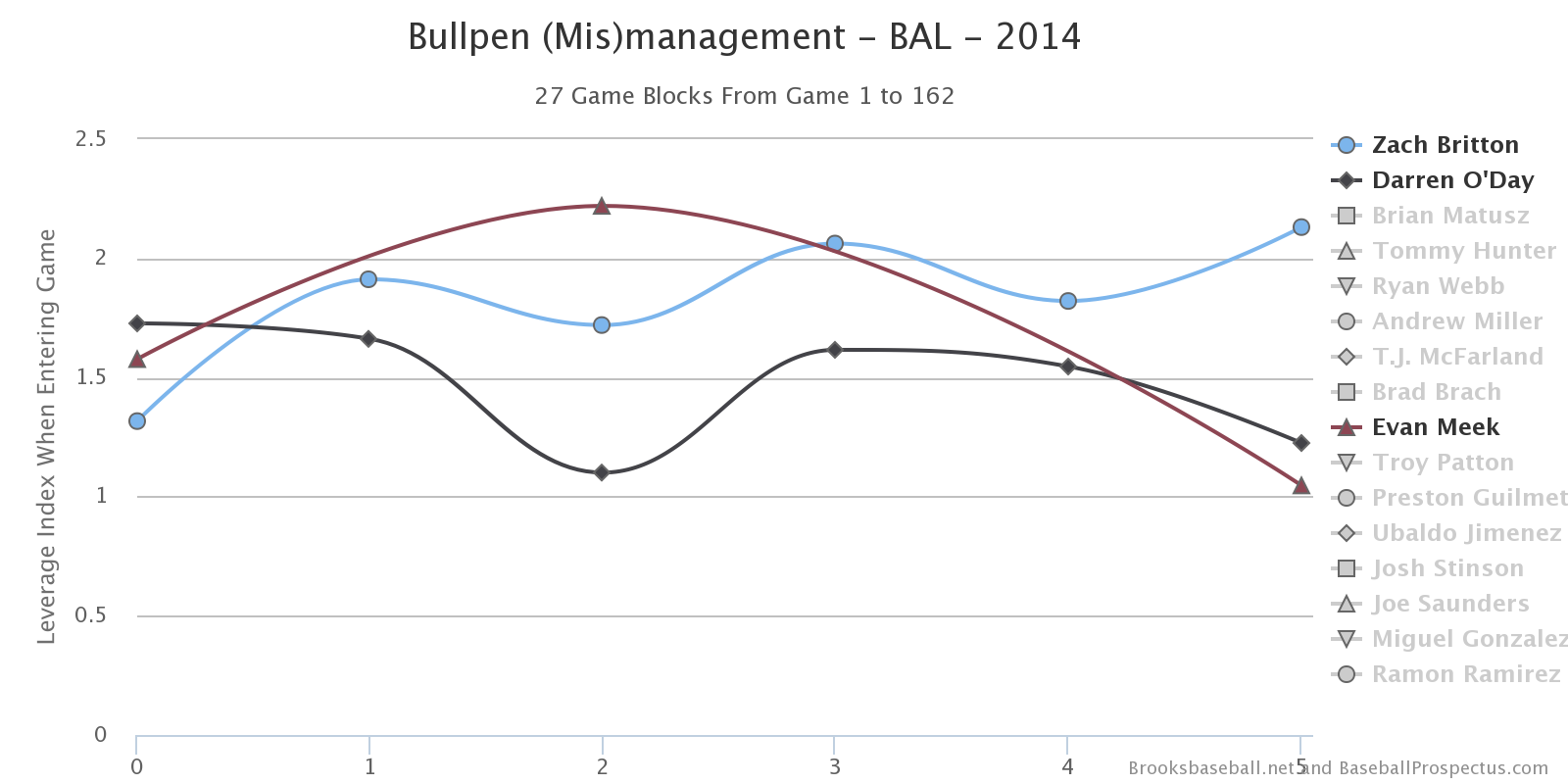 That red line there, the one with the triangles, is the average leverage index upon entering the game (inLI) for Evan Meek. Through the first half of the season Buck utilized Meek as if Meek was an elite reliever, comparable to the likes of Darren O’Day or Zach Britton. The apparent reason: He had a good spring training. Buck was raving about him throughout March and April.

Over the course of the 2014 season though, Meek ended up being the worst reliever to pitch for the Orioles by RE24, posting a -6.25 figure. It took Buck an awfully long time to realize that Meek wasn’t one of his elite relievers. Throughout this post we’ll be looking at the 2014 season to see if, in hindsight, a handful of managers were good or bad at using their best relievers in high-leverage situations. To do so we’ll be using RE24 to ascribe value to relievers, and compare the top performers on each team by RE24 to the pitchers used in high-leverage situations most often. It’s important to note that since RE24 is a kind of counting stat, pitchers who throw more innings have more opportunities to accumulate positive or negative RE24. That doesn’t mean they will post a higher/lower RE24; over time we’d expect their performance to regress toward a reasonable projection for their performance.

There are a ton of caveats to this analysis that I’d be remiss not to address up front. Obviously, MLB managers don’t have the benefit of knowing what a reliever’s RE24 is going to be at the end of the season when deciding who to bring in for the eighth inning of a tight game in April. Additionally, there are many more factors going into a manager’s decision of who to bring into a game than just performance—matchups and health and the previous day’s workload. Hopefully, by using 27-game segments we’ll see most of those nuances come out in the wash. (Next week we’ll be taking a much deeper dive into the factors at a manager’s disposal when making these decisions.)

For now, though, we’ll simply be looking back given everything we know now, and use our future knowledge to heap praise and side-eyes on the April-October versions of some of our favorite MLB managers.

Fredi Gonzalez – Atlanta Braves
Gonzalez struggled to use his best relievers in the “proper”—we’ll get the scare quotes out of the way now, to acknowledge that words like “proper” or “right” or “wrong” are blunt and unnuanced; we’ll use them but without extreme judgment attached—situations all season long. Sure, Craig Kimbrel was always used in the highest leverage situations, but that’s easy because Kimbrel is one of the best relief pitchers in baseball. Once we get past his relief ace, Gonzalez struggled to use his pitchers in appropriate situations.

Anthony Varvaro was by far Atlanta’s second best pitcher when it comes to RE24. Unfortunately, he ranked just fifth among Braves’ relievers (with at least 15 IP) when it came to the leverage of the situations brought in for. Chasen Shreve was another guy who was criminally underused, but a portion of that is understandable, as 2014 was his first taste of MLB action. On top of that, there’s a chance that Shreve wouldn’t post such a sparkling RE24 over higher-leverage innings.

The bigger issue is that David Carpenter was used in more than 60 innings with a relatively high leverage index when he entered the game (1.14 – third-highest on the team) despite being a below-average pitcher based on his RE24.

Varvaro was the second best pitcher on the Braves and yet over various 27-game spans during the 2014 season Gonzalez used Carpenter, Jordan Walden, Luis Avilan, Shae Simmons, and Alex Wood in higher-leverage situations. The chart below shows the average leverage index for each of the pitchers listed above when entering the game: 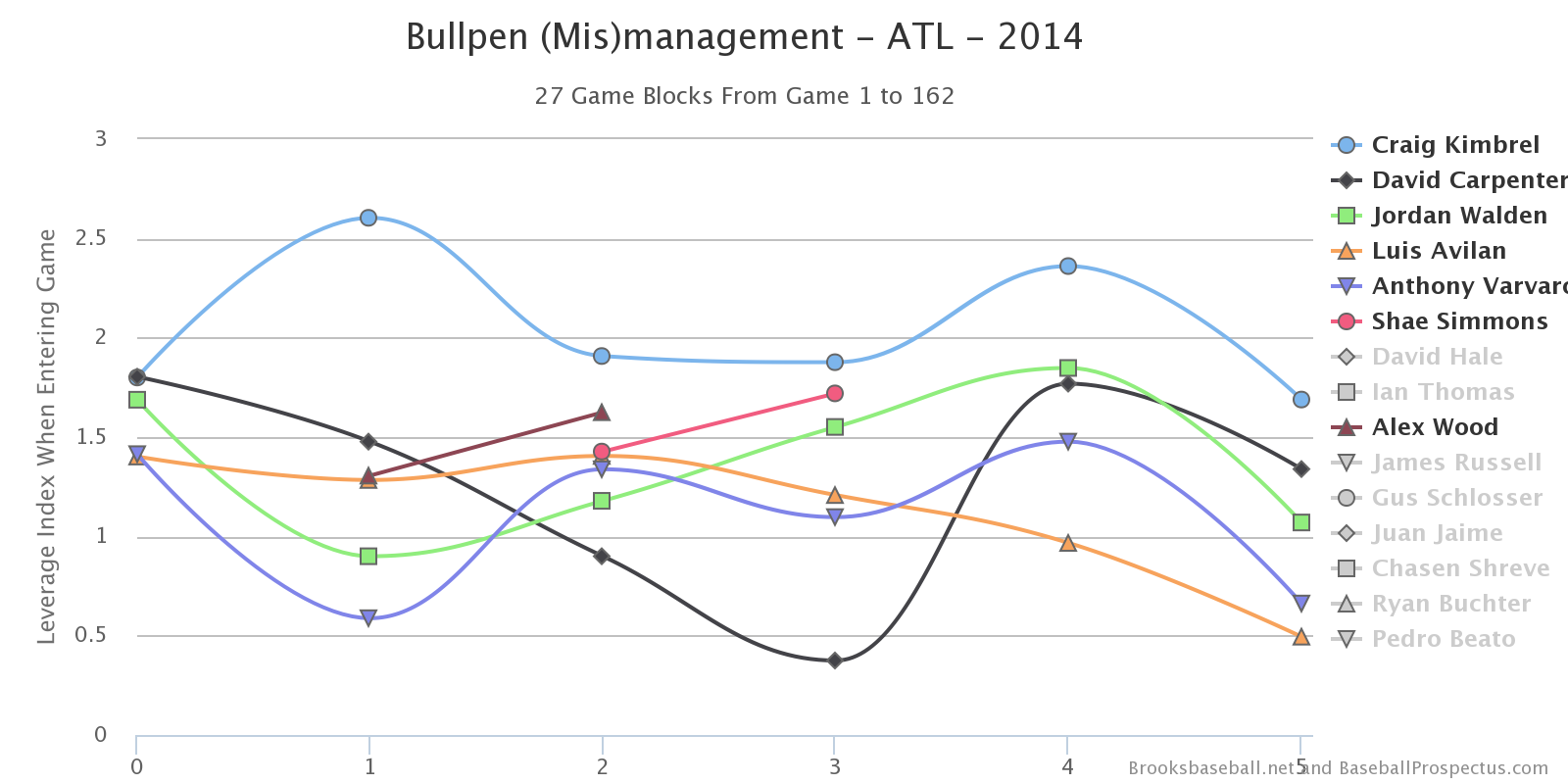 It’s pretty clear that Varvaro, despite being perhaps the second-best reliever on the team, is generally at the bottom of this pecking order. This holds true, even late in the season when it should have been clear that Varvaro was one of the better relievers on Gonzalez’s staff. Fredi Gonzalez isn’t exactly the most popular manager in baseball among his own fans, and this sort of thing won’t endear him to those who haven’t thrown him under the bus just yet.

Robin Ventura – Chicago White Sox
Ventura is, in many ways, the polar opposite of Fredi Gonzalez. He did a terrific job using his relievers in ways that got the most out of their talent, while adapting to changes that he noticed over the course of the season. Before digging deep into that, though, let’s take a look at the raw stats for Ventura’s relievers:

To be clear, Ventura has not had it easy when it comes to his bullpen. There are 20 names on that list, including a few position players, but it’s clear that Ventura worked well with what he had. Only four of those pitchers posted positive RE24s this season, and only three of them were worth writing home about. So Petricka, Carroll, and Putnam were the best options that Ventura had. Just by looking at the numbers it might seem that Carroll was misused, but let’s take a look at the biggest names on the table above over the course of the season: 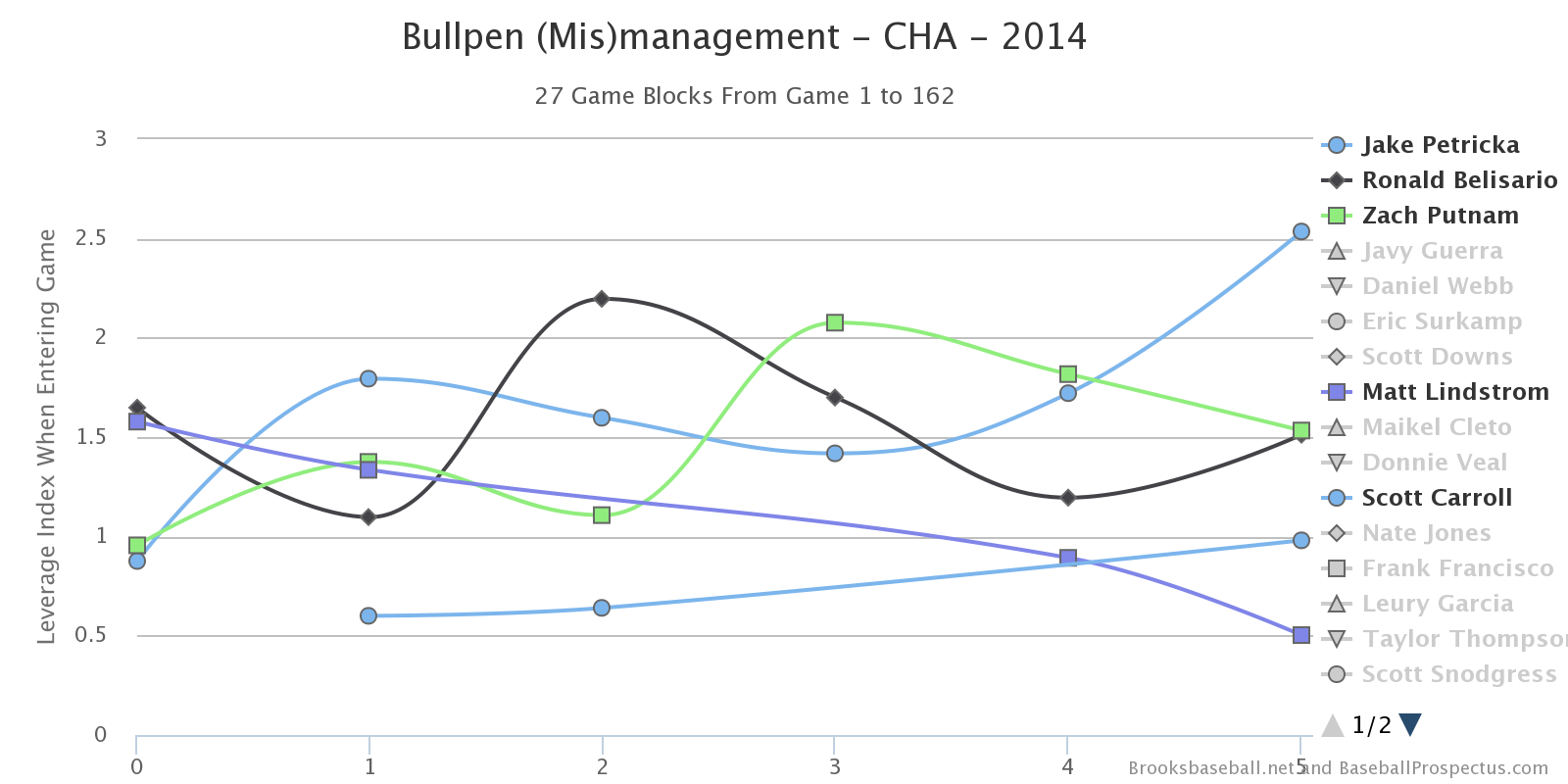 The first thing worth pointing out is the contrasting uses of Lindstrom and Carroll as the season went on. Carroll, who made more than a few appearances as a starting pitcher in 2014, saw the average leverage index of his appearances increase as the season went on, as he proved himself to be invaluable in a bullpen role (.292 wOBA against as a reliever vs. .364 wOBA against as a starter). Lindstrom, on the other hand, has a long track record of success as an MLB reliever. However, his 2014 campaign was dreadful, and Ventura would decrease the importance of his outings over the course of the season.

Ronald Belisario was the highest paid reliever on the White Sox staff, and he started the season out well enough as a valuable pitcher for Ventura. He began to struggle in June and subsequently saw his usage in high-leverage situations decrease. Ventura didn’t seem to be fazed by Belisario’s price tag or veteran track record in essentially demoting him from that high-leverage work.

Correspondingly, the average leverage of Putnam and Petricka increased as the year went on and they proved themselves at the major-league level. Ventura wasn’t afraid to use Putnam or Petricka, neither of whom had more than 20 MLB innings prior to 2014, in high-leverage situations.

It’s easy to look back, with all the information we have at the end of the season, and critique any manager’s use of his bullpen. While it might not be fair, because the managers didn’t have all this information at the time of these decisions, it does give some insight into which managers are more in tune with the performance of their bullpens. Or were, for a year. Where Fredi Gonzalez struggled to adjust to the variable performances put forth by his relievers, Robin Ventura was able to consistently put his best relief pitchers in the most high-leverage situations.

There are many aspects of being a good manager; bullpen management is one of the more visible ones. Quantifying some of those other aspects is a difficult and worthwhile task to undertake, as Russell Carleton showed earlier this week. As more of those areas are explored, it will be important to build on a foundation of the more easily quantifiable bullpen management.

Thanks to Dan Brooks, Neil Weinberg, Russell Carleton, and Sam Miller for their help with various components of this and next week’s articles.

Awesome stuff.
Reply to tannerg
stevenst
Yeah Awesome stuff. Will you be continuing this article for every team? It's great information.
Reply to stevenst
BSLJeffLong
Todd, I wasn't planning on it - but if you shoot me an email I'll be happy to do it for a handful of teams.

Next week the plan is to dive deeper into the decision making itself.
Reply to BSLJeffLong
rawagman
This stuff could/should be part of the manager section of the next annual.
Reply to rawagman
newsense
Showalter used Meek as his primary set up guy because the Bible says, "The Meek shall inherit the Eighth."
Reply to newsense