One of the statistics bandied about with great frequency in the World Series coverage has been the Giants' collective proficiency against the fastest of fastballs (typically defined as more than 95 mph). On several occasions, broadcasters have mentioned that the Giants hitters do well against these pitches, both as a team and with reference to particular individual players. The tenuous conclusion to be drawn from these statistics is that the Giants will continue to do well against the blistering heat, including those fastballs wielded by such prominent Royals as Yordano Ventura and the Reliever Triumvirate.

As many have noted, the stats as presented on the broadcast are terrible, for a bevy of reasons. We can start with batting average, which I probably don’t have to tell you is not a very good index of a hitter’s skill or outcomes. We’d like a better metric, ideally something that included the value of plate discipline (walks are valuable, too!).

There’s also the little matter of how the statistic is computed. As it turns out, the reported numbers come from at-bats in which a player saw a 95 mph fastball. So the hits need not even be recorded against the 95 mph pitch itself, but could instead come against another pitch later in the at-bat. The occurrence of the heat could be merely incidental. To focus on the fastballs specifically, we’d need to use some kind of per-pitch metric.

Finally, "95 mph pitches" is something of a tenuous category. For one thing, it’s an arbitrary distinction: Pitches don’t suddenly become “slow” at 94.99 miles per hour. Additionally, there are simply too few of these pitches (only ~10 percent of all balls thrown) to make robust conclusions about them with a blunt metric like BA, especially since the pitchers who throw so fast also show other, confounding characteristics. That’s doubly true with regards to these statistics as applied to individual players.

As a result of these flaws, the much-mentioned statistics regarding the Giants' response to heat are all but useless. Still, it’s not inconceivable that some of the Giants hitters really do show some special skill against the fastest fastballs. It’s just that we’re not going to get at measuring that skill with a poorly assembled query capped off by an obsolete statistic like batting average.

Instead, let’s try to fix the Fox broadcasters’ folly by testing whether the Giants hitters really do better than expected against heat. Because quantifying performance against an individual pitch type is something of a tall order, I’ll try to apply several different, complementary approaches. In this way, we ought to get a better idea of how the Giants fare against the most scalding fastballs.

Method 1: Whiffs/Swing
A simple way of measuring a hitter’s performance at the per-pitch level is by looking at the hitters’ whiffs. Beyond being embarrassing, whiffs tell us that a hitter is struggling, having been fooled by the location or timing of a pitch. There’s no upside to a missed swing; it’s a purely negative play.

Unsurprisingly, the faster the fastball arrives, the more likely the swing is going to miss, a result of the batter struggling to catch up to the pitch. 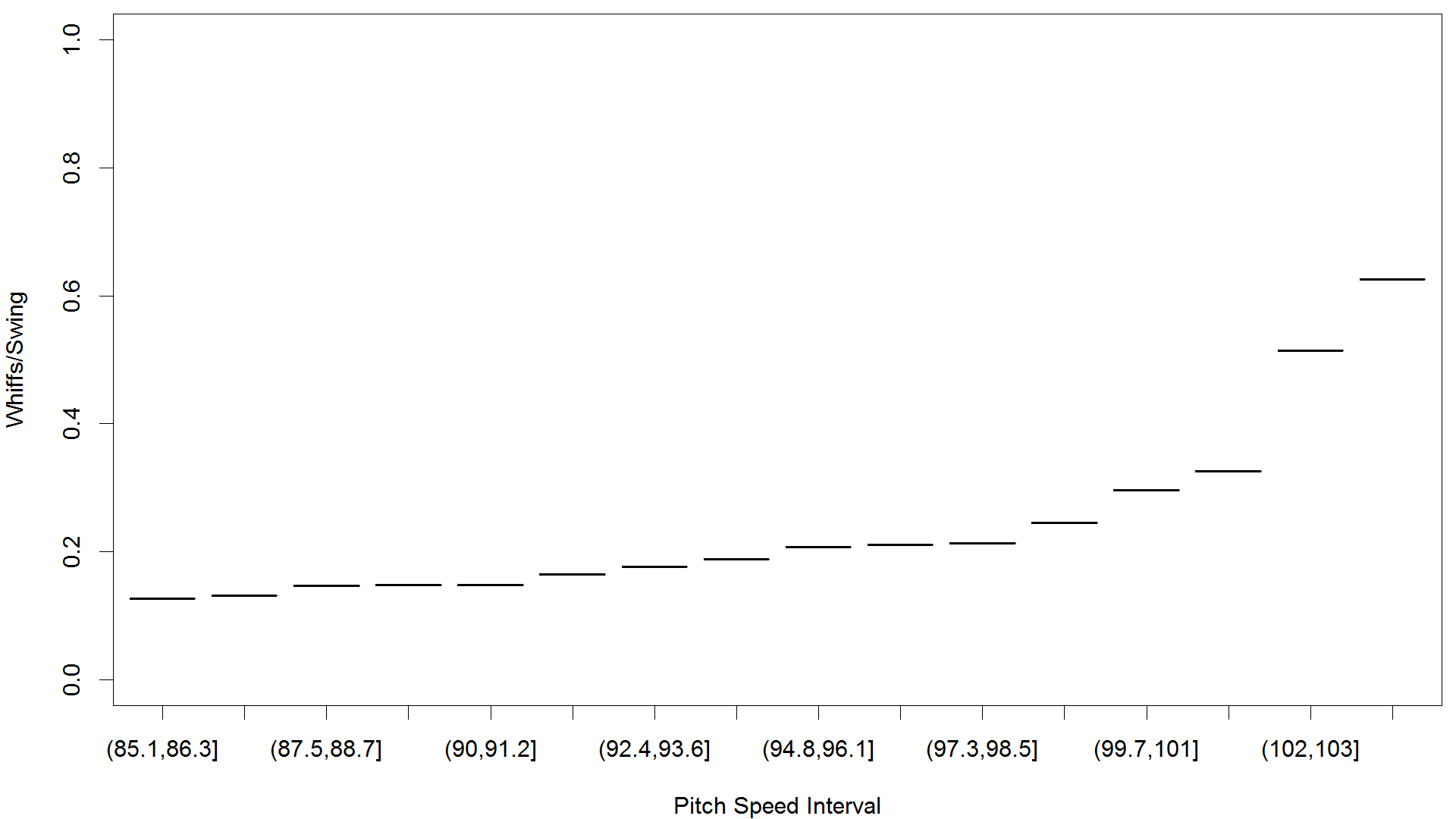 Against all four-seam fastballs, the average whiff rate for 200 MLB regulars in my dataset is 16.9 percent. The average for Giants hitters is three percentage points higher, at 19.9 percent. Against 95 mph+ pitches, the MLB average is considerably higher, at 19.5 percent. In comparison, while the Giants increase their whiff rate as well to 21.5 percent, the gap between the Giants and the rest of MLB in whiff rate declines substantially. A couple of Giants (Brandon Crawford and Pablo Sandoval) even perform better against the higher velocity stuff, dropping their whiff rates.

Preliminarily, the whiff rate data supports the idea that the Giants have some special skill against high-velocity pitches. They whiff more against those throws, but their disadvantage is less than that incurred by the average MLB hitter.

Method 2: Per pitch linear weights
Whiffs are a decent indicator of performance, but they don’t tell the full story. Only about half of all pitches are swung at, and a big part of hitting is making the decision, to swing or not to swing. On the majority of occasions in which contact is made, a big part of a hitter’s skill is how well he drives the ball. To get a more full picture of how a hitter performs, we can look at pitch linear weights.

The idea of pitch linear weights has been more fully explained elsewhere. In brief, we assign a positive or negative value to each pitch, depending upon the value, in runs, of the outcome (including the manner in which it changes the count). The specific value is calibrated by examining the historical record of how many runs went on the board in similar situations.

The league as a whole averages -.0015 runs/pitch, -.0025 against fastballs. Against the fastest pitches, that number declines substantially to -.0049 runs/per pitch. That’s as good a sign of the importance of velocity as anything. The mere act of sending the pitch to the plate at such speed reduces the run expectancy quite substantially.

The Giants are a different, strange story. There are some good hitters in the Giants lineup, and so they put up a sterling .0034 runs/pitch mark against all pitches. But against pitches at 95 and above, they do barely any worse, at .0033 runs/pitch.

The best hitter on the Giants against the fastest pitches is Hunter Pence, at .0159 runs/pitch, an incredible mark. Undoubtedly, there’s some error associated with this number, but an advantage of using a per-pitch metric is that we have considerable sample size. Pence alone, for example, has seen more than 250 pitches faster than 95 mph, so while we can quibble about how good of a fastball hitter he is, there’s no question that he has some serious plate discipline skill against the fastest pitches.

Method 3: Pitcher approach
In the third and final method, we can look at how pitchers attack the Giants hitters. Whereas the other two methods examined the Giants performance against a certain pitch type, this method infers their performance via their opponents’ behavior. Not all pitchers can throw 95+, so as a workaround, I’ll focus on the two most common pitch types which are thrown at high velocities: the four-seam and cut fastballs, which together make up more than 90 percent of the pitches thrown faster than 95 mph.

The advantage to this method is that major-league teams are doing the hard work for us. Scouts, front office analysts, and the players themselves all do extensive research against their opponents, and tailor their approach to their opponent’s strengths and weaknesses. If the Giants are particularly adept at hitting fastballs, then the opposition should have detected that strength and should be throwing them fewer fastballs as a result.

League average four-seam fastball frequency is 34.4 percent, but the Giants see only 32.0 percent four-seamers. Interestingly, opponents seem to make up for that by throwing a greater proportion of cut fastballs, where league average is 7.5 percent but the Giants see 9.8 percent. Since four-seamers are much more likely to be thrown at the highest velocities, this difference suggests a change in strategy, and perhaps an avoidance of the heater. Hitters like Hunter Pence and Buster Posey see the greatest drops in four-seam frequency, at four percentage points each.

I’ve examined three different approaches to measuring per-pitch performance. Each of these has its flaws, and each is incomplete in some fashion, but all three show the same pattern: The Giants appear to do better than expected against the fastest fastballs. A few hitters on the roster stick out with regards to this skill, including Hunter Pence, Buster Posey, and Pablo Sandoval.

Rather than it being any special impact of the Giants’ coaching or approach, it seems like the heart of their order is made up of a handful of great fastball hitters, who together discourage their opponents from throwing heat. With three different methods in agreement, we can have some confidence that the skill of the Giants is real. Even though the Fox announcers were employing a silly, outdated statistic to show the same pattern, they appear to have converged on the truth.

In practice, the magnitude of the Giants advantage against fastballs is sufficiently small that it certainly doesn’t much affect their odds against flamethrowers, or alter Yost’s in-game strategy to any appreciable extent. It’s an advantage, but a thin one: The Giants appear not to suffer as much as most teams, but still, they aren’t launching high-velocity fastballs into the outfield with any regularity. As it turns out, hitting 95 mph+ heat is never easy, not even for the Giants.

You need to be logged in to comment. Login or Subscribe
hortonjr
Robert, isn't it the case that the whiff data actually shows that the Giants are worse than the MLB average for the 95+ pitches (21.5% versus 19.5%)? Shouldn't the conclusion from this piece of the puzzle be something like "they are worse than average, but not as much worse than average as they are against all four seam fastballs", rather than your statement of "They whiff more against those throws, but their disadvantage is less than that incurred by the average MLB hitter". Or did I misunderstand completely? :)

That is to say: everyone does worse against 95+mph heaters, but how much worse do they do relative to their normal performance? My conclusion being that while the Giants whiff more, the magnitude of their performance deficit against 95+mph stuff is less than what it is for most players. Getting in the middle of that narrative is the fact that the Giants tend to swing and miss more on average, for whatever reason (even though they are an above-average hitting team).
Reply to nada012