Prior to the season, in a previous life, I made numerous fantasy baseball predictions. Some were (spectacularly) wrong, and conversely, some went quite well. Perhaps the more interesting discussion, however, centers on the predictions that were somehow both right and wrong. Because, at least in my mind, those are the predictions that best encapsulate the experience of fantasy baseball. You can have stellar process, nail your projections, and still come up short. 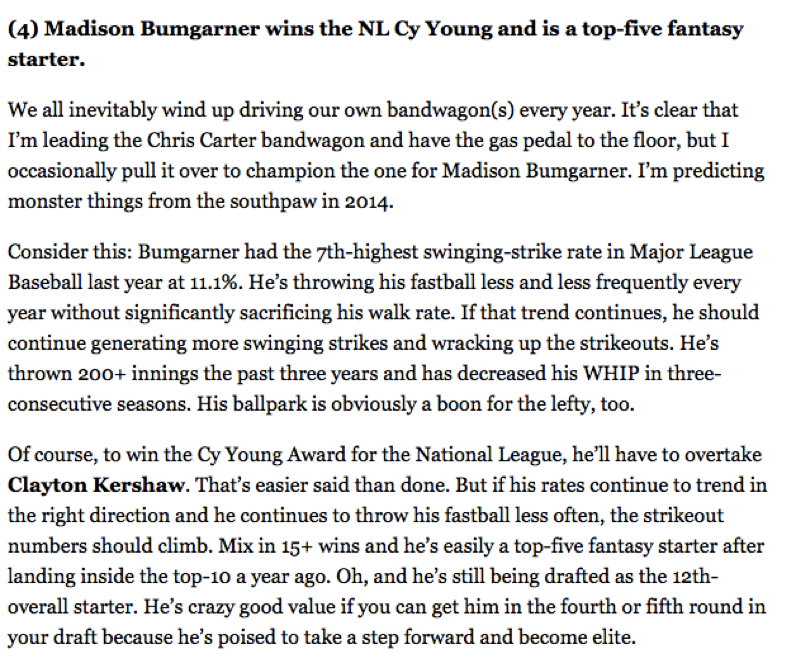 As I said, we all choose our own bandwagons to drive every year—my Chris Carter infatuation is a story for another week—and I opted to forcefully lead the charge for Madison Bumgarner. I pointed to several positive trends that hinted his above-average performance could progress in 2014 and become truly elite.

Bumgarner did do much of what I indicated. He threw his fastball a bit more than he did in 2013, but his fastball-usage percentage (43.5) still ranked as the 10th-lowest in Major League Baseball. His heightened swinging-strike rate remained steady at 11.1 percent. His walk rate dropped to just 4.9 percent, which was a career low. He also generated more swings at pitches outside the strike zone for the fifth consecutive season, as illustrated by the chart below.

In fact, his 36.2 O-Swing% was the eighth-best in baseball, even ahead of guys like Corey Kluber, Chris Sale, and Felix Hernandez. More swings at pitches outside the zone, an increased strikeout rate, a steady swinging-strike rate, and a decreased walk rate: That sounds like the makings of a Cy Young season, does it not?

The first issue doesn’t need to be explored very much. Kershaw compiled a tremendous season, and if it weren’t for the early-season injury, the southpaw would’ve put together one of the best seasons for a starting pitcher in the Live Ball Era. At just 26 years old, he became just the sixth qualified starting pitcher to post a sub-2.00 FIP over the course of a single year. His 1.81 FIP ranks behind only Pedro Martinez (1.39 in 1999), Dwight Gooden (1.69 in 1984), and Bob Gibson (1.75 in 1968). So, yeah, the NL Cy Young isn’t going to anyone else. Kershaw dominated.

On the other hand, how did Madison Bumgarner improve in many significant ways, yet see his overall run prevention get worse?

Most notably, his BABIP increased from .251 in 2013 to .296 this season. In retrospect, I should have projected an increase in BABIP, as it was significantly below his career average and was due for a significant uptick. Bumgarner’s home-run rate also increased from 0.67 HR/9 a year ago to 0.87 HR/9 this season, so that influenced his run prevention as well.

However, I want to focus on the BABIP for a moment. The very nature of BABIP highlights the fickleness of projecting performance in baseball. All anyone is doing is making educated guesses. Granted, the more educated your guesses can be, the better and more consistent you’ll fare in your fantasy baseball league(s). But ultimately, we’re dealing with situations of random fluctuation and unexpected development/regression. The trick is to not let the randomness detract from trusting your quality process in the future. We talk about being process-driven all the time in real-life baseball, but it’s no different in fantasy baseball. Trust yourself, learn from your mistakes, adjust the process, and trust it again the following season. Hopefully, fantasy baseball championships will follow.

You need to be logged in to comment. Login or Subscribe
kvamlnk
A fantasy prediction that includes the Cy Young award is a bit over the top. I doubt that anyone took it seriously - it gets chalked to poetic license and Internet hyperbole.

Placing Bumgarner 5th was actually reasonably close, at least for my league using the PFM to evaluate the stats. Of the top tier pitchers (BP tiers 4,5,6) he finished 7th, but quite close to #5, Jordon Zimmerman. There is a very long list of pitchers who did worse. Unless someone drafted Bumgarner ahead of Kershaw or Fernandez, they should be pretty happy with your advice.