This was such a thumping that it’d be silly to make too much of the little things. So the big things: James Shields was missing his targets; the Giants couldn’t be beat by anything he threw hard; they jumped out to a comfortable lead, knocked Shields out, then coasted behind Madison Bumgarner in a game that resembled more than anything the NL Wild Card game. Danny Duffy finally appeared, and a reporter in the press box fell asleep. The Giants played well, the Royals played terribly, and this game wasn’t close.

On Tuesday, Jeff Long wrote a piece about what to plan on if you’re facing Bumgarner. It was a tremendously granular guide to Bumgarner’s tendencies in each situation—“there’s an 80 percent chance the first pitch you see as a lefty will be between 88 and 94 mph and in those nine zones ranging from the heart of the plate to off the outside corner,” that basic idea. That’s very helpful information! Until Madison Bumgarner tries to absolutely screw with you.

1. Nothing but fastballs, elevating it as a putaway pitch in a situation where any other pitcher would be bouncing breaking balls: 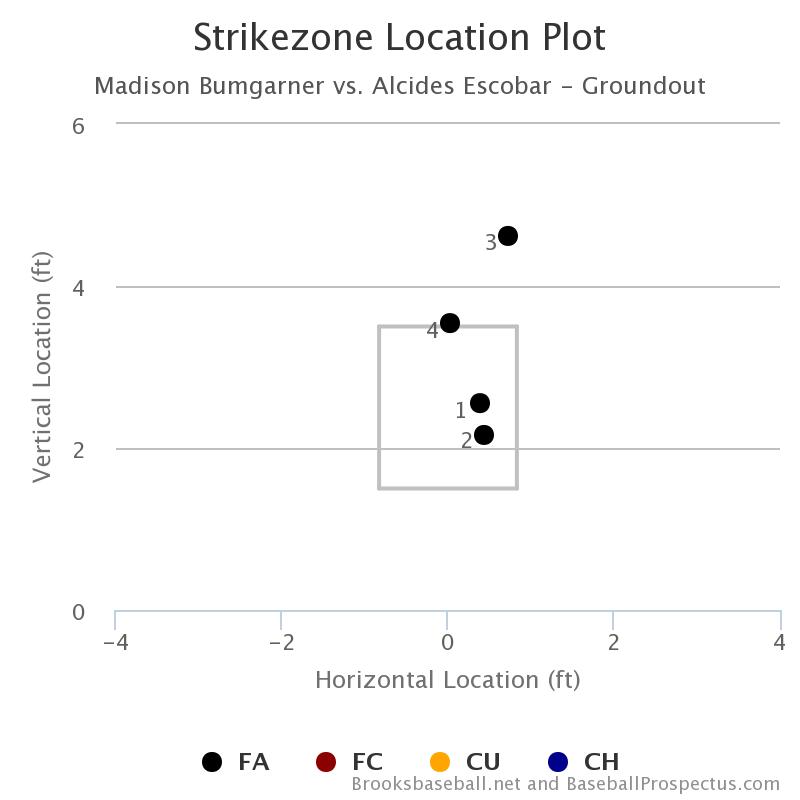 Here Escobar grounded out. The same basic strategy worked the next time, when Bumgarner did strikeout Escobar with a runner on third and none out.

2. Practically all wrinkly, to a right-handed batter, with the curveballs getting ahead in the count and one fastball up as a two-strike option: 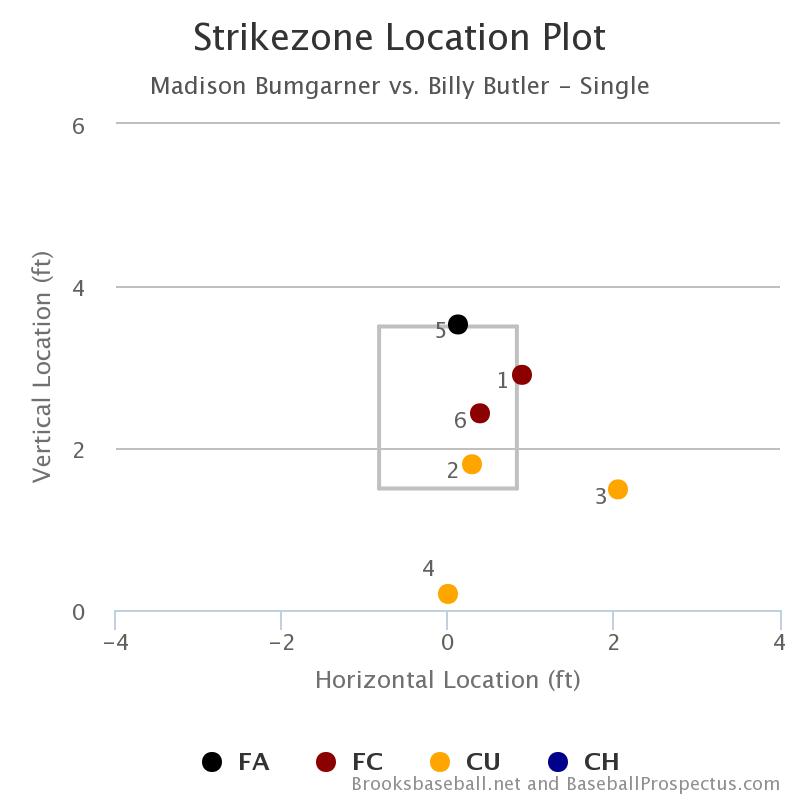 3. Fastballs and cutters off the plate, followed by something that you can't see in the plot below 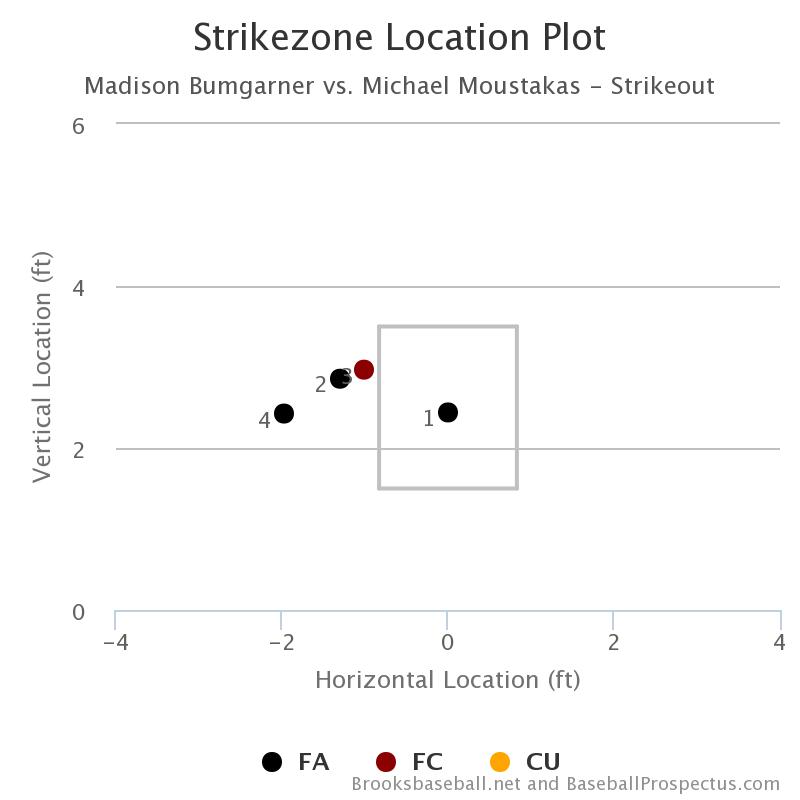 There’s a passage in Jeff’s piece that is especially fun in light of that:

We can basically cross out the slow curve; he threw only 19 this year, including three in the playoffs. If Bumgarner beats you on a pitch he’s thrown once every 10 innings, you tip your cap, you head back to the dugout, you stare vacantly into space for three minutes. For everything else, we build a plan.

He threw two in the game. Moustakas might still be sitting in the dugout and staring into space.

In the preview of this series, I wrote something that felt true but that I hadn’t really tested. It went like this:

It is, however, worth pointing out that the Royals are built to be a team that is very good when it is already ahead. It plays good defense that gets better late in games with the lead; it has three excellent relievers who come in with a lead. What we've seen has been what the Royals look like when they lead, and it's great. What do they look like when they trail? Well, there's nobody good on the bench, there's not really a home run threat in the lineup, stealing bases down by three ain't the life for me, and the bottom of the bullpen is just okay.

My point was that we have a very skewed view of the Royals if we’ve only really watched them in this October run. It’d be like watching those old Rockies teams only at home, or listening to Jeff Lynne only when he’s surrounded by Wilburys. But is it true?

We can test this pretty easily. Using the Play Index at Baseball-Reference, we can see how often the Royals won based on whether they were ahead or behind at the end of each inning. We also know the league-average rates of same. Is it true?

Here’s how often the league overall and the Royals won this year when they had the lead at various stages of the game; each level marks the end of the inning in question:

Still better than a typical team, but not by as much. Now, if you look at the Royals’ runs allowed per inning, you’d see that their pitching has been especially bad (compared to the league overall) in the third, fourth, and fifth, which is why you see the little dip (relative to the league) in those innings. And in the ninth, they’re sort of limited by the fact that most teams win most of the time when they lead in the ninth. But it’s pretty clear that when they get a lead, they’re not just likely to win—all teams are—but that they have actually played like a better team.

When people try to explain the Royals’ postseason success, they’ve tended to point out that the postseason allows them to lean even harder than usual on their exceptional 7th/8th/9th inning guys; if their three best relievers are better than your three best relievers, and it becomes a contest of each team’s three best relievers (as the postseason often is), then they’re disproportionately skilled for the situation. As Ben Lindbergh (and others) have shown, an exceptional bullpen doesn’t actually seem to correlate to better-than-expected postseason success. But what we’ve seen with the Royals is stronger than that: It’s not just that they get to lean on their best relievers more in the postseason, like any other team, but that they get to lean on their best relievers more than expected because they’ve been leading all the friggin time. Really: Before this game, it’s not just that they had won eight games in a row; they had trailed at the end of only six individual innings in the entire postseason. Most of those came in the wild card game, a narrative buster and by far the least representative of the Royals’ actual style and abilities. Otherwise, the entire postseason has been scripted to let them put their best strategy into play.

So on Tuesday we saw what happens when the script presents a complication. Now, this game was exceptionally lopsided, and I’m probably not going to be able to show you a lot of examples of “this happened because they trailed, whereas this other thing would have happened if they had led.” But the characteristics of the Royals became a bit less charming. They drew one walk—no surprise, as they walk less than any team in the league. They didn’t flash that electric speed—how could they, down by multiple runs? With no reason to steal, Alcides Escobar was stationed on first base in the eighth—thus setting up the groundball double play that Nori Aoki hit into. They didn’t hit any home ru—okay, they did hit a home run, but except for a failed rally in the third, you never really felt like they were capable of putting up a crooked number. “Now’s the time to start chipping away,” Harold Reynolds said at the start of the sixth, which was a depressingly accurate assessment of the Royals’ offensive limitations.

And instead of Jarrod Dyson coming in to play defense, we watched Norichika Aoki misplay a Joe Panik ball into a triple in the seventh. That inning had begun with a walk, which scored on the triple, because instead of Kelvin Herrera pitching “his” inning we saw Danny Duffy trying a fourth frame and Tim Collins coming in to show everybody how skinny his platoon split is.

Anyway, one game is not a picture of a team any more than—actually, 87.5 percent less than—eight games are. And, to call BS on the whole part about Dyson/Aoki: The Royals’ BABIP allowed from the seventh inning on was no different whether they were ahead or behind, not even on fly balls. But it should have been, don’t you see? It should have been!

Regardless, on Tuesday we saw the Royals that come out in a loss, and they’re just as much a part of the club as the ones who come out in a win. Next time I hear an announcer in this series talk about how important it is for some team to get ahead, I might not even SMH, SMDH.

Some 63 percent of Game One winners went on to win the title. I can tell you PECOTA likes the Giants chances better than that.

You need to be logged in to comment. Login or Subscribe
drawbb
Umm...Jeff Lynne NOT surrounded by Wilburys was pretty great, too.
Reply to drawbb
stevekantor
Ummmmm Jeff Lynne with The Move had many great moments, the ELO years had some high spots and a lot of drek.
Reply to stevekantor
oldbopper
I don't understand why Bumgarner only threw that slow curve 19 times this year. It looked like it couldn't have been hit with a cricket bat. If he uses it more often we might forget who that other lefty from the southern part of the state is and MadBum will be picking up the Cy Young one of these years.
Reply to oldbopper
matrueblood
Doesn't it strike you as an offering that only works as a very rare change of pace? Looks that way to me.
Reply to matrueblood
rweiler
Looks that way to me too as Bumgarner's arm action seems to be noticeably slower on that pitch. If hitters saw it often enough, they would recognize it. At some point, you would think that Bumgarner is going to have to throw more 'true' change ups with the same arm action that he has or his fastball. Despite the score, the Royals had pretty good swings on the fastball, but all of them except the double and the HR found a glove.
Reply to rweiler