Now, it would be easy to rely on silly stereotypes to draw a caricature of a fan base that rarely packs its park and that hasn't seen postseason baseball in three decades. It’d be easy to say that the Royals stadium scoreboard operators have to tell them how many men are on base 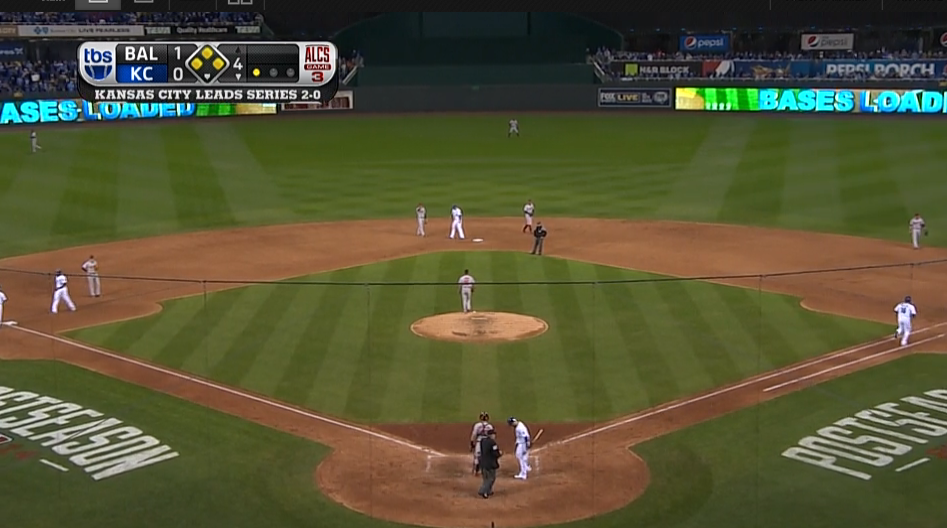 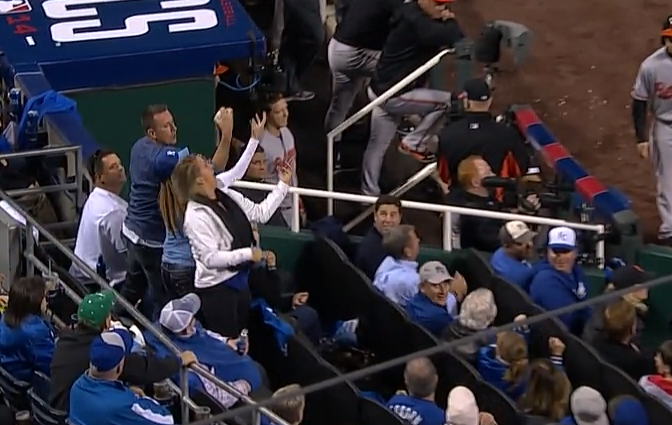 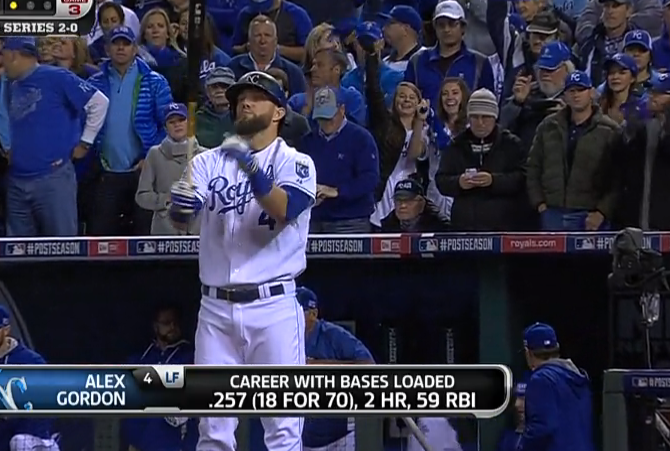 but I’m not going to do that. Anymore. Those silly screengrabs could be taken from any park. The truth is that the Royals have a swell fanbase. You might say the best in the state. The Best Fans In Missouri Baseball. You might just say that. Here’s what you need to know about them:

1. They’re the cutest kind of troublemakers

There’s these two kids on the left of your GIF, hunched down and conspiring. They want to distract the opposing pitcher by waving their big fake elephant ears while he’s throwing his pitch. But they know that would be bad. But it feels so good to be bad. But we can’t. Let’s! No! Nobody’s looking! Okay! Quick!

And they do it, literally after the pitch has been thrown. So cute, these little troublemakers who think they're breaking the rules even though they're not.

But okay that’s kids for ya. Kids think everything is against the rules. Everything is potentially against the rules if you’re a kid. When I was a kid I almost got suspended because I had a watch, which was not against the rules, but the teacher thought I was using my watch to control the classroom TV. I was not. It was a watch. My mom had to come down to the school to get me out of it, and when she was done, boy was there hell to pay at home, what with me and my watch having forced my mom to stop what she was doing and come tell my teacher that it was a watch. It’s healthy for a kid to be a bit paranoid.

But, now, watch the guys up at the top right—grownup in a green jacket, and the dude next to him:

You guys! That’s not against the rules! You can just do that. You can do it proudly and you can do it together, in front of everybody. We will support you. This is not 29 years ago. Two pretty cool dudes who just want to wave their arms at an opposing pitcher together is completely acceptable in 2014. In some states, even dinosaurs are allowed to do it.

First I thought that dude was a Juggalo—the Gathering has legit Missouri connections—but then realized, oh no, it’s just the Royals fans. Like this guy: He’s got a hand-made jokey-type shirt, like he’s expecting Rod Roddy to tell him to come onnnnn down: 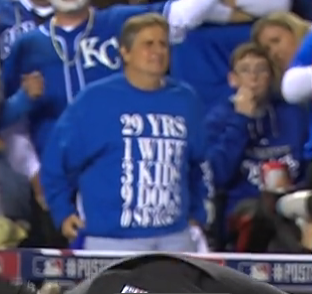 And the drumming Non-ja himself was back the next day in a different superrad get-up: 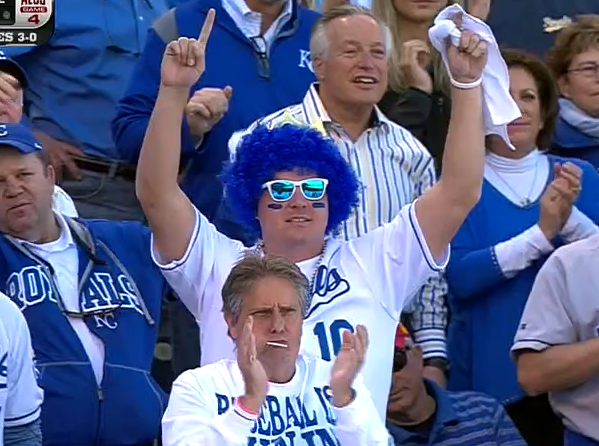 and fan signs are prone to excessive use of art supplies: 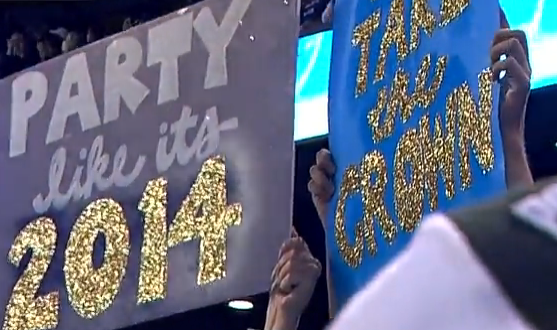 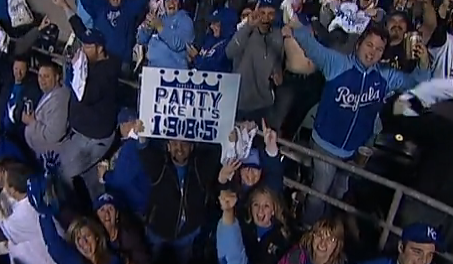 to model their partying after)

but what really cracked the case wide open was this guy: 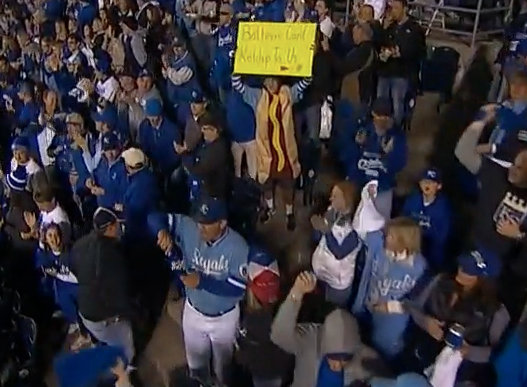 If you're generous, you could argue that the face-paint guy was just doing what he's used to doing at football games, the sport that has been ever, ever, ever so slightly more relevant to their municipal esteem over the past two decades. You could argue that the shirt guy just needed a shirt and found that one hanging from a plum tree, and doesn't know what's written on it anymore than some kid in some country far away knows what the "2013 World Series Champion St. Louis Cardinals" written on his t-shirt means. You could argue that the glitter signs might have been, uh, the result of a glitter accident. What you can’t dispute, though, is that a man dressed up like a hot dog, on purpose, to go to a baseball game, just to support an unnecessary, kindergarten-level pun. That’s begging-Wayne-Brady-for-$200 behavior, folks.

(Note also that the man standing in front of him is wearing not just a Royals shirt, but a Royals uniform, complete with baseball pants, baseball belt, and—presumably—baseball ennui.)

3. They are incredibly polite! And sometimes quite rude!

What appears to be a simple GIF is actually a complex personality test. Watch it, and I will tell you what you are like as a person:

What did you see? If you answered “A man coughing, but covering up his cough; thank God, what with ebola everywhere. If only more people were decent and considerate like him, maybe we wouldn’t have all this gridlock in Washington…” and so on, you are a type of person I’ll call optimistic with foregrounding tendencies; you take actions at face value, you are inspired by the simple decency of good manners, and you probably have an unrealistic understanding of the risk of ebola.

If, on the other hand, you answered “a poor woman (front left) is getting thwacked in the face by some thug with a rally towel,” you are the type of person known as pessimistic with a full-screen outlook; you see meanness as constant, and you rarely distinguish between intended and unintended violence, as the intent of an action is irrelevant to the risk of its consequences; you also have a pervasive phobia of rally towels, which, the Centers for Disease Control have shown, is more likely to spread ebola than a dry cough. You also have an unrealistic understanding of the risk of ebola.

4. Some people are different

What you have seen thus far are Kansas Citians. They are nice, aren’t they? Maybe almost too nice? Or maybe not too nice? Just nice. Not everybody who lives in Kansas City was born there, though. Some are from other countries; some are from other states; some are probably from Philadelphia. In the following, you can see, by the response to this upright Baltimore Orioles fan, the difference between natives and non-natives:

Every true Kansas Citian in the picture averts his eyes. Sure, they'll let you live your life however you want, but just because it’s your right to stand up like a moron and wave your stupid orange hate-rag doesn’t mean they're going to look at it. But there’s one hero, who I’m confident isn’t from Kansas City by birth, and she stares right the heck into that Orioles fan’s face and she shows him, with every cringemuscle God gave her, that he’s an ugly, foolish man who is making everybody feel embarrassed.

You don’t have to be a native of Kansas City to love Kansas City, is the point, I guess.

5. There are kid fans who have never seen the Royals in the World Series before!

Look at how upset this kid is:

You have to understand: He’s literally never had the chance to see the Royals go to the World Series before. He’s been a fan of this team going back to 2011, maybe even 2010, and in all that time he’s had nothing but misery, year after year after year after… actually, just those three years. The stakes are so incredibly high for him; unless you’ve been in his situation—that is to say, unless you’re a kid of the same age from Anaheim, Oakland, Houston, Toronto, Atlanta, Milwaukee, Chicago, Los Angeles, Tampa Bay, Arizona, Washington D.C., Cleveland, Seattle, Miami, Queens, Baltimore, San Diego, Philadelphia, Pittsburgh, Cincinnati, Denver, Minneapolis/St. Paul, a different part of Chicago, or the Bronx—you can’t possibly know the agony this kid feels watching a 3-1 pitch to the second batter in the first inning be ruled a strike.

But the real tragedy of living such a long life without postseason baseball: Nobody ever taught these fans the proper way to wave a rally towel.

The kid on the bottom right is going straight up and down, like a schoolbus windshield wiper. Next to him is a windmiller. Over on the left side, a girl appears to have broken her towel. Pan out and you see towel shakers, towel loopers, towel pompommers, towel speed freaks. Only two right ways to do this, folks: You spin it around your head parallel to the ground with a quick wrist action, or you wing it front to back to front to back to front to back, all at the exact speed of Andrew W.K.’s "I Get Wet."

6. But their High-Fiving game is on point

This is really an incredible display of high-fiving:

I’ve watched this about 40 times, and there are no fewer than 30 high fives, without a single person left hanging or a single awkward miss, unless we count the dude at the bottom right who makes an impromptu decision to switch from high-fiving to fist-bumping. The Kansas City high-five is notable for its gentleness. There’s a lot of placing hands together. Imagine we lived in a world where, instead of high-fiving, we bumped bellies. We would have to be much gentler with each other, lest weight differences, height differences, and human error lead to all sorts of injurious stumbling and toppling. Kansas City high-fives like they’re belly bumping. It’s pretty neat.

These guys are neat.

You need to be logged in to comment. Login or Subscribe
lipitorkid
Back in the saddle again. I am ever so happy that I didn't have to look at 15 pictures of Cardinal fans politely clapping after a Giants player almost did something well.
Reply to lipitorkid
davewoody12
Sam, you're my favorite baseball writer. Somehow I had missed that Giants piece from two years ago. These are both treasures and you are a master.
Reply to davewoody12
belewfripp
How much more awesome would that guy's shirt be if it said:

9 Years
3 Wives
1 Dog
29 Kids
0 STDs
Reply to belewfripp
leh1935
Harold Reynolds told us during game one that Michael Morse
hit 40 HR's as a minor league shortstop when he was in the
Mariners farm system. That is absolutely false. See Baseball
America Super Register,2014, p. 425
Reply to leh1935
jfranco77
Their forearms and hands are finely tuned from hoisting mountains of BBQ... which also helps to raise their high-five game.
Reply to jfranco77