We alluded to some metrics in the series preview, but let's fiddle with the Play Index at Baseball-Reference and talk about what it means when Jarrod Dyson comes in to the game around the seventh inning. Lorenzo Cain moves to right, Dyson plays in center, and Alex Gordon rounds out the group. Here’s the 135-game proration of each player’s defensive runs saved at those specific positions:

Now, we’re realistic. We know defensive metrics are unreliable in a season, or a half season, or (as in the case of Cain in right field) a third of a season. We could do the regressing, and if we were super serious about this, we would right now. But there’s pretty good reason to take those numbers above seriously, without regressing:

So: Can we do better than that? My first thought was the 1987 Angels outfield, which had Gary Pettis and Devon White—two of the dozen or so center fielders who might plausibly claim to be the best of all-time. But they were rounded out by Jack Howell, an unspeedy converted corner infielder playing his first (and last) season in the outfield. Even if he was average, it probably rules this group out.

My second thought was the same turf, but 25 years later, when a brand-new Mike Trout and a not-new Torii Hunter flanked Peter Bourjos. Hunter was 36, which might make this unlikely, but just a year earlier he was basically still a league-average center fielder, and his arm hadn’t aged a bit, so +15 doesn’t seem unrealistic. It’s a really, really strong group. It grades out to +59.

The 2012 Angels outfield is one of only 32 in history that had three +10 outfielders. (That’s over the course of a season, so conceivable that not all of those 32 had the three outfielders on the field at the same time.) The 2014 Royals, of course, are another one (as are the 2013 Royals). Half as many if you raise the minimum to +12, including last year’s Diamondbacks (Ross/Pollock/Parra) +78 and last year’s Brewers (Schafer, Gomez, Aoki). The Diamondbacks, in that alignment, measured out to +78, prorated over the entire year; while the Brewers were +75. Of course, here we get to the problem of “accepting” the Royals’ stats, despite knowing we don’t have enough data: In the Diamondbacks and Brewers’ cases, I scoff and say that those are sample-size issues, that those were great defenses but not the best. Non-rigorous examination of loose stats is an invitation to cheat. So we’ll just go ahead and stop here, appreciating that the Royals’ outfield defense is bananas.

In a 4-4 tie, the Orioles put two one with one out in the seventh, just after Dyson had entered. Nelson Cruz hit a week line-drive single to left field, softly enough that Gordon really had to charge it. Nick Markakis was the lead runner, and as he rounded third it seemed realistic that he would be sent… but, with Gordon charging, third-base coach Bobby Dickerson threw his hands up.

With dozens of outfielders, I’d have been surprised that they held him, even with one out. But Gordon charges the ball like a third baseman, and his arm is strong and accurate: In the past four years he has finished first, first, second and 11th in outfield assists in the American League.

Look at this single, also hit by Nelson Cruz, earlier in the year: 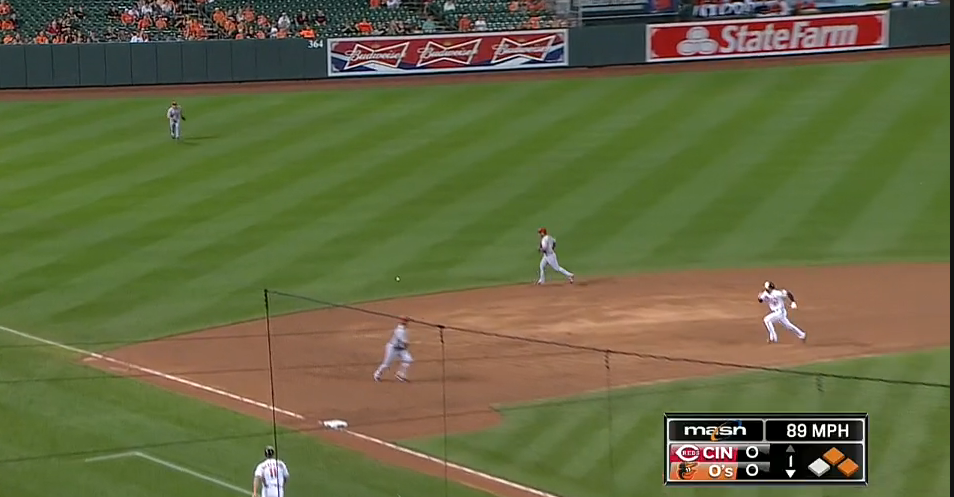 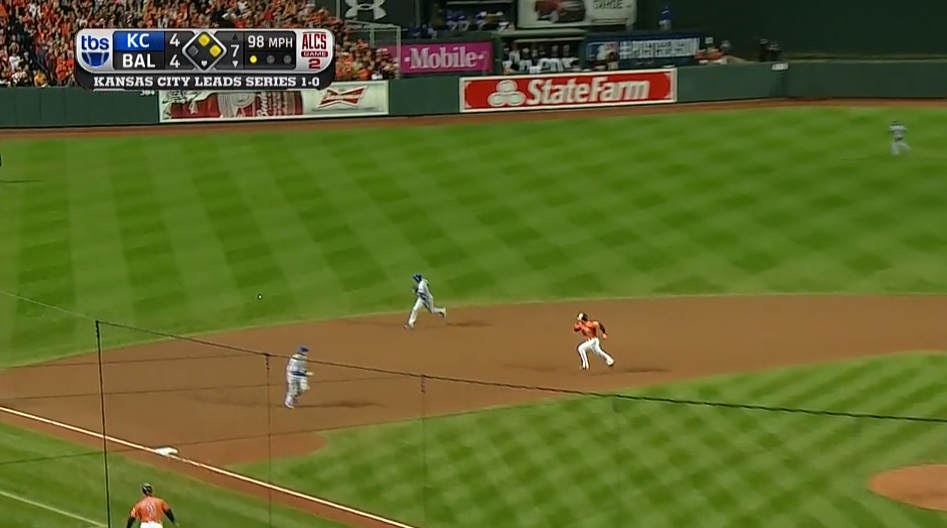 Each ball takes about 3.75 seconds to get to the outfielder, maybe a tenth of a second less for the Gordon one. But in the top one, Markakis scores without a throw. In the other, he holds up. That's what good defense do.

After Steve Pearce flied out to shallow left (again, Gordon, but I don’t think Markakis would have tested Juan Pierre or Johnny Damon on a fly ball to that spot), J.J. Hardy lined, blooped, flared, whatever you want to call it, to the right field line. Cain caught it.

If he comes up short, two runs score. If he whiffs on it, three do. The Orioles probably win.

So that’s defense. It kept the go-ahead run anchored to third. Then it ended an inning. “And another rally dies in the glove of Lorenzo Cain,” Ernie Johnson said, in his best call of the postseason. And this is the really crazy thing: I didn’t even show you the highlights. Okay, Cain’s catch is up on the highlights page, but for impact as much as aesthetics. There were highlight plays. There are in every game. This is one of them:

It was another round of second- (and first-) guessing Ned Yost. None of the moves seemed too egregious, and, naturally, they all worked out in the end. What else do you expect at this point?

*He left Yordano Ventura in for the fifth inning, though Ventura looked wobbly and quickly got into trouble, allowing the tying run. But there were some factors—his bullpen couldn’t get extended too far, after two-inning stints by Wade Davis and Kelvin Herrera the night before—and if Yost regretted the move based on the outcome, he sure as heck didn’t show it: Ventura was back out there in the sixth inning, too. Further, the results don’t necessarily validate the criticism: Ventura allowed one hard hit, but the other one was blooped the other way, and the run scored because a one-out groundout wasn’t hit hard enough for the Royals infield to turn a double play. (Results aren’t needed to validate criticism. I’m pretty much always in favor of pulling the starter more quickly than managers do, and this is a strong case. But I also was mad that Yost left Ventura in for the sixth inning in his previous start. Ventura ended up going seven and looked dominant in the final frame.)

*Then he pulled Brandon Finnegan in the seventh so that Herrera could pitch “his” inning, even though two lefties were starting the inning. This would have been second-guessed based on the platoon advantage alone, but was mocked because of Yost’s previous “his inning” comments about bullpen roles. Not really mockable. Yost thinks Herrera is a much better, more reliable pitcher than Finnegan. At this point in Finnegan’s career, that’s a scouting question more than one we can answer with our stats. Finnegan hasn’t dominated in the postseason. I can see why Yost would consider his security blanket more secure.

*Finally, he bunted with Mike Moustakas in the ninth, against Zach Britton. Give him credit here for not falling in love with Moustakas’ hot hand. It would be easy to let his new slugger aim for the bleachers, but Moustakas has never hit lefties and has, for most of his career, not hit anybody. Bunting with Moustakas in the ninth: Cool with me. Bunting with Terrance Gore on first base? That’s tougher. Gore doesn’t seem to have any problem stealing second base, and if he could then a bunt gets him to third. Instead, the Royals seemed to want the reverse order; Bunt, then steal third, when Britton’s left-handedness wouldn’t be so threatening. As Andy McCullough tweeted: Shrug. I’d like to see Gore steal, all the time. I think he could steal on the catcher’s throw back to the pitcher. I’d tell him to run and not stop until he’s back in the dugout. But, sure: Shrug. Maybe wasn’t worth the risk. Had he been thrown out, a much different ninth inning.

You need to be logged in to comment. Login or Subscribe
jfmoguls
Wonderful games, enjoyable article. Hard to root AGAINST either of these teams but you have got to love these Royals.
Reply to jfmoguls
lichtman
Sam you are an excellent writer and analyst, but you need to resist the temptation of mainstream BS.

Yes, in your next sentence you downplay that statement, by why include it at all? You lose all credibility in my book when you write things like that. The results have NOTHING to do with the decision in a sample size of one (nothing = .000001). If a pitcher is .3 runs worse than he was before, or even .7, there is zero chance that you can tell that from the results of one inning. Zero (.000001). I am 99.9999% sure that you know that, so...
Reply to lichtman
lyricalkiller
You're right! And thank you for saying the nice thing at the front.

I write a little fast, so sometimes I forget to explain why I'm saying something, but in this case I was responding to what I saw as people (smart people, even) doing the "I told you so" move after Ventura gave up the run. The "I told you so" move is always wrong (for the reasons you stated), but in this case specifically was also wrong wrong, in that it didn't seem to accurately reflect what had actually happened. So that's what I was getting at. Anyway, you're right.
Reply to lyricalkiller
lichtman
It is extremely refreshing for you to be open to that kind of criticism.

If we (analysts, critical thinkers, etc.) in any way, shape or form distort or misrepresent the truth in attempt to be politically correct or cow down to the mainstream crowd, we are left with nothing. Because really, all we have is the truth on our side - and that is no small thing. We are not always right, by a long shot, but we always strive to be (intellectually) honest.
Reply to lichtman
lichtman
Mainstream blown saves?
Reply to lichtman
jjpzebra
How did the A's outfield of Rickey Henderson, Tony Armas and Dwayne Murphy compare in the 80's? That was recognized, as I remember, as one of the best of the times.

John
Reply to jjpzebra
lyricalkiller
Very strong! B-Ref rates them +53 at their respective positions, but of course it's a different metric and the error bars on this whole conversation are huge. That trio could very easily challenge the Royals.
Reply to lyricalkiller