Anyone know of current research on #MLB player performance in day games *after* night games since the amphetamine ban took effect?

MLB formally banned (well… they started testing for) amphetamines in the 2007 season, so I took all regular season games that took place between 2003 and 2013. That should give us plenty of space on either side of the ban.

The great asymmetry in a day game after a night game (Jacob suggested DGANG as an abbreviation) is that the hitters in the game played the night before, while the starting pitchers were both likely explicitly given the night off, sent home early, and told to rest up. The manager does sometimes rotate in a bench player or two during the day game (more on that in a bit), but it’s likely that the starter is fresh while most of the lineup he’s facing has that not-so-fresh feeling.

Once again, I went to my trusty log-odds ratio method to control for our expectations of each batter/pitcher matchup. For those unfamiliar, it’s a way of controlling for the fact that we know that some matchups (Rob Deer vs. Roger Clemens) are more likely to result in a strikeout than others. I looked at the major outcomes for a plate appearance (strikeout, walk, HBP, single, double/triple. HR, and out in play). So, all of these findings control for the talent level of the batter and pitcher in each plate appearance.

How big is the DGANG effect? Well, in general, hitters in DGANGs show an increase in strikeouts and outs in play and a drop in singles, doubles, triples, although the shifts were in the range of a few tenths of a percentage point above (or below) expectations, enough to drive overall OBP down by 6-7 points. (All of these analyses were using binary logit regression at the plate appearance level.)

But did the ban on amphetamines make a difference? To get at that, I selected only plate appearances in DGANGs in which the batter was facing a starter (relievers may have thrown the night before, the starter almost certainly did not). I controlled for batter-pitcher matchup (min 250 PA in that season for both), the starter’s pitch count, whether there were runners on, and whether the pitcher had a platoon advantage. I also looked to see whether the hitter in the day game had been in the starting lineup last night. Maybe a fresh player has an advantage. I also coded whether the plate appearance took place in a year before the testing program went into effect (2003-2006) or after (2007-2013).

The results were that players who had started the night before were indeed at a disadvantage that players who were rotated into the lineup were not. Walks and strikeouts were unaffected, but hits of all stripes (singles, doubles, home runs) went down and outs in play went up, again in modest amounts, but enough to register. However, the ban itself seemed to have no effect on performance in DGANGs, either by itself or as an interaction term with “started yesterday.”

This suggests that the real culprit behind sluggish performance in DGANGs is that it’s really hard to play one night and then the next day. The amphetamine ban didn’t seem to make a difference.

What’s interesting to note is that over time, teams have had to deal with more DGANGs. Most teams do play Friday night games and Sunday home games. Roughly half of all Saturday games are played during the day, which means that either the Saturday or Sunday game a DGANG. But more recently, there’s been an upswing in mid-week DGANGs on getaway days. Here’s the percentage of games that were DGANGs over the years. 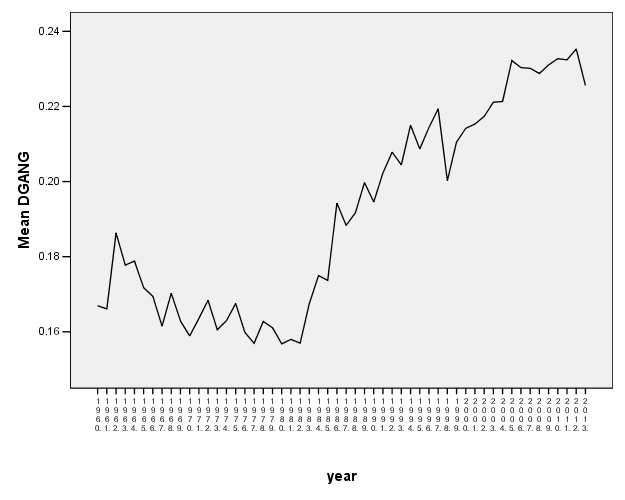 Also, managers are getting more savvy to the need to rotate the squad a little bit. Traditionally teams change catchers for a day game after a night game, but it seems that managers are more likely to switch a couple guys out than they once were. This is a graph showing how many players managers, on average, returned to the starting lineup from game to game. The blue line is games that are not DGANGs (but that did take place the next day) vs. the green line which is DGANGs. This shows only games played in NL parks, because the AL one bends sharply upward in 1973 with the introduction of the DH. We can see that over time, managers have turned more of their lineup over in DGANGs, likely in an attempt to foil the DGANG penalty. 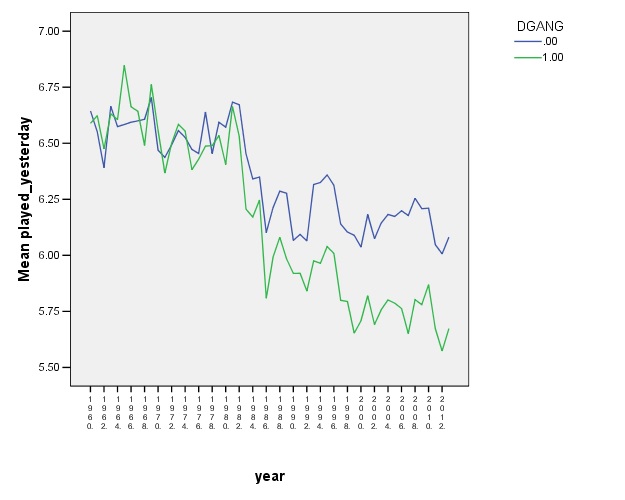 The reason that players struggle in DGANGs in general is fairly obvious. They’re tired. Baseball is a grind, and their biological clocks are all tuned to start games at 7:00 pm. In 2013, DGANGs averaged 8.1 runs per game (both teams) and all other games averaged 8.4 runs. The hitters are lagging a bit.

On the issue of amphetamines, why aren’t we seeing any effect of the ban? Surely, one way that some players used to grab a little extra energy before a DGANG was to pop a little green pill. With the threat of being tested, that particular strategy has probably been curtailed. So what happened? Why aren’t we seeing a larger effect if the players had their chemical coping mechanism taken away?

I can think of a few possible answers:

· Amphetamine usage was much more akin to high school bragging. Everyone thought everyone else was doing it but in reality, few actually were.

· Amphetamines didn’t actually help players to perform better back in the day. Players just thought that they did.

· Reports of huge numbers of therapeutic use exemptions mean that players didn’t stop using, they just got doctor’s notes for it.

· Players switched to substances which are legal, such as caffeine, albeit probably in rather large doses. There are probably a lot of Red Bull and Monster cans in the recycling bin in your average MLB locker room, especially at 1:30 pm on Sunday.

· Players all took a DARE course, realized that drugs were bad, m’kay, and learned how to use positivity to solve their problems.

The answer might be as simple as saying that players weren’t even using amphetamines as performance enhancers as they were simply just trying to stay awake. The problem with using amphetamines is that while they give you energy, they turn just about everything in the body into “on” mode. The body isn’t made to process that much activity. You’re basically swapping one problem for another at that point.

Maybe the answer is just having a deeper bench. If more than 20 percent of games are going to be DGANGs, then having a 10th and 11th man who are actually worth playing (in addition to the backup catcher) means that teams can rotate guys in a bit better. The drain in performance team-wide appears to be about 5 runs over the course of a season (20 percent of 162, teams scoring about 0.15 runs per game less in DGANGs), but every little bit helps.

You need to be logged in to comment. Login or Subscribe
Michael
Terrific work. Thanks.
Reply to Michael
Richie
Yup, agreed, thank you!
Reply to Richie
jroegele
Great work Russell.

It made me think about a couple of things:

(1) The more DGANGs there are, perhaps the more rewarded deeper teams will be that can swap out players with fresh ones the following day. It also makes me think there is some value in following up a RHP in a night game with a RHP in the day game (or LHP/LHP), so that teams with platoons can't get the easy switch in the DGANG.

(2) I wonder if there would be a difference if you separated getaway DGANGs from the others? I suppose "the others" are general Saturday afternoon games, and some Wrigley Field games. I think it was Bill James a couple of years ago that looked at getaway day performance of umpires, and noticed they called a more generous zone, IIRC. So I wonder how much that would have to do with the increased strikeouts/lower run environment.

I have not been reading nearly enough baseball research in the last stretch of my life, but I'm glad to be back and to read your work again Russell!