A pitcher’s duel this was not. Early on, Clayton Kershaw looked like the eventual Cy Young and MVP winner we all expected coming into the game. He gave up a solo homer to Randal Grichuk on his seventh pitch of the game; then gave up nothing until another solo shot, this one to Matt Carpenter, in the sixth. Then the seventh happened.

But wait, I’m getting ahead of myself. There was another ace who wasn’t too ace-like before Kershaw fell apart. Unlike Kershaw, Adam Wainwright seemed off from the get-go. He allowed two baserunners in the both the first and second, wriggling out of both jams in different fashions. Wainwright use a little luck in the first (Hanley Ramirez ripped a liner right at Matt Carpenter to end the inning) and in the second, he showed that even when he’s off, he can still flash some nasty, getting Dee Gordon to whiff on a nasty curve to end that threat.

Wainwright, seemed to be battling his command the entire outing, sometimes snapping off that devastating curve we’ve all grown accustomed to and other times missing his location, and the Dodgers took advantage of those mistakes starting in the third.

After Wainwright hit Puig to start the third (which kicked off a minor dust-up between Yadier Molina and Adrian Gonzalez, but that’s probably long forgotten after this epic outing), things really started going the Dodgers way. They scored two in that inning and in each of the next two, building a 6-1 lead.

It appeared that they were cruising along to an easy victory with Kershaw on the mound. But, the seventh, what the hell was that about? Listen, I’d prefer not to imitate the mayor of St. Louis and reference Anchorman, but, yeah, that escalated quickly.

It started with four straight singles, a strikeout, another single and a strikeout of Oscar Taveras, an at-bat in which the certain Cy Young winner just overmatched the talented rookie. At this point, it’s a 6-4 game and most probably feel like Kershaw has righted any wrongs that may have been ailing him to start the inning. He quickly went up 0-2 on Carpenter, but the then the darnedest thing happened, Carpenter just refused to be put away. He refused to offer at sliders out of the zone. He fouled off some fastballs. Then, on the eighth pitch of the at-bat, he ripped a ball to right that one-hopped the fence and put the Cardinals up 7-6.

During the entire at-bat, two of the broadcasters, Harold Reynolds and Tom Verducci, suggested that the Cardinals must be stealing signs because they were just on top of Kershaw’s pitches too well. I mean, it’s Kershaw, so if you’re consistently making solid contact off him, you must be cheating, right? Well, according to one former ballplayer, this wasn’t anything nefarious by the Cardinals, but perhaps just good scouting.

I promise you the #Cardinals has @ClaytonKersh22 pitches out of the stretch!!! Same as last years championship series.

@Ken_Rosenthal baseball is now who scouts and processes the info the best. @ClaytonKersh22 tips out of the stretch, #Cardinals didn't forget

The Cardinals did put seven runs on the board off Kershaw in last year’s NLCS, but that was on three days of rest, and after he’d tossed six innings of two-hit, one-run ball. But maybe that’s the point, Kershaw barely had to throw out of the stretch in that first game and according to Anderson, that’s when he’s vulnerable. My guess is, even if the Cardinals are seeing something we haven’t identified yet, they’re not going to share it with the rest of us anytime soon.

You could possibly make the argument that Don Mattingly should have gone to his bullpen earlier than he did in the sixth. But I don’t see the rationale there. After the first three men reached, Kershaw went on to face five more batters, four of whom bat from the left side. Would anyone really prefer J.P. Howell or Scott Elbert in that situation over Kershaw, considering Kershaw had just 81 pitches entering the inning and had barely broken a sweat to that point? You certainly don’t consider pulling him after he’s retired Kozma and Jay on strikes and is facing Carpenter with two down.

After Carpenter’s huge at-bat, Pedro Baez relieved Kershaw, walking the first batter he faced, then promptly gave up a three-run, no-doubter to Matt Holliday – three runs that would certainly look big a few innings later. Suddenly St. Louis, staring at a four-run deficit just a half-inning ago, hold a four-run lead of their own.

The Dodgers didn’t quit. After Baez’s initial struggles, the bullpen shut the Cardinals the rest of the way and the Dodgers chipped away at the lead, climbing to within one run and setting up the second-best at-bat of the game. Puig stepped in with two down and the score 10-9 in the ninth against Trevor Rosenthal. Rosenthal leans on his four-seamer (using it 76.53% of the time this season) and he wasn’t going away from it against Puig, and, in a limited sample, that’s certainly not the worst strategy against Puig if you’re going to keep it up and away. 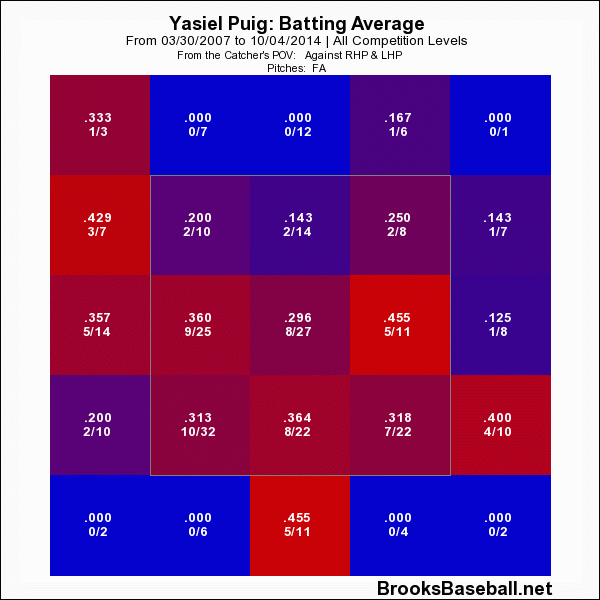 Rosenthal pumped seven straight fastballs to Puig, all 99-100 mph. Puig stayed alive for as long as he could, but eventually, Rosenthal placed one exactly where he wanted it and ended the battle and the game.

This game pretty much went nothing like anybody expected. Even A.J. Ellis had four hits on the evening. For the Game One preview I wrote, “The Dodgers have a balanced attack up and down the lineup, with their weakest bat, A.J. Ellis, getting on base above a league-average level (but doing little else at the plate).” So pretty much he trolled me once by accumulating four knocks, then trolled me again by picking Taylor Swift as his walk-up music. Though, technically, it appears his daughter chose the song, and, admittedly, Swift is starting to win me over, especially after this.

To recap: The Dodgers scored nine runs in a Kershaw start and lost, A.J. Ellis had four hits and I kinda like Taylor Swift now. So, indeed, the whole world has gone crazy. Regardless, the Dodgers shouldn’t hang their heads, that was certainly a shocking loss, but they have Greinke going on Saturday, the better offense and, if need be, Kershaw ready to go and looking to prove something in a Game Five. It’s hardly time to panic for Los Angeles. Expect them to shake it off.