So it was a moment of surprise to see this in a recent start:

Not only does he eschew the twist; he cuts out the entire middle part of his windup. It’s like Cueto is a film editor and he just decides to snip frames 30 through 64 from the reel. You could see how that would be awfully disconcerting if you were the hitter.

Now: Did that sudden variation do anything to help Cueto? Again, don’t know, it’s complicated, but the brain does what it does, so part of me instinctively assumes it does. This instinct is especially strong when watching Cueto. Just as we all love the idea that losing one sense enhances all the other senses, there are certain players for whom physical limitations probably inspire extra attention to the little things that player does. If he’s an Ecksteiny infielder, we obsess over his hustle. If he’s an overweight “professional hitter," we focus on his preparation. If he’s an ace without ace-like velocity, we assign him scheminess. If he’s a catcher who can’t hit, we credit him with leadership. And if he’s Johnny Cueto, we—or at least I—can’t help but notice how many unusual things he does to make up for his diminutive stature. None of these conclusions is necessarily wrong. With Cueto, it’s worth looking at those unusual things both to see whether they’re actual tendencies and just so we can appreciate them.

So, let’s play Myth or Muster:

Tweaking his motion
It’s not something he does regularly—in the following start, this past Tuesday, he didn’t do it at all against the Cubs, and a quick Ask Jeeves search of Johnny Cueto +Quick Pitch turns up nothing. But in the September 11th game against the Cardinals, the one from which the GIFs above come, he slipped into it no fewer than five times. The most obvious example of it paying off came against Oscar Taveras:

Taveras does seem to be caught off guard, and the result is a bit of a wild, hurried leg lift; he’s actually ahead of Cueto’s motion because he’s trying to catch up, a sort of baseball version of global warming causing extreme winters. Here’s his quick pitch swing on the left, with a typical swing against a typical pitching motion earlier in the game on the right: 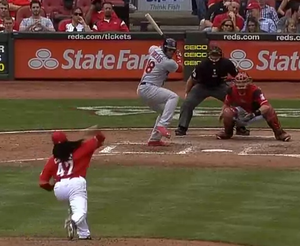 If Cueto didn’t use the sped-up motion in the following game, he did make a slight, subtle deviation when he was pitching from the stretch with the bases loaded.

The GIF on top is his “normal” pace during that inning. On bottom, he gives a little tug back, almost like he’s feigning a throw over to third base for a brief moment, and adds about a quarter-second to his delivery.

Myth or Muster? Muster! It’s clearly something he plays with, though only rarely and to uncertain accomplishment. This fits with Cueto’s general M.O., which is to screw with the clock when he can. For instance…

Messing with time, generally
Cueto is one of the league’s faster workers, but his place about a third of the way down the leaderboard is actually deceptive. That’s because, while he does generally deliver pitches quickly, he often takes his time, even when no runners are on base, and even when there’s no clear external cause for him to dawdle.

I charted two of his games, noting how long it took for him to deliver a pitch after receiving the ball from the catcher. In many cases, it was pushing the limits of the game’s clock: He would deliver pitches seven, eight seconds after receiving the ball. When he gets a new ball, after a pitch in the dirt or a foul ball, he never rubs it up—just takes it, wipes the bill of his hat (hmm), looks in for the sign, ready to go. So it’s fast, fast, fast, and then…suddenly for a pitch or two, very slow. For instance, this sequence in the fifth inning of the September 11th game, all times rounded (and unofficial, and for obvious reasons excluding the first pitch of an at-bat):

To give you a sense of what his dawdling looks like, here's the middle portion of the 27-second gap—and keep in mind, there's another 14 seconds that isn't in this clip—in which he’s facing the opposing pitcher, up in the count 1-2, with nobody on base:

That thing he does where he starts his windup and then abruptly stops, and makes the catcher recycle through the signs? I’d bet he does that specific move more than any pitcher in the sport. That’s his personal catcher, by the way.

So that’s my take from charting two games. Any evidence of this?

Yes! The numbers totally back it up. Of the 154 pitchers who topped our 700-pitch threshold, Cueto had the third-highest standard deviation for his pace of pitching. In other words, there is more variation in how much time he takes between pitches than almost any pitcher in the game. This is just for when the bases are empty, so it has nothing to do with Cueto’s control of the running game.

Myth or Muster? Muster! I wouldn’t begin to say how much it matters, but it’s clearly something Cueto believes helps him make the batter uncomfortable and helps him control the pace of the game.

Schoolmarming potential base thieves
When runners are on base, he does a better job disrupting the runners’ timing than perhaps any pitcher in the game. (His time between pitches with runners on also had the third highest standard deviation in the game, incidentally.) R.J. Anderson has written multiple times about Cueto’s ability to hold runners, noting that Cueto utilizes the (illegal) “knee-pop” move, and highlighting his singular ability to stop Dee Gordon from going:

All the while, Cueto is altering his timing and looks. He's holding the ball longer, taking an extra look, and doing everything he can to keep Gordon, who keeps creeping toward second base, from getting a read on an obvious pattern. In the end, Cueto wins.

What’s interesting about this is that a smart pitcher can go either way on basestealers. Cueto and Clayton Kershaw and Yordano Ventura develop persuasive anti-steal tactics and keep the rare baserunners they allow anchored. Greg Maddux, meanwhile—Cueto’s no. 1 PECOTA comp this year, by the way, and not one of those lousy Maddux years, but 1994 Maddux—always figured it wasn’t worth the bother paying attention to baserunners. In his entire career, Cueto has allowed just 22 stolen bases, and thieves have only a 39 percent success rate. Maddux allowed more than 22 stolen bases in 15 of his seasons, and baserunners succeeded 76 percent of the time. In the next season or two, Cueto will pass Maddux’s career pickoffs total.

Stupid slow curve
Can’t develop a reputation as a creative/cerebral pitcher without a gimmicky slow curveball, so we can probably say Johnny Cueto has arrived: He threw his first slow curveball ever against the Mets this month,

and followed it up with a 60-mph curve against the Cubs in his last start. It’s not a weapon.

Myth or Muster: Myth, for now.

Obviously, none of these gimmicks is the reason he’s so good this year. Similarly, the windup is probably not the reason he’s so good this year. As Thorburn noted two years ago, “One might expect such an exaggerated coil to precipitate a giant burst of momentum, but Cueto reaps no such advantage…. The big twist might help Johnny C to find his timing signature while paying homage to Fernando Valenzuela and his parietal eye, but the benefits are likely more psychological than they are mechanically functional.” In a fine profile of Cueto this spring, Jerry Crasnick credited the twist with helping Cueto’s timing, throwing off the batters’, and creating a disorienting view of his release point.

No, none of these quirks, crafts, or tactics would go as far explaining Cueto’s success as, say, the way he has incorporated a cutter this year, introducing a fourth velocity band to his repertoire; or the way that this year he has become a high-ball pitcher, turning his four-seamer into a swing-and-miss pitch; or just generally that he can throw 94 with command.

But the quirks aren’t just fun; they’re the outward expression of a pitcher who is very intentional in what he does, and who doesn’t miss a chance to gain an advantage. Other than the 94 and the command, that might be the best trait you could ask for in a pitcher.

You need to be logged in to comment. Login or Subscribe
maphal
Great work, Sam. Johnny and Bryan Price came up with the twisting wind up due to his propensity for flying way open and landing a foot or more to the left of the rubber, as best evidenced on the giant picture of him on the Reds HOF building outside GABP. But he still had to learn to become a pitcher, instead of just the 95 MPH thrower he was when he arrived in 2008.

Johnny is the Reds best starter since...(Soto, Rijo?), but the Reds will need to consider trading him with heavy hearts this offseason. He'll justifiably want $125-150m after 2015, and the Reds badly need offense and can't afford yet another post-age 30 contract through 2020.
Reply to maphal