The Indians got trounced in their series opener versus the Tigers on Monday, when Corey Kluber took the hill without his best stuff. That’s never a good idea in a matchup with David Price, but it was merely one loss, and the Tribe had reason to believe that it might even the series on Tuesday.

Kluber has deservedly gotten most of the press for an outstanding breakout campaign, but Carlos Carrasco has quietly emerged as a fine second fiddle since returning to the rotation on August 10th. He’d racked up a 0.73 ERA in four starts to go with a 24:3 K:BB ratio in 24 2/3 innings. J.P. Breen took notice. And the Indians, 3-1 behind the 27-year-old during that span, were reaping the rewards.

Carrasco had electric stuff again last night, so the home team had that going for it. Also this:

Carlos Santana’s two-run blast gave the right-hander an early lead. The Tigers quickly halved it by opening the top of the second with three singles and a walk, but Carrasco wriggled out of the bases-loaded jam with two strikeouts and a groundball to keep his club on top.

He had plenty of whiff-inducing offerings left in the hopper, too. Carrasco fanned the side in the fourth and again in the fifth, thereby navigating 5 1/3 innings of 10-hit ball without squandering the one-run margin. According to the Baseball-Reference Play Index, he joined John Lackey and Curt Schilling as the only starters who’ve given up 10 knocks and recorded 10 punchouts in an outing of 5 1/3 or fewer innings since 1996.

It appears strikeouts were in the air at Progressive Field, though, because Kyle Lobstein wound up with 10 of them in 5 1/3 frames, as well. Despite their fine K totals, both starters needed help in the sixth.

Scott Atchison got Carrasco out of trouble in the top half by coaxing a double-play ball. Then, Blaine Hardy helped Lobstein by retiring Michael Bourn to strand three Indians on base. Hardy nearly created his own mess in the last of the seventh by issuing walks to two of the first three batters in the inning, but Jose Ramirez bailed Hardy out by getting picked off of first before Santana could advance him.

The Indians came within two outs of getting away with those missed opportunities. They had their closer on the bump with a chance to square the series.

But their closer had no feel for either of his pitches.

He walked Torii Hunter on seven fastballs and a curveball that stayed chin-high. He threw a first-pitch curveball to Miguel Cabrera that … well, see if you can spot it. See that light-orange square just above the “t” in Location? Yup, that’s it. Allen threw another curve to Cabrera and found the dirt again. Three pitches after the second bad breaker, Cabrera singled and Hunter moved up to second.

Victor Martinez flied out, giving Allen and the Cleveland crowd a shred of hope. J.D. Martinez stepped to the plate.

The first pitch to Martinez? You guessed it: another curve in the dirt. By that point, there was no reason for the outfielder not to sit dead red. And the 27-year-old Martinez likes sitting dead red:

Ten of Martinez’s 18 homers on the season entering play on Tuesday had come on right-handers' heaters. Allen probably knew that, given that he chose to pitch him backward. But with no command of his breaking ball, he had no choice but to fire one at 96 mph and hope for the best.

Instead, the worst happened: a three-run walk-off bomb, just to the right of center field.

And just like that, the Indians—who seemed to be on the doorstep of contention when they came within a rain shower of sweeping the first-place Royals over the weekend—are five games out again.

The Red Sox beat the Yankees 9-4 last night. Daniel Nava, Xander Bogaerts, and Mookie Betts homered for the visitors. Martin Prado and Brian McCann homered for the home nine, and Prado left the game with an injured hamstring. Joe Kelly got his first win in a Boston uniform. Brett Gardner was ejected for arguing balls and strikes in the fifth inning.

All of those are facts about the series opener in the Bronx. Here’s another fact about it:

we had a statistical oddity tonite. the Yankees did not have an assist. one groundball out to first base in the 3rd, it was unassisted

Lest you question that, it comes from the man who’d know better than anyone: the official scorer.

And lest you think it’s a once-in-a-lifetime rarity, our own Andrew Koo dug into the database and found that it happened earlier this year. Only a month ago, in fact. And the Red Sox were responsible for that assist-free showing, too!

Those are the only two occasions on which a team has done it since at least 2011.

Cory Spangenberg hit a grand total of two home runs in 337 minor-league plate appearances this year. He picked a good time for his first one in the majors:

Diamondbacks righty Brad Ziegler left a sinker up in the zone, and Spangenberg, pinch-hitting for Cameron Maybin, cranked it over the right-field wall to walk off the Friars with a 2-1 win.

As the rookie and his teammates celebrated, Ziegler took the walk of shame back to the visitors’ dugout with a mounting list of failures likely weighing on his mind. The submariner has now allowed at least one run in 11 of his last 19 appearances. His ERA over that 20 2/3–inning stretch is 6.53. His opponents are rocking an OPS over .900.

Darren O’Day served up a grand slam to Jay Bruce, which saddled him with a career-high four runs. On the bright side, the Orioles went on to win 5-4, extending their American League East lead to 9 1/2 games, and the clunker merely raised O’Day’s ERA for the season to 1.34.

Remember when the Phillies couldn’t stop getting shut out? Now, they can’t stop blanking the Braves.

On the heels of Monday’s combined no-hitter, the first in franchise history, Ryne Sandberg’s pitching staff teamed up for a three-hitter in a 3-0 victory at Turner Field. Jason Heyward stole three bases on Monday and doubled twice on Tuesday. It didn’t matter: His teammates, who combined to go 0-for-6 with runners in scoring position, couldn’t bring him home.

Kyle Kendrick logged seven of the run-free frames, and Ken Giles and Antonio Bastardo took care of the rest. Kendrick drilled two and walked two, and even those freebies weren’t enough to jumpstart Fredi Gonzalez’s offense.

It’s the first time the Braves have been held scoreless in back-to-back home games this year, and only the fourth time it’s happened on consecutive days since 1986.

Clayton Kershaw challenged Bryce Harper with a first-pitch fastball in the seventh inning last night, and Harper unloaded on it.

Unfortunately for the Nationals, that’s just about the only thing Kershaw did wrong in his latest masterpiece. Eight innings, three hits, one run, eight strikeouts. Twenty-four first-pitch strikes in 29 tries. Just another day at the office to lower his ERA to 1.70.

Doug Fister kept up with Kershaw until the last of the fifth, when the left-hander decided to help himself. Kershaw led off the frame with a single. The next batter, Dee Gordon, also singled. So there were runners at first and second with nobody out, right? Not quite:

Unlike most pitchers, Kershaw rounded second on the seeing-eye grounder and wound up going first-to-third. With Harper aiming to cut down the oddly aggressive pitcher, Gordon scrambled over to second to put two men in scoring position.

All of that nearly became moot when Hanley Ramirez grounded out. But the next batter, Adrian Gonzalez, also hit a worm-killer to short, this one in the 5.5 hole. Kershaw scored, and as Ian Desmond bobbled the ball, Gordon headed for home. Desmond’s throw … nope:

The Dodgers would go on to win 4-1, with the two insurance tallies coming on a Juan Uribe long ball in the sixth.

Kershaw’s hitting and baserunning ought to put extra feathers in his cap when it comes time for Most Valuable Player voting. Justin Verlander became the first pitcher to be voted MVP in 25 years when he took home the hardware in 2011. And, playing in the junior circuit, Verlander did it without the benefit of a hit, shrewd baserunning play, or run scored. Kershaw, now batting .173 on the year, has all of those on his résumé to go with an ERA that leads all qualifying senior-circuit starters by more than half a run.

The Astros didn’t deploy an extreme shift for Josh Hamilton on Tuesday: 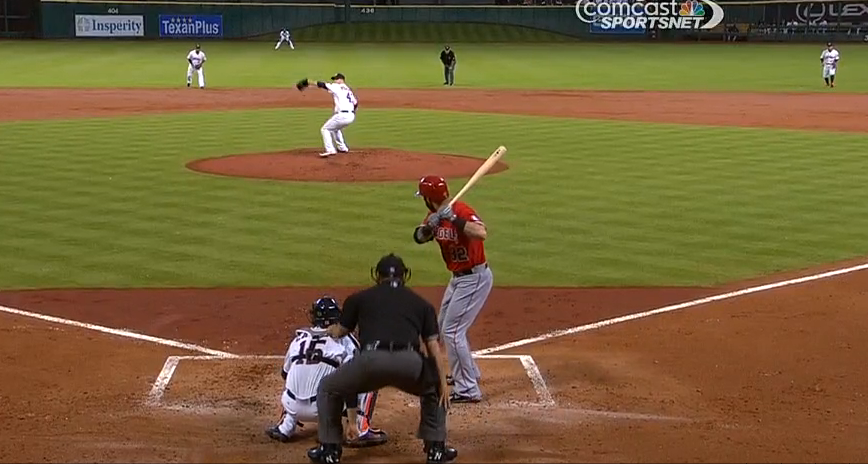 They did, however, deploy Jose Altuve:

After letting the Angels sweep their way to a five-game American League West lead over the weekend, the A’s must—at least for now—concern themselves with the wild-card race, in which the Tigers and Mariners pose the most pressing threats. They split the first two games of the three-game home tilt with the M’s. Now, Bob Melvin’s scuffling lineup has to contend with Felix Hernandez, who gets the ball in a duel with Jon Lester in the series finale at the Coliseum. Enjoy the finest on-paper pitching matchup of the day; the A's marketing department sure does (3:35 p.m. ET).

Marcus Stroman had an up-and-down August, which included a complete game against the Tigers on the ninth, a train wreck against the White Sox on the 15th, and a fine, 7 2/3–inning, one-run outing against the Red Sox on the 27th to wrap it up. The 23-year-old rookie will strive for more consistency in the final month of the season, which begins with a visit to Tropicana Field. He’ll square off with Chris Archer in the last of three games between the East division clubs (7:10 p.m. ET).

Giancarlo Stanton rode the three true outcomes to a terrific August, during which he posted a .289/.431/.567 line over 97 at-bats. His .998 OPS for the month led the National League and was second only to David Ortiz (1.034) among all major leaguers with at least 75 plate appearances during the 31 days. Stanton produced that mark with the help of eight homers, 25 walks, and 36 strikeouts—good for first, first, and third in the senior circuit, respectively—in 123 trips to the box, a 56 percent TTO clip. Tonight, Stanton, who leads the league with 35 jacks, will stare down Jacob deGrom, who’s seen 32.5 percent of the batters he’s faced end up with a long ball, free pass, or punchout. After a rough go in his first start off the disabled list, deGrom held the Phillies to just an unearned run in seven innings in his most recent effort, and he’ll aim for similar results in the matchup with Tom Koehler (7:10 p.m. ET).

You need to be logged in to comment. Login or Subscribe
delatopia
The Dodgers won 4-1, not 4-0. Love the daily recap, very enjoyable.
Reply to delatopia
statsrath
Fixed, thanks!
Reply to statsrath