Before Jose Fernandez's UCL popped, he was enjoying a fantastic sophomore season. He'd tallied nearly twice as many strikeouts as hits allowed, and five times as many strikeouts as walks. He'd surrendered just four home runs, or about one every 13 innings, leaving him with a shiny 2.44 ERA. Yet, for as good as Fernandez's season was, if he qualified he wouldn't lead the Marlins rotation in ERA—that honor would go instead to Henderson Alvarez and his 2.43 mark.

Alvarez, who returned on Saturday after missing two weeks with shoulder inflammation, has turned his career around following his trade to the Marlins the winter before last. Since then, he ranks 12th in ERA+ and 28th in FIP among pitchers with at least 200 innings. Alvarez isn't better than Fernandez—everyone knows that—but he's easy to overlook due to an unusual profile. Compared to other starters, Alvarez has one of the worst strikeout rates, best groundball rates, and quickest fastballs around. He is, in a sense, the ideal Twins pitcher, except with the ideal Marlins pitcher velocity.
.

While Alvarez's status as a seeming paradox—a flamethrower who pitches to contact—makes him tougher to embrace than the normal 24-year-old with this kind of recent success, there are reasons to buy in. Among them is his fastball control. Alvarez throws a lot of strikes in general—his 67 percent strike rate places him alongside other premium arms, such as Felix Hernandez, Stephen Strasburg, and Cole Hamels, according to Baseball-Reference—due in part to a fastball-heavy arsenal that has seen his four-seamer and sinker account for 66 percent of his pitches.

But just as important as Alvarez's fastball control is the broadening of his arsenal. His changeup, well-regarded during his time on the farm, was seldom seen last year. That hasn't been the case in 2014. Instead Alvarez has thrown his cambio a career-high 22 percent of the time. The shift hasn't been lost on him, either— "Thank God this season my changeup has worked and I'm using it as my second pitch," he said earlier in the year.

Alvarez doesn't just use his changeup as his top non-fastball offering—though he'll sprinkle in a slider or slow curve—but also as a capable out pitch against lefties and righties. Thus far in 2014, 32 percent of his two-strike pitches have been changeups, including 26 percent of those coming against right-handed hitters. Prior to this season, changeups made up less than 20 percent of Alvarez's two-strike pitches.

There are no fewer than three things that have made Alvarez's change so effective. First and second are the movement and velocity of the pitch. His changeup is thrown from a circle grip, but comes in hotter than expected—at times it checks in around 90 mph—leaving him without the usual 8-to-10-mph separation from his fastballs. The pitch traces the sinker's path to the plate until the final feet, where it dies of exhaustion. Between the movement and speed, batters have a hard time lifting the ball; consider it no surprise then that Alvarez's changeup has generated a grounder on 65 percent of the occasions it has been put in play (the third-best rate in the league).

Lastly there's the location. The images below compare Alvarez's changeup location this season versus the seasons before. At first glance, there might not be an obvious difference. Look a little closer, namely at the percentages of pitches located down and to the arm side—where pitchers want their changeups for the most part—and the improvement becomes clearer. Alvarez has located his changeup to those four boxes in the bottom left roughly a third of the time; previously, he'd placed his change there at a 23 percent clip. 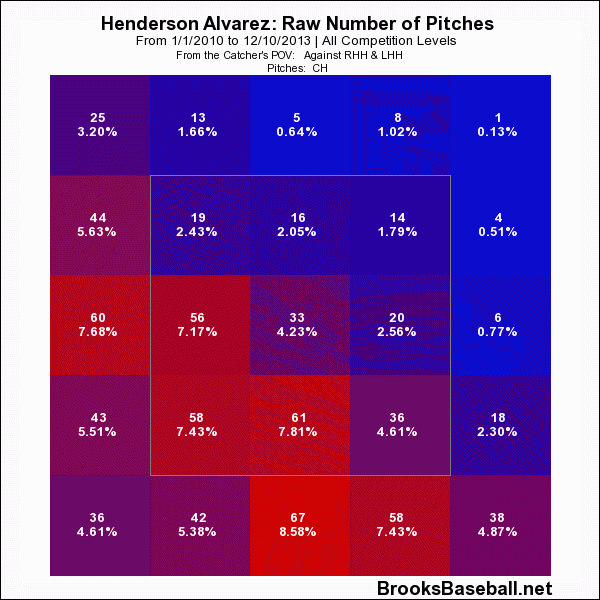 Despite those gains, other criticisms against Alvarez remain valid—he relies too much on his defense, he lacks a high-quality breaking ball, he hasn't topped 180 innings since 2012, and so on. Still, it's worth noting his batting average on balls in play is almost identical to the Marlins' team mark (.303 versus .309). Conversely, his performance on groundballs (.233) is, as expected, better than the team's (.271). The breaking ball and durability concerns are legitimate, but the latter could be altered in time.

Something else that could be altered in time: Alvarez's team. He'll qualify for arbitration after the season, and while that would be a minor blip in most cities, it requires bold letters in Miami, where the Marlins are always budget conscious. Alvarez doesn't figure to make enough coin to force Dan Jennings' hands, but keep him in mind as a potential under-the-radar trade piece this winter.

The good news, for whichever team he pitches for next year and those that follow, is that Alvarez looks like a legitimate middle-of-the-rotation starter who has shown the ability to improve—even if he succeeds with an unorthodox approach.

You need to be logged in to comment. Login or Subscribe
ErikBFlom
Looks like a guy who would benefit from being an Oriole.
Reply to ErikBFlom
Ecrazy
Not to quibble, but if you remove the start where Fernandez actually Tore his UCL, he's numbers are significantly lower.
Reply to Ecrazy
LeafontheWind
That's quibbling.
Reply to LeafontheWind
Ecrazy
Not Really, his ERA was 1.73 before he tore his UCL.
Reply to Ecrazy
HelicopterSunday
"Something else that could be altered in time: Alvarez's team"


I think that could said about the majority of players.
Reply to HelicopterSunday
tomter
Where did you find the data on how Alvarez and the Marlins defended ground balls?
Reply to tomter